As I've mentioned in previous blogs I spent some time in the 1960's and 70's working for the Kent River Authority around Sheppey. Here are some photos showing what I used to get up to. 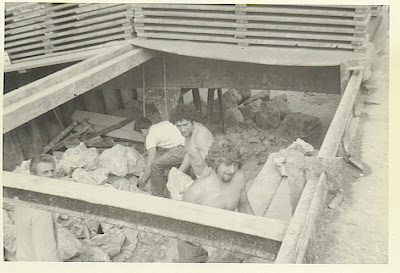 Unloading rocks in 1969. As I've detailed in an earlier blog, ragstone rocks for repairing the seawalls were brought in by sea in a small twin-hatched barge and we unloaded them by hand, throwing them over the side. Here we are just coming to the end of 100 ton of rocks that would have seen both hatches full to the top when we started. I'm the shirtless one nearest the camera with the silly goatee beard. 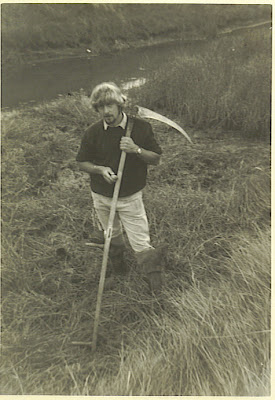 Of all the jobs that we carried out on the KRA this was by far my favourite, scything and cleaning ditches. I prided myself on leaving ditch banks looking as if they'd been mown. Here I'm cutting sea club rush alongside the ditch at Warden Bay and later the cut reed would be raked up and removed. 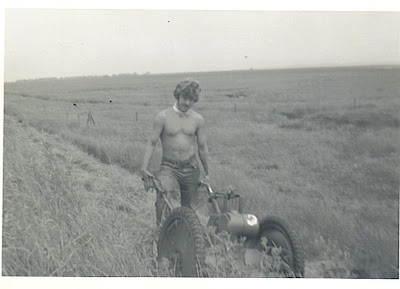 Mowing what is now the seawall of The Swale NNR back in 1970. You can just make out the buildings of Shellness Hamlet on the sky-line in the background. This was in the pre-tractor days and believe it or not we mowed the seawall round the whole of Sheppey in this way. It took about three months and was very hot and hard work. Love to still look I did then but age 23 is now a long time ago. 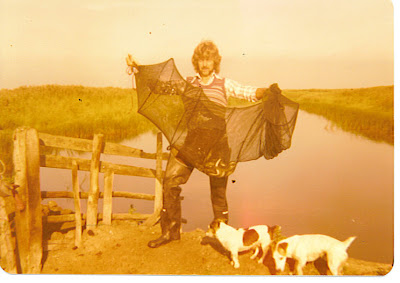 Emptying an eel fyke net at Elmley in 1979. This ditch is now part of The Flood on the RSPB reserve. In those early days of the reserve we were given access twice a week by the warden, to set and empty our nets, as long as we did it out of open hours. Doubt we'd get the same offer these days. 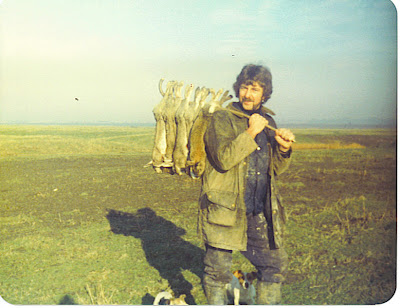 The end of a few hours rabbiting on Elmley RSPB in 1981. There is a glimpse of my two dogs at my feet. We used to spend most Sunday mornings in the winter down at Spitend and Windmill Creek doing this and sometimes Peter Makepeace, the first RSPB warden there, would come out with us.
Posted by Derek Faulkner at 14:43