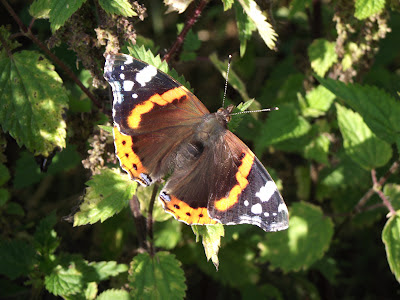 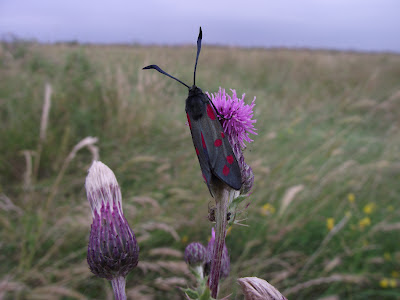 A Red Admiral enjoys the early morning sunshine in the top photograph. And just above and below are three of a huge hatch of Six-Spot Burnet Moths that was taking place on the reserve yesterday morning. We have just one field on the reserve, almost a wild-flower meadow at this time of the year, that is home to a great number of these moths each year. One of the two below has just emerged from the chrysalis below it and was waiting for its wings to fill and straighten prior to flight. 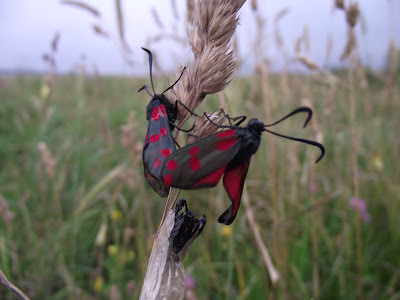 Many of the fields surrounding the reserve have now been harvested and left as stubble or dotted with bales of straw, as a result, with young swallows also on the move, the morning had the look, smell and feel of early autumn. Not at the rear of Harty Church however, here the corn still awaits harvesting and gives the church a really countryside appearance. 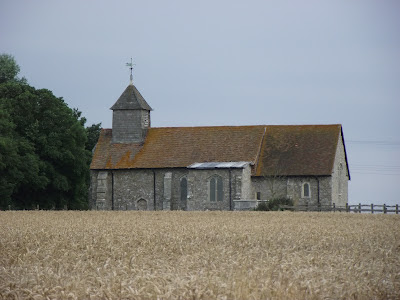 Below the church are some of the reserve's saltings, close to Harty Ferry and opposite the reserve at Oare on the mainland. Here the Sea Lavender was flowering in full purple magnificence, and stretching for some way into the distance, its a superb spectacle at this time of year. 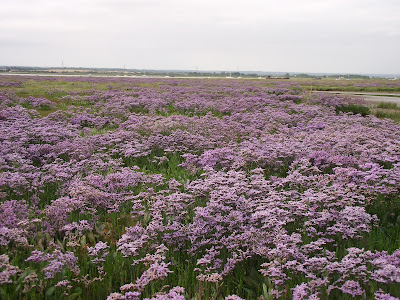 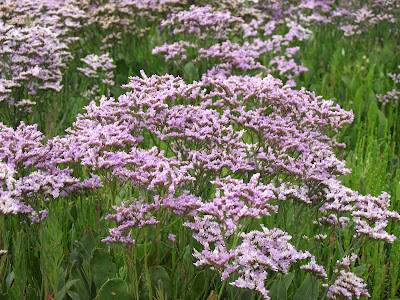 Mid-summer and at long last we have a prolonged spell of hot and sunny weather. The reserve has had an amazing turn round this week as a result of the weather change. On Saturday morning it received six hours heavy rain which left much surface water and re-filled the rills and yet by today it has already returned to dry surfaces and fast drying out rills, such is the strength of the sun.  All round the reserve the farmland is a hive of activity as the farmers are desperately trying to catch up with both hay and rape harvesting at the same time, knowing the wheat isn't far behind as well.
On Monday afternoon we resumed our monthly WEBS counts after stopping them in March, but they didn't produce any spectacular counts, the ducks for instance totaled 4 Mallard and a pair of Tufties. Oystercatchers at Shellness Point were also well below normal levels with only around 500+ birds, but Curlews held up with c. 450 birds. The most noticeable event on the day was the incredible heat on top of the seawall as I made my way along it, so hard to equate that with the snow and ice of the winter as I carried out Harrier Roost counts there.
The duck numbers still continue to plummet and once again the actions of the profitable but damaging farmland duck shooting around corn-fed flight ponds, where ducks are regularly shot in large numbers, raises the question of how much longer this can continue before birds such as Mallard become an uncommon species.
But enough of that, the reserve is now settling into its post-breeding and annually quiet period, little will happen now before the autumn, so a few more flowers and things from the reserve:- 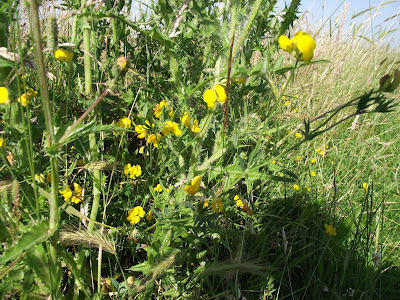 The forest of dead Milk Thistle plants, little left now but to drop seeds for a repeat performance next year. 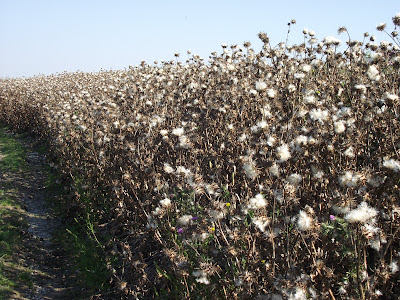 The lovely Great Willowherb, a favourite of the Skipper butterfly family. Followed by one of my favourite caterpillars, those of Cinnabar Moth feeding on Ragwort plants. 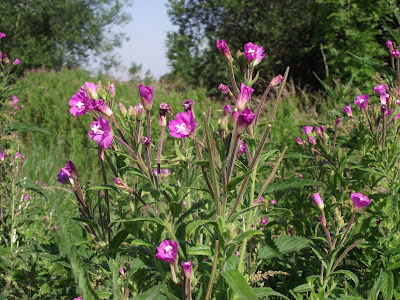 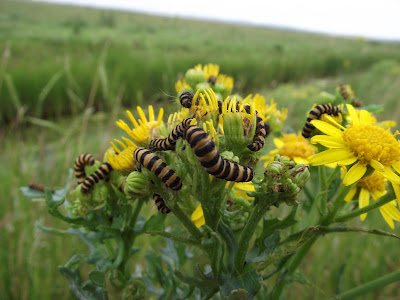 Posted by Derek Faulkner at 18:01 No comments:

A small selection of the continuing profusion of wildflowers on the reserve that I have passed by as I walked round. They've certainly benefited this year from the wet and warm conditions, as it appears are the grassland butterflies. Meadow Browns and Skippers are beginning to appear in large numbers now, with Small Heaths in moderate numbers but Gatekeepers yet to appear. Seems strange that these meadow butterflies, that have no real shelter from the repetetive rains this year, are doing OK and yet many woodland butterflies aren't.

Apparently there is a Quail calling daily from a hay meadow just before the farmyard at Kingshill Farm, Elmley. Talking to the manager of the NNR there the other night, he was telling me that on several occasions one day this week he had to speak to people who were in the hay meadow apparently attempting to flush the bird into view for reasons best known to them. Whatever the agenda of these people it appears that it didn't include staying out of a private conservation area or the non-disturbance of an uncommon bird, but then I have seen some twitching accounts where this practice is seen as acceptable by a minority that must see a bird no matter what. Which leads me to a recurrent speculation about wildlife photography, damage to habitat.
I read a blog posting a few weeks ago wherein a guy described his day out to see and photograph Large Blue butterflies. He knew he'd arrived at the site when further up the sloping meadow he could see several people already wandering around in the grass looking for the butterflies and so he joined them and one was eventually found. Now given that this apparently happens on a daily basis, I could only in my sad way, think that surely that means a lot of habitat is being trampled down, possibly even eggs, or caterpillars before they are taken underground, squashed. Am I wrong or have these people found a new way of walking round the same site daily without trampling down the vegetation.

Summertime So they Say 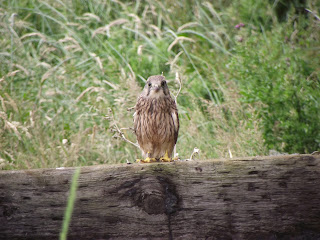 As predicted in my last post, the two Kestrel chicks have now fledged from the box on the barn and one of them is pictured in these two photos alongside the barn. They have both been rung, as the leg shows, and hopefully in time we'll learn of their ultimate destination. 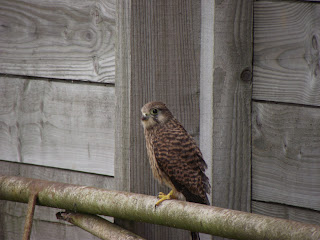 Also as I mentioned in my last post, the vegetation on the reserve is now reaching record levels, and always seems to be soaking wet, its real hard work walking round at the moment and with the scarcity of birds at the moment, there are times when you wonder why you are. Given the crapness of this summer its tempting to wonder what we will get this winter - will it be T shirts in December or Siberia in January - nobody seems able to predict more than a day ahead just lately. However, one thing that is at odds with the perceptions of the current weather at the moment, is actually how wet it is. The new rills on the reserve are holding very little water, as the photo below shows, and the ditches and fleets only have average summer water levels, so perverse as it sounds, clearly we have had a lot of rain but not heavy rain, and the odd dry and sunny day and all the vegetation are keeping water levels low, a dry autumn would quickly have us back to where we started. 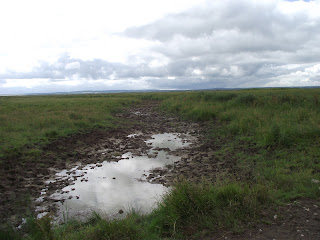 The one patch of ex-pond water lilly have been slow to spread across the ditch this year and I was worried that perhaps the snow and ice had killed them off, but now they are starting to spread and show themselves, as the two photos below show. 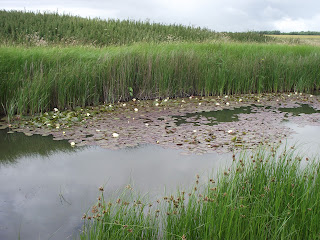 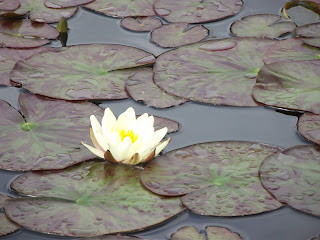 Other than the above, the only real birds of note lately, has been the start of the autumn passage birds. I had 8 Green Sandpiper yesterday and 4 Whimbrel on Friday and most days there seems to be some degree of movement through of Swifts.
Lastly, whilst continuing with my family history research, I was in the main Sheppey Cemetery over the weekend looking at graves and headstones, as you do, and came across a couple of clumps of this delightful wild flower, Orange Hawkbit. If you double click on it, it comes up a bit closer, it is a delightful flower that I think, closely sown, would grace the front of any flower border. 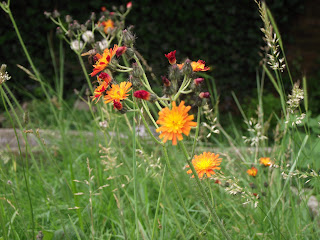 Posted by Derek Faulkner at 17:58 No comments: 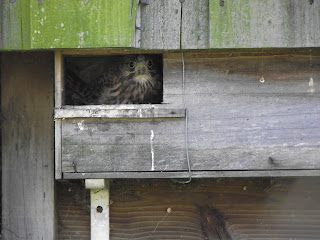 The two young Kestrel chicks on the reserve look like they're about to fledge very soon, here one looks out from the nest box.

It's been over two weeks since my last posting, a combination of running out of things to say as a result of the reserve running out of steam and a preoccupation with some tracking down of family history facts and evidence. On the reserve the breeding season has pretty much ended now, there are a few Redshank and other wader chicks about but we're pretty much waiting for the autumn passage to start now. A couple of Green Sandpipers have been about but there's not a lot else of note about, apart from the one Brent Goose that doesn't look 100% fit. Other than that, the reserve remains as overgrown as I've ever seen it and on damp days like today is bloody uncomfortable to walk through, resulting in wet trousers. A few Meadow Browns and Small Heaths have been appearing but no butterflies and Odonata have been about so far, in even reasonable numbers.
So on the back of that daily boredom it was nice a fortnight ago, to welcome onto Sheppey someone who was researching her family history, a family that included in one place down it's line, a member of my family, so we were very loosely related. She has spent the last couple of weeks on and off the Island and with my help, researching her quite tangled family history. It's been good fun and very interesting and having carried out some research on my family history a few years ago, that and my knowledge of local people and history, has enabled me to help her and as a result we have become special friends.
For me, researching family history is a riveting subject and the further down the line backwards that you go, the more absorbing it gets as you go down lots of blind alleys before all of sudden pieces of jigsaw start to fall into place. Coupled with that is the social history that surrounds the family at various stages of their evolution, that too can be just as interesting., In the case of my family, it was possible to follow individual family groups around the various farms on Sheppey as they moved to where work was available. Here, when you look at the ten-year census returns, it is often astounding to see how many people, and not all from the same family, who were recorded in just one simple, two up-two down farm cottages, with no water and no lighting as such. And probably as a result of that, how many, both adults and infants, had died in between the ten year censuses, they certainly lived in some pretty squalid conditions, often stuck out on cold and damp marshes miles from anywhere.

Researching family history is something that you go into with some trepidation at first but as you find your way round the information sites and the discoveries start to mount up and the paperwork starts to overload your desks, it becomes totally absorbing and extremely addictive after a while.
Posted by Derek Faulkner at 11:57 2 comments: