I've been asked recently, why no new blog postings, well to be honest I ran out of ideas and enthusiasm. But time has moved on, so perhaps a few up-dates will prove interesting.
The weather here on the North Kent coast this week has certainly been frustrating, we've been stuck with a strong and chilly NE wind  all week. It has come straight down the North Sea for several days and kept us under grey skies and low temperatures. Today was a classic example, the Western side of England had temperatures of 27 degrees and the best we could do was around 17 degrees. It has been a rubbish summer so far.
Sitting in a hide of The Swale National Nature Reserve this morning, with a large bed of the tall, phragmites reeds in front of me, I felt sorry for any nesting Reed Warblers in them. They build their small nests by weaving them round two or three of the upright reed stems. Watching the reeds being smashed to and fro in the blustery wind this morning, it was easy to imagine the nest either being pulled apart, or any eggs or chicks being thrown from the nest.
The breeding season on the reserve is running down now to it's finale and from what I've recorded on my daily patrols, it doesn't appear to have been all that spectacular. Lapwings have continued their run of several poor breeding seasons, for no reason that we can particularly identify, despite conditions being very good for them. Around a dozen or so pairs do not appear to have fledged all that many young, although the long grass this year could of prevented some being seen. The Little Terns on the Shellness shingle beach also appear to have failed miserably, despite high hopes from several pairs of this delightful small sea bird this year.
On the plus side, the Greylag Geese have raised their regular, annual 50-60 goslings, not that we need many more and Skylarks have also continued with a consistent annual number of around 24-26 pairs. Throughout the marshes of Sheppey as a whole as well, Barn Owls have had a good breeding season and many chicks have been ringed.

The down side so far, presumably because of the cool and wet spells that we've had, butterfly numbers are very low, almost none at times.

The grass on the reserve this year has had a very good growing season with some fields showing far more grass than we would like and a lot of that has been down to a shortage of cows to graze it. This Spring/Summer we have been limited to just two small herds of 20-30 cows, plus their calves and with a bull in each herd. One of the herds has this magnificent specimen in attendance and he has become quite a determined character. 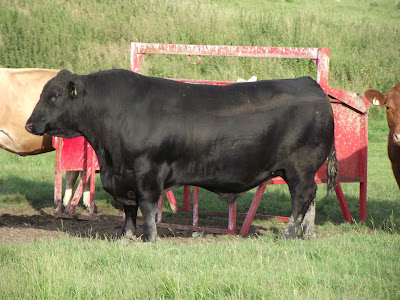 For a day or so this week, the two herds were separated my a wide fleet with a gate in the middle and one morning I noticed that the black bull was in with the wrong herd, who had their own brown bull. I assumed that it was planned by the grazier and walked on. An hour later I spotted a steaming black bull walking back across the marsh to his proper her but, the gate was still intact, clearly after doing what he'd wanted to do, he'd swam back across the fleet to rejoin his own herd. It was then thought best to separate the two herds better and so two large fields and two fleets were put between them to hopefully stifle the instincts of the bull. It didn't work, this morning when I got there, the black bull was back in the wrong herd again and had crossed two fields and two fleets to get there - nothing like the lure of a ripe female to a healthy male, is there!

Away from all that testerone and on the neighbouring farm land, a change of crop seems to be taking place. Last year a few fields of spring barley were sown and must of produced results as this year a lot more has been sown, vying with wheat to be the dominant crop. If it continues it could be beneficial for wildlife because the field lay fallow during the winter months, giving much more foraging areas for seed eating birds.
Posted by Derek Faulkner at 22:06 11 comments: