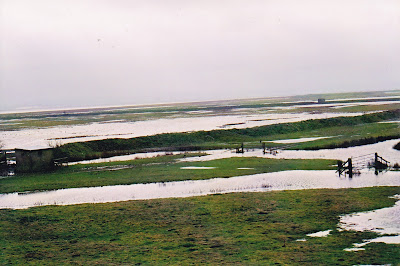 As readers will have read in my last couple of postings, it has been getting progressively wetter by the week here on Sheppey this week is the third consecutive week with rain almost daily and often heavy. As a result the reserve that I spend most of my year wandering about on and carrying out my Voluntary Warden duties, has now reached the point where it is not really enjoyable to try and get round it. The photo above was taken a few years ago and currently we're beginning to approach those kind of water levels again. As you can imagine, wading through large areas of such water and soft, clinging mud that almost sucks one's wellies off, is none to enjoyable. Twenty years ago, when these scenes were almost annual, I was in my fifties and it wasn't too much of a problem, almost a challenge, but not now. Plus, when you're a little, short-legged Jack Russell, like the one that always accompanies me, it becomes quite aquatic and grim. So at the moment my daily visits are limited to walking the farmland perimeter as best as I can.
The other problem that the reserve faces in such times of flooding is the fact that the reserve not only receives all the water that drains off the higher arable farmland alongside but that the whole reserve itself  has to drain across it's whole length to just one 12in. pipe at one end, so it's a slow process. One winner in this situation though is the attraction that it is presenting to the wildfowl in the area, especially now that the wildfowlers that would normally be alongside the reserve trying to harvest some of these ducks and geese, have been stopped by the Kent Wildfowlers Association in order to comply with Covid regulations.
Moving to an entirely different subject, I was reading an account the other day of a person's experience with ticks on dogs and it got me thinking of my experiences. In the years running up until the 2001 Foot and Mouth outbreak, ticks used to be real problem on my dogs, mainly because the marshes that I frequented here on Sheppey, were always holding large numbers of grazing sheep, something that Sheppey (Sheepey) has been noted for over many centuries. Sheep ticks were the constant reason why many forms of wildlife on the Sheppey marshes were often covered in the awful blood-sucking pests, my dogs included, although curiously, rabbits never seemed to carry them. Many were the time that my dogs would catch a stoat or ferret gone wild and I'd find that the animal's head was covered in many large ticks, all sucking the life out of them. Adult ticks would drop off the sheep and literally sit on the grass or any other vegetation and then simply wait for a warm blooded animal to brush past and then crawl on, lay it's eggs and look for a top up from the animal's blood. Fortunately, apart from one Beagle, all the dogs that I've had over the last fifty years, have been smooth haired, mostly white, Jack Russells and so it was relatively easy to find the ticks in their coats. It was necessary though, to regularly sit down and search through the dog's fur and seek out any ticks that might be using the dog as a meal. Mostly it was the odd one or two but there were occasions when it was possible to find many dozens of newly hatched ticks, all no bigger than a pin head and all in need of picking off before they grew any bigger, luckily, I got a perverse pleasure from squashing each one.
However, after the mass culling of livestock during the F&M outbreak, the livestock farmers on Sheppey re-stocked with mostly cattle and so the tick problem has mostly gone away.
Posted by Derek Faulkner at 11:31 20 comments:

Where Have all the Birdies Gone

After last week's 48 hour deluge of rain, we had several days of dryer weather, including a couple of severe frosts. Last night saw it rain throughout, although not heavily, and tomorrow and Thursday are forecast to see it rain for much of both days again, so back to square one with some possible flooding.

On the Swale NNR here in Sheppey, where I'm now entering my 34th year as a Voluntary Warden, the water levels look as good as they've been for several years. The ditches, fleets and shallow rills are full, and the grazing marsh is either waterlogged or covered in largish areas of surface water. It looks how it used to look most winters up until several years ago - a good example of a typical winter on the North Kent marshes. Sadly, that seems to be where the comparisons currently end, despite the perfect conditions, recent walks across the reserve have been noticeable for the lack of birds.

In those "normal" years that I reflect back on, such conditions would of seen bird numbers, at times difficult to count, there were so many. Golden Plover would of been spread out as far as the eye could see across the waterlogged fields, several thousands at times and they would be joined by similar numbers of Lapwings and other wading birds.The large areas of surface water would of been inhabited by all manner of ducks - several hundred Wigeon, Mallard, Shoveler and Pintail. The sounds when a passing Peregrine Falcon or Harrier went by, scaring the huge flocks up, was both deafening and visually spectacular.

Today, as it has been for some time, it was the sheer absence of birds that was so marked. There doesn't seem any reason for walking across deserted, waterlogged fields that once would of been swarming with birds, as I've described. In all honesty, apart from a few hundred Brent and Greylag Geese that feed daily on a neighbouring field of winter corn, alongside one end of the reserve and a couple of dozen Mallard, where are the birds. Where have all Golden Plover gone, everything's right for them. Even the wintering White-fronted Geese, that had been with us since well before Christmas and totaled 230 at the beginning of the month, haven't been seen or heard for the last week or so.

It's a worrying trend and it doesn't seem to end there, gardens around here seem to be suffering the same dearth of birds, unless you count House Sparrows, I had 72 on or around my bird table a couple of days ago and that's fairly normal. But no, I live in a very rural part of Sheppey, both mine and the gardens all round me are full of shrubs, trees and flowers and yet finches coming to bird feeders are a rarity and even Blue and Great Tits are mostly absent -  the count for my RSPB Garden Birdwatch will be sadly depleted this year!

she's got everything she needs

she's an artist, she don't look back,

she's got everything she needs

she's an artist she don't look back,

she can take the dark out of the nighttime

apart from that, well, here we are just a few days in to 2021 and already it feels like 2020 Part Two. Today sees us here in North Kent enduring our second day of non-stop rain and cold Northerly winds. Weather forecasts promise yet another 24 hours of this weather, in the meantime fields are starting to flood and gardens round here are leaking from every orifice.  Dark skies, the sun a forgotten spectacle, the buzzing of summer meadows, bees, butterflies and swallows like a distant planet and yet, in a long few months, I'll be talking of hard dry ground, praying for those precious few drops of rain to wet the dust. I guess, like birthdays, these things go round and round, they get better, they get worse.

In the mean-time the rain and the wind continue to batter the conservatory windows, I fall asleep, I wake up, I fall asleep, and the 70 odd sparrows around my bird table jostle for every last seed of budgie mix.

15.30 and the light is fading fast, cars have their lights on, winter at it's extreme, two months to go until Spring peeks over the hill.