Well the general wetness of a week or so ago has soon disappeared after a week of sunshine and strong drying winds and the ground has hardened up again. It's not all bad news and dryness though, the ditches remain freshened up and the grazing marsh looks much greener than it did, and with rain forecast for the whole day tomorrow (Friday), things should soon dampen down again.
What's more, we have the Pink-feet Geese back again, there were 44 this morning, alongside but staying seperate from 160 Greylag Geese. The Pinkfeet were on the reserve quite a bit during September but then spent a week or so along Capel Fleet before returning. How long that they and the Greylags will survive in those numbers is unknown but every day they make flights from the reserve and across the neighbouring farmland, crossing low over ditches regularly shot by duck shooters who lease the opportunity from the farmers.
Below you can see some of the dark-headed Pinkfeet, with, in the middle photograph, Greylags in the background. 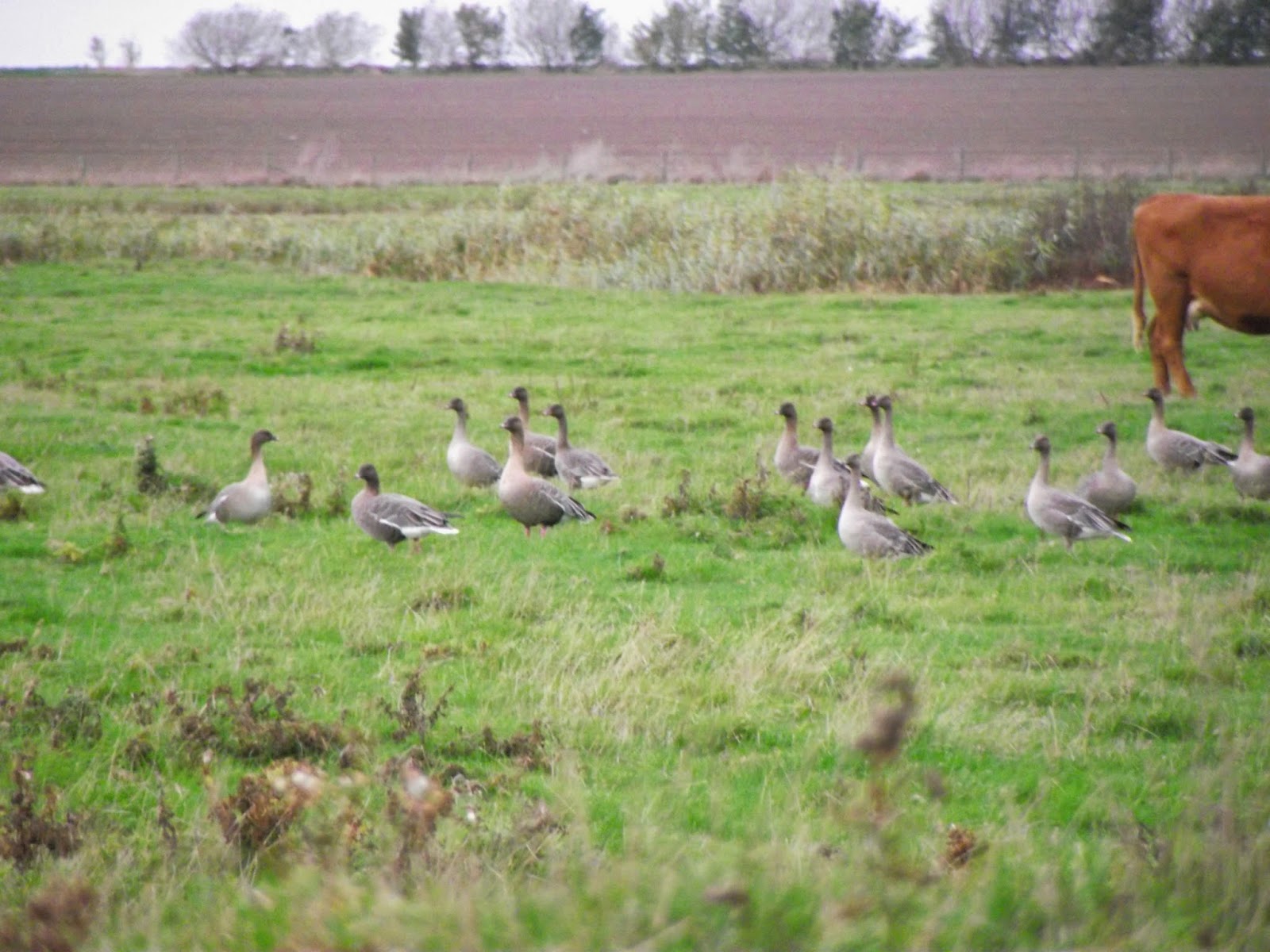 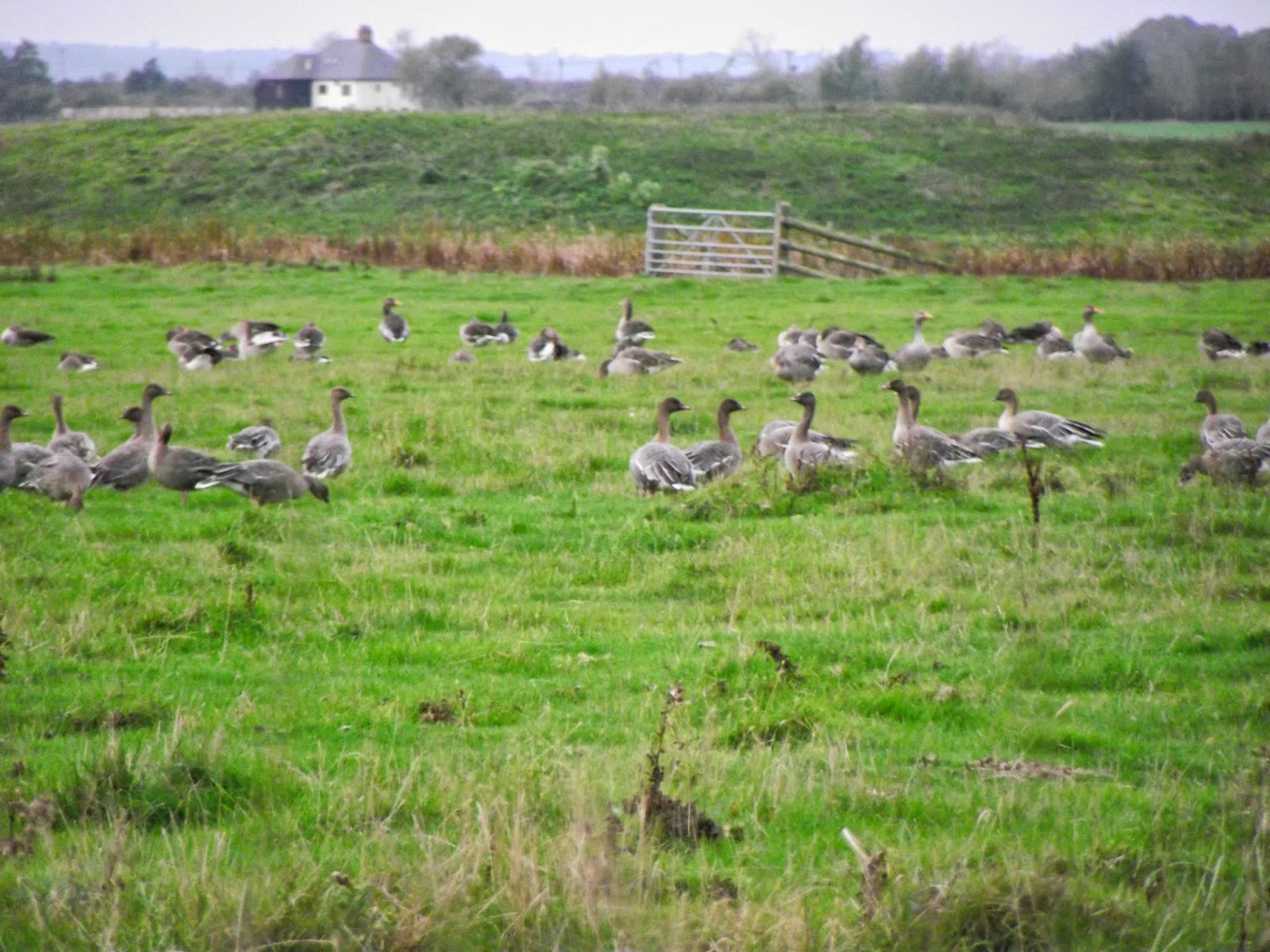 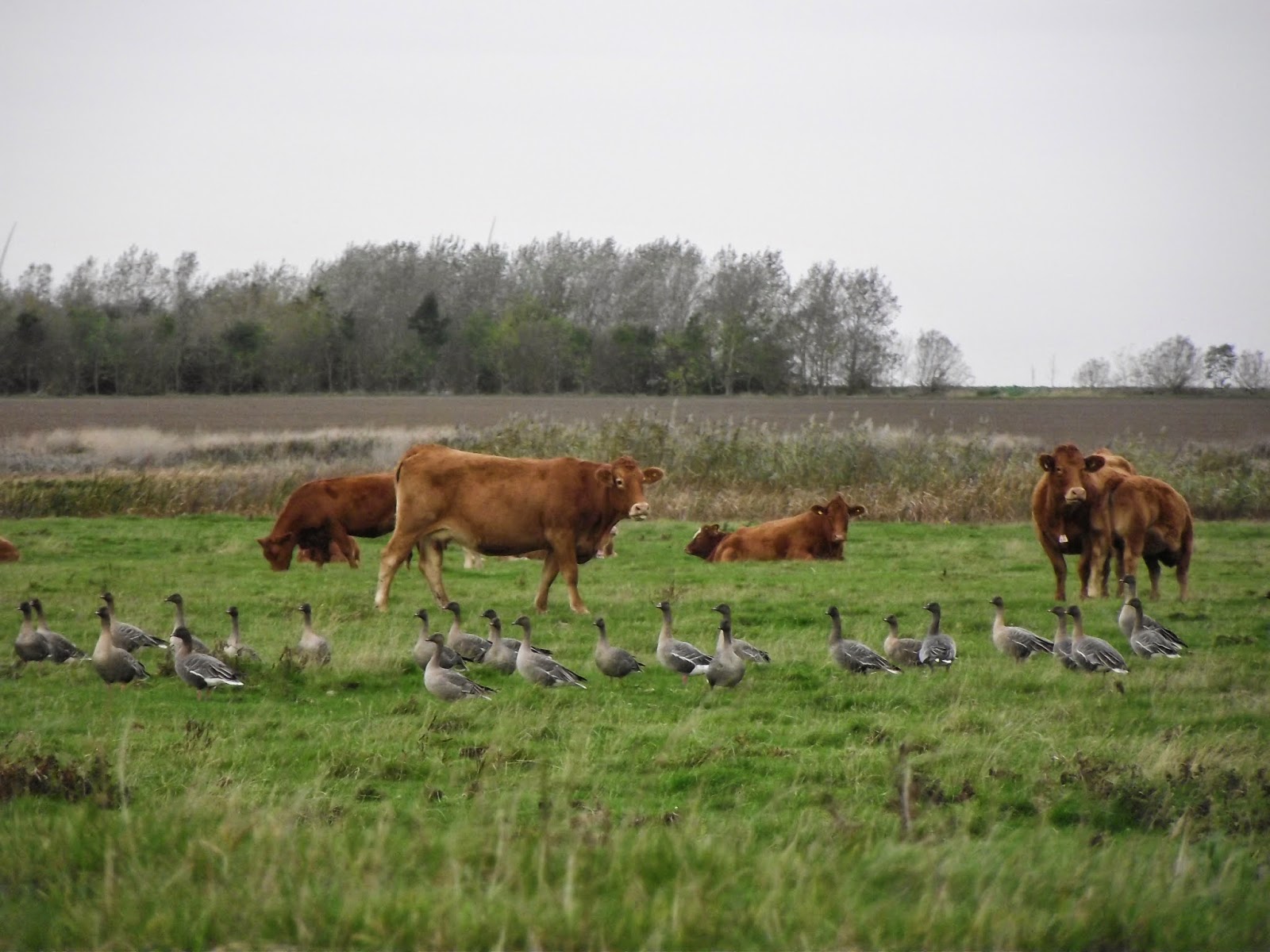 Other than the geese, the bird numbers still remain a case of bits and pieces. Most days I see a couple of Stonechats and several Bearded Tits. One or two Water Rails can sometimes be heard "mewing" in the larger reed beds and yesterday I even had a Cettis Warbler in the reed bed alongside the sea wall. One species that does cross the reserve every day in good numbers but without stopping, is the Black-tailed Godwit. This morning over a hundred went by heading to Oare from their daily feeding grounds on the mudflats at Leysdown.
Now that the two RSPB fields alongside the reserve have been cattle grazed down very short I had a walk across them this morning in the hope of finding a Lapland Bunting but a few Skylarks amd Meadow Pipits were the best I could record, the glorious winter of a couple of three ago when we had a flock of up to 60 Laplands, is unlikely to be repeated.
This afternoon for a change, I went to Warden Point, where other birdwatchers having been having some success recently, but even there it was deathly quiet, a small flock of Long-tailed Tits was the best I could do.
Whilst mild winters are more comfortable to walk about in it would be nice to get a brief cold snap this year - several hard frosts and a short snowy spell would go down well and liven up the bird scene.
Posted by Derek Faulkner at 16:34 4 comments:

At last, the recent rain has begun to make a slight difference to the reserve. Some of the shallow rills that we dug across the grazing marsh are now showing an inch or two of water in their base, the ditches are losing their stagnant look as fresh water begins to re-oxygenate them, and the grass is beginning to re-grow. There;s still a long way to go in respect of water levels but at least things are looking fresher and I'll refrain from saying we need a lot more rain, after saying that last October and incurring the wettest winter for a hundred years!
The last couple of weekends have also seen some beautiful dawn skies, around 6.30 time. The first was taken as I drove along the Harty Road and the second 20 mins. later as I began to walk across the reserve towards the Sea Wall hide. It's always the best time of day to be out, any time of the year. 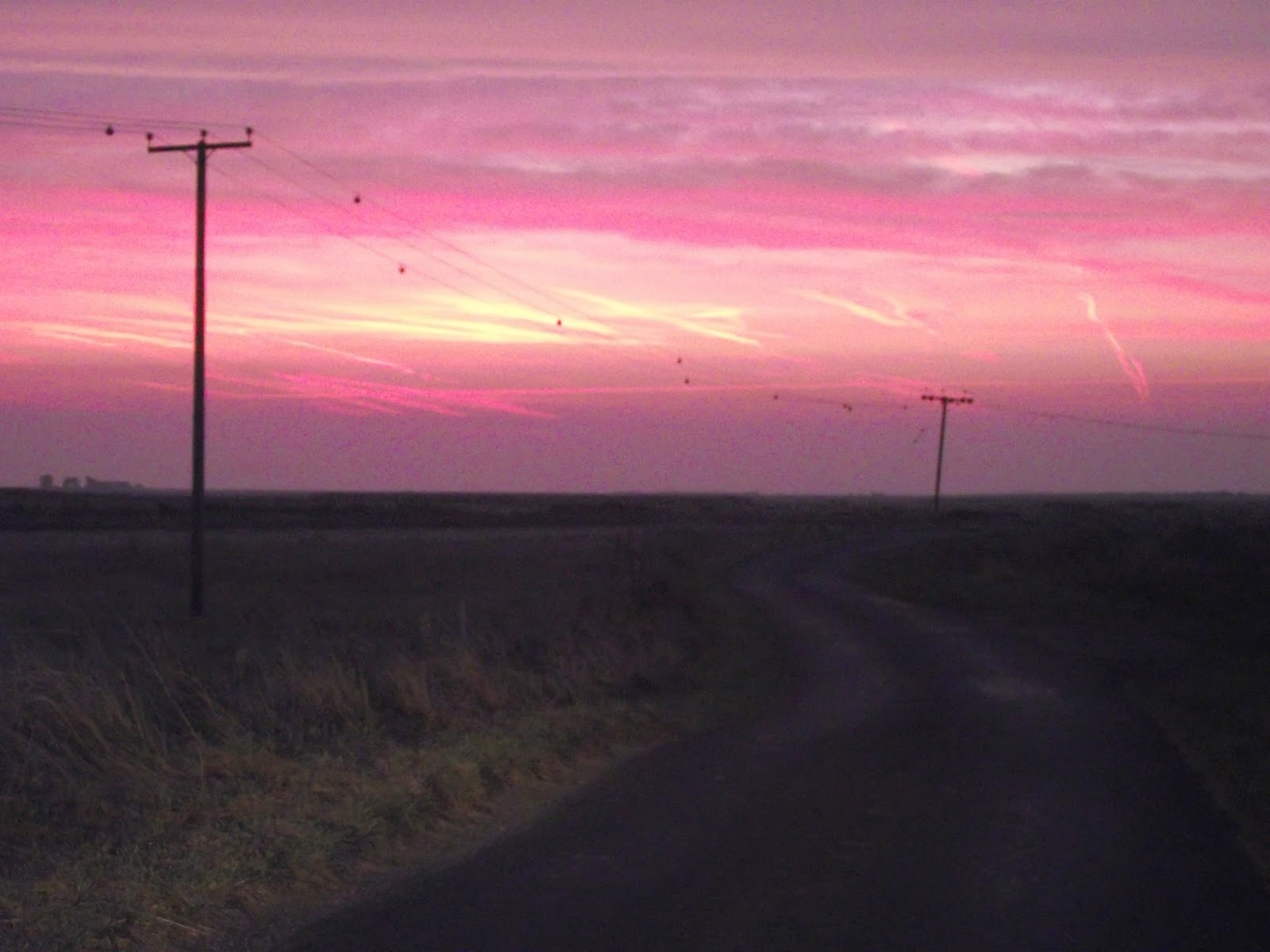 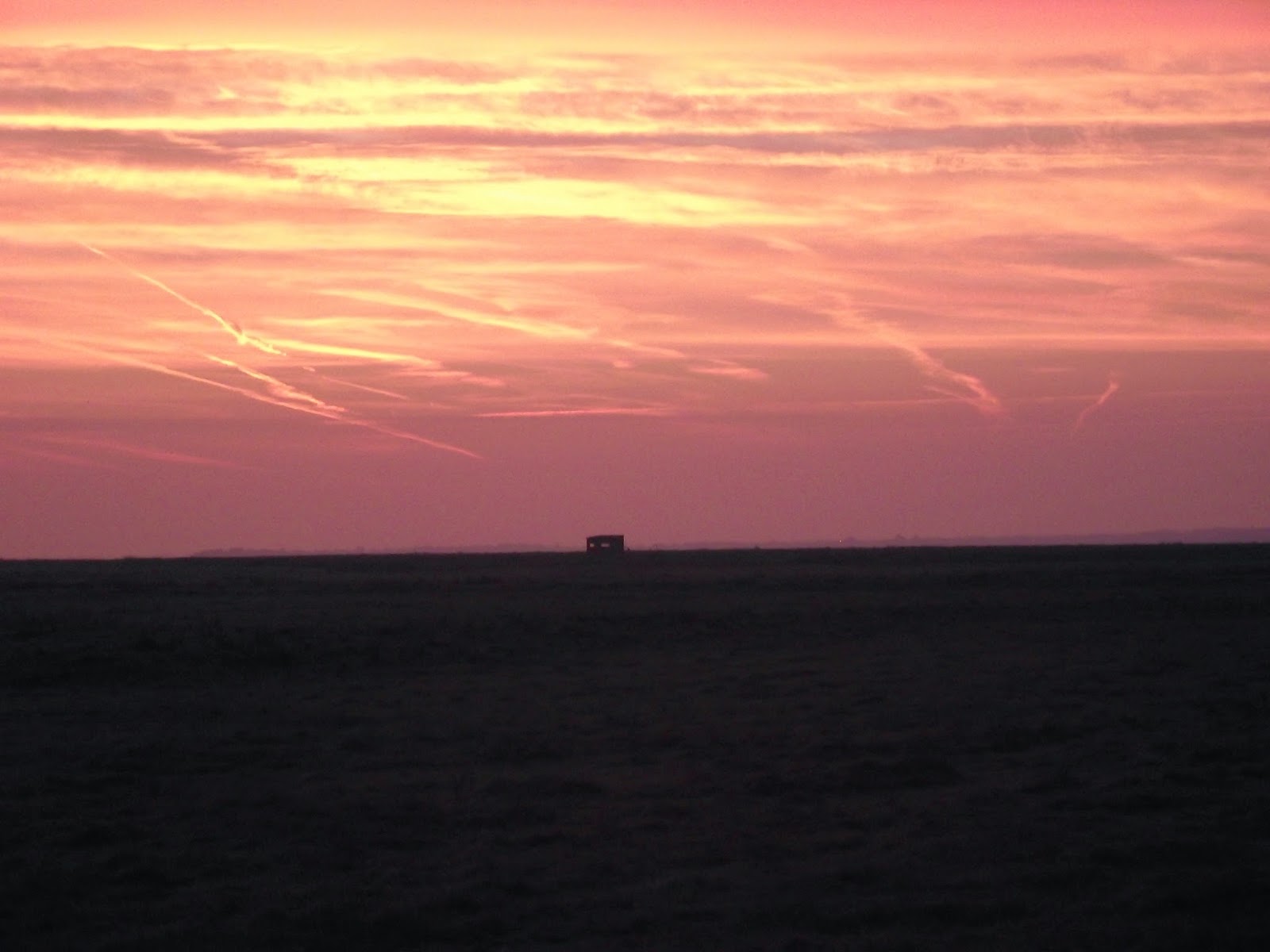 Bird-wise however, the reserve has remained frustratingly quiet and if it wasn't for the daily to and fro flights of the resident Greylag Geese (seen below), it would be very boring. 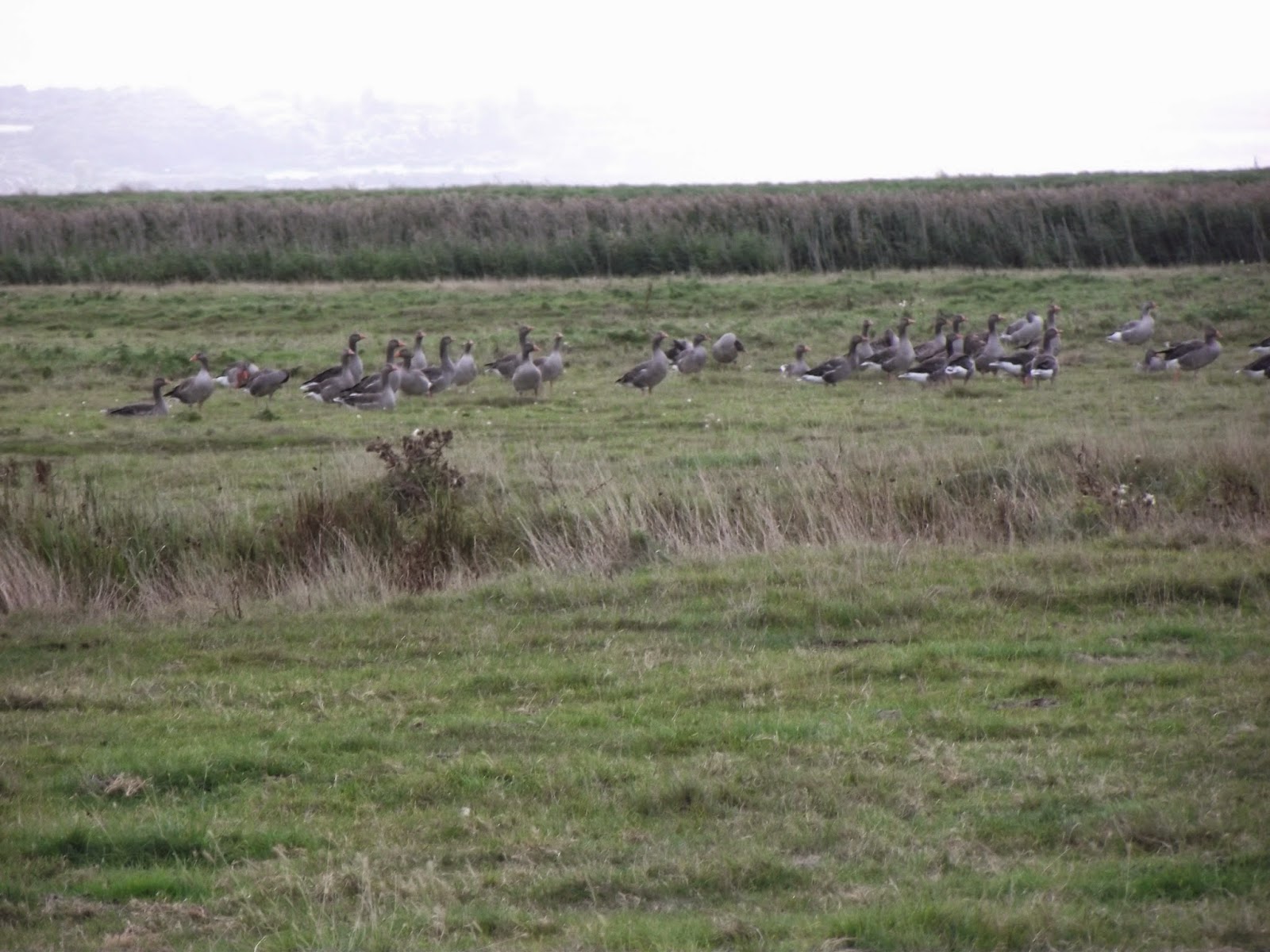 Their numbers flucuate between 100 and 300 at times and they tend to roost overnight in the "Flood Field" in front of the Sea Wall hide, fly from there at first light to the marshes below Leysdown, presumably to feed, and return a couple of hours later. For around a month they have had three White-fronted Geese with them, which like the Greylags are very approachable, making their origins a bit dubious and also for a couple of weeks, 40 Pink-footed Geese. They disappeared a week or so ago but were re-located on Sunday along Capel Fleet, presumably the wide, open stretch between "Capel Corner" and Windmill Creek, a favourite area for a lot of wildfowl due to copious amounts of corn being spread along there on a regular basis. This of course makes the Pinkfeets increasingly vunerable to being shot as that stretch of water is heavily shot by the neighbouring farmers, hence the corn as bait.

Throughout some of Kent, our annual winter Harrier Roost counts begun last weekend. These counts that are carried out once a month on a Sunday evening, through the six winter months, have given valuable information on favoured roost sites over the years. Most importantly they have highlighted the sad decline of wintering Hen Harriers in this area. On Sheppey, their traditional roost site has always been the saltings close to Shellness Hamlet and last winter, for the first time, I never recorded a single bird on any of the six counts. This autumn we are still waiting to sight a Hen Harrier anywhere so far and the beautiful painting of a male Hen Harrier at the Shellness blockhouse could soon be seen as the headstone marking the death of such a beautiful bird.

On the subject of shooting and harriers (not at harriers I hasten to say), the attempt at counting roosting harriers along the wide reed beds of Capel Fleet between the Raptor Viewing Mound and Muswell Manor, was thwarted on Sunday night by heavy rain and duck shooting alongside the reed beds. I mentioned this disturbance problem last year and it is clearly now a regular Sunday night occurrence in the winter which means that counts along that stretch will now have to be done on Monday nights. Quite ridiculous when you consider that the whole length of Capel Fleet has SSSI, SPA and Ramsar status and should be free of such disturbance but I'm reliably informed that as shooting was already taking place before the designations, it couldn't be included in the list of factors listed as damaging to that particular site. Should that be the case it makes the designations a tad pointless, especially when you consider the shooting improvements that regularly take place along there and the fact that the Hunt always push their pack of hounds through the whole length of the reed beds in order to flush out foxes.
Mind you, Natural England, who administer these designations, have been so stripped to the bone, staff and authority-wise, that I imagine that they're now having to share the pens that they push, let alone go out into the field and witness such protection shortcomings.
Posted by Derek Faulkner at 09:30 4 comments: