A Kind of Goodbye

"This day winding down now
At God speeded summer's end
In the torrent salmon sun,
In my seashaken house
On a breakneck of rocks
Tangled with chirrup and fruit,
Froth, flute, fin and quill
At a wood's dancing hoof,
By scummed, starfish sands
With their fishwife cross
Gulls, pipers, cockles and sails"................Prologue - Dylan Thomas

The above, the last stand-alone poem written by Thomas, a year before he died, could when you read  throughout it's whole length, be seen as a kind of goodbye to all that, sort of poem. It pretty much sums up the way I feel these days.

Here on Sheppey, our little island off the North Kent coast, there are not many of us aged, in our 70's, "men of the countryside" left. By that I mean people who have spent their whole life wandering the fields, hedgerows and marshes of this island, and as a result have memories of its wildlife, it's seasons and it's people that go back a lifetime. When I was a youngster there were always those old boys that wandered the countryside, that drank from a bottle of cold tea, that always knew where wildlife had hidden up, that could kill, skin and gut a rabbit in minutes, or look at the sky and always seem to know when it was going to rain.
I can only think of a few of us now of that ilk, that are left round here. I'm not trying to portray myself as some kind of modern day Jack Hargreaves, far from it, but it's rare these days to come across someone else that you know who has been wandering the area for so many years. A lifelong friend of mine, who I first worked with on the Kent River Authority on Sheppey's marshes here in the 1960's is another such person. He's a couple of years older me and has a store of knowledge and skills that you just can't buy, that come with a lifetime's experience. We still coax our arthritic limbs round the fields each day, still always have a dog at our side and now despair at some of the changes that continue to occur. Who for instance would of expected to see so many empty rabbit warrens. We could never have imagined that in our lifetime, rabbits, that once were counted in thousands, would now only be counted in dozens.

For me, it begun as a young boy in the 1950's, keeping tadpoles in an old sink in the garden and watching them turn into frogs. Keeping the very common Small Tortoiseshell caterpillars in a sweet jar with muslin on the top, feeding them on stinging nettles and watching them pupate. Now Small Tortoiseshell butterflies are very hard to find, almost rare. As a young child I wandered the marshes near me, all alone - laid besides ditches, clambered through bushes and learnt what I could about wildlife. When I joined the Kent River Authority as a teenager I found myself among several people who fished, hunted, shot and trapped, and I learnt a lot about countryside ways. When I left to work in the local docks for the next 34 years, I still carried on practising those skills. A friend and I spent the cold, wet and wintry months for many years catching rabbits which we would skin and gut and sell for pocket money. During the summer months we netted the ditches and caught eels, often lots of eels, and sold them to a shop in the East End of London and then later, I even tried duck shooting for one winter. Then I became involved with the local nature reserves and my bird watching became more serious and so did my convictions.
I still roamed the marshes with my dogs(s) in the usual unrestricted ways but I had a purpose, I recorded everything I saw and passed it on. In 1987 I became a Voluntary Warden of a local, Natural England reserve on the marshes and still am 32 years later. As a result and for many years, I was very anti shooting and hunting, fell in with the mind set that if you are a bird watcher or to do with conservation, then you automatically have to be opposed to such things. However, a number of years ago a wildfowler began to make me realise that many of the things that I was opposed to had their rightful place in the countryside and in many ways helped preserve what is left of it. I began to realise that there was and should be, room for all of the various pursuits in the countryside, after all, it was how I had begun, not with the blinkered and idiotic Chris Packham views about hunting and shooting.
So, I'm ending my time in the countryside as simply a "man of the countryside", enjoying being part of it and all that goes on it, and as my friend often says, we should be glad that we're the age that we are - we've had the best of it and won't have many more years to see it get any worse.
And that is about it.
Posted by Derek Faulkner at 16:21 17 comments:

Harty and the Reserve

The view below shows what you first see as you drive down Capel Hill along the Harty Road at the moment, here on Sheppey. A combination of stubble fields and grazing marshes, all golden yellow and bone dry. 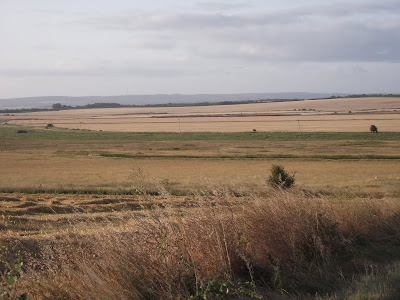 In the stubble fields, the resident Greylag Geese, numbering several hundred in total, are now a daily feature as they glean all the spilled grain. 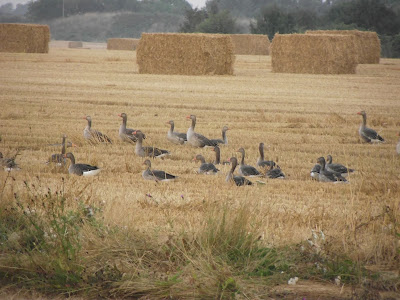 On the nature reserve itself, we have two herds of cattle and their calves, one larger one and this small one. Once again the dryness of the grass is quite evident. 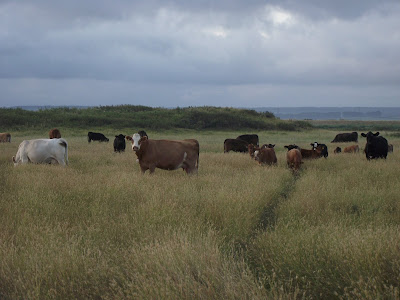 These well grown calves were curious to see what I was up to. They'll probably be taken away some time in October as their parents are already pregnant with next year's batch. 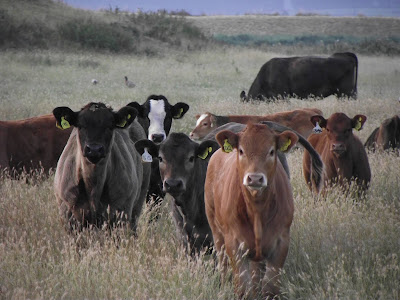 Just two months ago, "The Scrape" as we know this site in the middle of the reserve, was full of water and home to several pairs of Avocets and their chicks. It only re-fills from rainfall and some water pumped from a nearby ditch, which itself is very low, and so it's unlikely that it will be full again before the New Year. 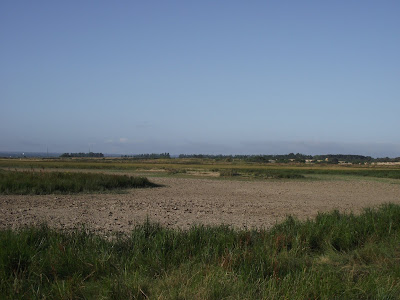 On the reserve we have three types of clover, the common red and white types and this one known as Strawberry Clover - easy to see why. 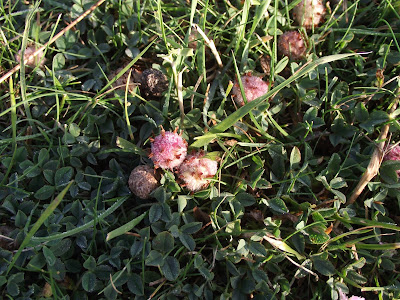 I came across this male Common Blue butterfly this morning, sheltering from the wind. Apparently, nation-wide, they have seen a large rise in numbers both last year and this, which has to be a good thing. 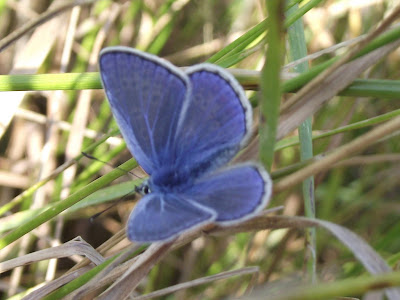 At the moment (Weds), the weather forecast nationally is for extreme weather for most parts of the country, Friday into Saturday. Strong winds and heavy rain are forecast but I think that the operative words are "most parts". We'll of course get the strong winds, a combination of those and hot sun have been drying every last drop of moisture from us all week. But heavy rain - I'd love to be proven wrong, but rain has a nasty habit of always passing just wide of this island a lot of the year - time will tell.
Posted by Derek Faulkner at 13:10 8 comments:

I feel a bit awkward posting a photograph like the one below, bearing in mind the damage that the heavy rains have caused to both farmers and households in Northern England but this blog is about the local scene. 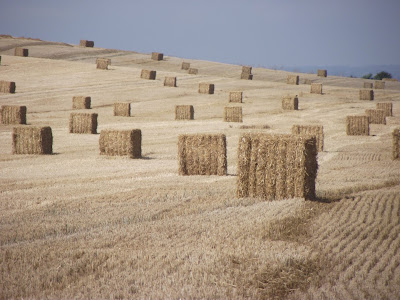 Here on Sheppey all the farmland is very dry and the harvest has been very successful due to pretty much perfect weather conditions. Once all the bales of wheat, barley and rape straw have been collected and stored, then various tidying up and light cultivating of the fields will take place. Rape is normally sown first, in between the lines of wheat stubble, followed by the wheat or barley further in to the autumn, but neither is likely to germinate given the dryness of the soil.
The next couple of weeks will see the arrival of the partridge and pheasant poults ahead of the game shooting season, which for partridges, starts next month. It all seems a bit early given the warm and sunny weather that we are experiencing, most forms of shooting one tends to associate with cold winter days and besides the poults will need time to grow into adult birds.
On the reserve, the last couple of days have seen the continuation of the early autumn migration with the first Wheatears passing through on their way south. So it may be only late summer but an autumnal feel is beginning to gather in the wings.