Today, was the opening day of the new wildfowling season - wildfowlers are people that sit in tidal estuaries attempting to shoot any ducks and geese that pass them by. How you view that long established form of shooting is up to you, for me, it is the toughest form of the various types of wildlife shooting that there is and probably the least damaging in respect of numbers shot.
I arrived at the reserve barn at 05.30 this morning, it was pretty much still fully dark but what a wonderful, pre-dawn atmosphere/sense of anticipation that there was. I let little Ellie out of the car and we went through the five-bar gate, stepping on to the reserve's grazing meadows, it's marshes. To my left the sky was just beginning to brighten and the distant Sea Wall Hide just about visible. As usual at that time of day you tend to hear birds rather than actually see them. The Greylag Geese in the fleet on the reserve, thinking about moving on; and out on the tidal mudflats the bubbling calls of Curlews, the piping calls of Dunlin and Grey Plover, were a wader orchestra tuning up. 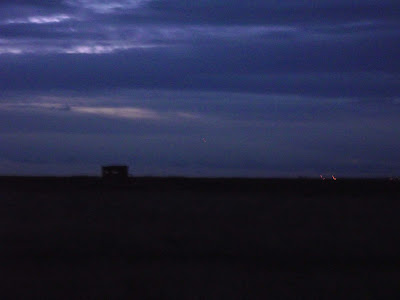 As I made my way across the  grazing marsh, picking my way through the idle cattle, chewing the cud so to speak, I felt a fast increasing tingle of anticipation running through me. Not at the prospect of seeing the various birds that might be about, but because this morning was yet another first morning of the wildfowler's shooting seasons that I'd attended. Would there be any sitting out there on the  tidal saltings, the other side of the sea wall. Being there at first light on the first morning of the wildfowling season is not something I'm expected to do as a Voluntary Warden, it was something I started 30 odd years ago, firstly to see if they were where they should be and then it became a habit and it's now a silly personal tradition.
Standing on top of the sea wall, the dawn had begun to brighten and I was able to pick out things and people, there were eight wildfowlers strung out across the saltings, all crouched down in wet and muddy rill-ways. 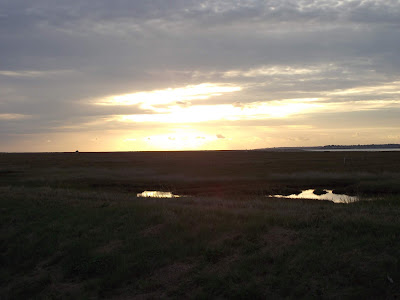 As the sun rose and then burnt through the clouds the sky quickly became a clear blue and the sun gained in strength. I mused over the thought that this was not real wildfowling weather, not bitter cold, windswept winter mornings, straining eyes and ears for that elusive duck with feet frozen cold as they stood in the mud of the rills. This was going to be another sun-bathing day, one to be shared with swallows and martins as they passed by, hurrying south - do we really get proper winter days nowadays!
The wildfowlers sat in sun-swept anticipation, swatting mosquitoes away from their faces, until suddenly around thirty odd Greylag Geese rose up from the security of a reserve fleet, could this be their time! The geese rose in a cacophony of sound, flew towards the sea wall and danger but then turned and flew out across the reserve to the farmland behind. But all was not lost, there a farm tractor disturbed them and they returned and once more the wildfowlers tensed and squatted down further. But the geese must of known something, they were heading out to the tidal mudflats to pick up grit for their gizzards but instead of crossing over the wildfowlers they took a route across the only section of saltings that the wildfowlers couldn't access, they were safe.
With the sun rising higher and the morning and the birds settling down into an anti-climax, a few of the wildfowlers began to pack up and head for home, I chatted to a couple of them, the season had begun but it was more summer than autumn. 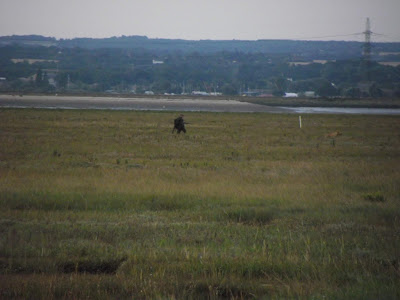 I did the same, getting out of bed at 04.30 was beginning to seem a long way away. Crossing back across the yellow and dry grazing marsh, Ellie doing fox-like leaps into every clump of grass in anticipation of a vole or mouse, I pondered over the likelihood of us getting our fifth dry winter. It certainly looks that way, the reserve is parched again. Then suddenly, I was surrounded in a huge, swirling flock of Sand Martins and Swallows, skimming across the grass tops as they headed south, they know that autumn's close, it's sad to see them go, I bid them safe journey.
Finally, I reached the barn again and here you see the five-bar gate alongside it, with the view out into the reserve and it's distant grazing cattle. The dark line behind them is the sea wall. 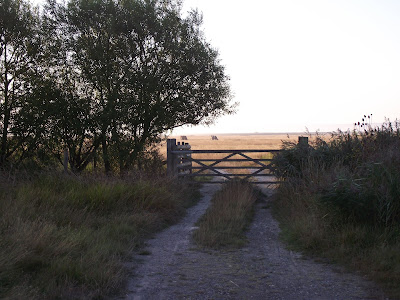