It has been difficult to find either the enthusiasm or topics to write another blog since the jubilation expressed in the last one. Since then we have pretty much had wall to wall winter again, with relentless heavy grey skies and non-stop very cold NNE winds.
March is normally a month where we begin to shrug off all the ill effects of winter, when a few warm and sunny days get both us, and wildlife in general, bursting with the need to get out and about and start things happening. A month when we start to look for those first returning summer migrants, but this last week or so has not seen me feel anything like that.

For a long time now I've not been a winter person, they take quite a toll on me both mentally and physically and as I descend headlong now into old age and arthritis, they get harder and more painful to endure. This morning for example, was pretty much the same as it has been for the last week or so, heavy grey skies, a touch of light drizzle and an icy NE wind. After just half an hour or so and after watching a traditional mid-winter sight of 200 White-fronted Geese flying into the reserve against a leaden sky, I gave up and went home, everywhere and everything, seems so cold and bleak. Sheppey's grazing marshes and fields at the moment look as though someone as weed-killed everything, they have a yellow and dead look about them, which seems so much at odds with how lush and green they were in that incredibly mild December/early January. Clearly it's going to be some time yet before the growth of grass will make it possible for the grazier to bring his cattle and new calves out from the winter stock yards, something that only prolonged warm weather will make possible.
Clearly I'm struggling at the moment to find any kind of enthusiasm for being out and about in this grey, cold weather and I guess that I have to be thankful for the fact that if it wasn't for the two dogs and the enjoyment that they get from their daily visits, then I probably wouldn't be going as much.

Having said all that, the BBC this week did briefly redeem themselves in my eyes and raise my spirits, with the excellent television programme "Land of Hope and Glory: British Country Life". They spent a year following the staff of the "Country Life" magazine and this week's programme was true to it's title and really did show proper aspects of British country life, a life that doesn't exist in the minds of the producers that make the awful and fluffy crap that they churn out each week in "Countryfile". This week they featured a proper gamekeeper walking around his grouse moor estate and pointing out the types of traps that he employs and why they and the control of predators are necessary. There was also another feature showing a guy and his terriers getting stuck into and killing large numbers of rats at a chicken farm, great sport and fun and something that happens regularly in the real and non-"Countryfile" version of the countryside.

Perhaps, once we get next weekend's Easter out of the way, the weather will start to improve and I can start to feel some warm sun penetrating my aching bones, we'll see.
Posted by Derek Faulkner at 11:33 4 comments:

Yesterday, we had the totally unexpected satisfaction of experiencing a superb Spring day, the first weather-wise. It was wall to wall sunshine throughout and with no wind, by early afternoon it was quite warm in the garden.
And what a difference that rise in temperature and sunshine made to the birds at least. Two pairs of House Sparrows were taking nesting material into my terrace nest box, see below, leaving just one compartment free and another pair were taking nest material into the hawthorn hedge where they nested last year. Despite the fact that my 50 strong flock of sparrows daily empty all the bird feeders, I felt sorry for those left out and hastily yesterday made another nest box and put it up on the bungalow wall. 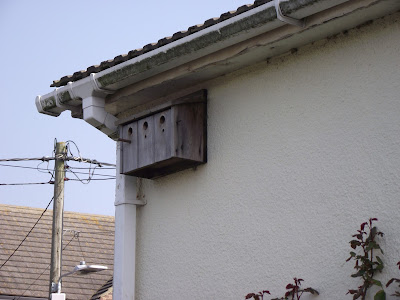 The only thing that spoilt the day out on the reserve was the heavy rain that we experienced early Wednesday, it has waterlogged the grazing marsh again and seen ditch levels rise back to where they were a month ago. However, with the next week due to be rain free, hopefully we will see a gradual drying out of the marsh again, in order to get to conditions that will suit the ground nesting birds such as Lapwings and Redshanks. Lapwings in particular, lay their eggs directly into a circular scrape that they make in the ground and their eggs quickly chill and become useless if we get future heavy rain spells that re-water-log the ground.
Today started with a hard frost and then thick fog and for most of my walk round the reserve I was confined to sounds rather than sightings but as the fog rolled in and out, the sun eventually won the day and by 9.30 we had blue skies and warming sunshine again. And that was the signal for all manner of birds to suddenly rejoice at Spring and begin calling, courting, or simply just singing. Very high up in the sky, Marsh Harriers circled round, repeatedly uttering the plaintive call notes that they do when calling for a mate. Skylarks, that didn't seem to be that plentiful a few days ago, were all of a sudden everywhere, serenading the whole marsh from on high with their beautiful song but best of all were the Lapwings. Late as they have been with their courtship displays, today it was all go as they rolled and tumbled in the sky, "peewit" calls echoing across the marsh, scrapes and eggs won't be too far away.
This afternoon as I write this at 13.00, we are now as it was yesterday, wall to wall sunshine, windows and doors in the house are open and Spring is bursting in, lets hope that it's not a false dawn so to speak.
Posted by Derek Faulkner at 12:51 5 comments:

Gawd, the weather is certainly in a yo-yo mood at the moment, take yesterday. At 8.00 on the sea wall of the reserve, under heavy grey skies and facing into an icy and bone chilling N. wind, I was as cold as I've been all winter. By 1.00 that afternoon, under blue skies and sunshine it was almost Springlike. Today, heavy overnight rain had cleared before dawn and the whole day, whilst still a tad chilly, has seen unbroken blue skies and sunshine and in the conservatory this afternoon it was positively hot.
Below is The Flood Field earlier this morning from the Sea Wall Hide, looking still nicely wet and although you can't see them, still holding good numbers of wildfowl and waders. Over the next month or so, it will gradually dry out and provide nesting opportunities to several species of birds. 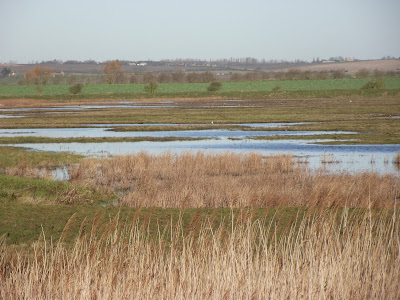 The view along the sea wall towards Shellness. About half a mile further along this wall is where the Richards Pipit has been observed on an almost daily basis since December. 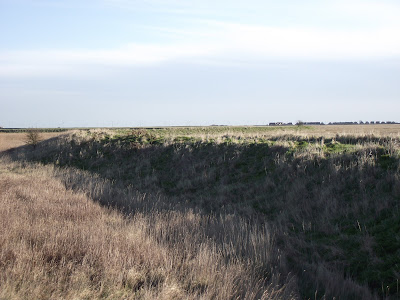 Coots having an argument. 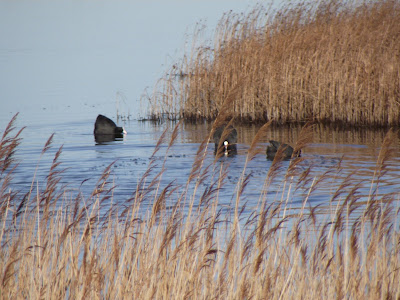 One of the reserve's larger ditches, looking quite splendid and soon to be noisy as nesting Coots and the loud croaking of Marsh Frogs take over. 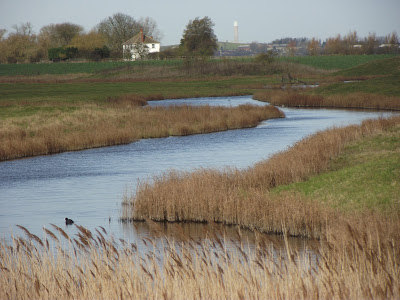 We've had some spectacular numbers of geese this week, especially the Brent Geese, seen below as they flight into the grazing marsh of the reserve. One sunny afternoon this week I had the beautiful sight of over 1400 mixed Brent, White-fronted and Greylag geese spread out across one field. 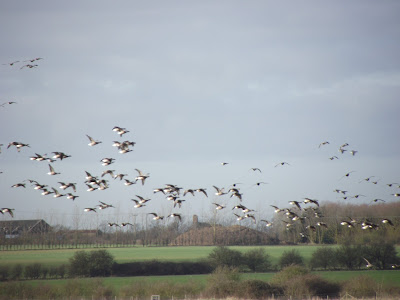 Once settled, the Brent Geese start to spread out, squabble, preen and feed on the grass. 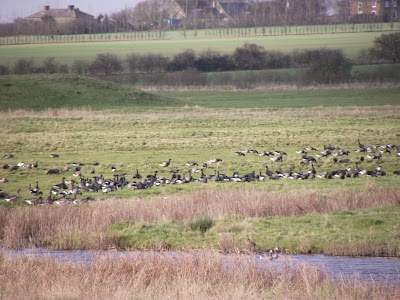 I was lucky in this photo to get all three species together. Brent at the top, Whitefronts in the middle and two Greylags below. 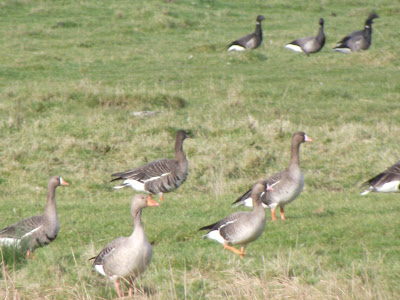 I've featured these old salt workings mounds before and there are several dotted about across the grazing marsh of the reserve. Little is written about them but they are several hundred years old and from a time before the sea wall existed and very high tides could still flood flood onto the marsh. We believe that the mounds are the spoil thrown up from the digging of large salt pans in which sea water was trapped and allowed to evaporate, leaving the salt behind. In more recent times they have served as refuges for livestock on the few occasions that the reserve has been severely flooded. 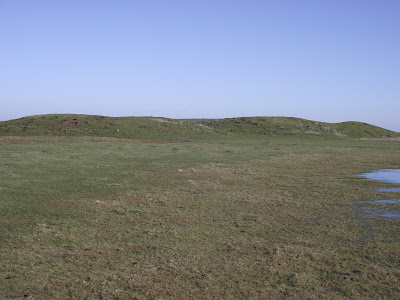 Nowadays this particular couple of mounds are home to around 30-40 rabbits and apart from one or two else elsewhere on the reserve, that is the sum of the reserve's rabbit population now. Quite amazing when you consider that around twenty years ago it was possible on a summer's evening, to walk round the reserve and count 800-1000 rabbits!
But they contacted some disease that caused them to haemorrhage and that coupled with the annual summer myxy. outbreak and ferreting, caused a rapid decline in the rabbit numbers. Unfortunately, even when numbers had dropped to just a couple hundred, management who panicked on seeing just a dozen or so rabbits and considered it a plague, still allowed over-zealous culling to take place. 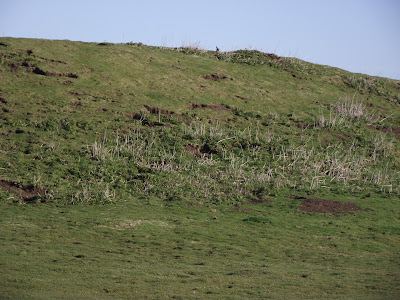