Well another month has almost gone by and we're getting closer to Spring by the day, and if nothing else, the evenings are very slowly getting lighter, such an exciting event to us outside type people. I was reminded today by a good blogging friend from the Yorkshire Dales that I haven't posted anything recently, she's right and so this is an attempt to address that fact.

I was outraged today when I read a columnist's article in my Daily Telegraph that brought to our attention that a professor from Cardiff University had suggested that not only was Kenneth Grahame secretly gay, but that if you read between the lines, his famous book and my all time favourite, Wind in the Willows, had numerous gay suggestions in it. One suggestion was that the Badger was an opportunist with a predilection for inter-species orgies, "well it's time were all in bed", he says to Mole and Rat, who then "tumbled in between the sheets in great joy and contentment". It was bad enough when they started banning Enid Blyton books because she spoke of coloured people and people with big ears but to pick on my all time favourite book, I'll have none of it - leave children's books for children to read in all innocence, not for adults with strange minds to dissect and to suggest perverted meanings. When you have a mind like that, my writing that I had a sausage for dinner last could easily be interpreted as me saying that I had oral sex - such weird people.

What of the reserve, well it's wetter and thanks to the cattle before they were taken off a few weeks ago, for a couple of months calving at the stock yards, it's bloody muddy in places. Have the ditches any water in now, yes they have, but only a couple of inches, we're not talking flooding or anything like it and so, still few waders and wildfowl are being attracted. Having said that, last week saw the return of around 150 White-fronted Geese to the reserve, drawn in by the daily, resident flock of Greylag Geese. These true wild geese from Northern Europe always attract attention from birdwatchers, but especially the wildfowlers, who see them as real and wild quarry. All the geese return to the neighbouring farmland each night to roost but with both the game shooting and wildfowl shooting seasons ending there in two days time, the pressures on the geese will decrease.All that will be left will be the wildfowling that continues below the high water mark the other side of the sea wall until the 20th February. I gave two wildfowlers permission this morning to come onto the reserve, minus their guns, to search for a Greylag Goose that one had shot and was seen to fall somewhere on the reserve. Between the three of us we eventually found it, dead, and it was therefore a bird that would be eaten and not wasted.
Today has been a superb day. It began with a moderate frost and the turned sunny with blue skies and stayed that was all day, almost Springlike at times, so much so that I had a first Bumblebee in the garden this afternoon.

I woke up at 3.30 this morning, it's always 3.30 or thereabouts, it's like my brain has a built in alarm clock set to that time and no matter what time I go to bed, when I wake up it will be 3.15, or 3.20, or 3.30. I live on 4-5 hours sleep a day, I'm always tired but that's how it is. I read a book for an hour and then just lay there until at 5.00 the central heating comes on. Pipes and radiators start too creak and pink as they expand and I wait for fifteen minutes for the chill to go off the house and then I get up. I don't have anything special to do but I'm just fed up with laying in bed awake. I look out of the window to assess the day. It's dark of course but at least it's dry, just lately it always seems to be damp or rainy but this morning there are stars in the sky.
So, what to do now that I'm up and it's dark outside and will be for another couple of hours. Look at the laptop I suppose, look at the few blogs that I follow, see what postings have been made over night. Just after 6.00 go to the paper shop, bring back The Telegraph and read it while I eat my porridge and wait until the daylight begins to brighten the sky.
By 7.15 there is a brightening of the sky in the east and so, with my dog in the car, we head off for the nature reserve, several miles away. It's a routine that I repeat seven days of the week most of the time. Routines, once you are well settled into retirement, as I am, creep up on you until you find yourself getting irate if the paper shop doesn't open on time, if pouring rain stops you going to the reserve at your normal time, and so on - boring old fart does seem a well used but suitable description.
Posted by Derek Faulkner at 12:10 10 comments:

The Wet Stuff at Last

Since my Boxing Day post we have had several damp or rainy days, which until today still hadn't made a lot of difference to the lack of water on the reserve.
However, early this morning we had 4-5 hours of steady and moderate rain that really has made a difference, at last a couple of the driest places on the reserve were holding some water. Below is the wide, shallow fleet that we know as the "S Bend Ditch" because it snakes for several hundred yards across the reserve. This week it has gone from bone dry to wet at last, not wet along it's full length or width and only a couple of inches deep but it's a start and will be of interest to some birds. 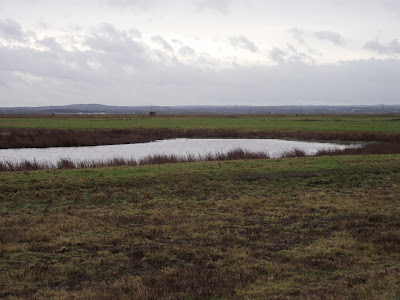 Likewise the large scrape in the "Flood Field," it's still only 50% covered in water but it means that now, any future rain will continue to deepen and cover it. There's still a lot of water needed but hopefully we could at last be turning the corner. 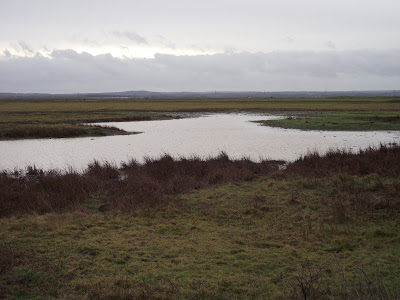