When in my last blog I suggested that polar weather was forecast and so it turned out, yesterday (Tues) saw our first snow for six years. It finally ended up about six inches deep and with a chill factor of up to -10 degrees forecast today, it is not going to be very pleasant.

The view from my study window. 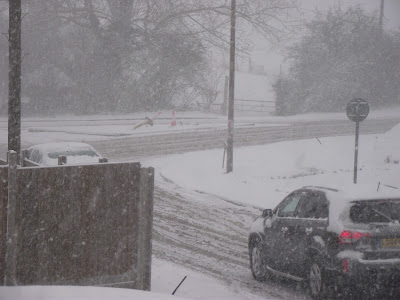 And part of the garden 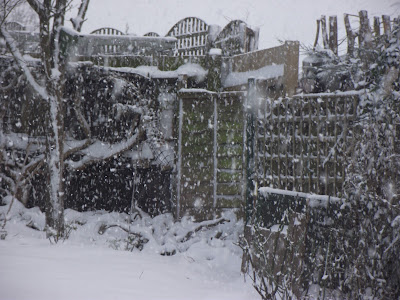 More of the garden 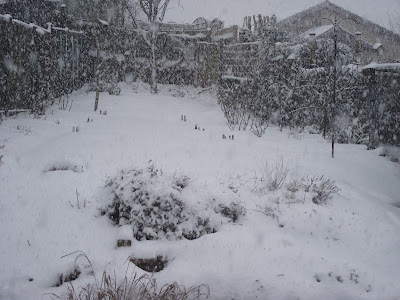 Ellie wondering where the lawn has gone 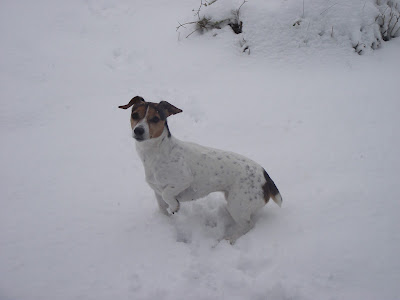 It is a winter's tale
That the snow blind twilight ferries over the lakes
And floating fields from the farm in the cup of the vales,
Gliding windless through the hand folded flakes............ Dylan Thomas

Listening to the weathermen over the last couple of days, it appears that we are entering some kind of polar Armageddon this week, deep snow and Siberian winds are going to blast across the UK, especially over us softies in the south of the country. In reality, to us older generation at least, this is not likely to be much more than what we used to consider as normal winters in our youth. Winters when as young children, we still walked to school through deep snow and blizzards, snugly wearing the woollen balaclavas and gloves that our mothers had knitted for us. To be greeted in the classroom by a welcoming teacher and a warm fire in the corner, because the schools rarely closed. On returning home, our mothers, who rarely went out to work, will of made some warming and nourishing food for all of the family to tuck into, although a hot bath was normally only a weekly event.
Not so these days unfortunately, a series of mild winters will have left a lot of people both inexperienced of such winters, or prepared for how to deal with them and no doubt as I write this, panic buying of all manner of foodstuffs will be taking place in many shops. Mothers who have to be out at work all day will be praying that schools don't close, but teachers will be encouraging the opposite.
We will soon see how this week all pans out.

I often mention the Isle of Sheppey where I live in North Kent and the poor quality map below shows where we are. To the immediate north of us is the Thames Estuary, which makes it's way past the top of the Isle of Grain towards London and further out from that are the lower stretches of the North Sea. By land we are 50 miles from London. The Island is about 10 miles long by about 8 miles wide and The Swale, which you can see at the bottom of the Island is tidal and winds it's way right round it, creating the Island that it is. The Isle of Harty, which is not actually an island and the little red duck shown there, is where the nature reserve is. 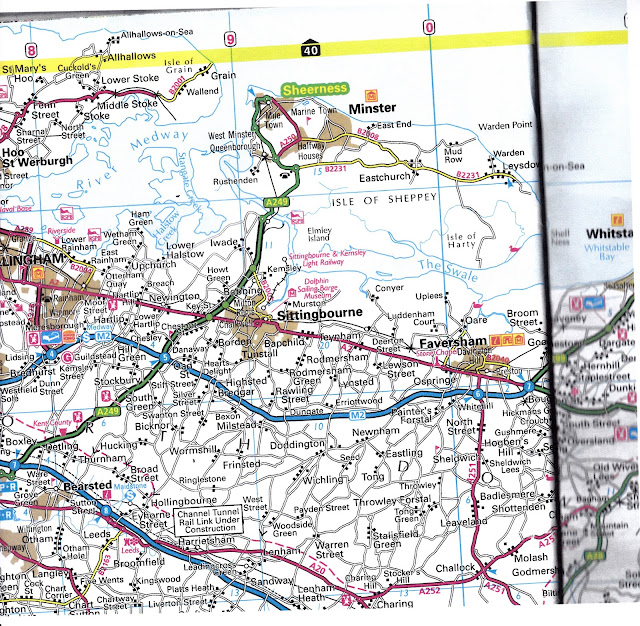 The last couple of days have been beautifully cloudless and sunny but bitterly cold and I took this photo at dawn yesterday. looking towards the reserve. 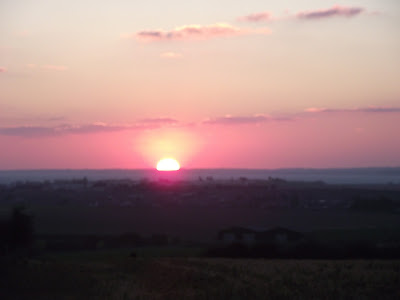 The flock of 170+ White-fronted Geese and some Barnacle Geese, are still present on the reserve and here you can see a few of them with odd Greylag Geese in the early morning light. 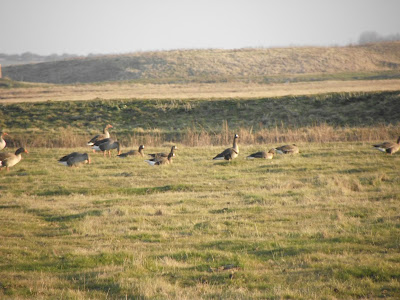 And lastly, despite the very cold weather, the catkins on the willows alongside the reserve are starting to appear. 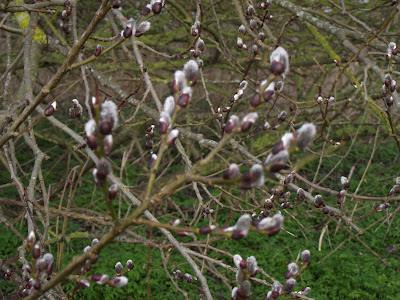 "I make this in a warring absence when
Each ancient, stone-necked minute of love's season
Harbours my anchored tongue,slips the quaystone"

When I slipped from my partner's house in Surrey very early yesterday morning, left her sleeping soundly in some other blissful world, it was drizzling and a wet and dark journey home to the marshes of Kent some 80 miles away ensued. The low cloud and murky conditions, the heavy drizzle and light rain, continued throughout the day, throughout last night and into this morning, finally petering out today at lunchtime. It was not the ditch filling rain that I'd craved all winter, it was simply a dark, dank and clothes soaking entity that permeated everything and anybody, that happened to be out in it for any length of time. It was with some trepidation therefore that I ventured out down to the reserve yesterday afternoon to be part of the reserve's three man, monthly Wetland Bird Survey(WEBS) team. My sector of that involved me walking round the wet and muddy grazing fields and sea wall of the middle part of the reserve, counting whatever birds that I saw.
Now, anybody who knows the marshes of Sheppey in the winter will know that they are pretty uncompromising places. They are flat, there are no sheltering places and bone-chilling Easterly winds blow in, unchecked, straight off the Thames Estuary. Well, we didn't have the wind yesterday but we did have relentless and misty heavy drizzle. It gradually ran down my neck and soaked into my roll neck jumper and it dampened my note book each time I got it out and only the birds that I was seeing relieved the discomfort that I felt. 340 Greylag Geese, 175 White-fronted Geese and 17 Barnacle Geese, all together in one large flock stirred my old, marsh-man's memory of days gone by and dried my heart and mind.
But there are times, when as an arthritic seventy year old, that you do question why you are there in such conditions and the answer simply is, very few, much younger people these days, see it as exciting or interesting enough. It's a sad fact of life these days that those of us who have spent a lifetime gathering facts about wildlife in such uncompromising conditions, will have to continue doing so through the rest of our doddery and arthritic lives, because we have always done it and few are willing to replace us.
But with such age comes the memories, and more importantly the routine afternoon glass of wine or beer, the afternoon sitting in the conservatory tracking back through seventy years, the cat-naps with the dog on my lap.  Drifting off to sleep thinking about standing on the sea wall in blizzard showers on a winter's late afternoon as I looked for harriers going into roost, the wading through flooded winter fields, the great orange winter sunrise, being burnt to a crisp by blazing summer suns and slumbering on the sea wall watching bees and butterflies.

"now in the cloud's big breast lie quiet countries,
delivered seas my love from her proud place
walks with no wound, nor lightning in her face,
a calm wind blows that raised the trees like hair
once where the soft snow's blood was turned to ice."........ Dylan Thomas

"oh a false clock tries to to tick out my time
to disgrace, distract, and bother me
and the dirt of gossip blows into my face
and the dust of rumors covers me
but if the arrow is straight
and the point is slick
it can pierce through dust no matter how thick
so I'll make my stand
and remain as I am
and bid farewell and not give a damn"

Ever since, I've tried to live by the sentiments in those last three lines, it's alienated some people, confused others, but not give a damn seems appropriate.

My blog feels like it is coming to an end, my best stuff (in my opinion) is in the past and new stuff is difficult to magic up - lack of enthusiasm, lack of subject material and a refusal to write blogs, like many people, that consist of  daily and personal diary facts written out in public. You know, the, I got up this morning, had my breakfast, read the papers, went out for lunch, ate this and that, came home put the fire on, walked the dog, watched the Winter Olympics and here's what happened in case you don't have the intelligence to understand what's going on, the domestic appliance repair man is coming today, and so on and on.
The blog was always about Sheppey's local history, my life in a stolen moment and of course, the Swale NNR. Unfortunately, the reserve, for various reasons, has become fairly boring, with little interesting or new to write about, low or non-existent water levels have rendered it devoid of the large bird numbers that it used to support. A chat with the local wildfowlers can often be the highlight of a winter dawn and usually that merely consists of "where've all the birds gone."

Birdwatching has also changed, these days, trying to get people interested in census's that involve walking around counting ordinary bird numbers, is difficult.  "Birdwatch cruising" as I call it, seems to be the norm along the Harty Road now. People cruise along the Harty Road in what seems like first gear. at a snails pace, in a warm car, looking for birds on the marsh on either side and totally oblivious to the fact that other cars are actually behind them and wanting to pass. Often, if a half decent bird is passing by, they stop their cars in the middle of the road and ignore those behind, or very reluctantly, with evil stares, pull over to the side of the road. I presume that most of them still have legs that work.
I, at nearly 71 and with arthritic limbs, still spend a few hours walking round the reserve most days, in bitter cold winds and mud and water to do my bird counting and census's - perhaps I'm just one of the last of an old school brand of birdwatcher.

So perhaps it's time for a Restless Farewell.
Posted by Derek Faulkner at 13:15 27 comments: