May time - the best time

May has to be, in my opinion at least, easily the best month of the year. Intense, fresh greenery everywhere, May blossom, fruit tree blossom, great fields of golden rape, young of birds and animals - what is there to dislike.

May blossom along the reserve's boundary hedge 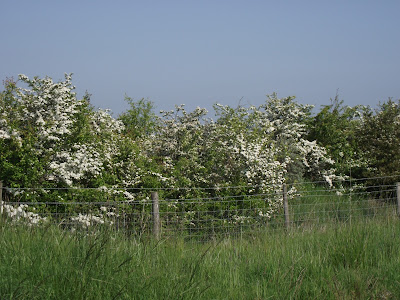 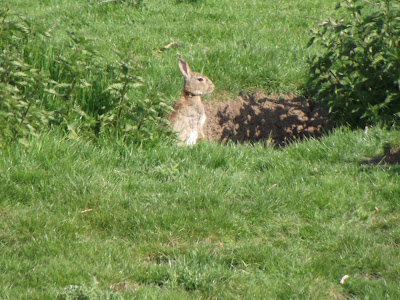 A ditch, one of the reserve's vital arteries 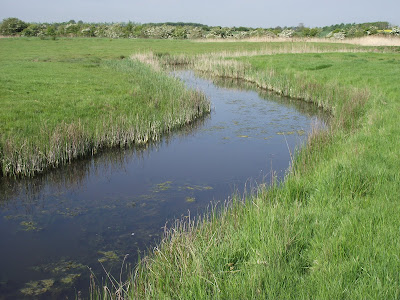 The main talking point this last couple of weeks has been the speed at which the grass has grown on the grazing meadows of the reserve. In an ideal world these fields should be grazed to a much shorter sward in order to suit the needs of the ground nesting birds such as Lapwings. 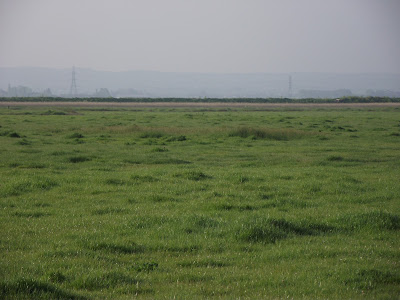 The grazier has a few dozen cattle and their calves on the reserve but they're currently making little impression on the grass. Very soon however, more will be rushed out from the winter stock pens and how delighted they will be to see sunshine and lovely green grass. 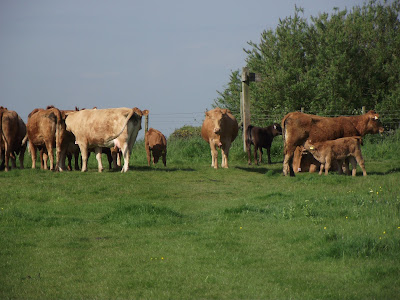 The two main breeding species on the reserve, Lapwings and Redshanks, are doing well, although we are still losing some Lapwing chicks to predation. Given that Redshanks prefer to put their nests in tufts of grass, it's possible that the longer conditions are suiting them at the moment and it'll be surprising if they don't top the Lapwings in respect of breeding pairs this year. Avocet breeding pairs are at the same good levels as last year and once again it just needs to see how many chicks survive the predators. Elsewhere, Reed Warblers and Yellow Wagtail pairs are so far, down on last year but late arrivals can quickly turn this round.
In the meantime the wind-pump does it's daily job of keeping the ditches replenished with good fresh water from the underground aquifer, another benefit for the livestock. 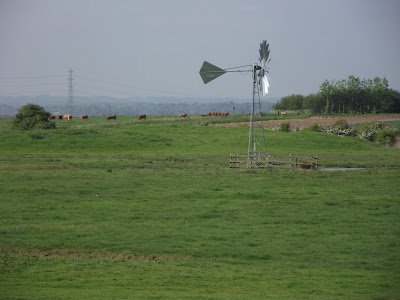 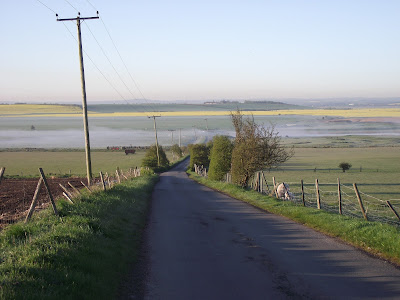 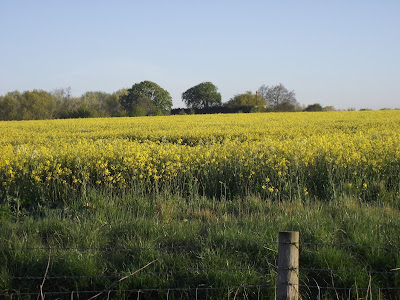 Driving along the Harty Road yesterday (Sunday) morning at 6.15 was a real treat after the crap weather we have endured this last week. Some mornings on the sea wall it felt as though the icy NE wind was trying to freeze dry the side of my face and then there were the regular heavy showers of snow, rain, hailstones, thunder and lightning, it has been awful. But yesterday, despite a fast disappearing slight frost, the sun already had warmth under brilliant blue skies. As I drove along the road you can see a brief spell of mist lifting off of Capel Fleet as I made my down Capel Hill and in seconds I drove through it and out the other side. Arriving then at the reserve it was nice to turn around and see great fields of rape in flower, the sun coming down and being reflected back up, everywhere felt golden.
Most noticeable was the birdsong, a few Whitethroats had ventured out of the entry thicket and down the fence line and were singing from odd hawthorn bushes. In the tall reed beds alongside the barn, Sedge Warblers sprang into the air and gave their scratchy song before parachuting back into cover and below them, mostly heard and not seen, Reed Warblers repeated their monotonous notes over and over. That scenario repeated itself in the numerous reed beds all round the reserve, whereas these warblers had seemed to be just solo players over the last few weeks, yesterday the sun and warmth had encouraged a whole orchestra of them. Then there was the marsh itself - Lapwing, Redshanks, Oystercatchers, Skylarks - all singing or calling like mad from every direction. a whole cacophony of sound that shouted at you that finally this was it, Spring was really here, we're warbling towards Summer.

This week will see the second of several routine Lapwing and Redshank breeding counts take place both on this, The Swale NNR and at nearby Elmley NNR and we would expect that numbers of breeding pairs and chicks will have increased since the last count three weeks ago. Yesterday the pest control traps were taken away from The Swale and trapping finished for this breeding season as catches had diminished significantly. Over the last eight weeks a record number of crows and other mammalian predators have been removed from the reserve and for sure we should see that more eggs and chicks will survive this year as a result. After Lapwings, one bird that always seems to suffer from crow attacks badly are Coots. Their nests, often built as raised platform in open ditches, always stand out from some distance, especially when topped with a nice clutch of several eggs. Crows spot these easily and will raid the nest repeatedly until all the eggs have been taken, likewise newly hatched chicks. This last week I have pretty much finalised my Coot breeding counts and so far have found 39 nests with eggs, which is a record number in recent years, so hopefully this is a sign that our assault on crows this year has been successful.
Despite finding several duck nests, of Mallard, Shoveler and Gadwall, I've still yet to see any ducklings so far, hopefully this will soon change. Greylag Geese however, are doing very well, and there are now several broods of their delightful, golden goslings tagging along behind ever attentive parents.

So that was a small flavour of how one day's really good weather can suddenly change the whole enjoyment of walking round the same place each day. It put a spring both into the step and the season and much more was going on that I haven't and in a couple of cases, can't mention, and with an increasingly warm and sunny week ahead forecast, there is much to look forward to.
Posted by Derek Faulkner at 07:09 6 comments: