Well as a blogging friend of mine from Yorkshire keeps reminding me, my posts are getting very irregular. Put it down to lack of enthusiasm. But here's we is, back again, and so let's start with the reserve.
Summer has finally left, it hung on for as long as it could but Autumn has won the day and with it's coming we have had some regular rain. Not the "fill-dyke" rain that we still need, as the photo shows 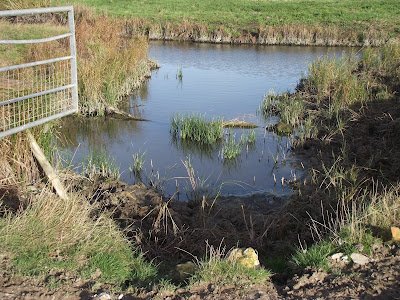 ..... but it has had the effect of freshening the marsh up, the dry staleness of late summer has gone and the ground is getting softer and the grass is growing again, there is a green-ness about the marsh. A few mushrooms are also beginning to appear. 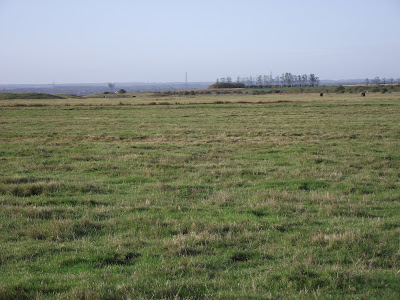 It has certainly been a welcome relief for the cattle on the reserve - real, green grass again after the dry, dead stuff that they had been existing on over the dry summer. This week they have been temporary corralled up in order that the adult cows can be scanned as part of their pregnancy testing. 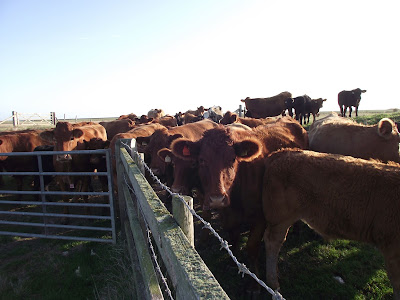 Following that, in a few weeks time, this year's calves will be taken away from the herd and weaned off, giving their parents a few months rest before they begin calving again in the early Spring. As you can see from the photo, the calves are now quite well grown. 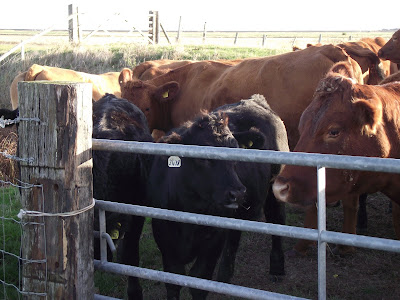 On the surrounding arable farmland the rain has had an almost instant effect on fields that have stood tilled and dry for several weeks. Wheat seed that has sat in the dry soil un-germinated has quickly done just that and those brown fields have a film of green across them now as millions of green shoots now begin to emerge from the soil.
Bird life on the reserve still remains in low numbers, hampered by the lack of large areas of open water but the odd surprises still appear at times. Recently we have had a couple of Great White Egrets stay for a few days and this week I also had a Bittern drop into the large reed beds alongside the sea wall. One or two pairs of Stonechats have also started appearing along the fence lines, they are regular winter visitors and before long the Fieldfares and Redwings will join them.
So, for a few weeks ahead now, possibly months if recent Autumns are anything to go by, we can enjoy the mellowness of Autumn before the winter starts. And as the Autumn intensifies, what else can we expect to experience, well the mists for one. Thick marshland, Dickensian mists that dare you to step onto the marsh and disappear into them. That swallow you up and surround you in ghostliness as you attempt to find familiar markers that take you in the right direction.
Later, there are the winter winds, bitter cold easterlies that arrive under leaden skies from the nearby sea. There's very little shelter on the marsh from such winds, they go through you rather than round you, freezing your aching bones and making the heat and humidity of summer seem like something that you dreamed, not actually experienced.
But for now, it's still early Autumn and last week, still a glutton for wild and desolate places, my partner and I enjoyed a week in a farm cottage on Bodmin Moor, in Cornwall. I love Cornwall and have rented cottages there on many occasions. I love it's wildness and living as I do, on an island in the Thames Estuary surrounded by the sea, Cornwall makes me feel at home, the sea is never far away there. The cottage that we stayed in was directly opposite the Jamaica Inn and easily the best cottage that I have ever stayed in down there, just the cottage and alongside, the owner's farmhouse. Driving across Bodmin Moor in driving rain and wind is not for the faint-hearted but it made me feel at home and besides, a log fire and a few real ales in the Jamaica Inn soon make things feel better, if a little wobbly on your feet.
Posted by Derek Faulkner at 10:47 11 comments: