There are several reasons why my blog has become quite infrequent lately, one of them is because I have been busy writing elsewhere and secondly because it became difficult not to write about the event affecting the reserve most this last nine six months or more, the lack of rain. Unfortunately this one too is going to start off on that same theme.
Last autumn began dry and that dryness intensified as we progressed through the winter, it meant that the wet areas needed to attract winter wildfowl and waders were almost non-existent and we had some of the lowest counts for years. Now in mid-April, the Spring, things look even bleaker and the prospect of a summer drought look almost certain. Several years ago we dug a series of shallow rills across the grazing fields of the reserve and after an average wet winter these should still be half full of water. Their purpose being to provide insect life along their muddy edges for newly hatched Lapwing and Redshank chicks to feed on - this is how they currently look. 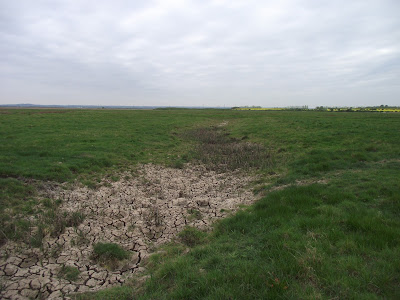 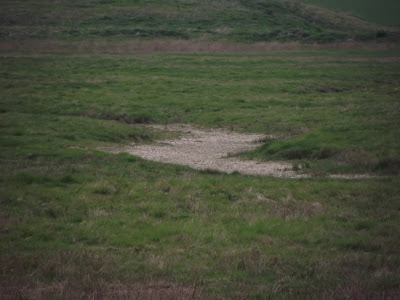 The ditches are just as bad, the example below is how we would expect them to look in late summer, not early spring. They should be three quarters full at the moment and providing good nest sites for birds such as Coots but a few inches of water has little appeal to the birds. 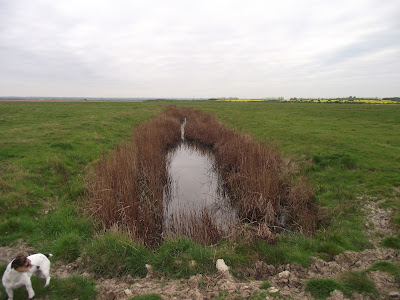 Even the foot path along the top of the seawall is suffering, with cracking appearing along it's length. And if you look at the current weather forecast for North Kent and the South East until the early part of May, it's basically one of little if any rainfall and below average temperatures. No wonder we have few signs of the normal marshland birds attempting breeding yet. 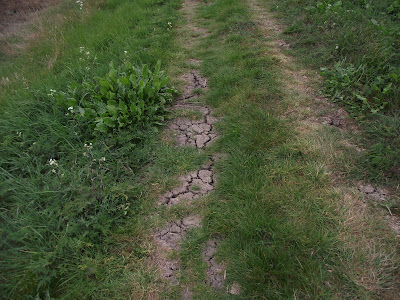 To maintain the depressing news for a moment longer, take a look at this line of small oak trees on the nearby farmland. They were having a minimal effect, if any, on the farmland alongside them but last week the farmer decided to trim them back for whatever reason. The now traditional tractor driven hedging flail was used and struggled quite a bit against the thickness of many of the branches, leaving them looking quite mangled and doing the trees little good I imagine. 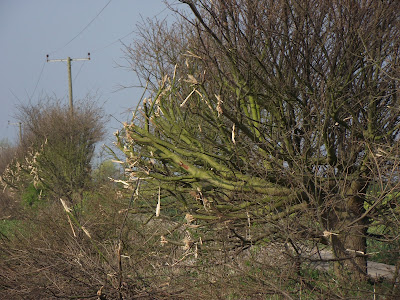 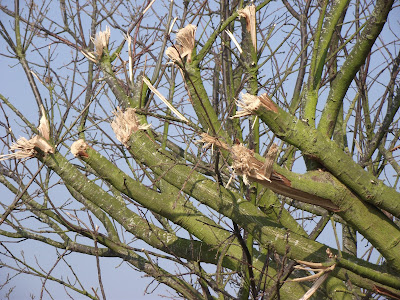 But we might not get the rain but we have at least had some nice sunny days and last weekend had for one day, heat befitting mid-summer and although it hasn't lasted it did bring about the first cows and their calves being put on the reserve for the summer. 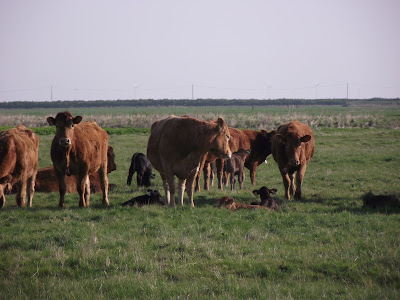 And although the dominant cold Northerly winds have seen summer bird visitors arriving in barely a trickle so far this year, they are starting to come, as this newly arrived Yellow Wagtail shows. 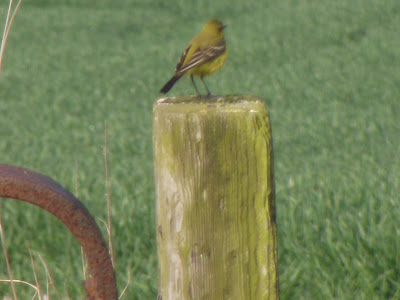