Winter is Slipping By

It was still three parts dark as I made my way along the Harty Road yesterday (Sunday) morning to the reserve. However, by the time that I had made my way across the reserve to the sea wall the sky had lightened considerably, although it was heavily grey rather than blue, but it was very mild. It was the second to last day of the wildfowling season and I had arrived early to see if many wildfowlers were taking the opportunity to bag a duck or two on this last weekend of the season. There was just the one, who throughout the hour and a half I was there never fired a shot, which pretty much summed up their season adjacent to the reserve.
Progressing much further along the sea wall to where I could see another birdwatcher, who I knew would be looking at Hen Harriers leaving their overnight roost, sun-rise began to happen. The mainly grey sky had broken into several slits and in one of those brief slits a great red sun briefly appeared, like a blood shot eye in a grey face, until it blinked and was gone again. I chatted with the other birdwatcher, who had as expected seen Hen Harriers leave their roost, three ringtails, and then departed back along the sea wall for home, I was due back that evening for the monthly harrier roost count.
The day had been almost warm, with good sunny spells, as I made my back along the Harty road again at 16.45. There were numerous bird watchers along the road side as I drove past, the legacy no doubt of last week's BBC television's Countryfile feature about what a superb place to view birds of prey, Harty was. Just a shame that so many choose, out of laziness I suppose, to use the small, vehicle passing places as car parks rather than the car park supplied at the Raptor Viewing Mound.
It was a pleasantly mild and windless late afternoon as I climbed the sea wall again and the light was just starting to fade. Several hundred yards away three wildfowlers were no doubt swapping tales of how the season had been for them and so I walked along and briefly joined them for a chat. It was clear that with just one day to go, that the shooting season in front of the reserve had been pretty dire and in no way matching the above average bags seen elsewhere around Kent. It was also clear, just standing there looking across the reserve as we spoke, of the reason why, we could of been looking at the reserve in mid-summer, no flooded areas and no deep ditches. The reserve's wildfowl counts this winter have been some of the lowest for years, if not ever, and it was quite apparent to us all that by the time the wildfowlers returned next September that the reserve could resemble a desert unless it's an exceptionally wet summer.
As the dusk began to rapidly settle across the marsh the wildfowlers and their dogs left me and walked out to their chosen spots on the saltings, in the hope that an odd duck or goose might fly over them, while I remained on the sea wall. I began to earnestly watch the normal harrier roost site through my telescope pausing briefly for seconds at a time to take in the other bird world out on The Swale. The tide was rising and several hundred waders were noisily being pushed off of the mudflats where they fed, still desperate for that last morsel before they went to roost. In the increasing gloom and way across on the mainland side, several hundred Brent Geese rose up, almost disappearing into the darkness and came across to the Sheppey side before settling down on the tide and letting it flow them along with it. For a moment birds were calling from everywhere, Coots and the odd Water Rail along the sea wall fleet, pheasants and a few Mallard out in the marsh and suddenly, I had a Short-eared Owl hunting in circles round me. Ellie, who was off hunting for voles herself in the sea wall grass, suddenly had company, for a while the owl followed her, hoping that she would flush out a vole that it could catch.
And then, it was suddenly almost dark, I had seen the three Hen Harriers go back into the same roost that they had left early in the day, it was time to leave. I waived to the barely visible wildfowlers tucked down in the gullies and threaded my way back across the marsh in the darkness, Ellie a constant white flash, ahead of me and nose to the ground, still hoping to pick up the scent of something worthy of chasing. It'd had been a good day.
Posted by Derek Faulkner at 16:07 1 comment:

Yesterday morning at first light I stood on the reserve sea wall talking to three wildfowlers. The reserve was white with a light fall of snow that had only just stopped, a bone numbing N.E. wind was picking up and icy rain had just started to blow in on the wind. It was exceptionally cold and we didn't chat for long, just long enough for me to ask them if they had shot anything that morning, no was the answer. Three hours sitting out in the mud in falling snow and the dark and not a single shot fired had left them frozen stiff. People who lump these coastal wildfowlers in with the molly-coddled large bird number, shooters elsewhere, should try experiencing those conditions and also see how few birds that actually get shoot.
This last week I got embroiled in a debate on the Kent Ornithological Society's Facebook Page to do with the continuing persecution of Hen Harriers in this country. Despite the fact that I also deplore the persecution of such a beautiful and fast declining bird of prey, I found myself airing different opinions on the subject with two guys in particular, who were quite clearly disciples of Chris Packham and Mark Avery. I haven't got a problem with much of that, most of these people work hard at battling against the persecution dished out against Hen Harriers by grouse moor owners and their employees and keeping it in the public eye. Where I did start to disagree with their points of view though was (a) when I suggested that despite all their petitions, etc, Harriers were still going missing, grouse shooters were still sticking two fingers up, (b) when they found it impossible to accept any criticism of the RSPB, (c) when I accused them of taking the traditional birdwatcher's stance in that every missing/dead Hen Harrier has to have been caused by actions taken by those involved with grouse shooting. Particularly in the case of missing birds, evidence has never been produced to support the purely assumptions that it was grouse shooters that caused them to be missing. Of course, as soon as I starting stating those opinions, then accusations of me being both cynical about the anti grouse moor protesters and therefore a supporter of Hen Harrier persecution, came out. The fact that I have no problems with a few forms of shooting and pest controls does seem to mark me down as not a true and serious bird watcher in some people's eyes. There seems to be a trend in modern day birdwatching these days that in order to be one you have to openly loathe any form of shooting, without actually having any experience of the subject that they are loathing.
I'm regularly vilified for being too opinionated, a trait I can't deny but find too easy to fall into. I'm all to often criticised because (a) I don't like twitching, (b) don't always share rare birds that I've seen, not that I see that many, and (c) don't take the normal birdwatcher line and automatically despise anyone that shoots or kills wildlife. All my life I've always been a natural loner when it comes to wandering about in the countryside, and I take part in several lonesome annual bird counts and supply those records to the appropriate people. What I don't do is carry a pager or smart phone that allows me to immediately alert the outside bird watching world to what I've just seen, they're capable of getting off their arses and doing that themselves. Neither do I rush off to the latest rare bird alert, no matter how close, and join a murmaration of twitchers swirling about on a roadside or riverbank. Neither do I carry a long lens camera with which to impress people with my stunning photos that I always claim are still not quite sharp enough, I have a free running dog (a huge black mark in birdwatching circles) and lastly, probably the greatest sin of all, I'm an Associate Member of the Kent Wildfowling and Conservation Association, despite having no interest in shooting myself.
And finally, just to bring down the curtain on Opinion Differences, I'm currently reading and thoroughly enjoying, an old book called Morning Flight, written by that great conservationist Peter Scott, about his very many wildfowling days in the 1930's.
Posted by Derek Faulkner at 14:40 16 comments:

I don't know why but this winter here on Sheppey seems to be showing a great reluctance to allow it to gradually get light earlier each week in the mornings.The evenings definitely are but not the mornings. OK that fact has been exacerbated this week by a series of very gloomy and sun-less days but the mornings are definitely not keeping pace with the evenings. Look at the view that greeted me at 8.00 this morning as I arrived at the reserve and looked across the grazing marsh, instead of broad daylight and a rising sun, it was poor light, poor visibility and pretty depressing. 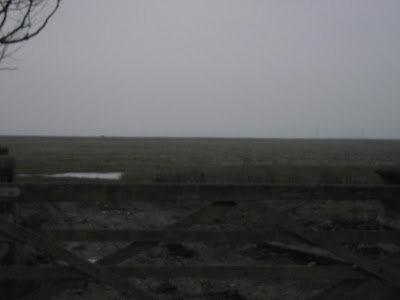 It never really got that much better throughout my walk round, below is a view of a ditch by the entrance gate some time later as I made my back. 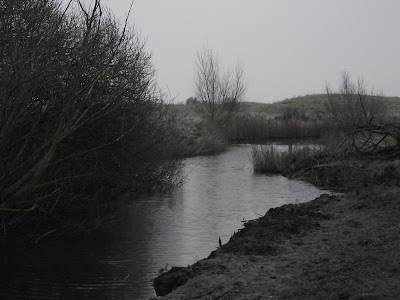 That is a pretty bleak view of how the reserve has looked and felt this last few days. Heavy grey cloud, a bitter cold N.E. wind and spits and spots of light rain or drizzle - for a warm weather lover and SAD sufferer as I am, it ain't been much fun. February in my book, shares with November as being one of the worst two months of the year, especially when it teases us with the odd warm, sunny and almost Springlike day, before dumping us back into winter.
Fortunately, nature doesn't get depressed like some of us do at such conditions, behind that bleak facade it can sense Spring is close by. Snowdrops and Aconites are in full bloom, hazel catkins hang from their bushes and the Rooks are already repairing their nests. All it will take to cheer us up is one or two warm and sunny days, a bumblebee, a butterfly - I do wish it would hurry up.
Posted by Derek Faulkner at 12:27 12 comments: