In stark contrast to my posting of last week featuring sunshine and warmth, this week has been pretty dire weather-wise. Several days of low cloud, poor light, cool N. winds and constant drizzle or rain have seen the reserve return to an almost late winter picture of large puddles along most of the access tracks and muddy gateways created by the grazing cattle. As a result, for someone who prefers constant warm sunshine at this time of the year, the last couple of visits to the reserve have been brief and pretty joyless events. 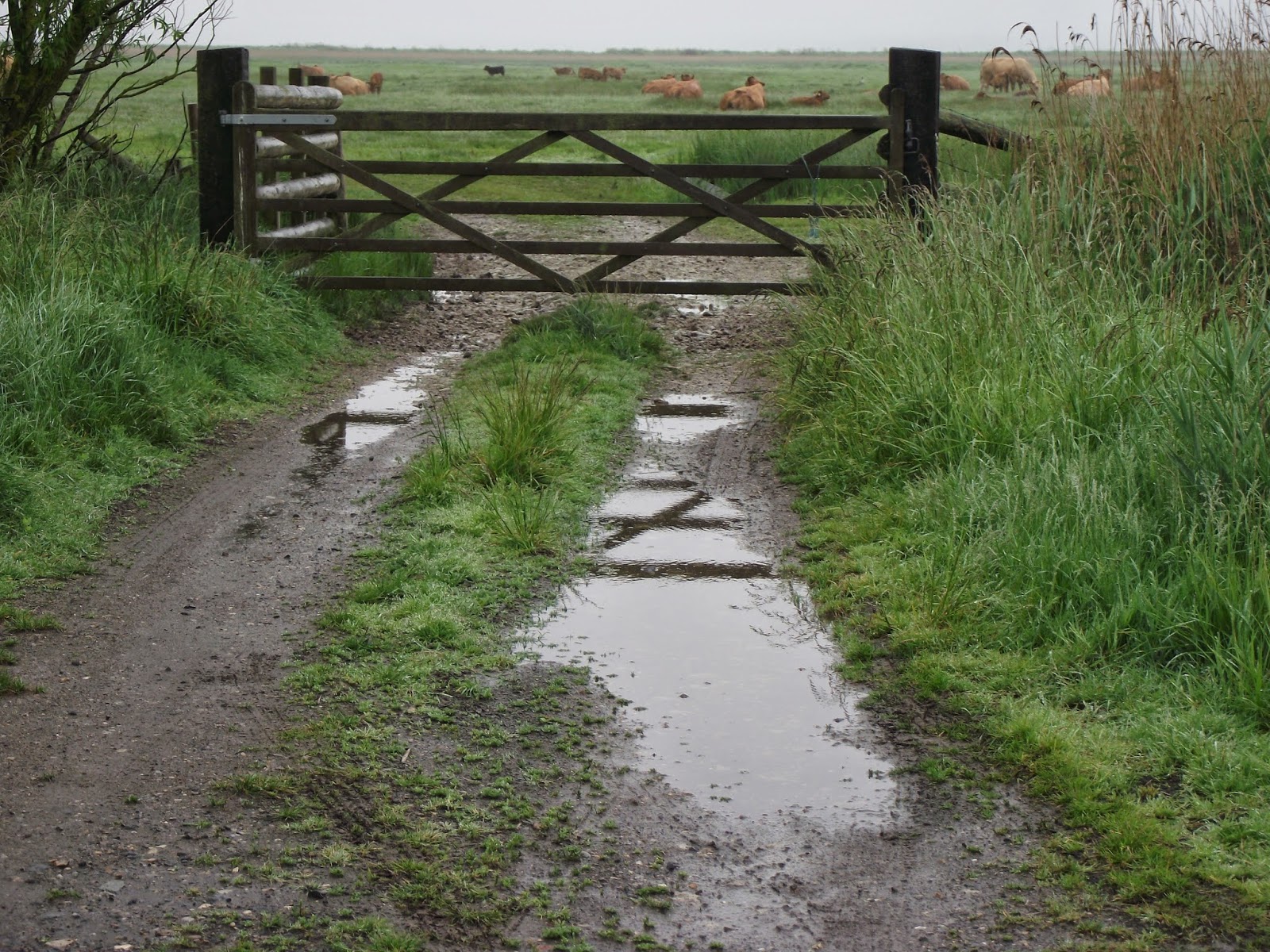 Even the return to the wearing of the hated wellie boots hasn't helped, the vegetation is so long and soaked now that it means that you still return home with an area of trousers above the wellies, soaked through. In other places the weight of the water has seen areas of the vegetation collapse and flatten to the ground which also doesn't help some wildlife. 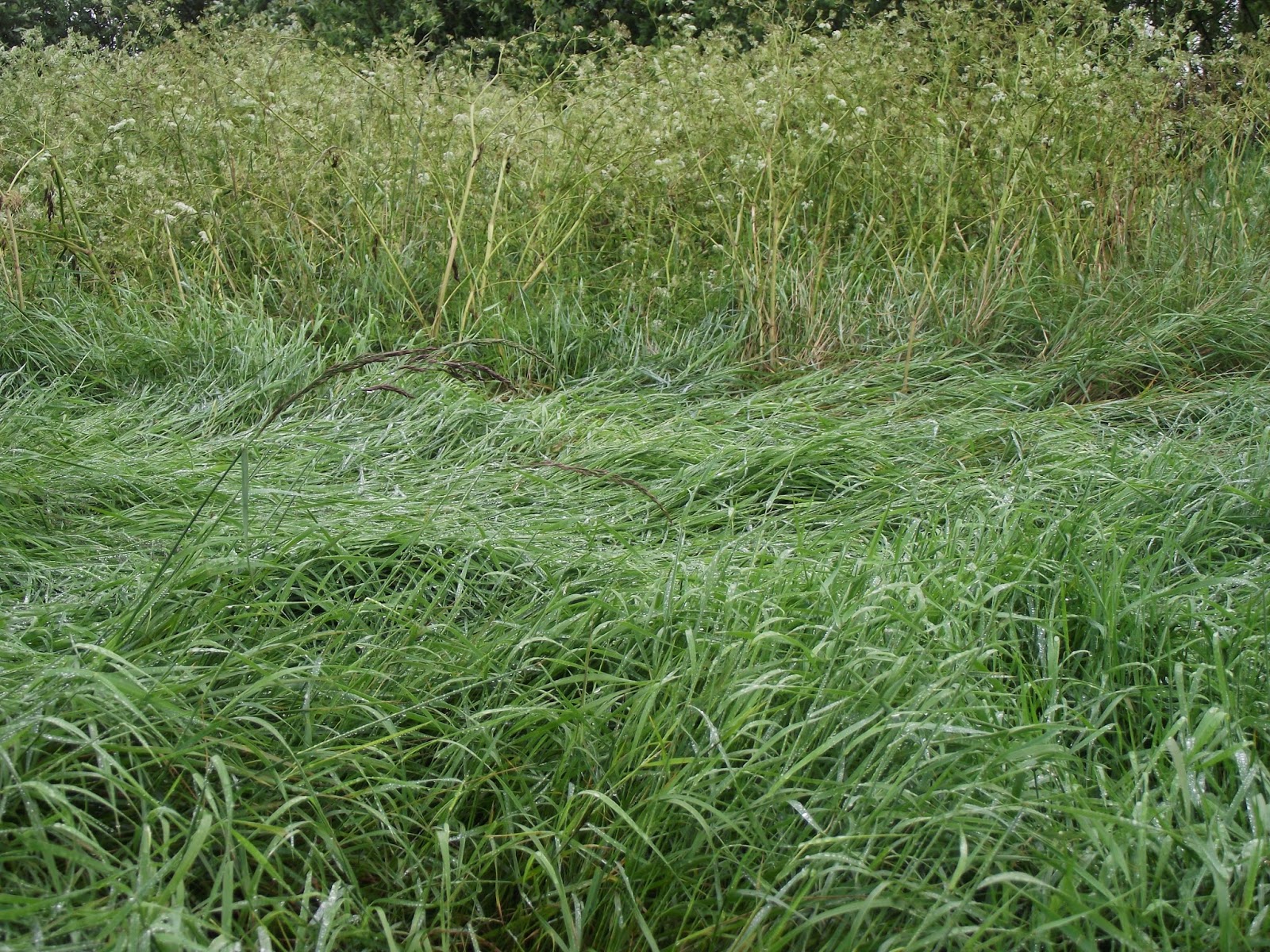 This was emphasised yesterday morning as two broods of just a few days old pheasant chicks emerged from the soaking grass alongside a track looking like pretty cold and wet balls of fluff themselves. Unless they can get some respite from being continually wet and cold those conditions can quickly see the demise of many ground nesting birds eggs and chicks. Lets hope that we quickly see a return to the warm and sunny weather of recent weeks.

One day last week I had the privilege of standing beneath the nest of a Buzzard, high in the branches of a tall tree, near Eastchurch. From what I've been told there are several  pairs of Buzzards now breeding on Sheppey, something that would of been inconceivable ten years ago. As I stood there beneath the nest, with a parent bird circling and "mewing" close by, I pondered on how much bird life on Sheppey had changed over the last thirty odd years. Thirty years ago Marsh Harriers were an uncommon summer visitor, normally only seen on passage in Spring and Autumn, nowadays they are not only a common and resident bird but breed in good numbers. Likewise Avocets. In the 1984 Kent Bird Report the highest numbers of Avocets recorded that year were 34 and 37 in November and December in North Kent. We now have breeding colonies of 30+ pairs on Sheppey alone, let alone wintering flocks of 2,000+ in the Medway. Little Egrets can be seen in even the smallest of ditches throughout Sheppey, are as common as Herons on the marshes and are now being joined irregularly by Great White Egrets and even Common Cranes.
It's changed an awful lot since I cycled out into Sheppey's countryside in the early 1960's as a teenager, hoping to see a rare bird called the Collared Dove.
Posted by Derek Faulkner at 16:18 2 comments:

In the Summer Time

I was on the reserve at 6.00 this morning and despite a chilly wind it soon became a beautiful sunny morning. The first sighting was of a yacht making it's way out of The Swale past Shellness Point, you can just make out Reculver Towers in the distance. 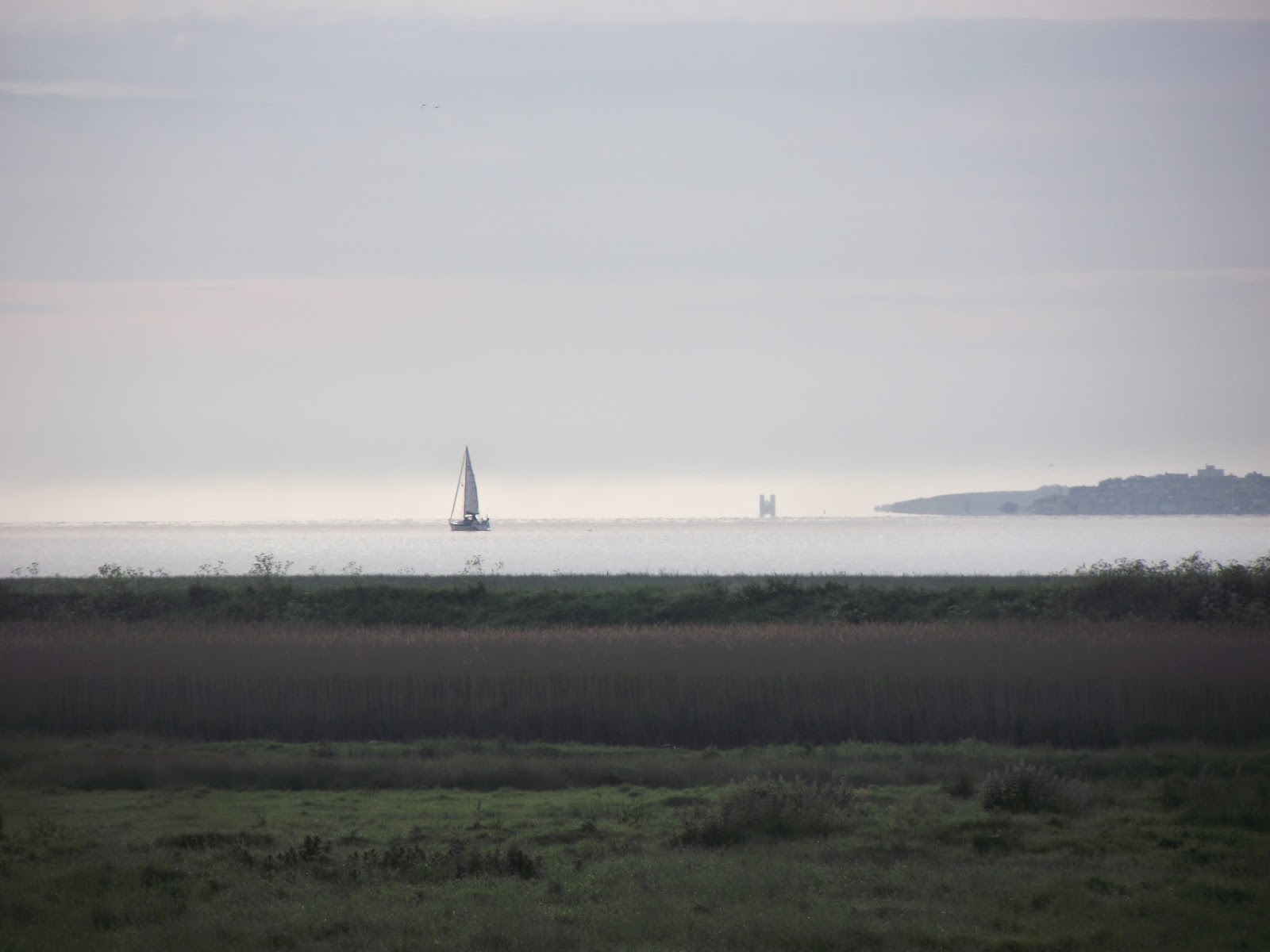 This week saw the installation of a fantastic new addition to the reserve - a wind pump. It should enable a particularly dry end of the reserve to be gradually maintained in a wetter condition, making it ideal for the Lapwing and Redshank chicks each Spring and indeed many other birds throughout the dry summer season. It also brings back to the marsh something that was a traditional and familiar sight throughout Sheppey's marshes years ago. There used to be numerous of these wind pumps across the marshes in the 1800 and early 1900's, supplying the various small farm cottages with their only source of drinking water and even when I was young several still survived. Even now the rusty towers of one or two still stand without their wind vanes, one being down at the "Brickfields" at Elmley. 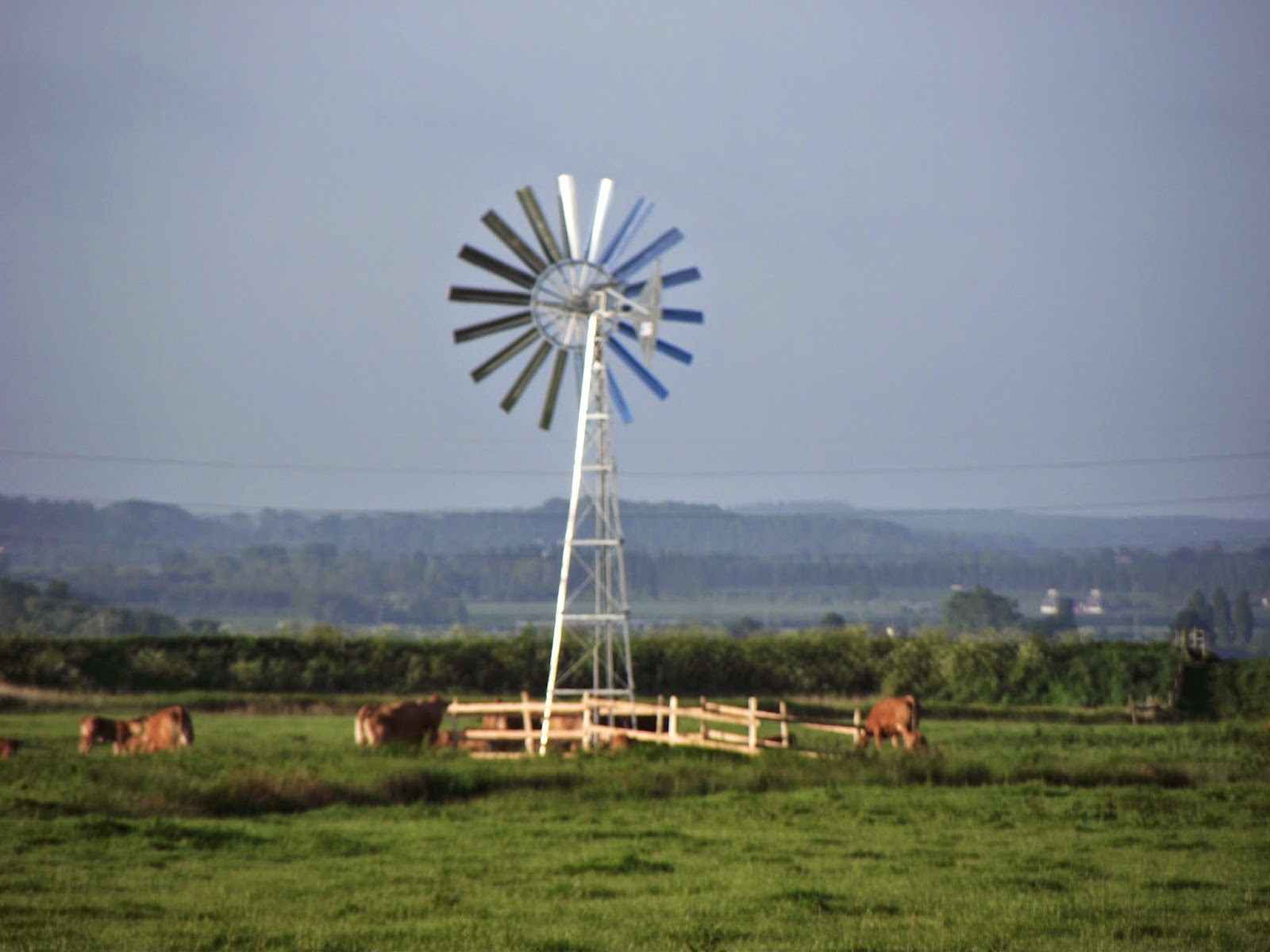 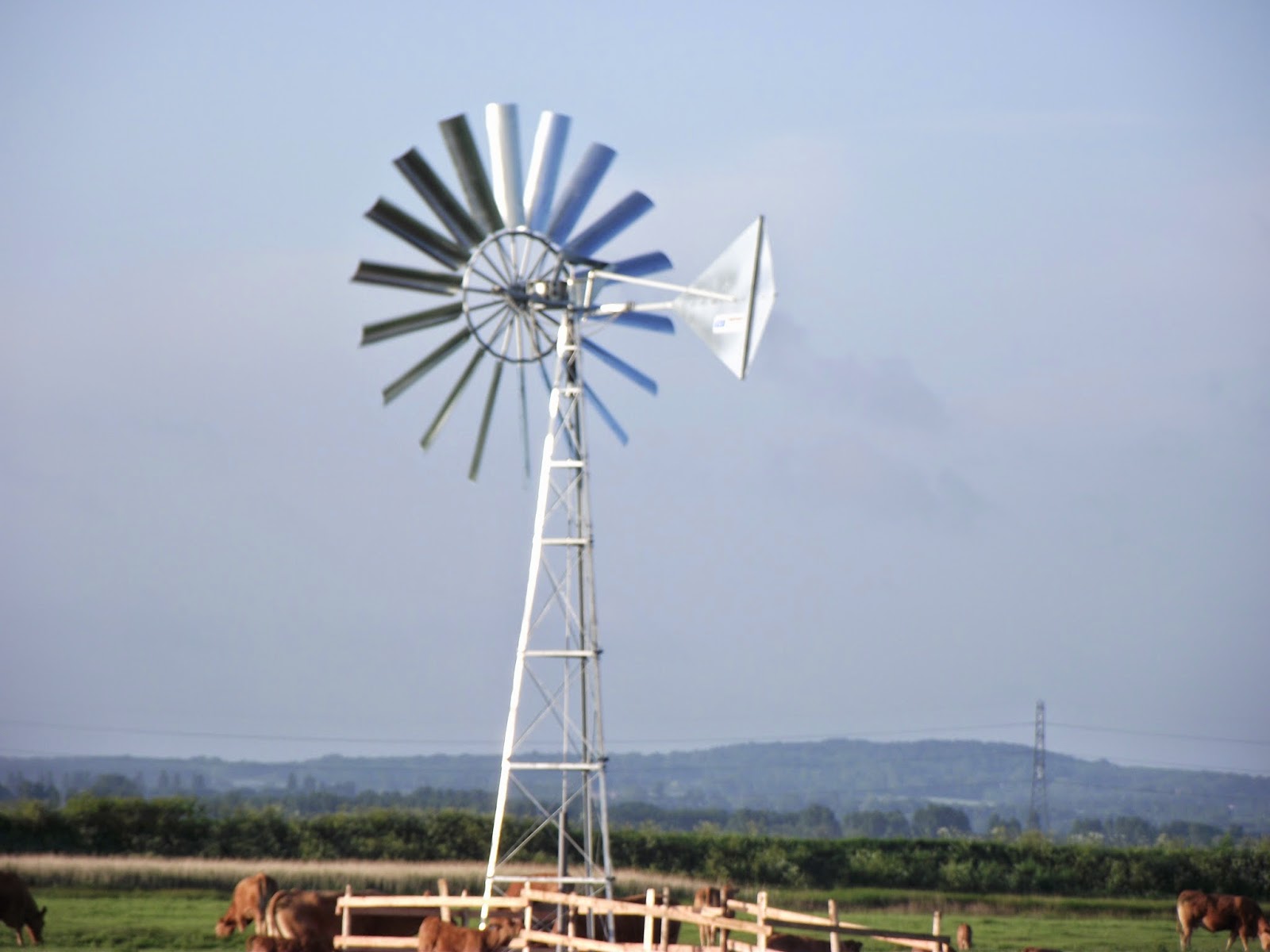 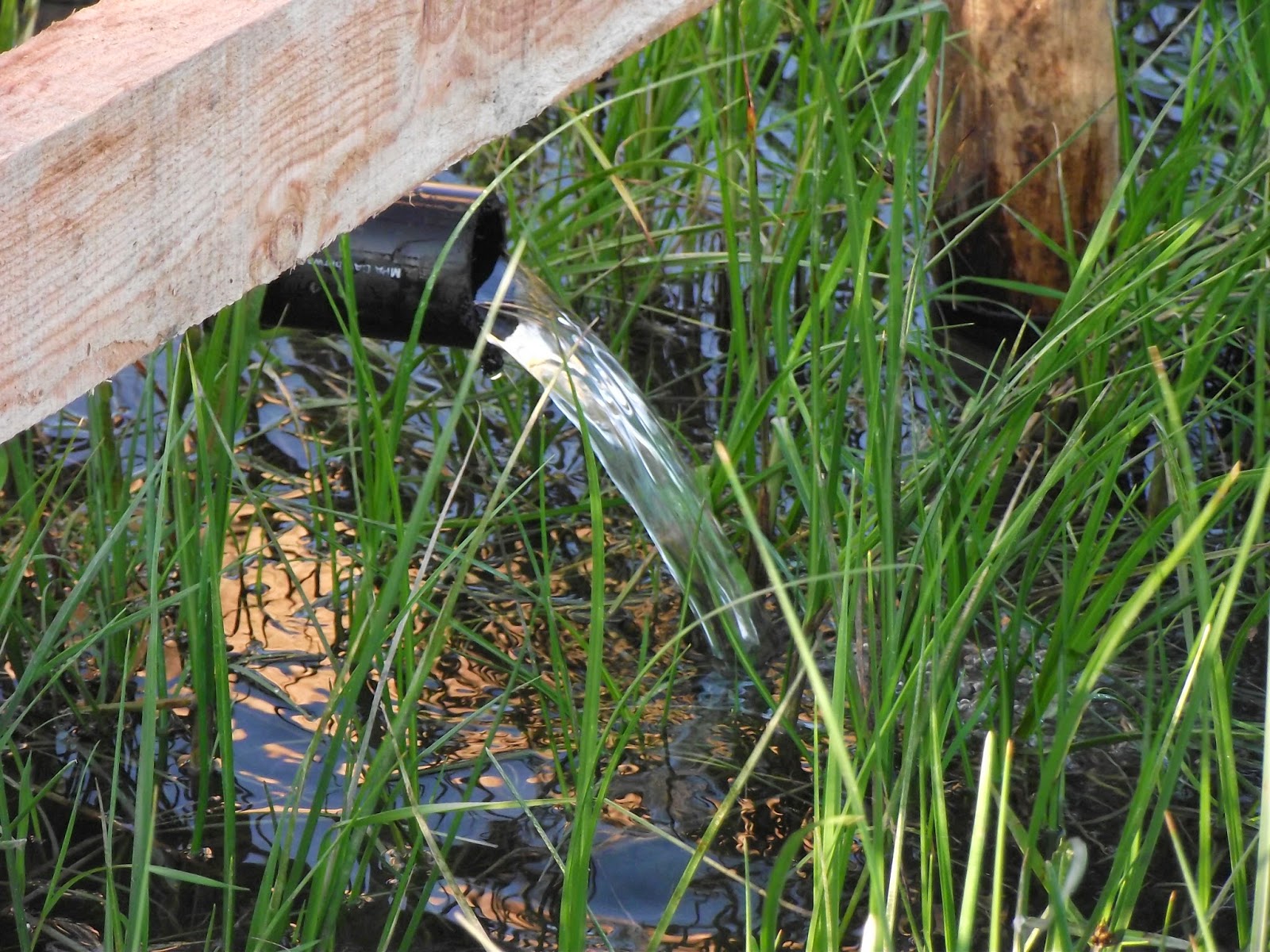 I left the new addition behind and wandered round the reserve in the sunshine and despite the fact that it's difficult to believe that we had the wettest winter on record, most of the ditches are still holding reasonable amounts of water and looking quite picturesque. 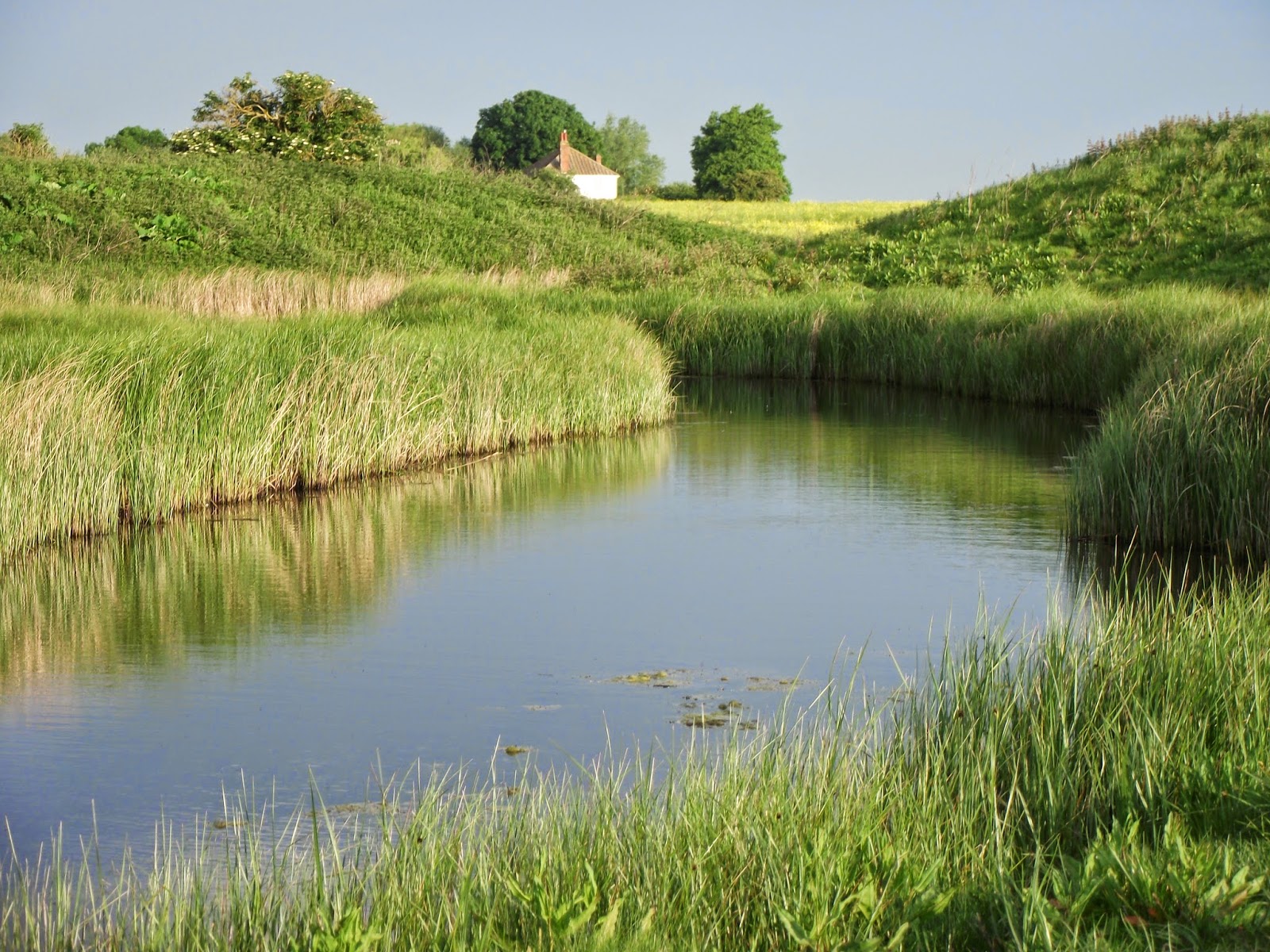 As is this Yellow Water Iris along some of them. 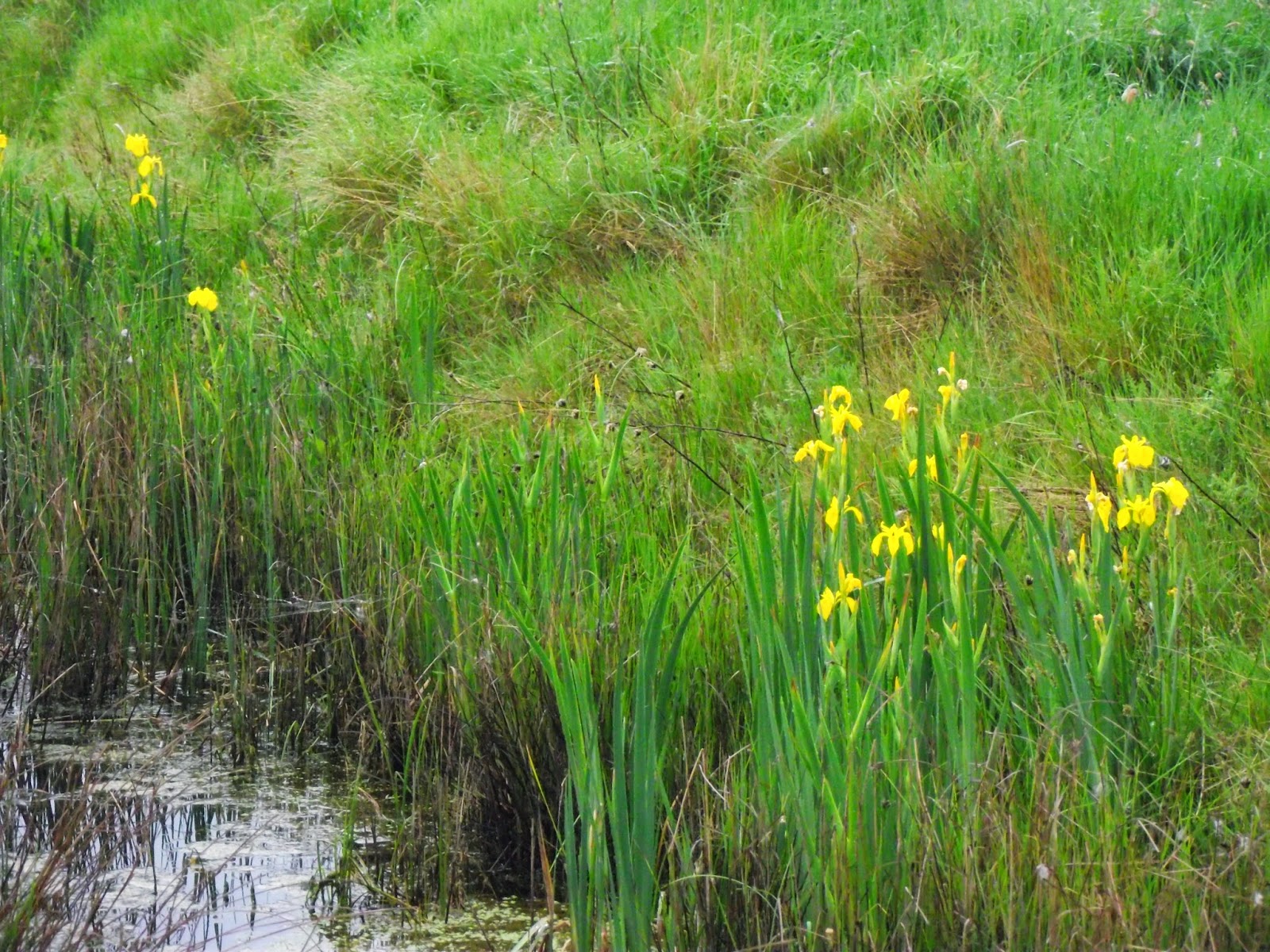 One bird that has returned in high numbers this year is the Reed Warbler and it could be a very good breeding season for them, all of the reed beds such as this one alongside the sea wall, are full of their song at the moment. Bearded Tits and Water Rails are also being heard taking advantage of the excellent habitat on offer. 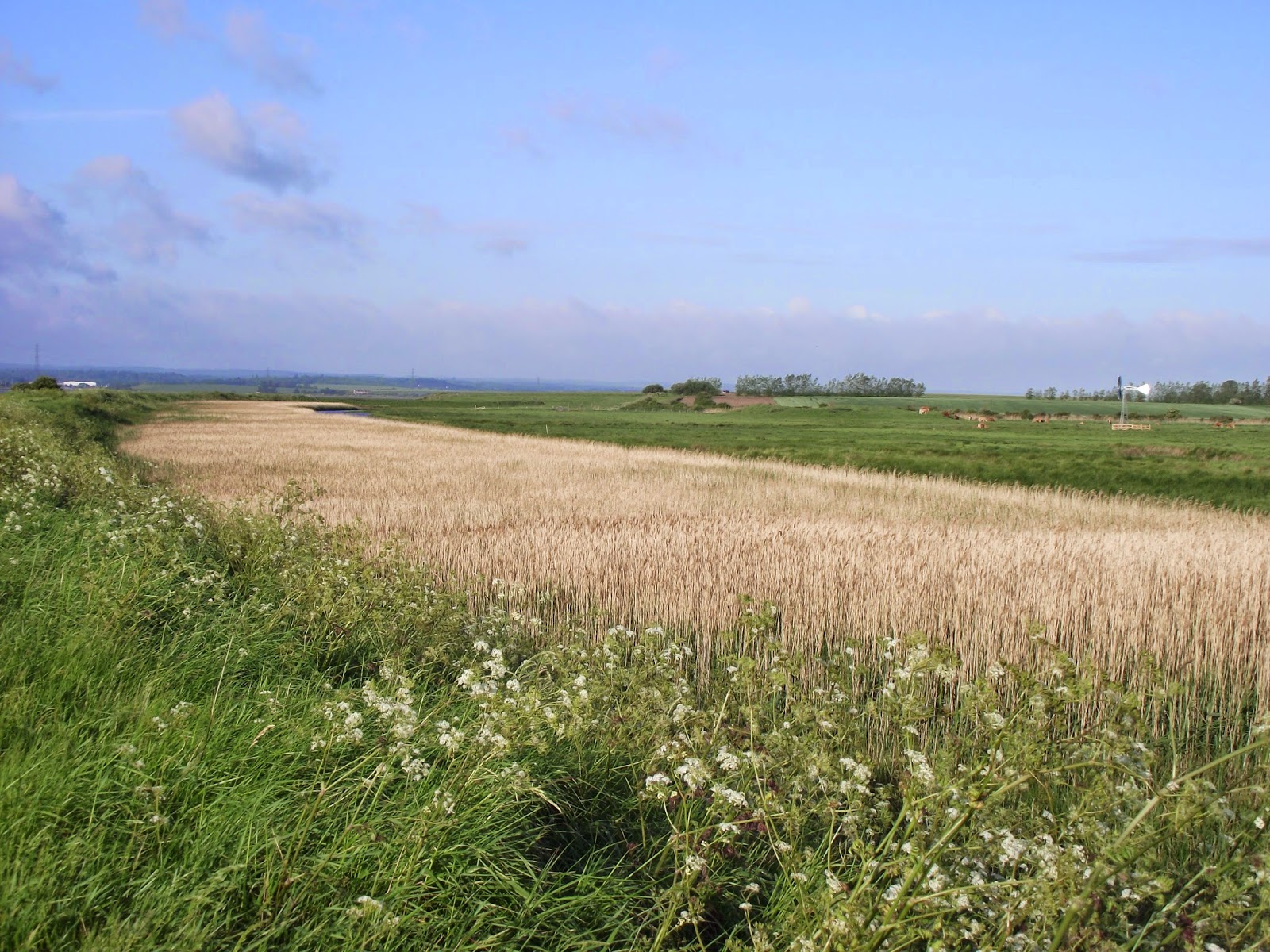 And the reed bed from the opposite side shows the Delph Fleet looking quite splendid in the early morning sunshine. 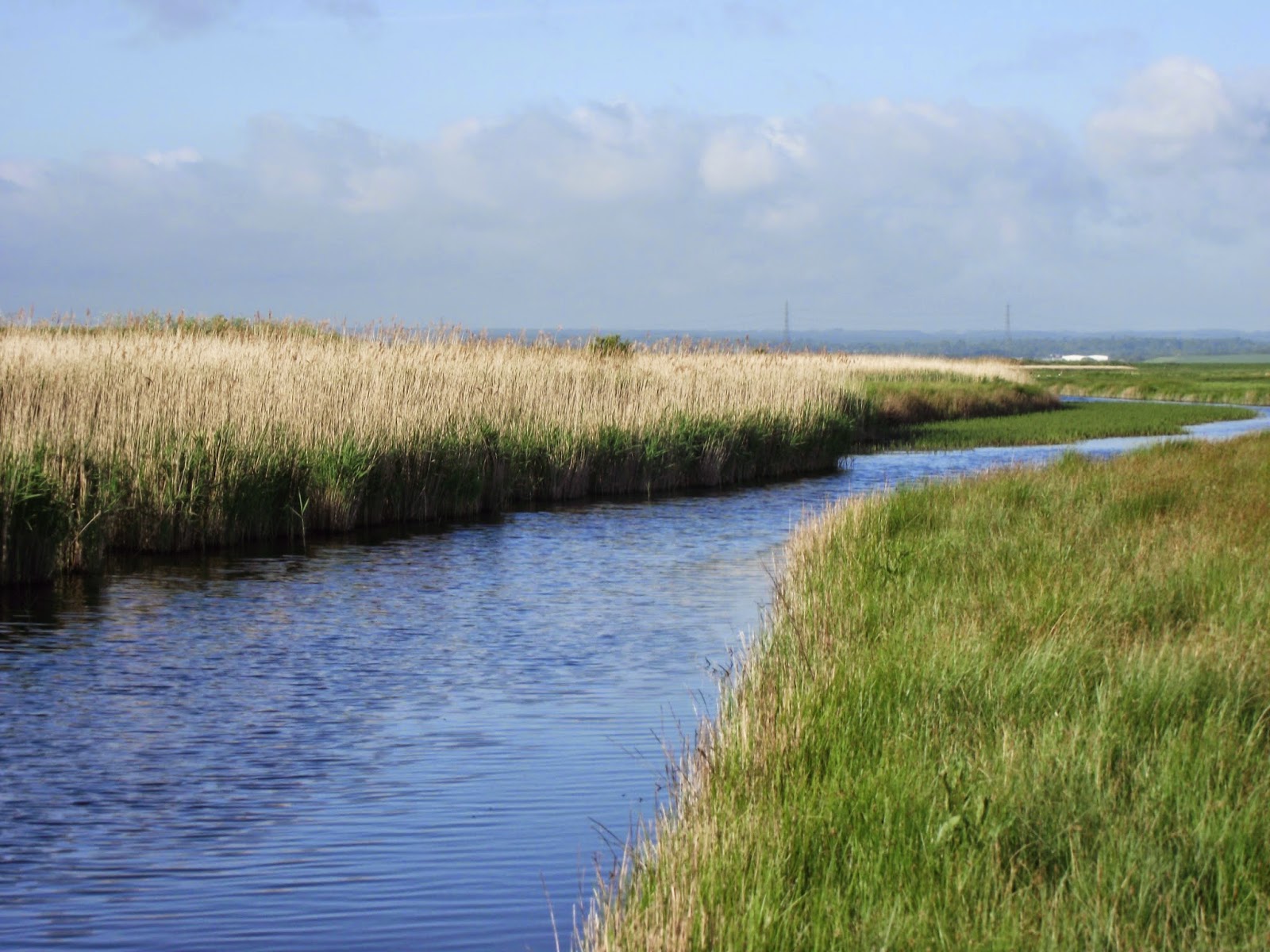 Apart from the Lapwings, which are not doing too well for no obvious reason, most of the regular breeding species seem to be having a pretty good breeding season so far, as this collection of well grown Greylag Geese and parents show. There have been several broods seen this year but so far, none from the three pairs of Canada Geese on the reserve. Broods of Gadwall, Shoveler and Mallard have also been seen and with a Garganey drake seen a few times during the last fortnight in the same place, there is hope that it has a duck sitting on eggs close by.
Avocets also appear to be repeating their successful breeding season of last year and several of the c. 24 nesting pairs now have young chicks running with them. They have been sharing the breeding site with several pairs of nesting Black-headed Gulls and hopefully their eggs and chicks are not providing the gulls with a larder alongside. 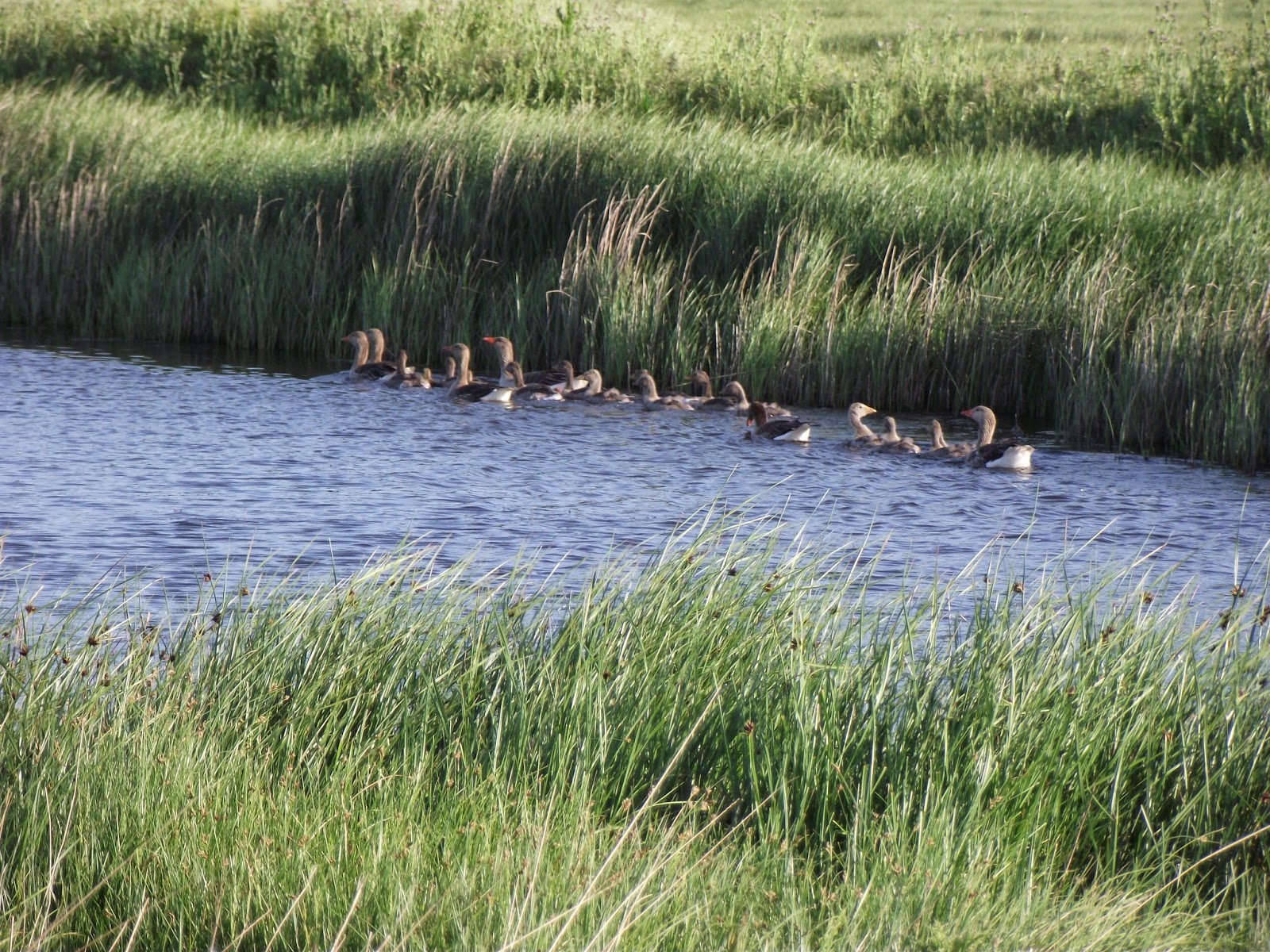 This week as well, three bulls were put on the reserve, one to each of the three small herds of cows and their calves. This fine fellow below has 22 cows to share his affections with and has already got his summer of love off to a fine start. 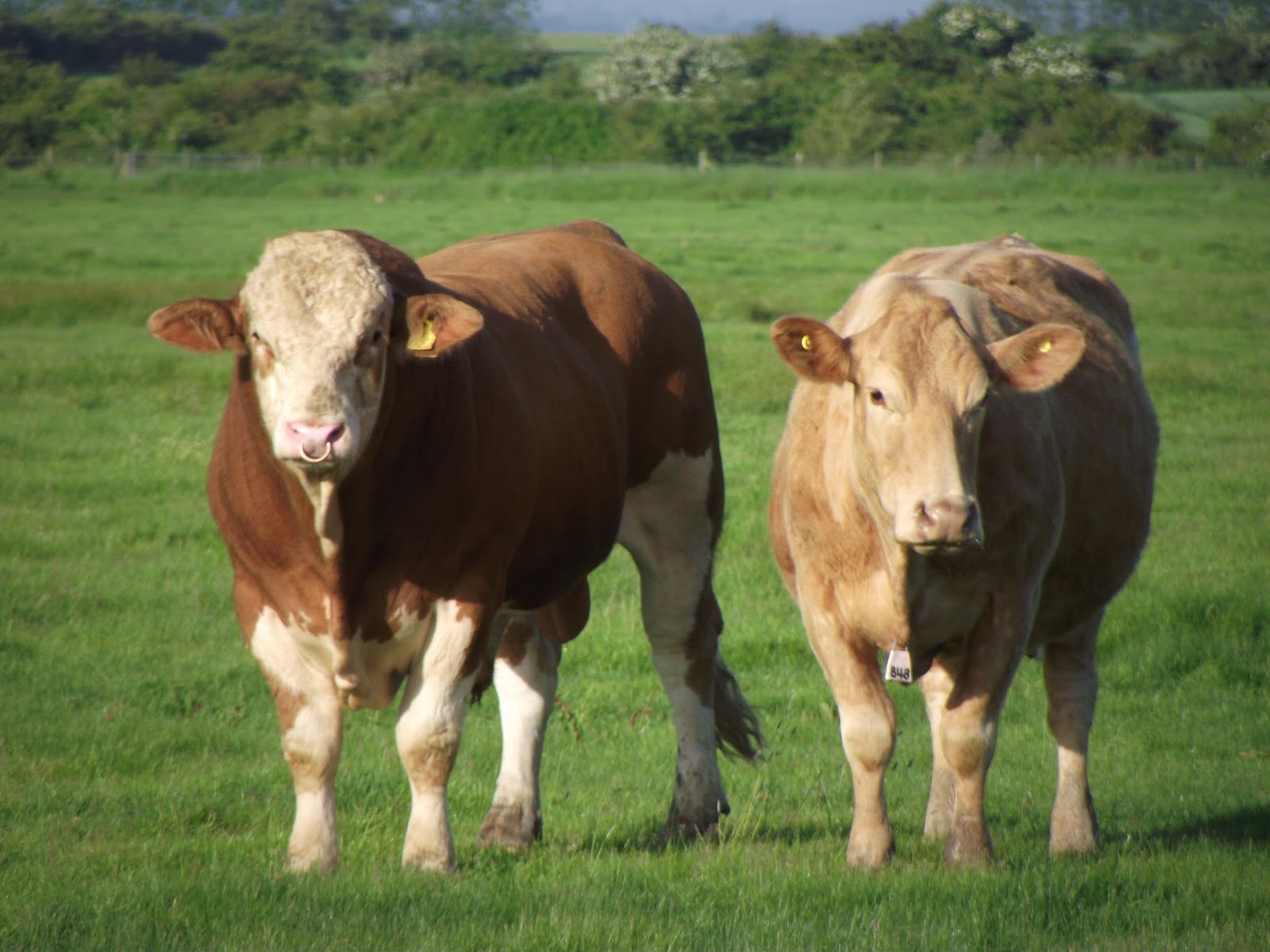 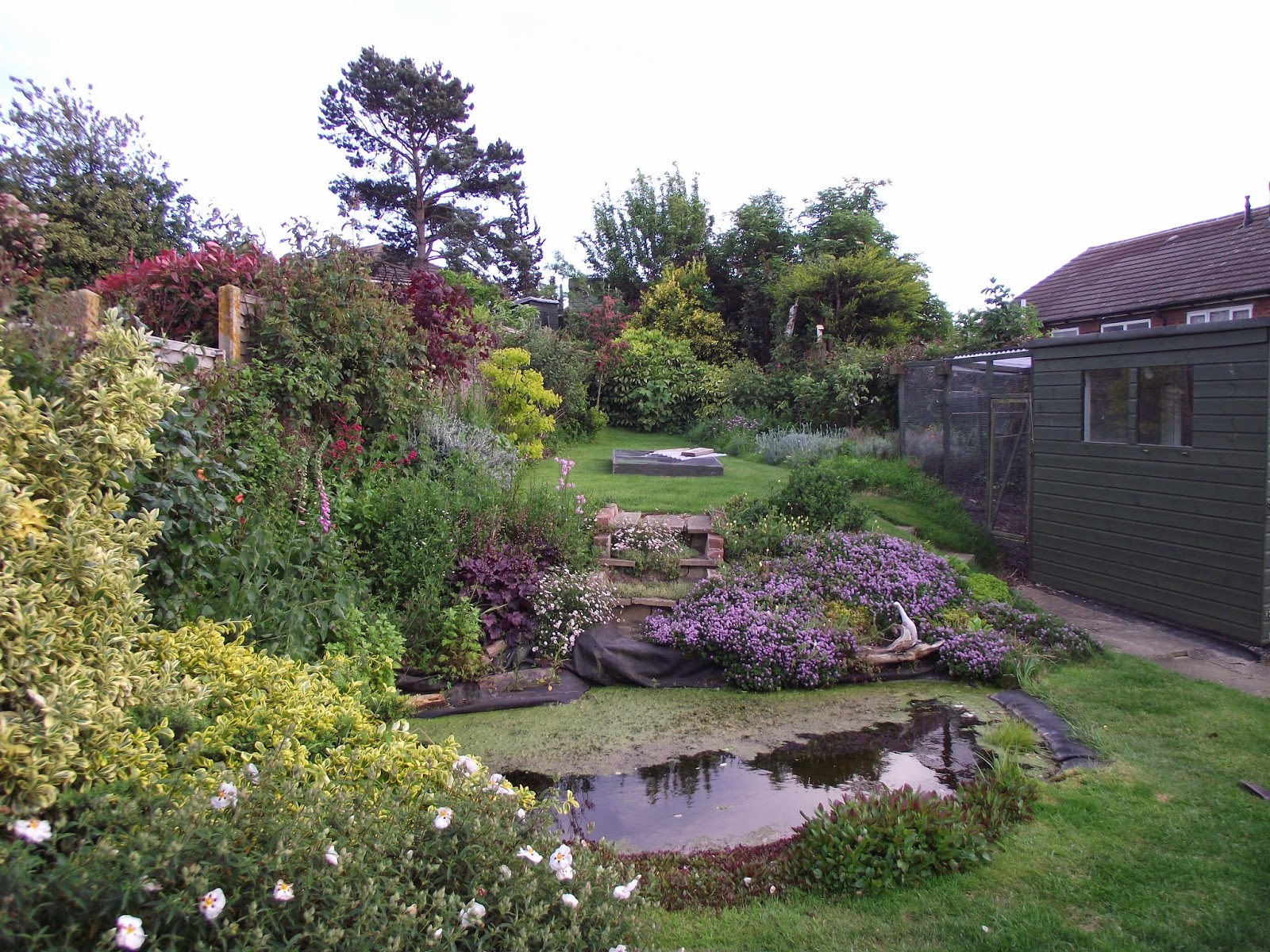 My little rear garden above, is doing really well this year for breeding birds. In the variegated shrub in the foreground left a pair of Blackbirds nested but lost their eggs, probably to a Magpie that has been prowling about, but might not be much longer. At the top end of the garden I currently have a pair of Great Tits and a pair of Blue Tits both feeding chicks in two boxes just a couple of feet apart. The Blue Tits are in the concrete nest box seen below. Hidden behind the old tree trunk and below the green nest box that you can see, are the Great Tits. 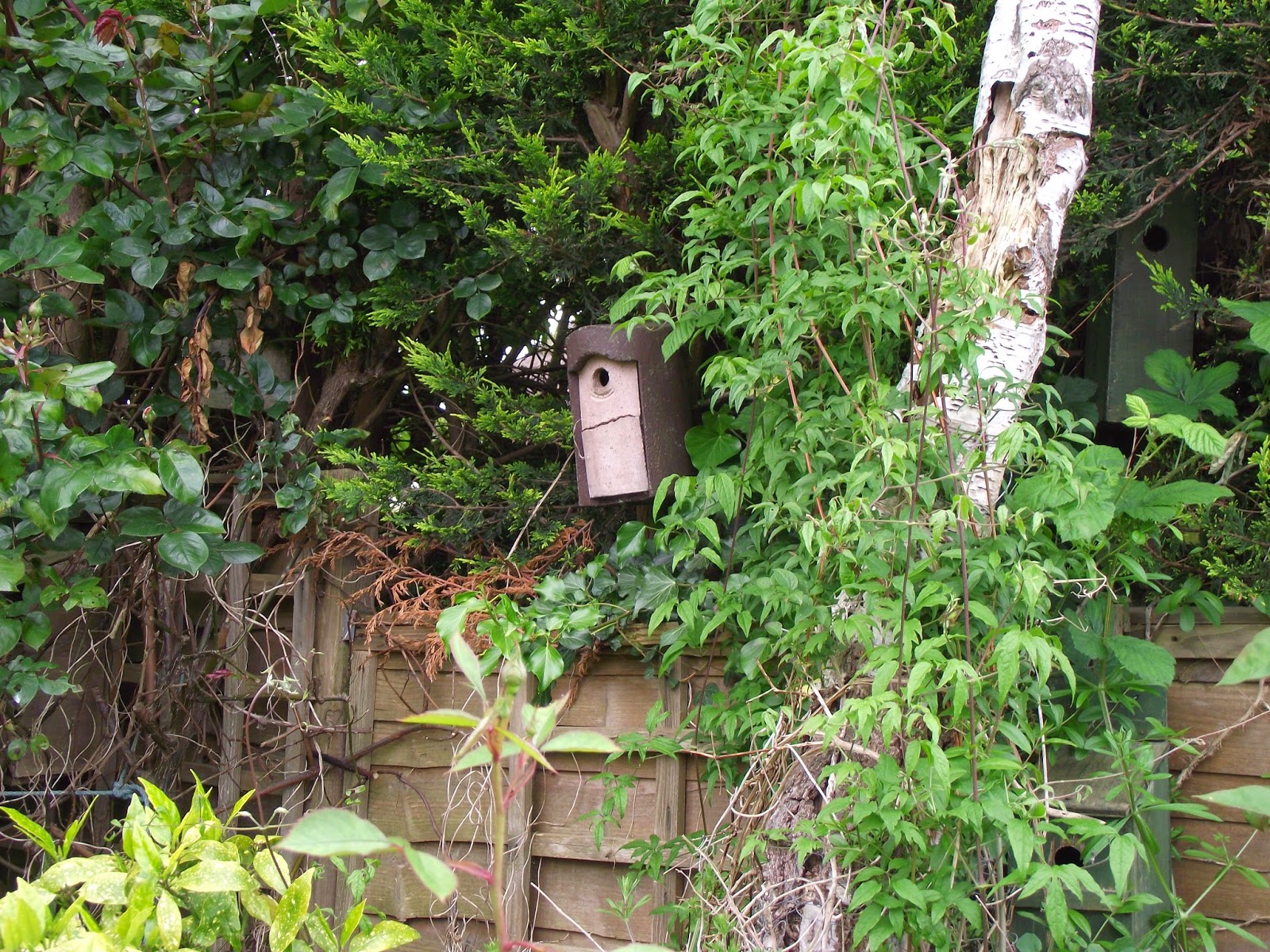 Here's the Great Tit's home with some very noisy chicks in it. 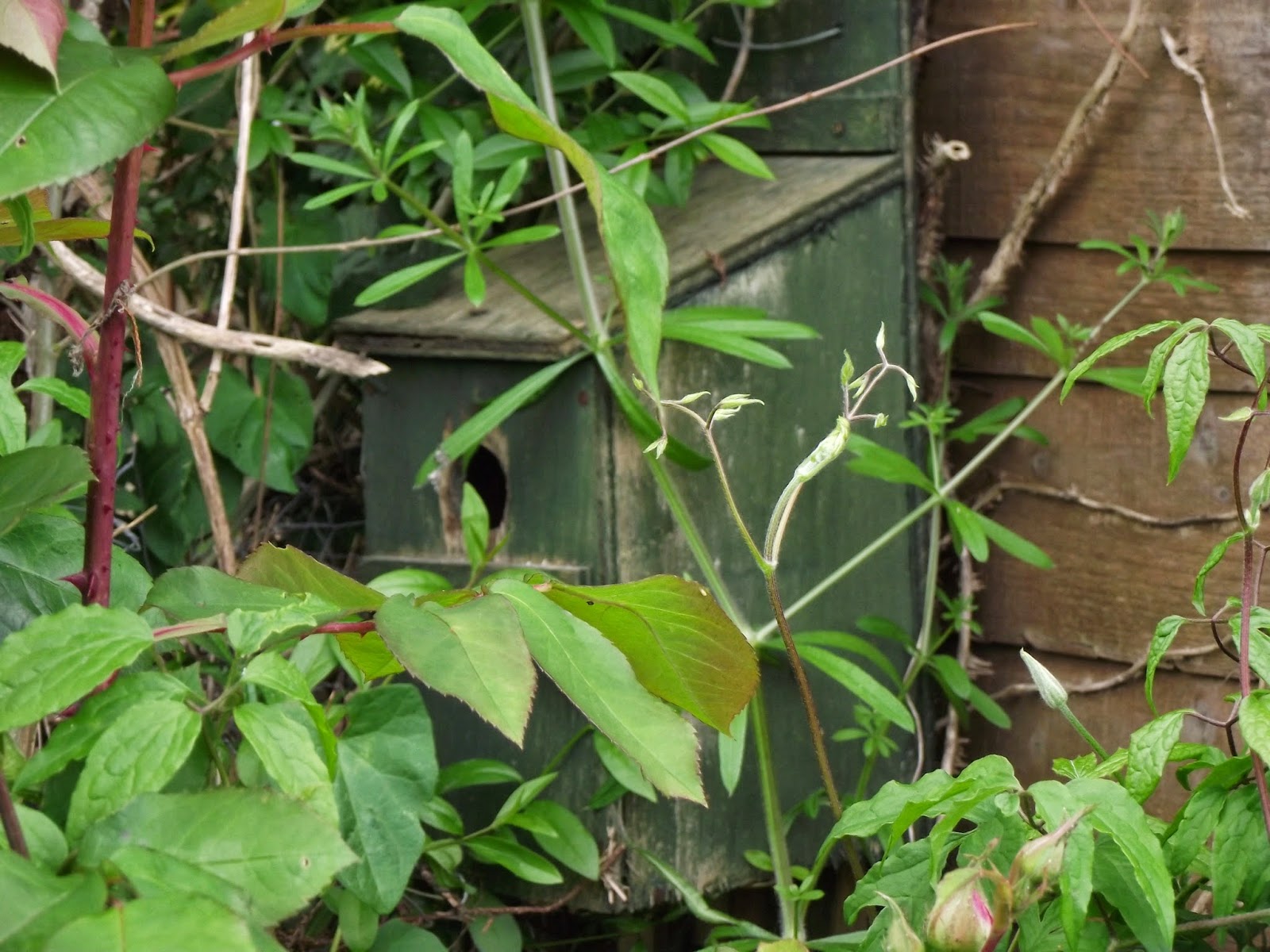 All that going on at this end of the garden. 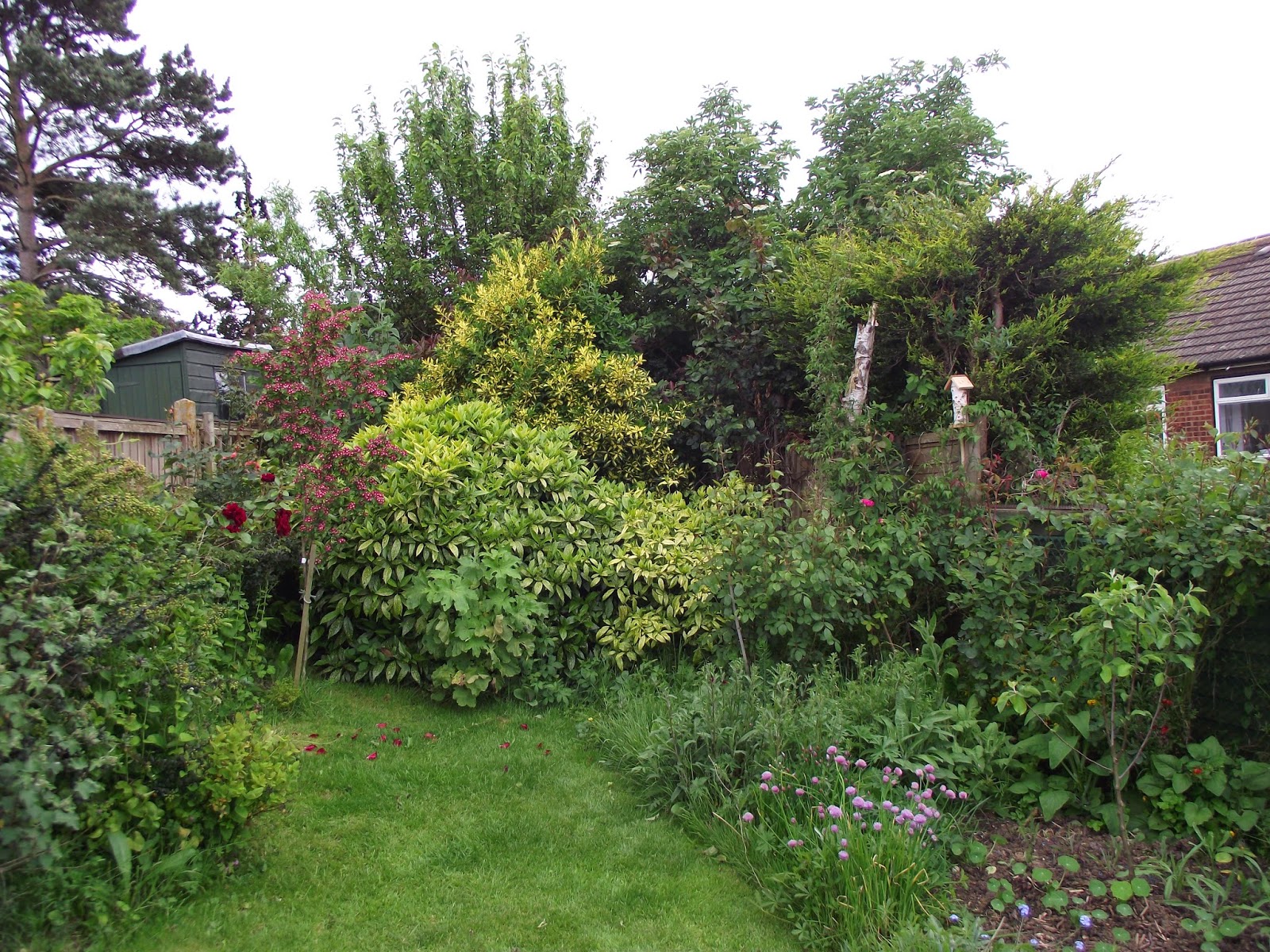 This hawthorn hedge has also come up trumps. Behind the gate a pair of Robins nested in it in an old teapot that I had put there for that purpose and fledged their young. This is the second time I've had Robins nest in an old china tea pot, it works really well. At the near end of the hedge a pair of House Sparrows are currently nesting, hence the hedge's still un-trimmed state, but it makes for a short hop to the bird tables for food. And to complete the success story another pair of House Sparrows are nesting on the house wall in a Sparrow terrace nest box with three compartments. This box is used most years but only ever by one pair at a time, I've never had multiple nesting as is supposed to happen. 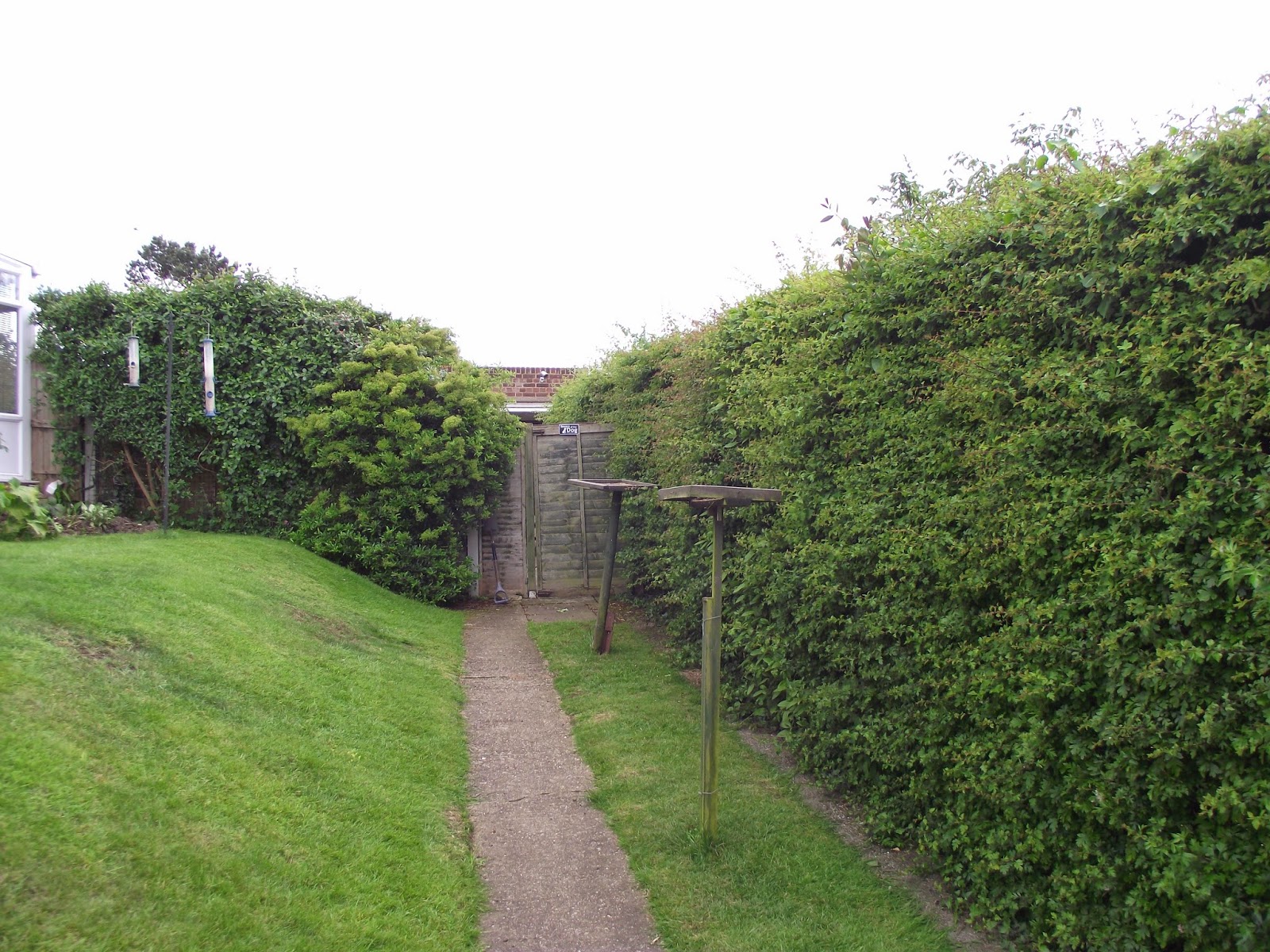 The insects are also provided for and one of the current food suppliers for bees at the moment is this Borage. It's a self-seeded plant from last year's plants and the bees love it. 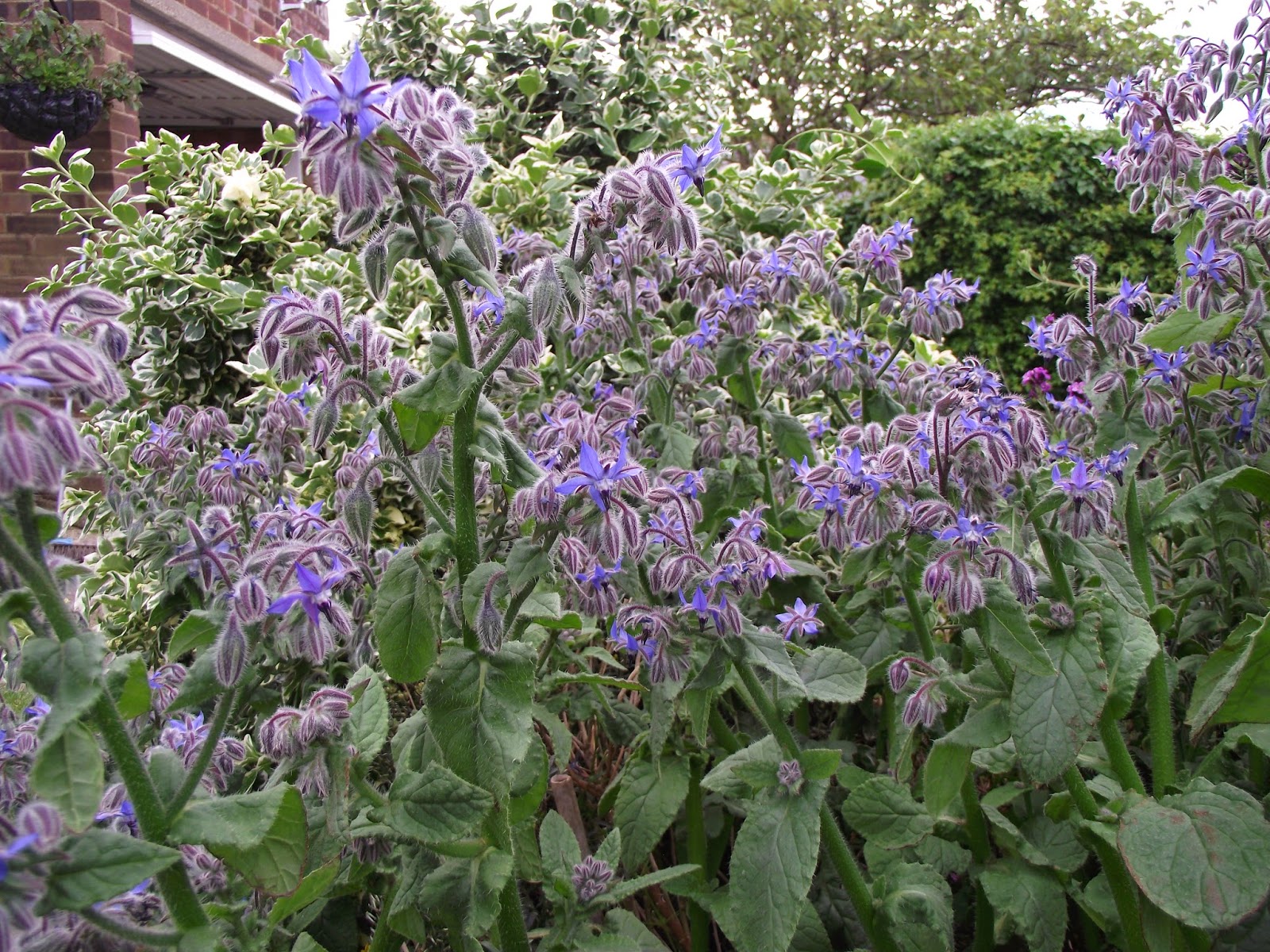 As they do this Creeping Thyme, that in the first photo you can see spreading it's way across the bank behind the pond. Many other types of flowers are also currently growing and they will continue to attract bees and butterflies until well into the autumn. 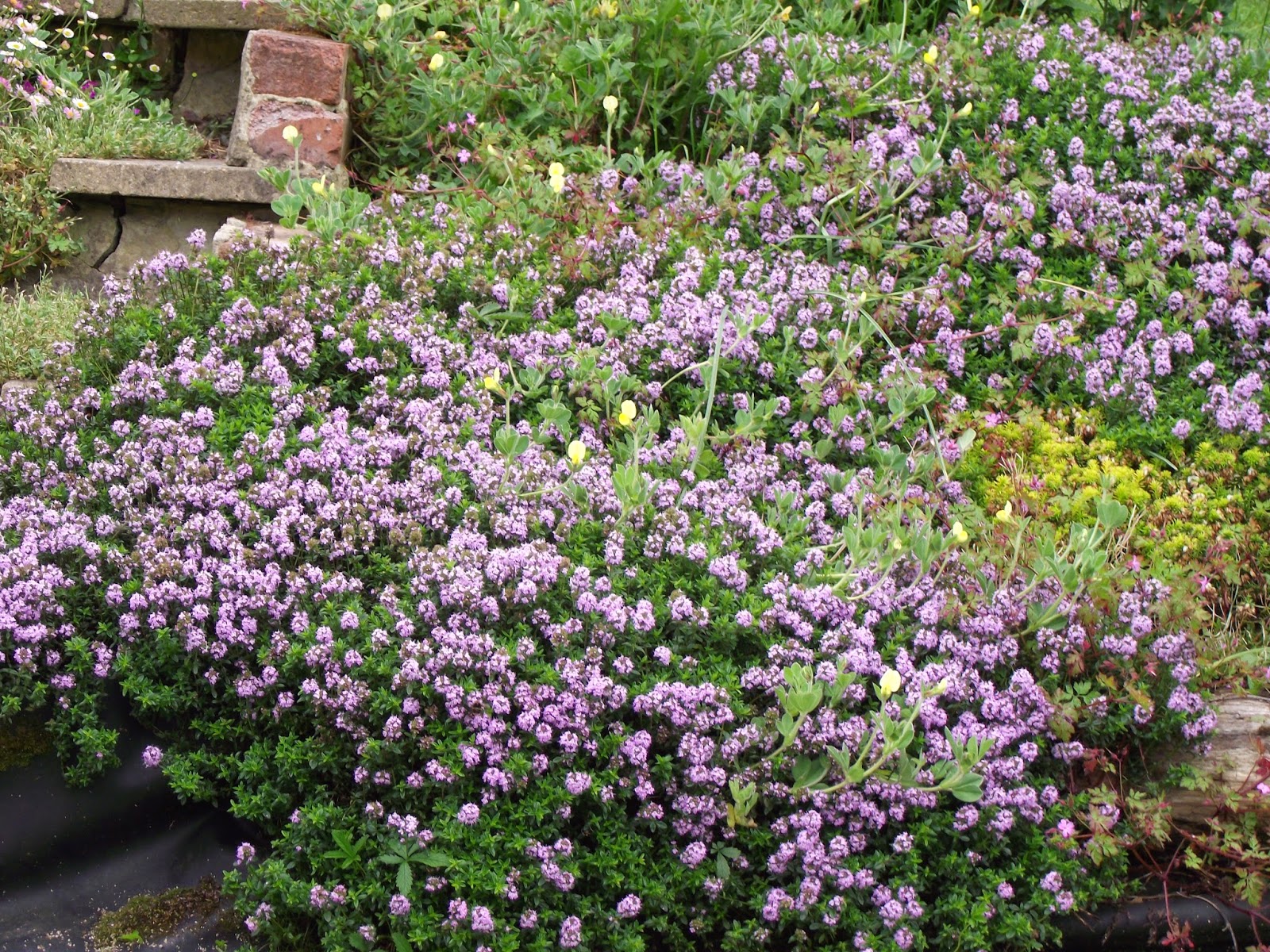