Walking across a part-flooded reserve early this morning was hard work. Negotiating the flooded parts wasn't too bad, it was the gale force wind and bouts of horizontal drizzle that made it worse. Plus it means that I have to wear wellies and I never find them comfortable at the best of times. Large areas of foot deep water are not exactly the kind of conditions that I imagine Ellie, my little Jack Russell, finds enjoyable either, but she gamely runs or swims her way through it all.

I haven't been across to the sea wall for several days, simply in order to avoid having to cross the wet marsh, but today was the last day of the current wildfowling season. The wildfowlers put their guns away until September 1st, when it all starts again. As the reserve's Voluntary Warden and the only person the wildfowlers are likely to encounter from it's management, I always like to keep on friendly terms with them and have an end of season chat. Standing on the sea wall being buffeted by the wind and rain, it was surprising just how many wildfowl have returned, now, over the last couple of weeks, that we finally have the wet conditions that they so love.
It was an irony not lost on the wildfowlers as we chatted - all those wildfowl now that the shooting season has ended - a sod's law sort of event, which is not unusual in their pursuit. This morning, between the four of them, they had shot just the one duck, which was a pretty poor return for standing in deep, tidal mud and the wind and rain for several hours. We stood there comparing notes on how the two different types of season have gone for us all and it seemed a very long time ago since they sat out there with their guns on very warm and sunny September evenings, being bitten to death by mosquitoes.
But now they have finished for six months and apart from the odd birdwatcher or walker, I will have the place to myself again. Time to dream about sitting on the same sea wall on hot, sunny mornings, watching Ellie trying to catch voles in the long grass and being lulled into a lazy frame of mind by the drone of bees and the silent passage of butterflies - ah my kind of season.
Posted by Derek Faulkner at 15:15 15 comments:

Well, almost a month has gone by since my last post and that post's title could just as easily apply to this one. There are a few subtle differences, the water levels have continued to increase in both depth and area and at last, duck numbers are also beginning to increase. Mallard, Teal, Pintail, Gadwall and Shoveler are all beginning to re-appear and combined with large numbers of Greylag, White-fronted and Brent Geese, it's all starting to look how it should do at this time of the year. 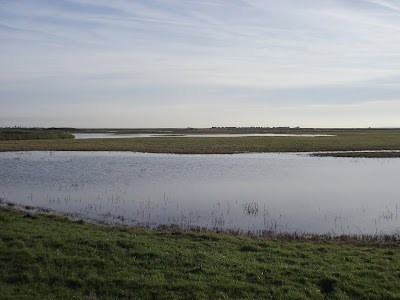 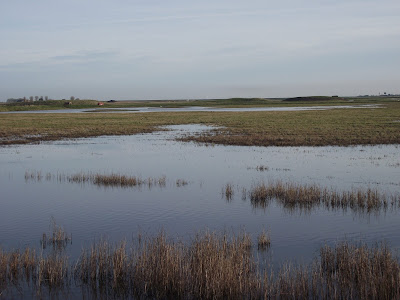 The photo below indicates the kind of access problems that we are now experiencing as a result of the rising water levels. The main track through the reserve runs through this gate and turns towards where I was standing on a raised bund. The ditch either side of the gate and track has flooded across them both and this is being repeated in many places around the reserve. It means that access/viewing, is pretty much limited to the boundary route at the rear of the reserve and the sea wall that you can see in the background distance. They say that you should be careful what you wish for and after four years of asking for decent rainfall to alleviate the reserve's dryness, we've now got a tad too much. 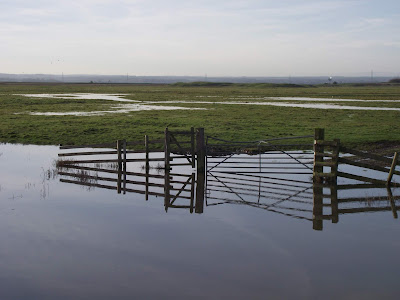 The other notable feature of this February so far, is the lack of any mild and sunny days, it been mostly cold, wet and windy, especially so during the two major storms, Ciara and now Dennis which we are enduring as I write this. Dennis is forecast to possibly dump a month's worth of rain today, so even wetter conditions will exist by tomorrow.
I have found it all so very depressing and cannot wait for us to climb out of this dark dampness and to feel a warm sun on my face.
Posted by Derek Faulkner at 12:09 16 comments: