It was the last of this winter's six, monthly, WEBS counts last Monday and yesterday evening also saw the last of the six, monthly, Harrier Roost Counts around parts of Kent and Essex. There was a chilly and gusty wind blowing under grey skies as I made my way across to the reserve sea wall at 17.15 to await dusk and hopefully, some Hen Harriers. As I have said before, only Hen Harriers roost on the reserve, on the saltings towards Shellness Hamlet, the Marsh Harriers go elsewhere on Harty. Normally I would position myself by the Sea Wall Hide and watch the traditional roost site from there using my telescope. Last night, I chose to walk further round the sea wall and closer to the roost site and bunkered down at the base of the wall out of the wind. Being almost as low as the tops of the salting gave me a much better view, especially as the harriers tend to come in skimming the vegetation and can sometimes be missed if looking down on them.
It was quite pleasant tucked down there and while Ellie amused herself looking for mice or voles in the grass, I enjoyed watching the to and fro-ing of various birds. Small parties of chuckling Shelducks passed overhead, leaving the marsh and heading for the tidal Swale and a female Marsh Harrier tracked it's way slowly along the distant saltings edge, raising my hopes of a Hen Harrier. A little later the Marsh Harrier crossed over the sea wall and headed across the reserve to it's favoured roost site, the light was decreasing fast now. Finally, as the light decreased even further, two adult ringtail (female) Hen Harriers suddenly appeared to my right, I almost missed them. I no sooner saw them than they dropped like stones into the saltings vegetation, not alongside each other but several yards apart. The reason I almost missed them was due to the fact that they chose to roost this time opposite where I normally stand by the Sea Wall Hide, mocking my decision to go further round and watch their traditional roost.
So that was the last Harrier Roost Count of this season until we start again next October, and it's unlikely that the Hen Harriers will be seen much more as they begin their return to breed on the moors of Northern Britain. 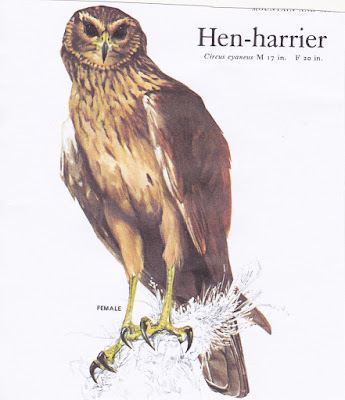 Yesterday, Monday, was the best day of this early Spring so far. It was warm and sunny and the first time that I was able to walk round the reserve without a coat on, I really enjoyed it. Today, under grey skies and with a chilly wind, we're back to square one, it's not particularly pleasant.
Getting back to yesterday, we carried out the last of the Wetland Bird Surveys (WEBS) until next autumn, planned as always, to coincide with the high tide, due on this visit at 13.00. The warm sunshine and a gentle breeze had made the ground seem even dryer and harder as I walked round and I wasn't expecting to record that many wetland birds as a result.
The wind pump does it's best to pump up fresh water from the underground aquifer but in reality it only keeps wet an area inside a 100yd radius around it. 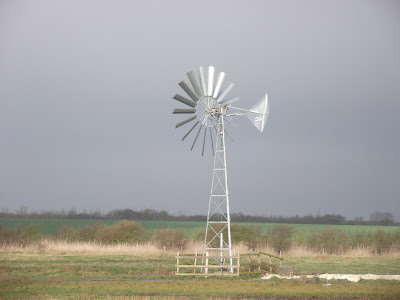 The rest of the reserve remains in rainfall denial, as this old but vital crossing plank demonstrates. The ditch isn't as deep as it looks, only about six inches, normally at this time of the year the water would be level with, or over it. 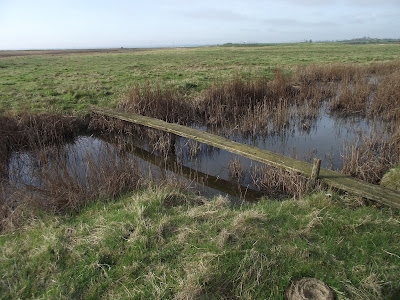 But not to worry, the walk round had Lapwing pairs doing their lovely "peewitting" courtship displays and Skylarks rose up high into the blue sky at regular intervals and sent down waterfalls of song to cascade over us. I only had small counts of the waders and wildfowl that I was there to record but had a good variety of species, including Mallard, Teal, Pochard, Coot, Shoveler, Shelduck, Curlew, Lapwing and Little Grebe. There were 80 of the resident Greylag Geese and best of all, 160 White-fronted Geese (below) still lingered on before returning to their far northern breeding grounds. 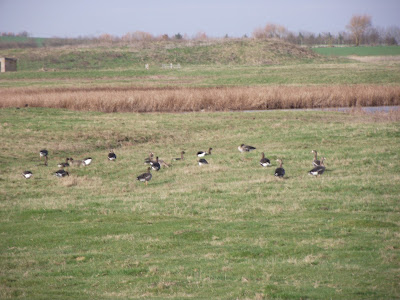 A total of eight Marsh Harriers were active across the reserve, often soaring high into the sky to become small specks, only noticeable by their plaintive call notes that made you look up and search for them. It was a real, small taste of the summer to come and I sat on the sea wall and savoured it and as if to confirm my thoughts, the first butterflies of the year came by, two Small Tortoiseshells and a Peacock, such simple joys.
Ellie meanwhile, bored with such inactivity, had wandered off a short way to inspect some mole hills in the vain hope that one of the little, furry tunnellers might be near the surface and catchable but they rarely are. It was a really uplifting day and a shame that today couldn't of been the same. 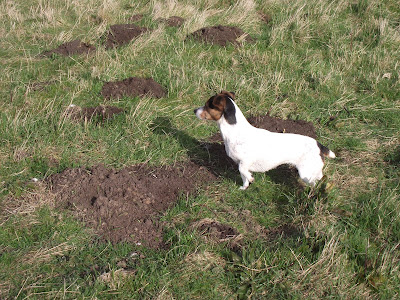