Driving across the marsh road lately, it's difficult to distinguish the reserve fields from the neighbouring farm crops of wheat and barley. The farm crops are resplendent in bright golden colours and are currently being harvested, the harvesters marked out by the great clouds of dust that follow them across the fields. The long grass on the reserve's grazing meadows is also now looking golden and dry, an air of mid-summer quietness covers the reserve, little, 'cept the butterflies, is moving.
The ground is baked hard and a strong, sweet and sickly smell hits you as you arrive - the ditches, low in both water and oxygen, are stagnating and turning funny colours.

Bird life becomes less obvious with every day, the wildfowl are moulting and with the temporary loss of their flight feathers, are skulking close to reed beds out of harms way. Hard to believe that in just four weeks time the wildfowlers will return, intent on shooting them. Sitting on the saltings at either end of a hot September day, being pestered by mosquitoes and feeling too hot, doesn't really fit with the romantic image of stormy, bitter cold winter shooting days but some still do it.
But back to the birds, the reed beds are becoming quieter as the Reed and Sedge Warblers gradually begin to slip away southwards, back to their African winter quarters. This has been most apparent over the last 2-3 weeks as regular numbers of Swifts, Sand Martins and young Swallows, pass across the reserve in the mornings, swirling around me looking for those last fat flies and then, they're gone, southwards is calling! Just 4-5 weeks ago they were eggs in a nest and now as young birds are taking an untravelled and unknown road across continents - a brief moment of feeling regret and  abandonment flits across my mind as I look at a now empty sky.
Some Cuckoos, fitted with satellite transmitters a month or so ago in England, have already reached their winter quarters in Southern Africa, such a fleeting summer visit each year. A friend recently likened them to some humans - they arrive, they breed and then quickly bugger off to leave their children to be brought up by somebody else!
Birds are currently leaving us faster then any newly arrive. Small numbers of waders, fresh from breeding in northern climes, such as Greenshanks, Spotted Redshanks and Green Sandpipers, will briefly drop in to feed along muddy ditch edges and then be gone again. It's what many birdwatchers call the summer doldrums - the dry, boring gap between  mid-summer and mid-autumn, when birdwatching becomes a faintly inspiring past time.

As I promised yesterday, I was on the reserve earlier this morning in order to get a few more photos of mostly meadow flowers.

Meadow Rue - this grows to around 6ft tall 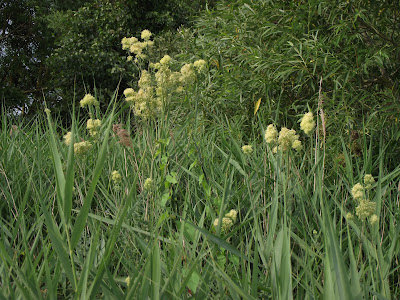 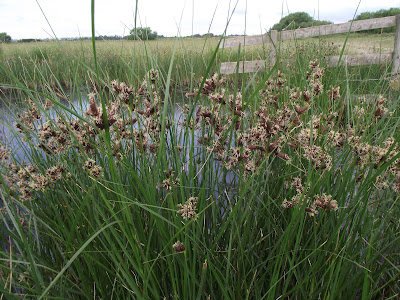 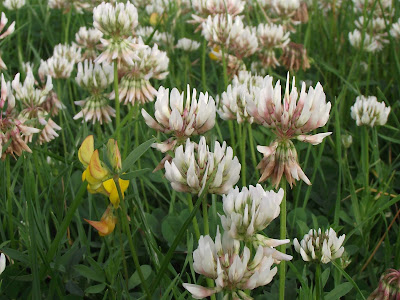 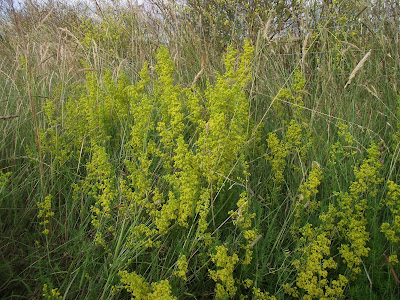 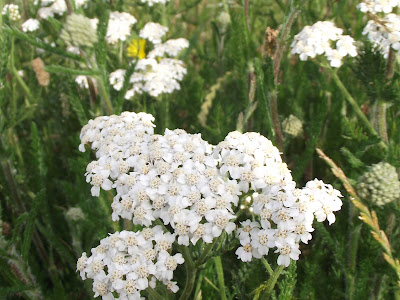 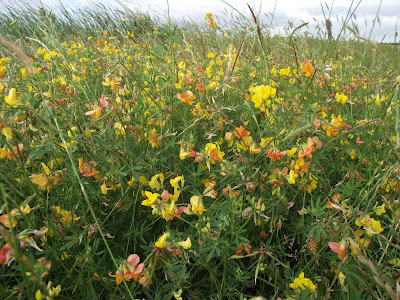 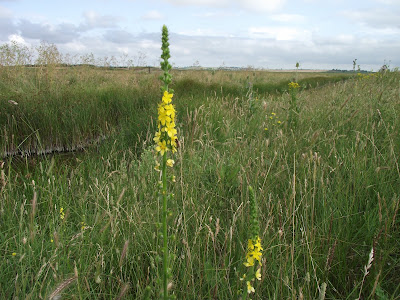 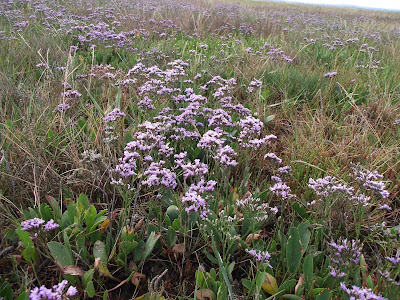 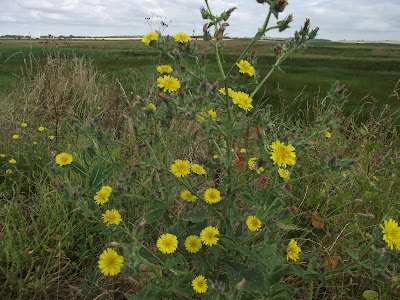 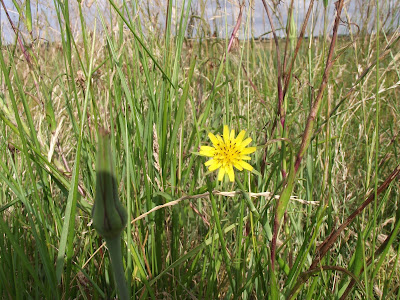 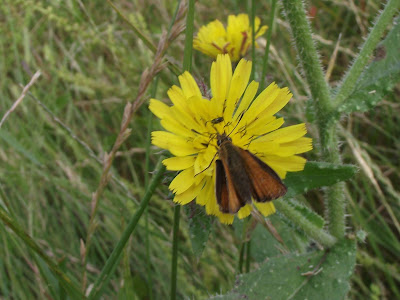 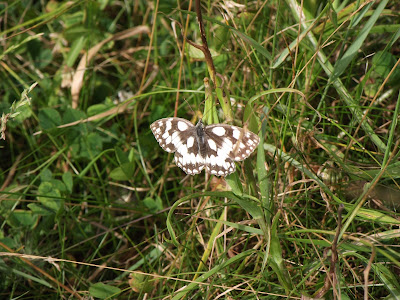 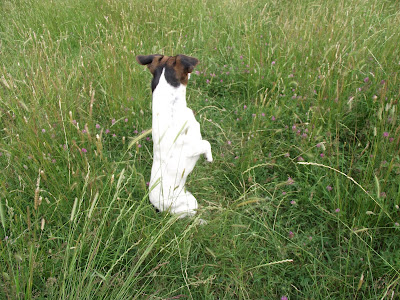 Well as I mentioned in my last post, the small herd of cattle that we have on the reserve this summer, have been fighting a losing battle to reduce the height of the grass and other vegetation. But while that was a problem in the early breeding season because long, wet grass, not only conceals plover chicks from being counted and can keep them wet and cold, at the moment the grazing meadows look quite lovely.
Over the last couple of weeks of very warm and sunny weather, the meadows, with their grass seed heads all swaying gently in the breeze, have been a joy to see. That weather has also brought about a moderate hatch of Meadow Brown butterflies and they form so much a part of the meadow scene as they flutter across the grass tops. In the last couple of days Gatekeeper and Small Skipper butterflies have also begun to join them. Hot and dry conditions on the reserve are now starting to tighten their grip, the dirt tracks are dry and dusty and ditch levels are dropping fast.
This view across one of the grazing meadows shows the uniform, near thigh high grass levels. In mid winter these fields would be short grazed, wet and muddy. 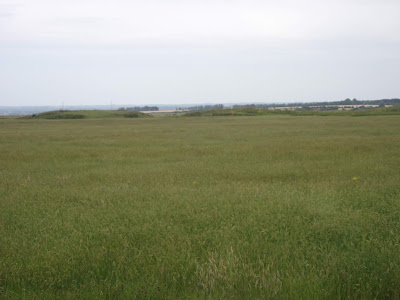 As a result of the reduced grazing it is turning out to be a great year for wild flowers on the reserve, a few are shown below. I will post a larger selection next week. 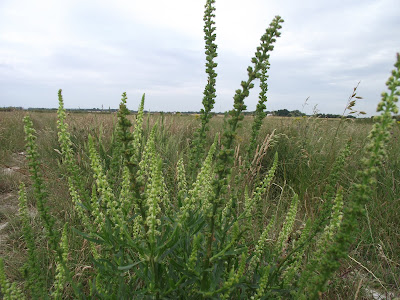 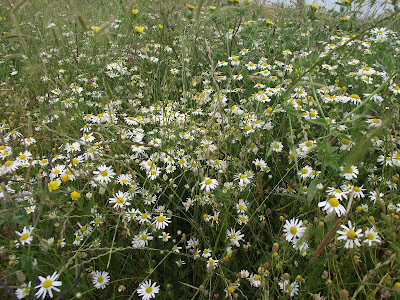 Great Lettuce. It grows to about four foot high and is almost identical to Prickly Lettuce, just missing the prickly stems. 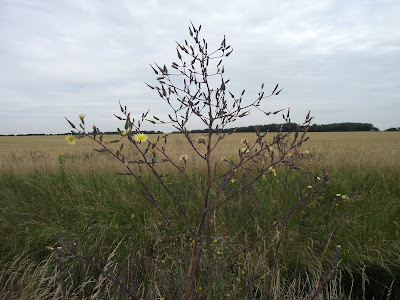 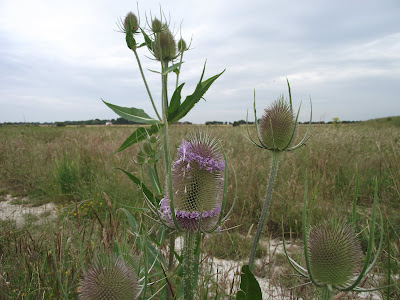 Lesser Reedmace. A small, slimmer seed-head than the normal bullrush. 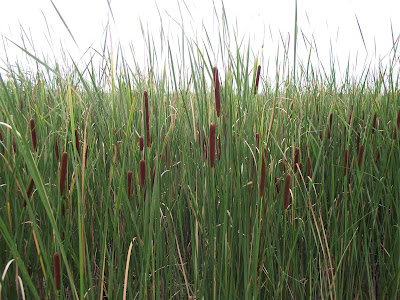 My annual favourite, the appearance of Cinnabar Moth caterpillars feeding on Ragwort. This year has seen the best hatch of the caterpillars for years. 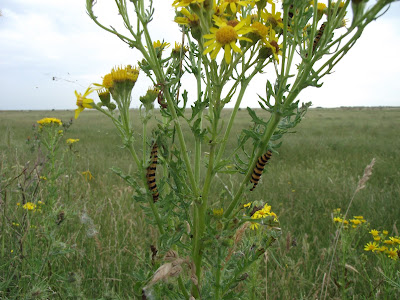 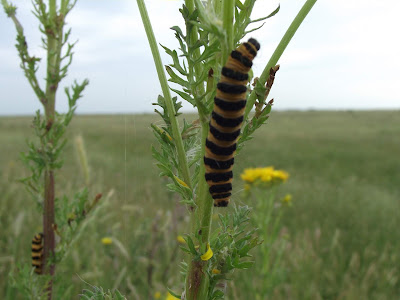