Last Friday, while most of Southern England was experiencing a heavy fall of snow, here on Sheppey we fortunately didn't. Despite the snow falling to within about 15-20 miles of us, we instead had 18 hours of rain, it was like we were in some kind of unique micro-climate.
Over the last few days, what that has meant, is that as the neighbouring farmland has drained towards the reserve, the ditches have filled almost to over-flowing. All the shallow rills across the grazing marsh have re-filled and the scrape in the Flood Field has also filled just as we need it - the reserve is now looking just as it should do at this time of year. 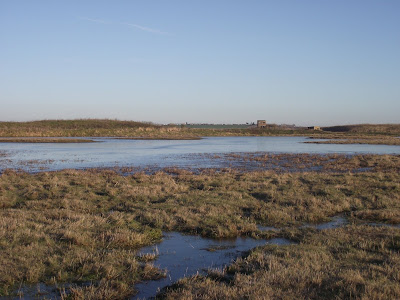 Couple that with the fact that as I walked round it earlier this morning, it was much milder than of late and to be honest, in odd sunny spells, it felt almost Springlike. Tempting fate perhaps but a few Skylarks were singing, odd pairs of geese are separating from the main flocks and after the last few weeks of cold weather it was easy to feel that way.
There have been a few casualties over the cold spell though. Yesterday I found a dead Heron alongside one of the ditches and two juvenile Mute Swans from a brood of six last summer have died. Just this morning I also found literally just the two legs of a predated Redshank, one with a ring on. I took the ring number and rang the local bird ringing group and it turned out that the bird had been ringed on the reserve just two and a half years ago.
Back home, the garden is gradually stirring into life, a few daffodils are in flower, with many more soon to follow and tulips are now an inch or two out of the soil. I've pruned all my roses, manured everything that needs manuring and as I stated in my last post, we're in "limbo land" waiting impatiently for the opportunity to do some proper gardening. In the meantime I'll leave you with some of my snowdrops and aconites, how heart-warming they are. 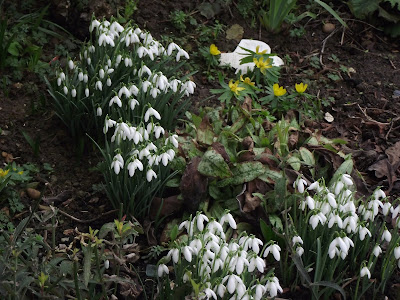