It has been a hot and sunny week and on a couple of days, very hot, and how enjoyable it has been after such a miserable summer so far. How wonderful it has been to be out on the marsh early in the morning while the dew is still on the grass and the sun is only just starting to warm the air. Birds are busy scurrying about, doing what they need to do before the heat of the day sets in and they then disappear to the depths and cool of the undergrowth. Yesterday a lone Cuckoo flew by, no longer issuing it's haunting call notes and no doubt already on it's way back south to Africa for the rest of the year. Some of the grazing meadows, that have not yet received attention from the cattle, are looking as good as I've ever seen them, long lush grass thickened by great carpets of red and white clover in flower and Birds-foot Trefoil. The heat and sunshine has also brought out larger numbers of various butterflies to skip through the grass, while bumblebees feed on the clover flowers, high summer is at last with us.
The hay has all been cut, baled and stacked and the rape crop harvested to leave great, dry fields of bare stalks. Very soon now the wheat and spring barley will also be harvested and it is looking very golden in the early morning light. 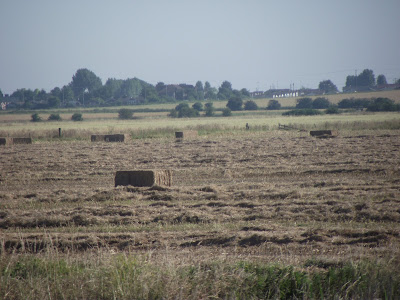 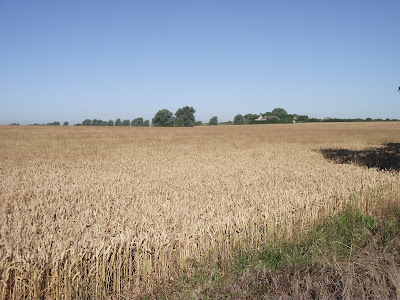 One of our two neighbouring farmers in recent years has taken to sowing wide strips of wildlife friendly flowers alongside some of his crops. Last year it was the tall and strikingly blue chicory flowers that attracted bees and butterflies from far and wide and whose fallen seeds fed a large flock of Linnets all winter. This summer it is a purple flower that I cannot identify but which is proving just as irresistible to bees. The flowers have a scabious look about them but rather than the pop-pom effect of scabious flowers, these have a curved effect to the segments. 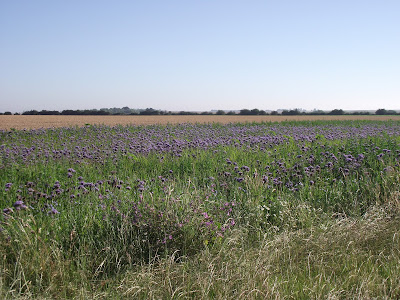 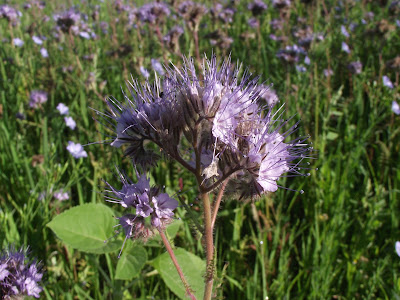 The early part of today was pleasantly warm and sunny on the reserve with no cloud or wind, lovely jubbly as the man said. I'll continue with another selection of odds and sods as I walked round.
Looking across the grazing marsh from the Tower Hide, I watched this Thames sailing barge making it's way down The Swale and out to sea. 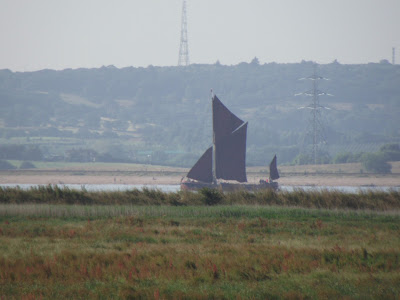 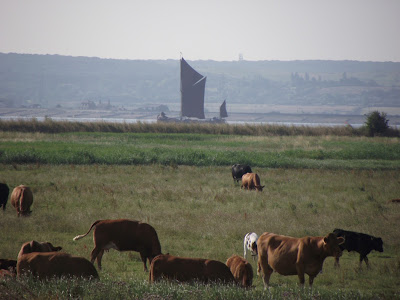 This Mute Swan family have done well to survive with five cygnets. 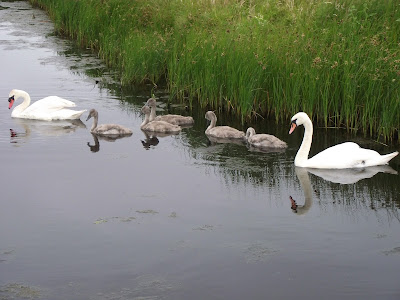 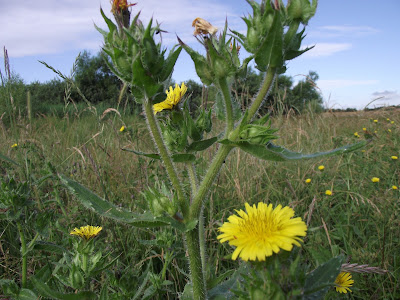 This flower, Gipsywort, grows to around two feet in thick clumps along the reserve ditches and yet it has tiny little white flowers. 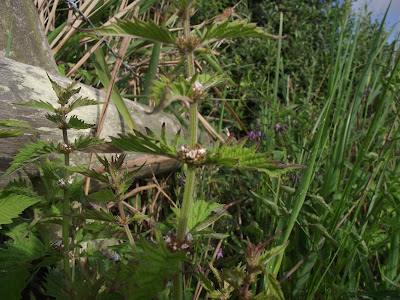 White Clover covers much of the grazing marsh and yet most days we don't give it a second glance, but just look at the lovely formation of the flower if we get up close. 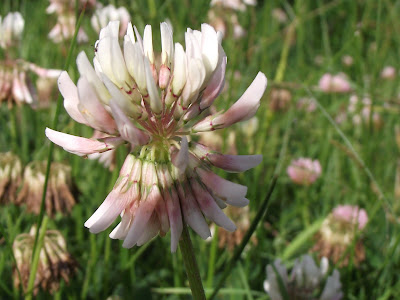 and here, is the post-flower fruit pod of the Strawberry Clover. 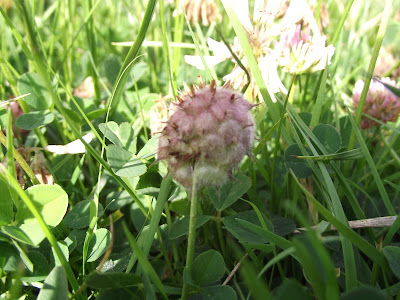 This one's easy, it's Teasel. 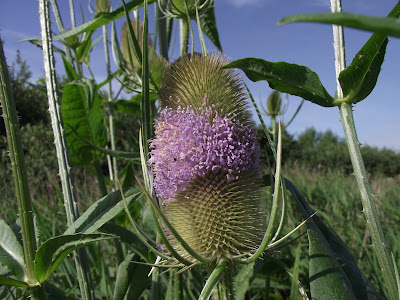 This year, butterflies are about in much smaller numbers, this is a Small Skipper. 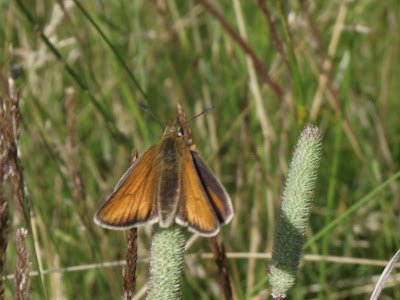 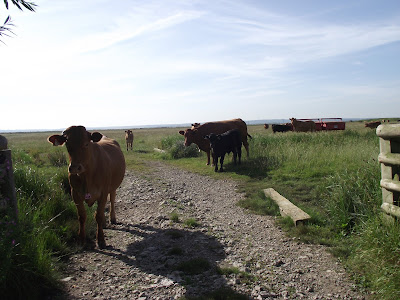 With the walk over Midge and Ellie waited in the car for me to stop taking photos. 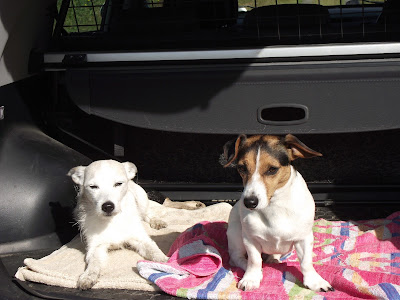 So far here in North Kent, we've had over a week of dry weather and no rain. Some days have seen almost hot sunshine, some cloudy but humid weather and for most days there has been a strong and drying wind. Consequently, local landowners have at last, begun and successfully completed, hay-making. They have now begun harvesting the rape fields and this too is going very well and so all of a sudden, the weather related doom and gloom has gone and things are catching up. This is also apparent in the other arable fields of wheat and barley, the wet and warm weather has filled the ears with plump grains and yields look like they should be fairly high. The only downside of that is the high Black Grass content through the grain fields. Despite all their best efforts, farmers seem to be facing an uphill battle against this weed. It appears to have become resistant to spraying and so deep ploughing in the autumn has been the most recent suggestion. This has the effect of burying the seeds deep enough to stop them germinating and also has the beneficial effect of opening up compacted soil to improve drainage. Unfortunately fields here on Sheppey that were deep ploughed a couple of years ago, still have a 40% infestation of Black Grass this year, I guess there's little you can do if the seed is in the wheat seed that you buy in and sow.
I had a Hedgehog in my back garden early yesterday morning, which, given the slug infested and overgrown nature of it, makes for pretty ideal habitat for the creatures and I'd love to have them reside there. Unfortunately, owning two terriers, I've had to do my best to keep them out which is a real shame and I miss having them here and feel guilty at not helping an animal that is in dire straight these days.

I read an enormous amount of books each year, still in the old-fashioned, non-kindle way. I favour autobiographies and biographies, especially those about privileged people from the 1930's and 40's and especially members of the Bloomsbury Set. Currently I'm reading a new one by the Countryside farmer Adam Henson about his life to date and prior to that an 820 page book on Paul MCartney and another about the artist Sir Alfred Munnings and his life in an artists community in Cornwall pre WW1.

The reserve is now very overgrown and settling down into the post breeding lull, only butterflies and the start of returning wader migrants now seek to break the ordinary-ness of each day. Green Sandpipers and Greenshanks are beginning to pass through on early autumn migration and Cuckoos have already left. Below is a badly taken photo of a Gatekeeper butterfly on Ragwort, a plant that is a saviour to so many insects on the marsh in the summer. 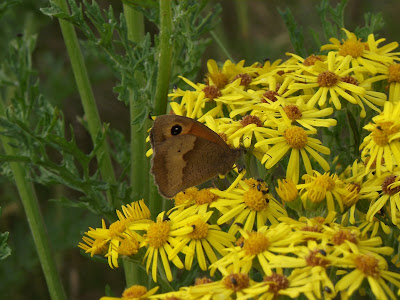 I came across this small toadstall/fungus peeping out of the grass yesterday and have never seen one before. According to my wildlife book it is a Blackening Wax Cap but I'm happy to be corrected on that. 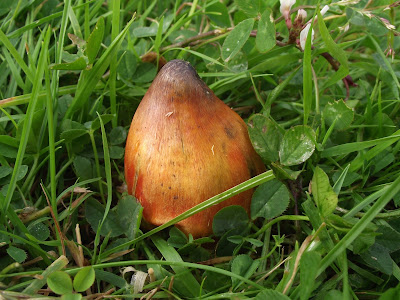 More Flowers and a Surprise Owl

It's been a blustery and cloudy morning but is turning sunnier this afternoon and it's noticeable now how quick the area is drying out, which has finally seen some hay-making take place.
It was disappointing this morning on the reserve to find one of the newly fledged Marsh Harriers dead and judging by how thin it was, it had probably starved. But on a happier note, a friend called me round to his garden the other day to see this Long-eared Owl. It had taken one of his white doves from a dove-cot and was eating it, totally unconcerned by our fairly close presence. The owl roosted in a large bush in the garden that evening and then went on it's way. 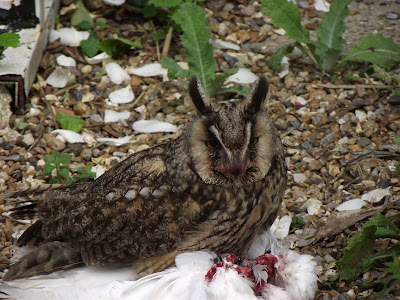 On Tuesday and Wednesday this week, in very warm and sunny weather, my partner and I went over to Reculver on both days to enjoy what has to be one of my favourite places in Kent. Apart from the large Sand Martin nesting colony there, we enjoyed good long walks in both directions, the sea wall going east and up over the cliffs going west. In particular I thoroughly enjoyed a really good selection of wild flowers in the lovely maritime and meadow habitat there but here I can only offer a selection of some more from my daily patch, The Swale NNR.
This first one, that I have found no where else on Sheppey, is Spiny Restharrow. 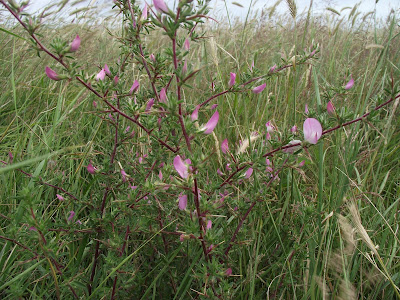 And in one of the ditches, Common Water Plantain. 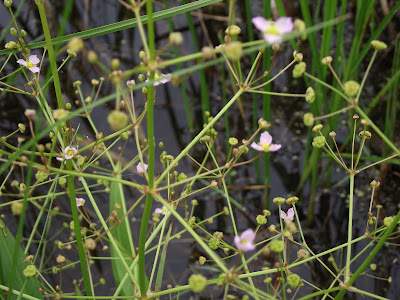 This Marsh Bedstraw is growing on the ditch bank alongside the Plantain above. Both plants have tiny flowers that are easily missed but they have a beauty all the same. 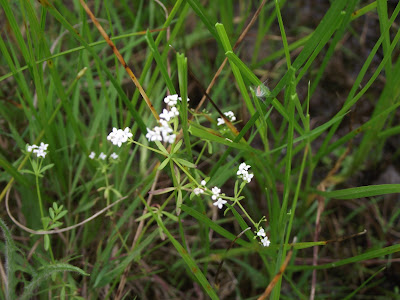 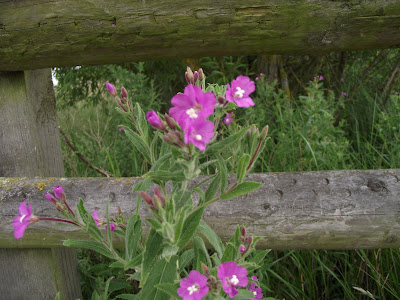 Lady's Bedstraw, so named apparently because women used to use it for stuffing pillows and bedding with. 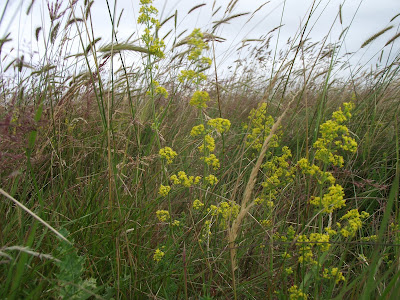 Birds Foot Trefoil with a bit of White Clover peeking in. 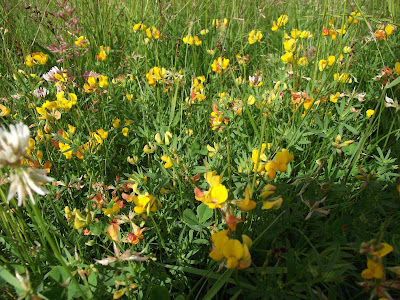 Today was my 69th birthday and I now begin the unsteady march towards my seventh decade. When I was nineteen, twenty-nine even, seventy when it gets here, always seemed as far away and as unlikely as being on the moon. Sometimes on sleepless nights, the thought of it might briefly cross my mind but it wasn't pleasant. It conjured up visions of old people bent over walking sticks, half blind, half deaf, talking to themselves, pissing themselves and smelling and quickly it would be dismissed as too far away to contemplate. Of course I'm almost there now, still upright, still reasonably fit, still not wearing incontinence pads, still able to do most of the things I've always done, so I've convinced myself that it must be ninety when all the things above start to happen.

But when you get to this certain age, you do tend to sit around more, mulling over the last sixty odd years and unless you've had an incredibly boring life, you wonder at all the directions that you've taken and all the emotions that you've felt. After three wives and a couple of lengthy relationships, all of whom remain my good friends, I guess you could say that I've had my fair share of both of them. That aside though, to think back over almost a life-time is to wonder at times how you fitted everything in and travelled from one end of your life to the other. 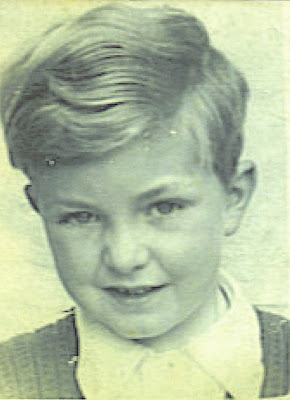 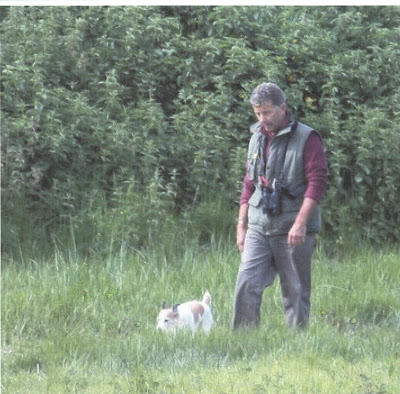 A lot of my childhood was unhappy and subsequently blanked out and I won't dwell on that too much, but I do recall from around ten onwards, that I could be found alone on the marshes near where I lived, sitting by ditches, taking in the wildlife and later learning about it from books from the library. In my twenties and thirties I not only got involved in sport, as a Sunday League goalkeeper and a useful badminton league player but I enjoyed being out on the marshes in all weathers, eel trapping in summer and rabbit catching in winter. I played guitar and wrote poetry and now write blogs. In 1976 I became involved with the RSPB at their Elmley reserve and then a Volunteer Warden for thirty years for Natural England on their Swale NNR here on Sheppey. I became indoctrinated into the conservation world and spent far too many years being told and believing, that far too many people involved in countryside sports such as shooting and those of my earlier years, were the enemy of conservation.
My working life began as a milk boy on a local milk round in the bitter winter of 1962/3 and then I was employed by the Kent River Authority to scythe and maintain ditches and repair sea walls, a favourite job in the late 1960's, early 1970's. For the next thirty four years until I took early retirement in 2006, I was employed in the local docks, for nineteen years as a stevedore and the rest in management there, retiring as part of the middle management team.

Now, as I tread softly and arthritically towards seventy, I've turned back to my old and original thoughts and enjoyment about and with countryside sports and realised that they have a part to play in conservation. If I was young enough I'd love to still be out eel trapping and rabbiting but I have to make do with chatting to farmers, chatting to wildfowlers and simply enjoying most aspects of what's left of the countryside, without bias.
Posted by Derek Faulkner at 14:43 8 comments: