That Time of Year

On Monday one of the ditches that sit between the reserve and the neighbouring farmland looked like this and along it's length was home to several pairs of still nesting Reed Warblers. 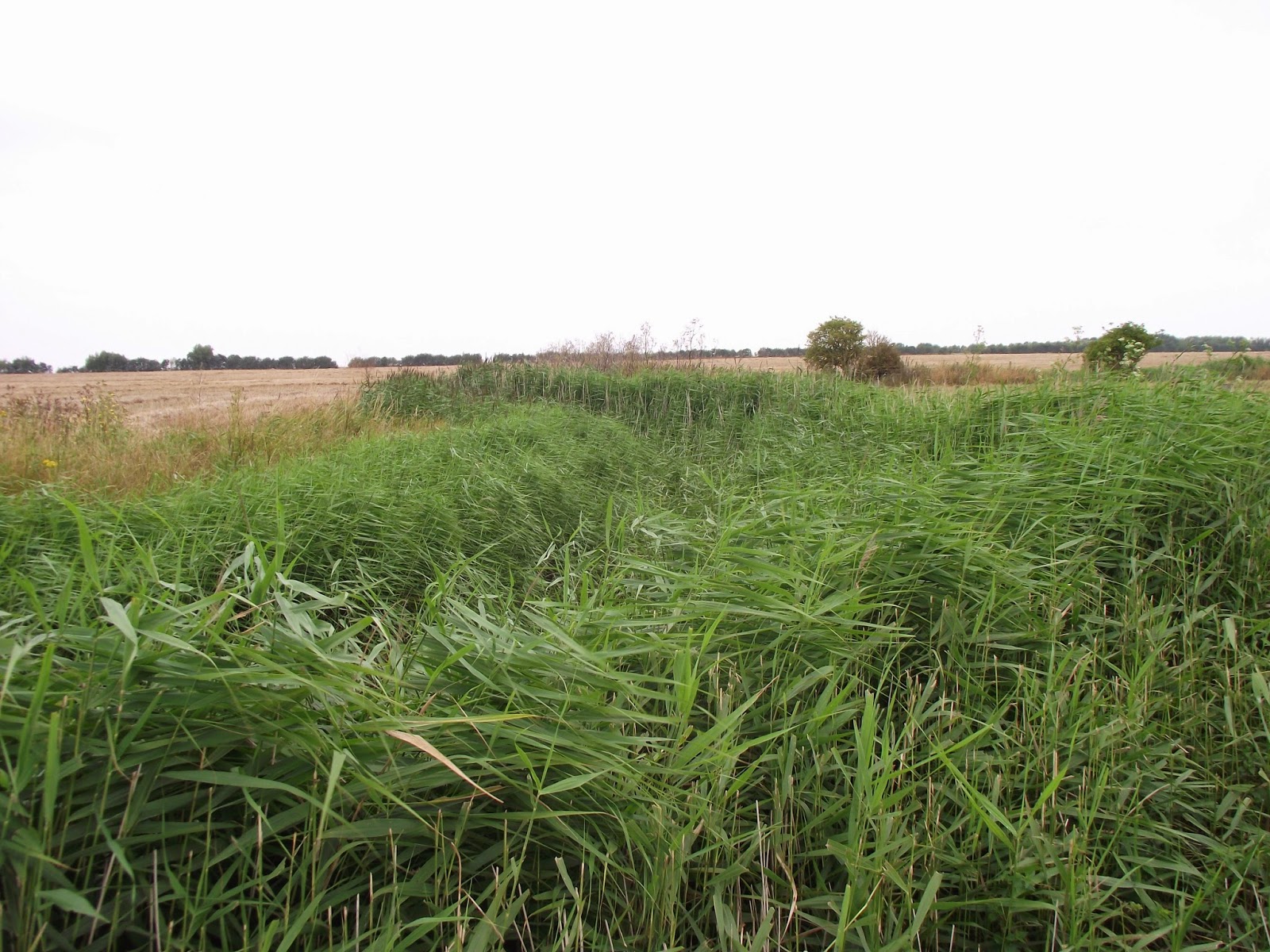 On the same day the machinery working for the Lower Medway Internal Drainage Board turned and begun it's annual ditch cutting across a large amount of Harty marshes............ 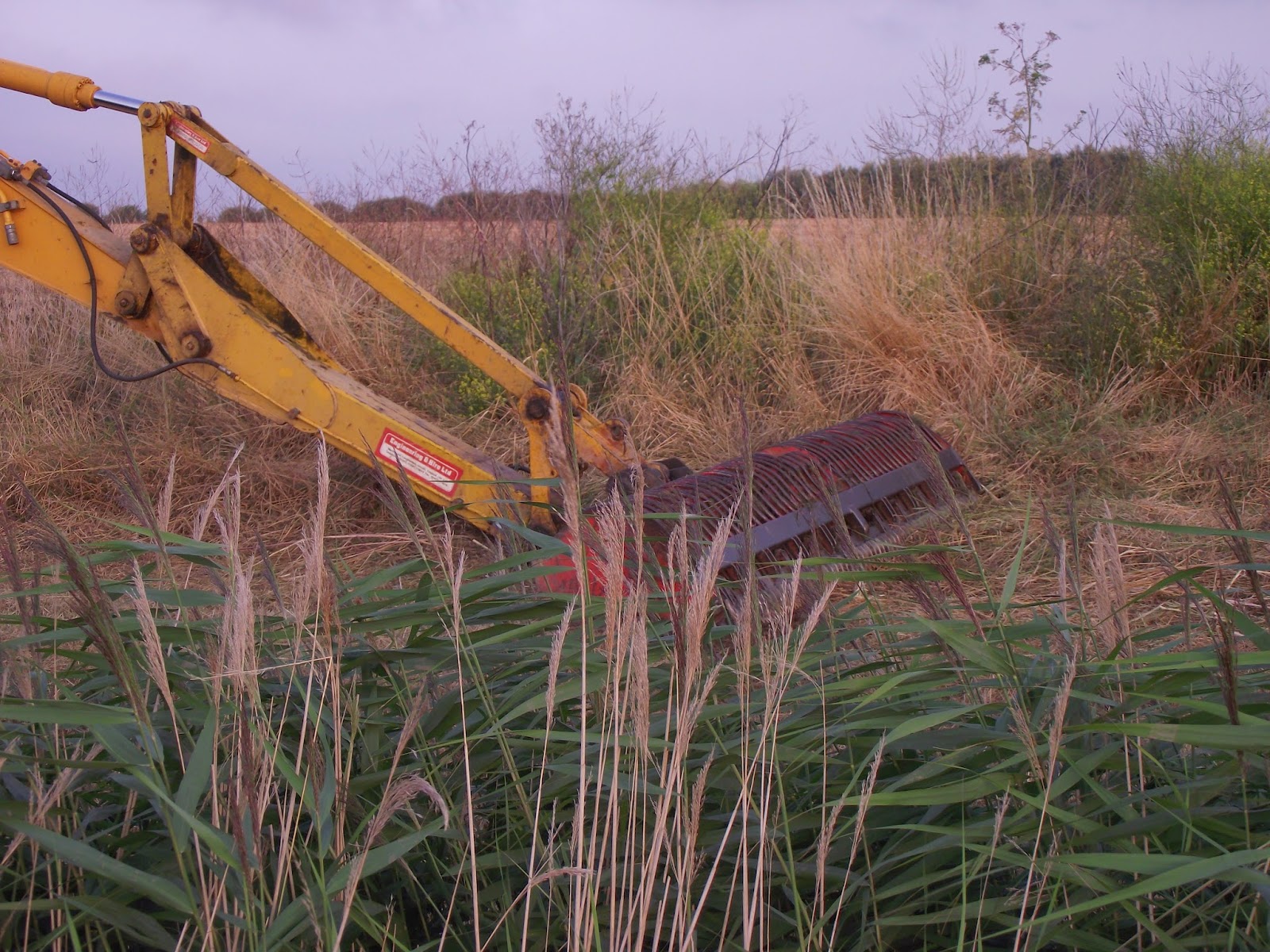 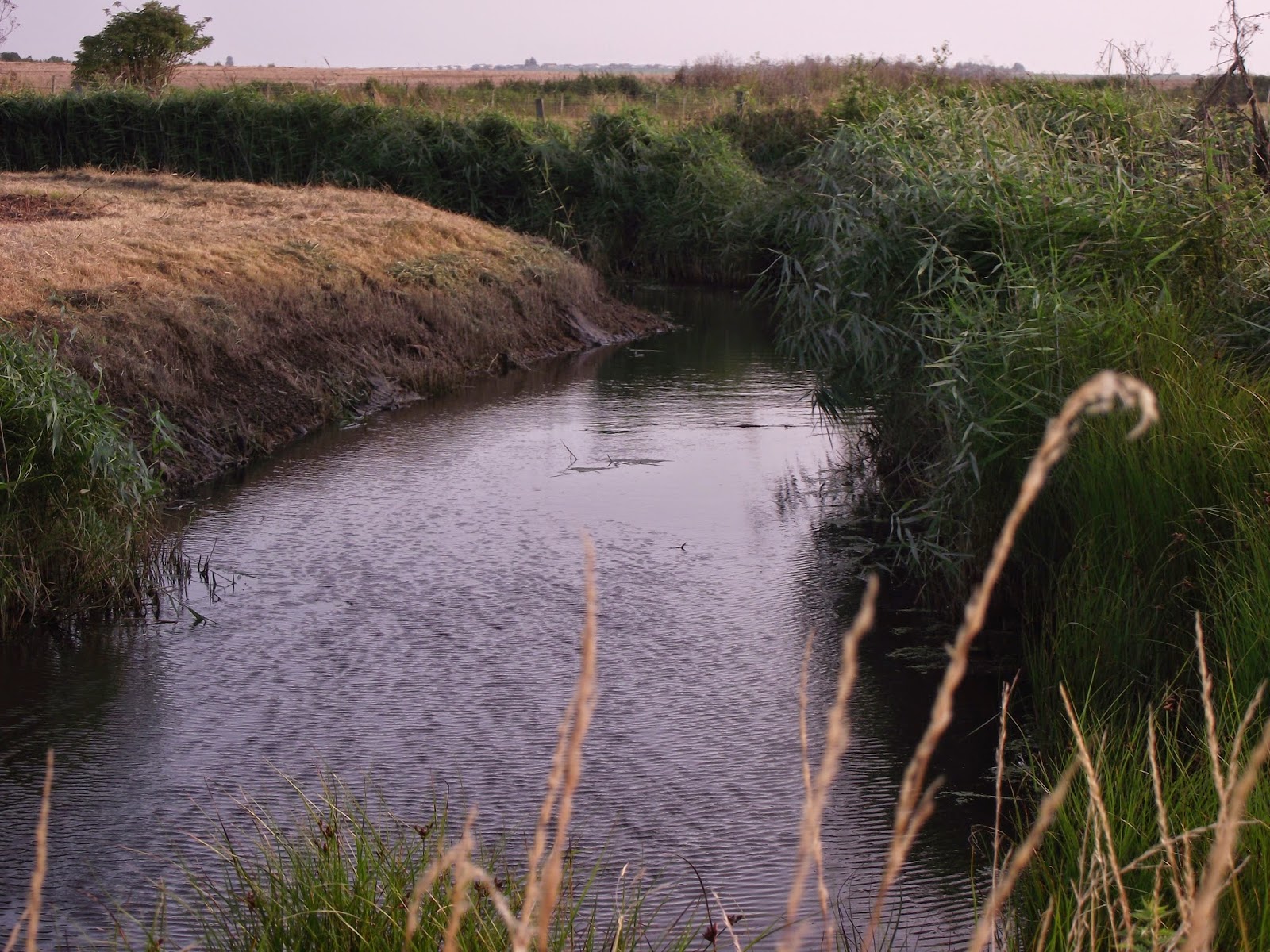 When I wrote to the LMIDB a few years ago and remonstrated with them over the amount of Reed Warbler nests that they must destroy as the meandered across the reed beds of Harty with their JCB,asking them to delay the cutting for just four weeks, they showed little sympathy. Their excuse for doing it at this time of the year was that because they had to access the ditch tops via the arable land,  that it had to be done immediately after the crops had been harvested and before the fields were re-sown.
I guess as it's that time of year, the next thing that we can look forward to is the Environment Agency destroying all forms of wildlife along the sea wall of the reserve by mowing the long vegetation back tight to the soil.
Posted by Derek Faulkner at 15:26 4 comments:

I haven't really that much to talk about in this posting, it was more a case of sharing a piece of "Banksy" style graffiti with you, which I find quite amazing.
Those of you who visit Shellness Point on Sheppey will be familiar with the old military blockhouse on the beach there, below. 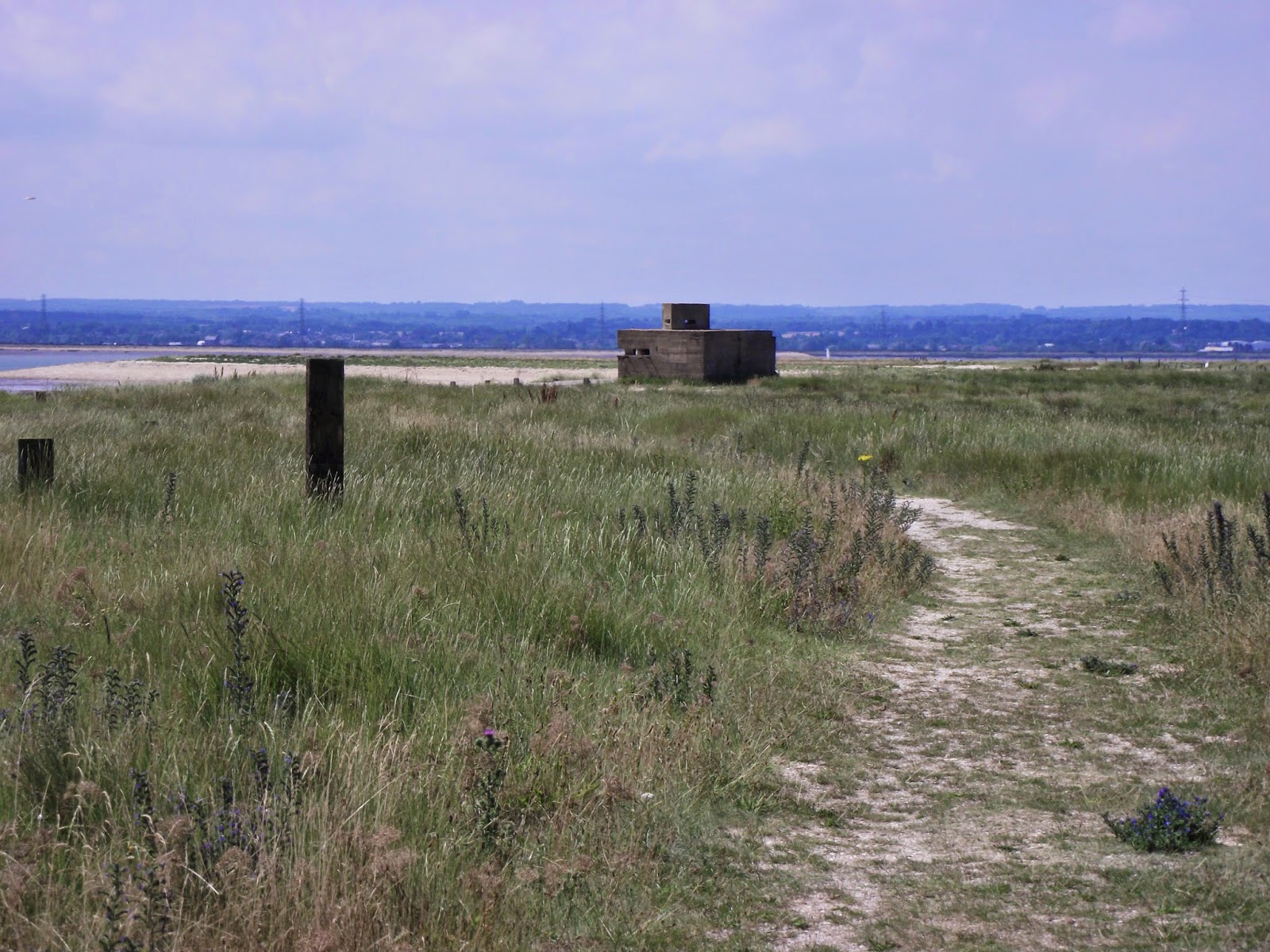 Yesterday, a good friend doing a bird count there was surprised to find this superb piece of graffiti painted on the seaward wall of the blockhouse. I popped out there this morning to get my own photos of the painting. It's so apt seeing as the saltings behind the blockhouse are the main winter roost site on Sheppey of Hen Harriers, hopefully the reserve management will see it as a great asset to the reserve. 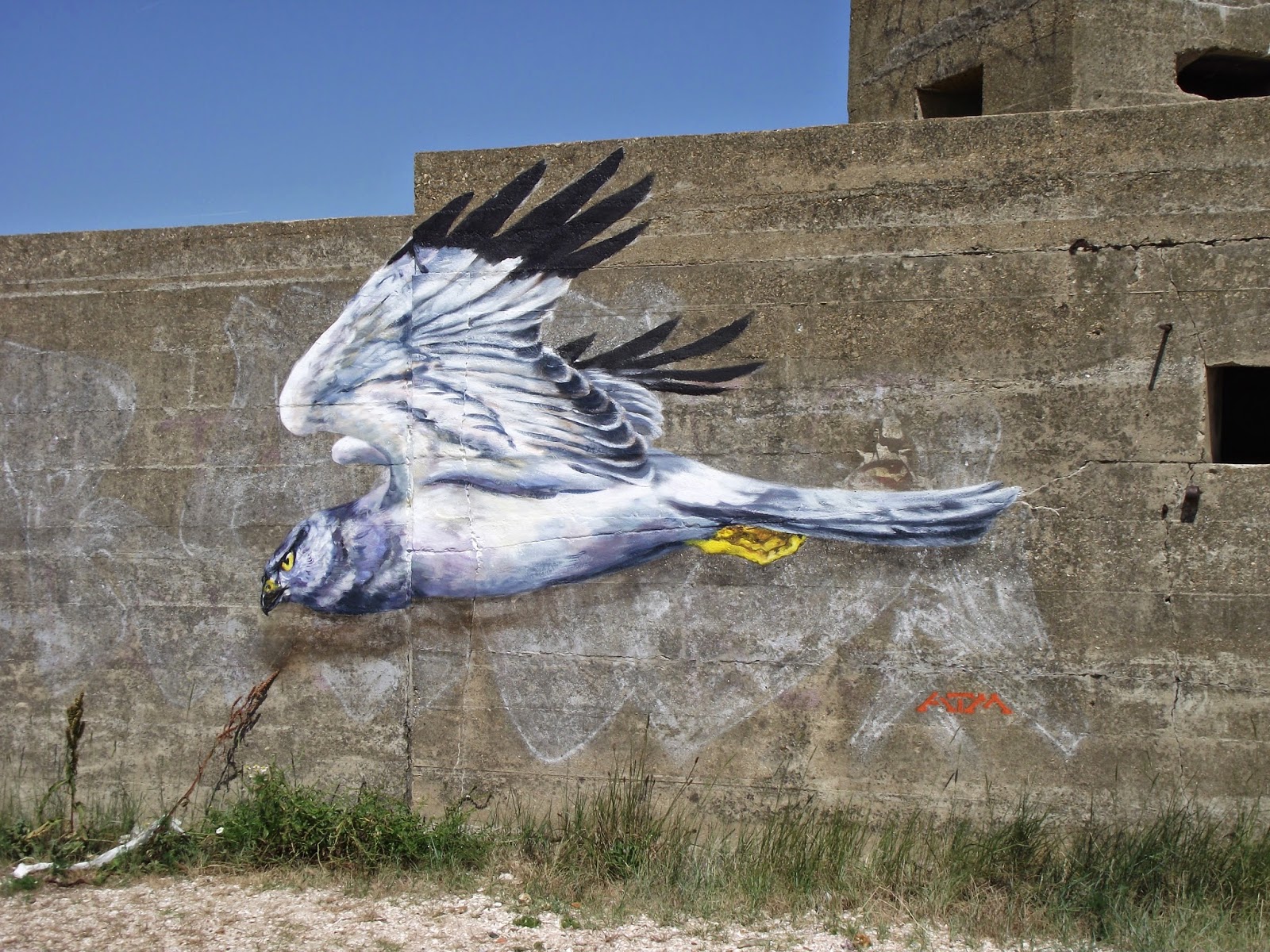 This is how passing boats will see it, quite amazing. 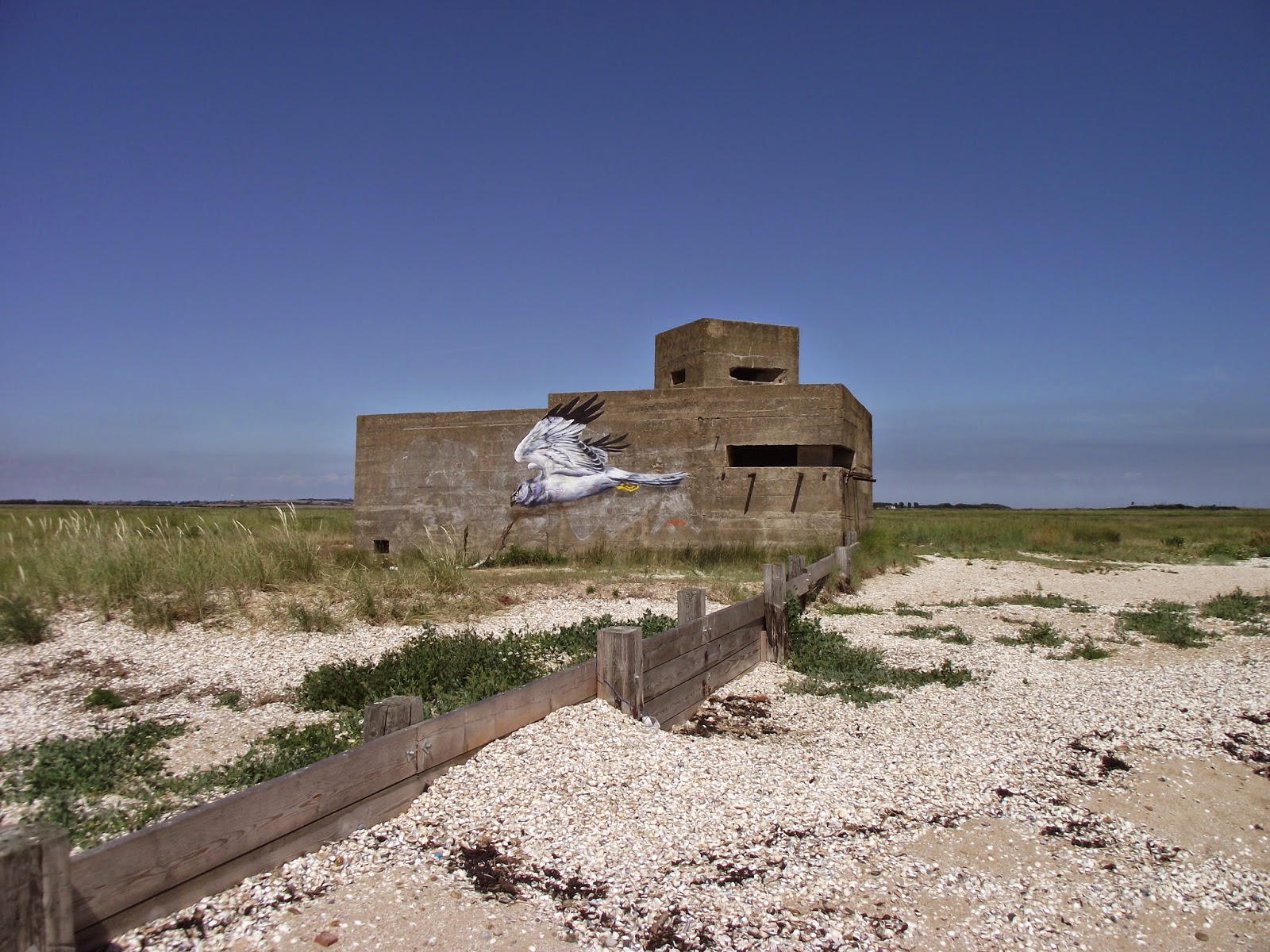 Prior to that I was on the reserve at 05.00 this morning, just after the sun had come up and even then it was very warm but a beautiful morning with the reed beds full of the sound of Reed Warbler song. 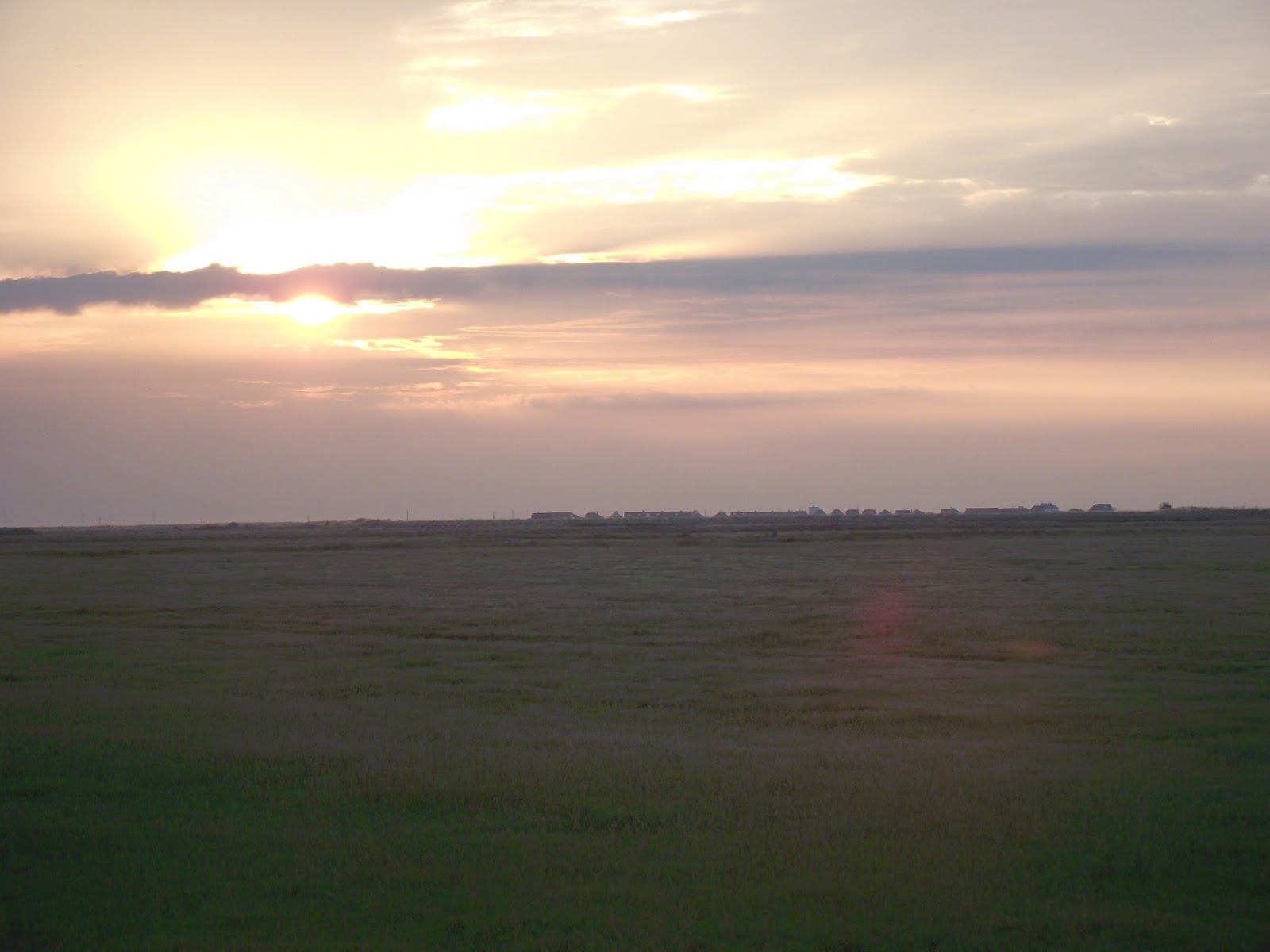 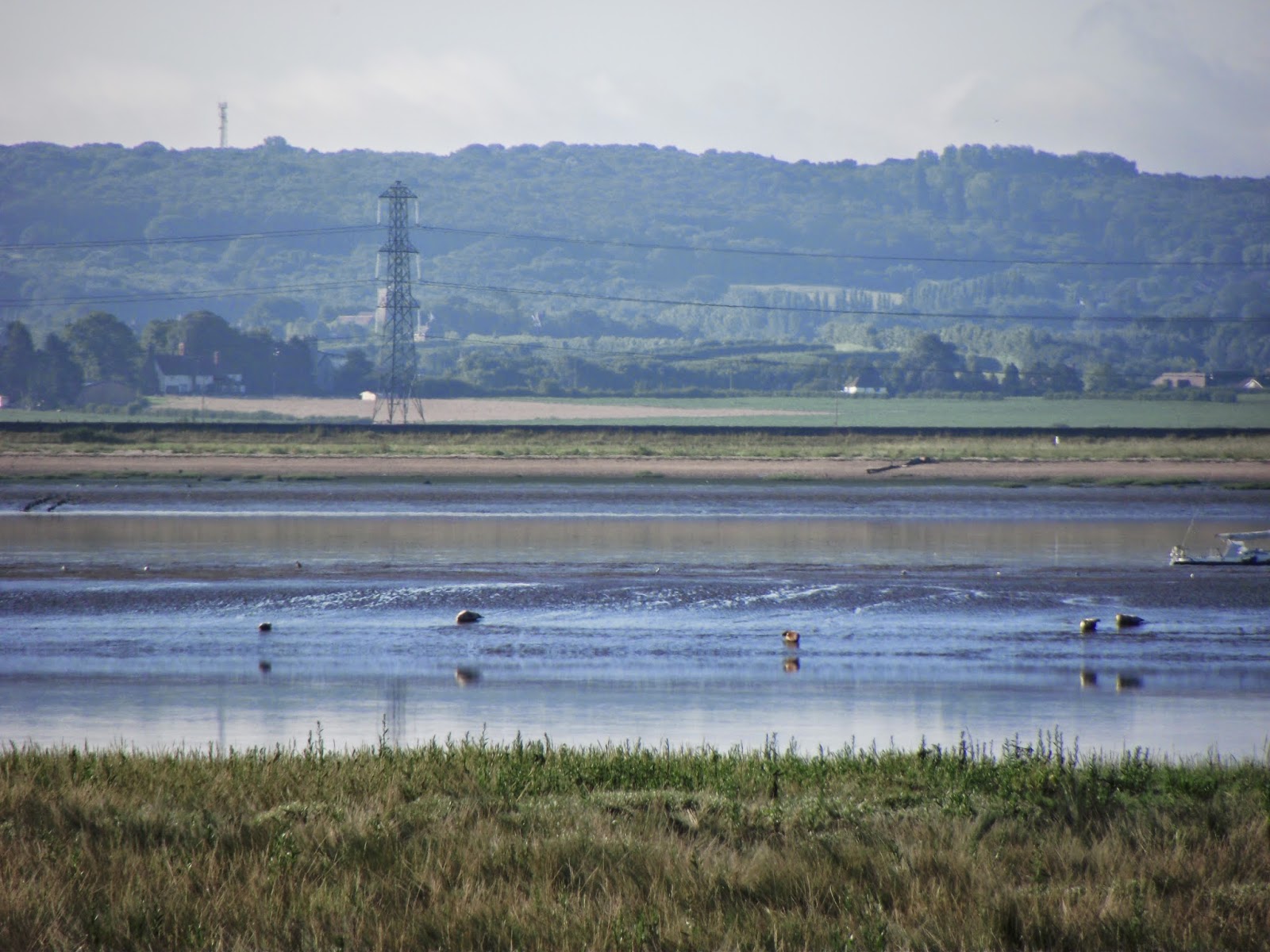 Lastly, as a result of the recent grass topping exercise, some of the hundreds of "emmett casts" or Yellow Field Ant hills were also unavoidably "topped"...... 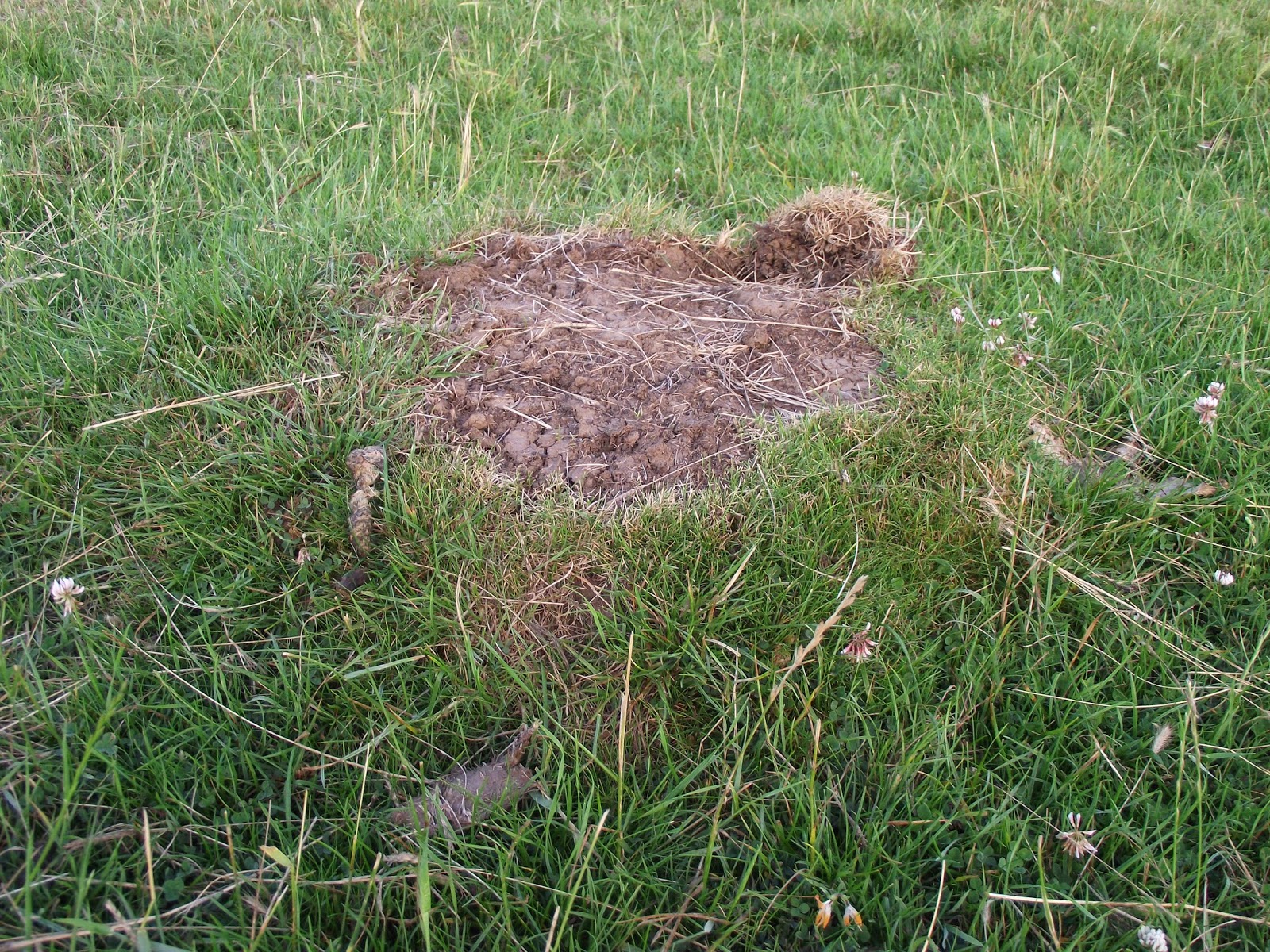 .........but it's amazing how quick the ants start to rebuild the top of their hills, in this photo you can already see the fresh deposits of soil beginning to build up. 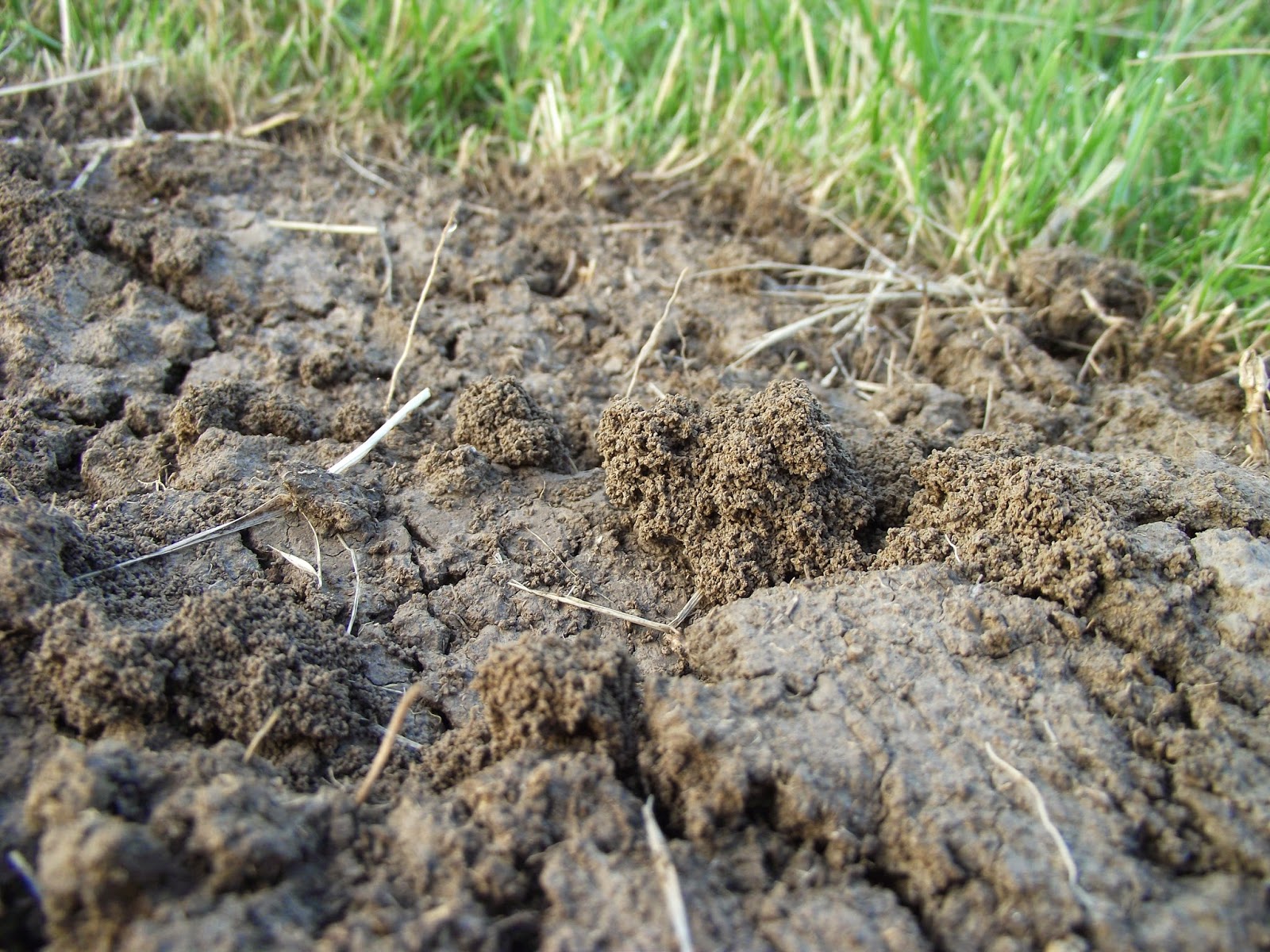 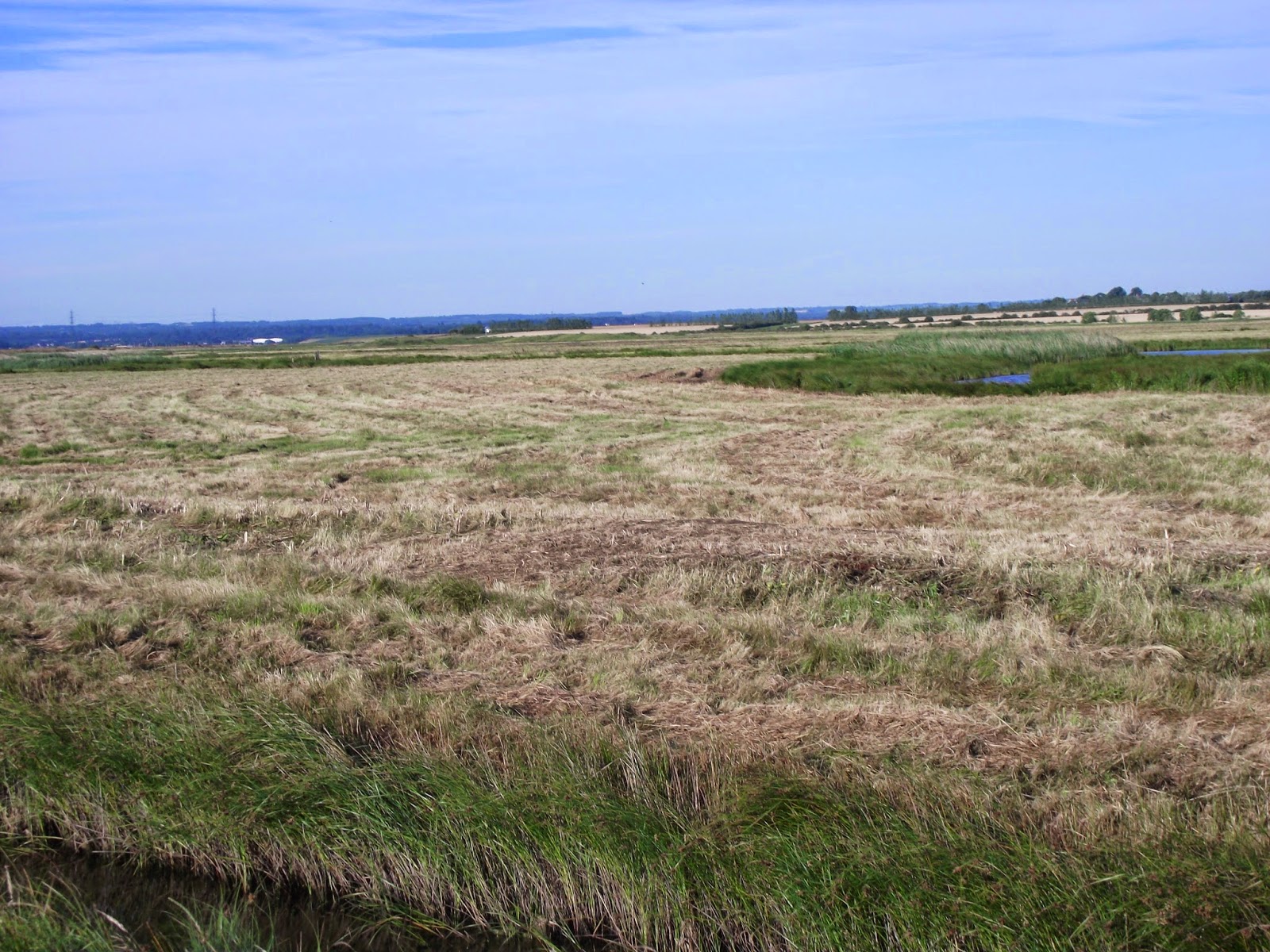 The majority of the reserve has had it's annual vegetation "topping" over the last couple of weeks, in some fields it's pretty much negligible but in others, as above, it is quite noticeable. It is a necessary exercise each year in order to reduce the overpowering growth of club rush in some fields such as The Flood, vegetation that renders those areas as unattractive to the type of birds that the reserve is trying to attract and be seen. It is also vital to catch thistles just as they begin to flower and by doing so prevent millions of seed heads being blown across the grazing meadows and neighbouring farm land.
I know some of the less informed naturalists out there see the cutting of thistles just as they are flowering and becoming attractive to all manner of butterflies and insects, as some kind of travesty but it is something that has always been part of farmland management for hundreds of years. There's nothing worse for a landowner than to see huge clouds of thistle down blowing off a neighbour's land and spreading the seed all across his hay meadows.

Despite the fact that we had a mild winter, early spring and so far, dry and sunny summer, it has been a disappointing summer so far on the reserve for butterflies and dragonflies. After last year's large numbers of both species and the mild winter, we had reckoned on another bumper year but it just hasn't happened so far. Small Tortoiseshell and Peacock butterflies appeared in good numbers in the spring but so far haven't re-appeared at all, the Meadow Brown and Skippers are in small numbers and I have seen few Small Heaths and no Gatekeepers. Dragonflies are the same, with very few being seen along the ditches and waterways on the reserve and it's all a bit hard to understand, perhaps the long periods of wet, waterlogged or flooded weather last winter had something to do with it.

That aside, birds this year on the reserve appear to be having a superb breeding season, many more broods of ducklings have been recorded than in recent years, around 25-30 pairs of Skylarks have bred but by far the biggest success story this year is Lapwings and Redshanks.
Five co-ordinated breeding counts of Lapwings and Redshanks take place each year on the whole of the Elmley NNR, (including the ex-RSPB site) and The Swale NNR and combined totals from these sites recorded 513 pairs of Lapwings fledging 550 chicks. With a productivity of 1.07 chicks per pair this could see the area achieve top spot in Lapwing productivity in lowland wet grassland in the whole of the country and huge credit must go to the Elmley Conservation Trust management for creating the habitat that has achieved this.

With the autumn migration now seemingly underway already, noticeable by the large numbers of hirundines already moving south and passage waders such as Wood and Green Sandpipers now appearing at places such as the Oare floods, the Swale Wader Group carried out the first of their annual autumn/winter ringing sessions on the Swale NNR last week. Unfortunately, due to the dry conditions, few birds were caught but one re-trapped Redshank was of interest. The bird was first rung as a juvenile at Shellness on the 31st July 2000, re-trapped at Harty on the 12th August 2011 and now re-trapped again. At 14 years of age it is the 6th oldest Redshank re-trap, with the oldest being over 16 years old.

Lastly, I was left exasperated again last week after reading the account of one blogger's visit to Sevenoaks wildfowl reserve. While there he was surprised to see a large Mink coming towards him along one of the tracks, whereupon it quickly disappeared into the undergrowth. Questioning it being allowed to be there at the Visitor Centre he was advised that they only trap Mink outside the breeding season, a procedure that I have mentioned before that is also carried out at the Oare nature reserve. Mink are one of the worst wildlife killers that you can have on a wetland nature reserve and can decimate breeding bird populations. Culling them for two thirds of a year but then allowing them to breed and increase in numbers for the other third is plain barmy but is so typical of the weird views of some conservationist these days. It's a bit like going to war but only firing blanks at the enemy in case you hurt them!

Posted by Derek Faulkner at 12:21 No comments:

The Real Out Of Town

It was extremely pleasing this week to see that a review carried out by the BBC Trust has reported that the BBC is failing it's rural viewers with it's countryside programmes.
Apparently the report found that the BBC's content does not reflect the real economic and social concerns of the countryside and a BBC insider is quoted as saying that it feels like the BBC is looking from London into the countryside as a place of entertainment and leisure, and not at the wider social and economic diversity present in rural areas.
Let's face it, most of us who work or who are active in the countryside at ground roots level accept that the likes of Countryfile and Springwatch  are entertaining but they also have a definite blind spot when it comes to showing the grittier aspects of the countryside. I thought that this year's Springwatch had finally woken up to that fact when they actually showed what corvids and badgers are capable of in respect of young animals, chicks and eggs, but they left it at that. Where was the follow on about pest controls and the measures that are used to combat these predators, you can better your bottom dollar that Minsmere, like many RSPB reserves, carry out pest controls such as culling of foxes and corvids but if they do, neither the BBC or the RSPB were willing to show them. It's always about the fluffy side of countryside events and we have a generation growing up being fed only half the story by these programmes. Too quote the British Association for Shooting and Conservation - "shooting is an integral and important part of life in the countryside but is rarely given due credit. It provides jobs, generates income and makes a significant contribution to crop protection and food safety. By creating and managing habitats it benefits a wide range of wildlife. Little of this good news ever gets fully reported." It certainly doesn't on Countryfile.
It could be justifiably argued these days that shooting associations/landowners are contributing as much to conservation on their land as the likes of the RSPB and others on their reserves. And before some of the more sensitive types that call themselves countryside lovers start ranting about the fact that shooting types kill things, well so they do. But what's the difference between what they do and a reserve such as Minsmere where the conservationists stand by day after day and do nothing as the likes of gulls, corvids and badgers kill and eat countless of the eggs and chicks that they are supposed to be protecting.

On my shelf at home I have the complete box set of all the episodes of Jack Hargreaves's "Out of Town" television series. Now these programmes went out in the early evening and were presented by a 100% old countryman who spoke about and described countless old country pursuits such as shooting, ferreting, eel trapping, fishing, killing things, etc. etc. - pursuits that don't exist in Countryfile's view of the countryside. Youngsters such as I learnt a lot from those programmes and were determined to get out in the countryside and have a go at them and I for one took up both eel trapping and rabbiting.
Just look at the features in one of the DVD's - one of them is about pigeon shooting - perhaps they should rename Countryfile as Countryfile (only the nice bits) 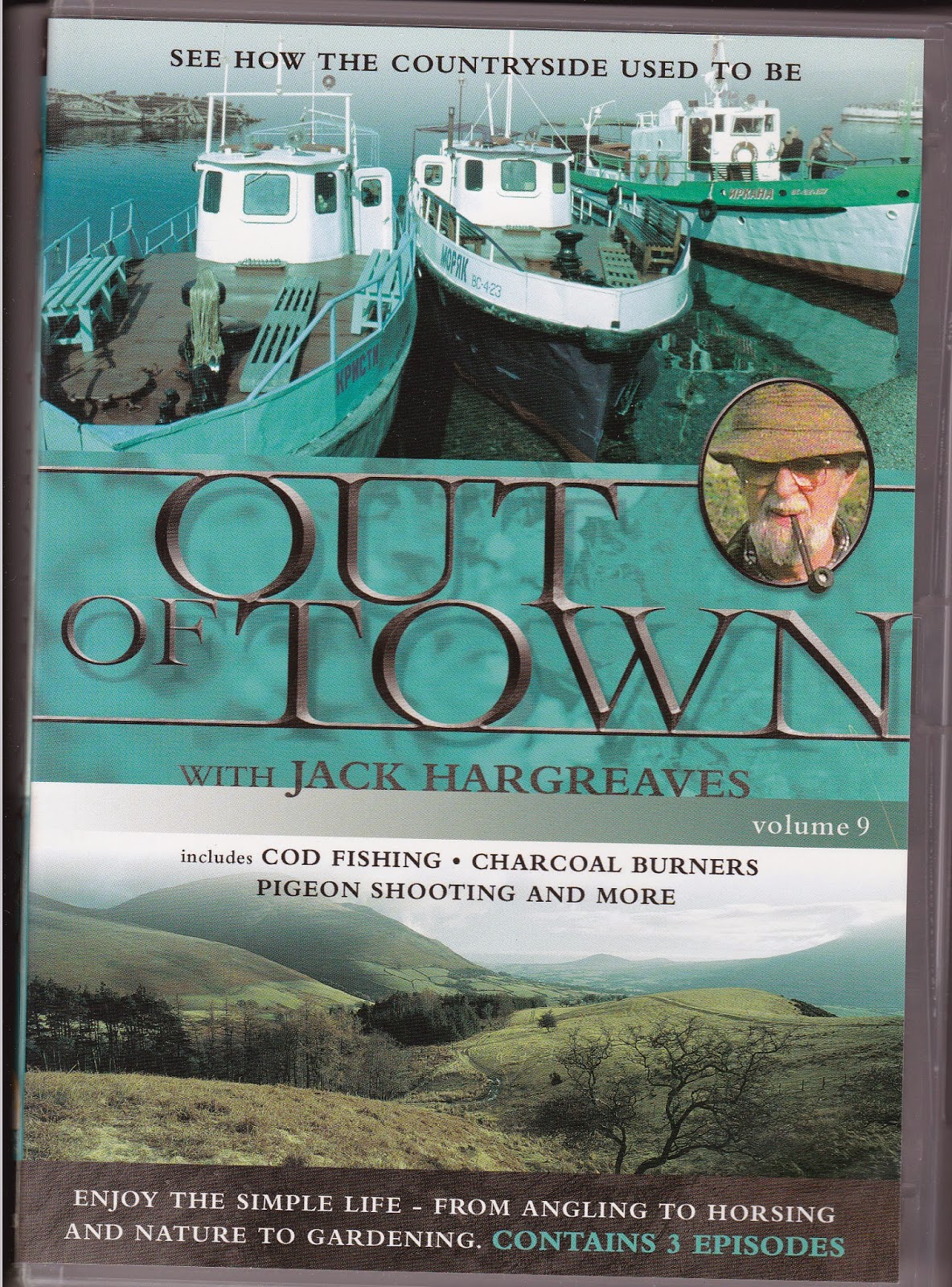