I've had some quite idyllic Harrier Roost Count evenings, during the six winter months that we do them every year. Some beautiful, still and warm October evenings, watching huge red sunsets and even odd March ones where lighter evenings gave a hint of imminent Spring. Many of those in between however, have been pretty awful, standing on a snow-covered sea wall, in icy winds and snow showers, or quickly thickening mist, and all after wading across a part-flooded marsh in water or mud, often too deep for my wellies. Today was a reasonable day, a cold and rainy morning had eventually led into a very cold but brighter afternoon, however swapping a nice warm house in late afternoon with football on Sky and the prospects of a nice glass of wine to watch it with, for flood water, mud and a chilling wind did little for the enthusiasm.

Driving along the Harty Road at 3.30-ish there were a surprisingly large contingent of hardy birdwatchers at the Raptor Viewing Mound, while across the road one or two duck shooters were arriving ready for their weekly evening duck shoot around a specially dug and corn-fed duck pond. Such is the contrast between two interests out there, separated by little more than the width of the Harty Road.

Arriving at the reserve barn and with the light beginning to fade, I surveyed the watery landscape ahead, swore at myself for being there and then the two dogs and I sped/splashed as fast as we dared, across to the Sea Wall Hide. First thing on arriving, check out the saltings for any wildfowlers that might be out there, part hidden in deep and muddy rills. No, and surprisngly, there were none, I had the place to myself, couldn't complain about that. A quick check for any early harriers (they are almost always Hen Harriers that roost on those saltings) but none, they normally come in a rush just before 50% darkness, which is inconvenient when you have a part flooded marsh to negotiate on return in the darkness. The light began to fade quickly but a clearing sky allowed for some spectacular and well coloured cloud formations as a bright orange sun set below the horizon, it was worth being there just for that. Time to scope all round the reserve to see what else was about, especially on the Flood Field in front of the hide, which, as you can see, is now living up to it's name, but it was pretty much deserted, just a few Lapwings and Curlews. However, further along the waterlogged marsh there were 60 White-fronted Geese, 40 Greylag Geese and 50 Brent Geese all grazing and coming towards me along the sea wall was a Short-eared Owl, so it all looked great. 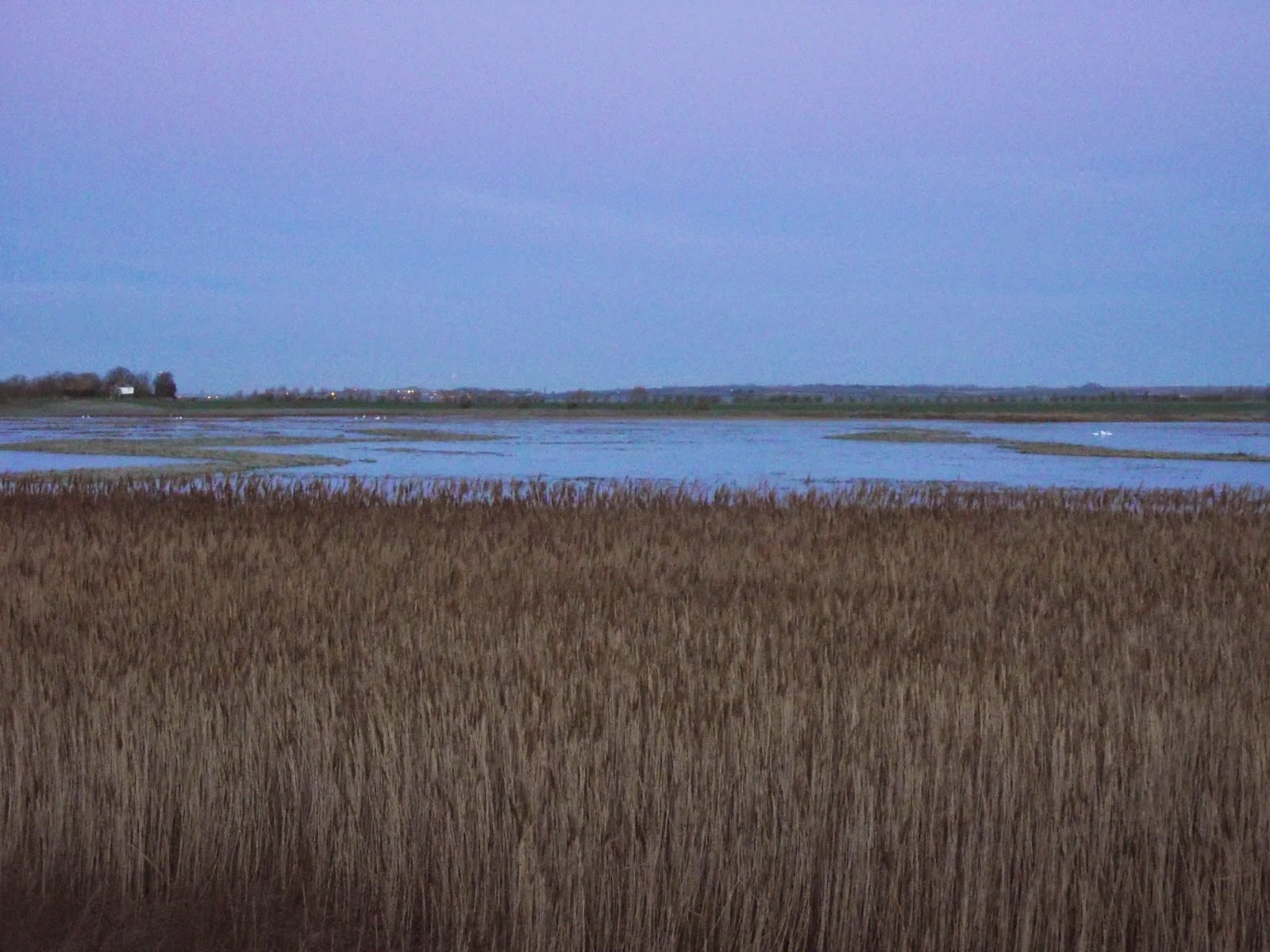 But, back to the harriers, and after repeated scans across the saltings close to Shellness Hamlet, a beautiful male Hen Harrier suddenly appeared - I'm sure it came from across The Swale. Before settling however, it spent some time quartering to and fro across the saltings, accompanied just a few feet away, by a Merlin - it put me in mind of a Lancaster bomber and it's Spitfire escort! Anyway, enough romanticism, the light had become almost gloom and as I prepared to leave, a dark shape making it's way along the saltings turned out to be a ringtail Hen Harrier, which disappeared into the gloom and presumably went into roost close to the male bird. Good stuff and nothing left but to coax my by now numb feet and knees into one last trudge through the mud and water of the marsh as it quickly disappeared into darkness, not a pleasant 20 mins. But, getting back to the car, Radio 5 Live told me that Arsenal were beating Man. City and as a Man Utd supporter that sounded great!
Posted by Derek Faulkner at 18:32 7 comments:

Well, with no visit to the reserve yesterday thanks to it being a miserable cold and rainy day, the plan today was to get out early and do one of my regular dawn patrols. I even put my telescope and tripod out ready, something I hate lugging round the marsh over my shoulder, determined to get a more accurate count of what was about bird-wise. Looking out of the window at 6.00, that plan was clearly not going to happen, we had thick fog outside and the foghorns out to sea were sounding like mad. So it was an early breakfast and read of the paper first, which in some ways only added to my depression. The front page of the Sunday Telegraph announced that over the last twelve months green energy companies were paid a combined total of £53 million to switch off their wind turbines when the electricity they produced couldn't be stored. On average wind farms paid to switch off their turbines earn about one third more than if they produced electricity and sold it to the National Grid. The companies get subsidies to erect the turbines and subsidies to turn them off, all paid for by extra costs tacked on to consumers bills - what a huge win-win, money making con this green energy lark is. Clearly if you want to get rich quick get into green energy, pull the wool over consumers eyes and keep pocketing the subsidies.

Anyway, after choking on my toast and marmite while reading that, another glance out of the window showed that the fog wasn't lifting at all and so I set off anyway, arriving at the reserve in thick fog and general dampness at 8.20. I say thick fog but it could of been thick mist - what exactly is the bloody difference.
As soon as I got out of the car, a few shots from the general direction of the distant and invisible sea wall, indicated that a few wildfowlers were about and so I made my way across the marsh to have a chat with them. At first, as I walked along the top of the sea wall, I couldn't see anybody on the saltings, although a few more shots were fairly close, the fog was that thick. However, by the time I'd walked a fair way along the wall and then returned, the wildfowlers were packing up and making their way towards me out of the fog. Five wildfowlers in total eventually appeared and we had a chat about how the shooting in general had been over the Christmas period - quiet mainly apparently, although they had managed a combined total of three Wigeon and a Gadwall this morning despite the fog. I left them to wander back along the wall to their cars and spent another hour myself out there in the damp and the cold, using my ears rather than my eyes to record any birds.

These winter months are a real challenge for me each year and suffering as I do from both SAD and increasingly, the aches and pains of arthritis, the feeling of imprisonment that the months of November to March bring is quite depressing. There are of course the briefly uplifting days of clear blue skies, sunshine and frost, but far too many like today and I've never been one who could dig out any kind of solace within them. The photo below is not of any significance other than it shows my garden in summer, taken at 9.15 in the evening, how wonderful such long and warm summer days are, the Spring can't come quick enough!

Oh, and by the way, last Friday huntsman were out following their beagle pack as they pursued hares across Harty marshes, so that's the fox hunts and now beaglers openly hunting on Harty, despite a supposed Hunting Bill. What is hypocritical about that is the fact that one of the farming families that allow this hunting to take place on their land will take very aggressive actions against anybody found with a lurcher doing the same. 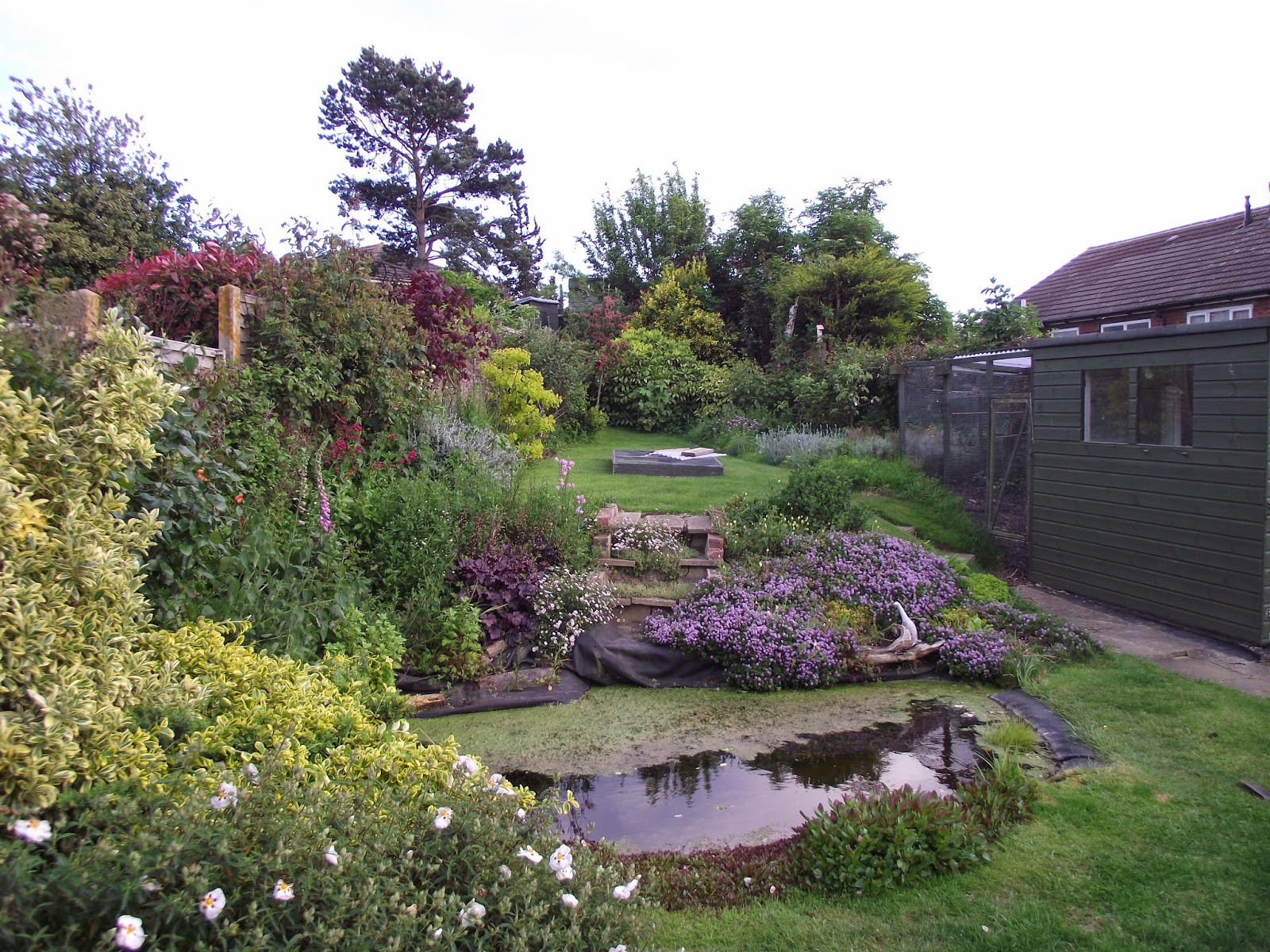