Spring is now about

It has been three quite different weeks. First we had the snow and ice, then the rain and the floodwaters and now this week, a feeling of Spring in the sunshine. With dryer, sunnier weather, the floodwaters have already started to subside but the "Flood Field" in front of the Sea Wall Hide is still looking great.

The photo below, taken from the Sea Wall Hide, shows only half of the Flood and this last week most days, it been full of around 1200 mixed duck species and several hundred Lapwings, quite an impressive sight. The water-logged surrounding fields of the reserve have also had their share of birds - Curlews, Redshank, Brent Geese, Greylag Geese, to name just a few and yesterday in the sun a few Lapwing were also doing their courtship displays over the marsh. Lastly, the White-fronted Goose flock that last week totaled 850 birds, has this week shrunk to c.140 birds and so many of them have possibly departed for their northern breeding grounds already.

Obviously, we will probably still have some colder, wetter days to come but at the moment, all is looking and feeling good. 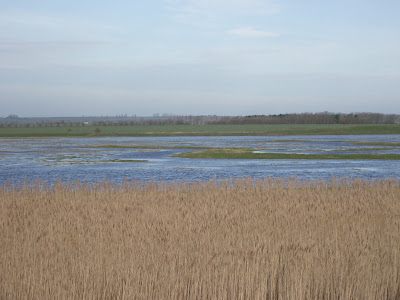 Today it is Monday, a week since the second "Beast from the East" buried our countryside and gardens here in snow and ice.

But overnight the temperature has risen dramatically and that, combined with light rain, has seen the daylight expose a much more familiar landscape to our eyes. Large areas of grass in the gardens and meadows across the road, are already exposed and the pavements, so long dangerously cobbled with footprints frozen into ice, have already softened and are melting into the gutters.  Birds, so long deprived of soft ground and waterways from which to source their food supplies, can hopefully begin to find some food again. Although this will probably not be the case for birds such as Herons and Egrets, they could still end up partially starving as waterways, flooded to twice or three times their width and depth, do not allow access to the fish within.

Yesterday, I risked driving along the narrow road across the marsh. It was indeed risky, covered along much of it's length in hard-packed ice and with a very deep ditch alongside it's whole length, not a lot of room for error there! I managed to get on to parts of the reserve and endured an arduous walk through snow drifts and across frozen areas of water. Because of the frozen conditions there were no waterfowl present, just small flocks of Skylarks, struggling to find any sustenance from grassland buried under snow, and an odd Snipe flying up from the inner parts of reed beds. It was a pretty bleak scenario but if nothing else, it gave me and little Ellie some much needed exercise.

Something that did fascinate me as I made my down the track that led to the reserve's barn, was dozens and dozens of empty snail shells. The grass alongside this track was quite thick and springy and the snow hadn't completely covered it, presumably allowing a member of the thrush family to gain access to the small, yellow snails hidden within, bring them out to the frozen ground and hammer them open.

This morning, now that the early rain has finished, I'm about to depart for the reserve again and with a mild and rainy week ahead forecast, guess it'll soon be a return to the more familiar territory of too much water and too much mud and hopefully, the return of many hundreds of wildfowl and waders.

Just returned and the good news was the sight of 850 White-fronted Geese and 520 Wigeon on the reserve, among other birds.

After the rain came the snow. "Beast from the East 2" turned up during Sunday. It snowed quite heavily for a lot of the day and covered the garden and drive to a depth of several inches. By Monday morning we were not only in Lockdown but also Housebound due to the snow. During Monday we cleared drives and paths and watched it snow and cover them again. The road outside, on the bottom of a hill was entertaining, as cars convinced that they could drive up it on compacted ice and snow, slid back down sideways and often got stuck in awkward places.

On Tuesday the sun came out, the roads thawed and dried out and I was able to drive the 50 miles to have my first Covid vaccination at a mass vaccination centre. But a thaw was not on the cards, it snowed lightly overnight and also froze and during Weds we had some very heavy snow showers that covered all my diligent drive clearing again.

Weds night saw it snow for a lot of the time and we awoke to another 2-3 inches on top of what was already there in the gardens but luckily the salt on the roads kept them clear - I cleared the drive and the pavement outside again. Through today (Thurs), the sun has shone from blue skies and despite the temperature outside side only being around one degree, a slight thaw seems to have set in. It encouraged me to try and reach the reserve, it must of been heaving in un-counted wildfowl and other birds - birds that I've missed seeing since Saturday. Unfortunately, the one narrow road across the marsh  was still covered in compacted ice and snow and with a deep ditch to one side of it, the risks were too great - perhaps tomorrow.