Boxing Day, that day of various traditions and today has been one of blue skies and sunshine and a cold wind, just right for getting out and about. Below is the view across The Swale NNR as I arrived at first light and it would be another three quarters of an hour before the sun finally appeared. 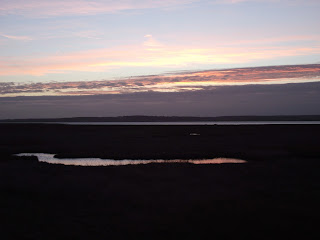 But what of traditions, well as anybody who has long history in the countryside will know that it's traditionally a morning when people will get out hunting, shooting, birdwatching and simply walking here and there discovering the countryside. The fox hunts will be out chasing foxes in the time-honoured way while denying that they do and the wildfowlers will be out after geese and ducks to add to their fridges overflowing with Christmas meat. For me, armed with just binoculars and camera, it always means a dawn start at the reserve to see how many wildfowlers have turned up and to have a chat with those that have. Below are part of a flock of around 115 White-fronted Geese, a variety of wild goose that traditionally visit the Island each winter and are much sought after by the wildfowlers. Fortunately so far, the geese are going no where near the wildfowlers and are sticking mostly to the reserve and the surrounding farmland. 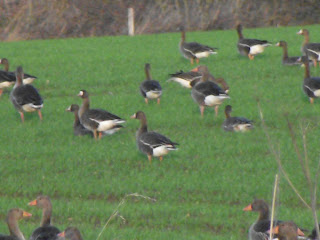 This morning the increasing light eventually revealed three wildfowlers out on the saltings and when they packed up and stopped for a nice chat they revealed that none of them had had a single shot. Pretty much how it's been for much of the winter so far. with little water and few birds but despite that they enjoy watching each dawn rise and the solitude that goes with it. I have experienced thirty odd such Boxing Day mornings out there and the days of twenty-odd wildfowlers being there at dawn are now well gone as dry and mild winters have pushed their quarry birds elsewhere, it's unlikely to improve.
Of course not everybody has such countryside habits and pursuits, some are happy to queue in the traffic jams of cars trying to get in or out of the car parks of large stores, or freeze half to death in pavement queues, desperately seeking their own personal bargain. And lastly, the streets and roads are very busy with the multi-coloured bodies of joggers and cyclists, all neurotically pounding away and determined to lose that extra couple of calories that they were forced to eat as Christmas Day dinner. Next comes New Years Eve, fireworks, drinking and holding hands on the stroke of midnight with people you don't really like but what the hell.
Posted by Derek Faulkner at 11:40 8 comments:

What happened to Winter?

Here we are at the end of December 2016 and no sign of any really cold weather, in fact it's not unlike the December of last year, predominantly mild and basically an extended autumn. The only really difference between this December and last December is how dank and gloomy it has been.
The photo below shows the Harty Road (it runs across the marshes to the reserve), in December 2011 and it was the last time that we had snow of any seriousness. To the left is a very deep, near empty ditch that concentrated the mind on not going to fast in the car and sliding off the road. But are winters such as this, now a thing of the past, have four or five autumn months now taken their place? 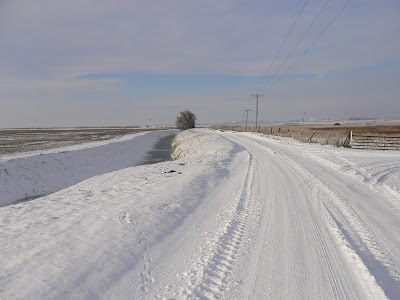 I had a 4x4 vehicle when I took the photo above and so the challenge of getting along the road wasn't too bad. Since then, after a serious of non-snowy winters, I have reverted to a normal two-wheel drive car again and wouldn't want to risk such conditions in that. Up until ten years or so ago, some snow of varying depths was still guaranteed in most winters but then we still had real winters then, not lengthy autumns. Those were the days when it was not possible to get the car off of the drive and so a lengthy walk through deep snow to the pet shop for bird food supplies and household supplies was necessary, or endured. The splendid effect of those days was the fact that many other people were doing the same and the trudge through the snow became a community thing. A time whereby all of a sudden people from the same road shared experiences rather than simple nods in passing.
With bird food purchased it was then back home, sweep 6 inches of snow off of the bird tables and to sit back in the warmth and watch the birds gratefully accepting the life-lines that you'd given them.

Going back to these last two winters, the other event that has not been happening, is normal amounts of rainfall, as I have regularly mentioned this year. Walking away from my car at the reserve barn, this is the sight that I would have seen in many January/February's up until a couple of years ago. Wall to wall flooding that created an arduous walk round for me in wellington boots that were sometimes not high enough and a lot of swimming for my two dogs, but boy, did it attract in many thousands of birds. Ducks, geese, plovers and waders were in such large flocks that it was difficult to count them at times and the wildfowlers waiting on the other side of the sea wall were regularly spoilt for choice when it came to shooting. This morning, and last December, that same view is of unbroken green grass, just some geese and a few ducks, etc. and the ditch water level to the left and right of that gate is three feet below the track. 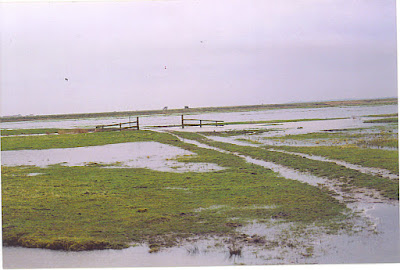 It's been some time since I last wrote about the reserve and to be honest, it's been some time since anything worth writing about, happened. Here we are almost at the end of December and the main talking point, surprisingly, remains that of the lack of water. After this summer's prolonged drought we finally got a few days of rain several weeks ago and things began to look as though they might catch up water-wise. Since then however it has been either dry and frosty, damp and drizzly, or just plain grey and damp, but certainly not very wet. Sure, when I go out to the reserve each morning the grass is always wringing wet from dew, drizzle or mist, and the bare areas are soft and a tad muddy, but the shallow rills are bone dry and the ditches are barely any deeper than they were in July. I was talking to a birdwatcher out there a couple of weeks ago who hadn't been there for some time and he was amazed at the lack of water and as a result, the lack of wildfowl. It is blindingly obvious therefore, that unless we get a high amount of rainfall during the next three months, we will have serious water problems out there by the end of the Spring once drying winds and warm sunshine come along.
Mind you, both the cattle and their owner are enjoying the current conditions. It's mostly mild, the grass is ticking over nicely, the gateways, etc., haven't become impassable due to cattle damage from excessively wet conditions and no doubt they will be taken off for calving much later than is normal.

Bird-wise, well things aren't too bad in respect of variety, it's mainly the wildfowl numbers however that are well below what would be expected there in a normal wet winter. The very low water levels in the fleets and ditches and a bone dry Flood Field, have meant that numbers of Teal, Mallard and Shoveler are well below what used to be recorded 10-15 years ago, only Gadwall are present in reasonable numbers. The 300+ feral Greylag Geese  are surviving the shooting that is going on all round the reserve well though, they always seem to find the safest routes in and out of the reserve on a regular basis. Their numbers are regularly boosted as well by 48-50 truly wild White-fronted Geese, always a joy to see and hear.
What else, well the day-time roost of Short-eared Owls out on the saltings seems to be holding their own at around 10-12 birds and encouragingly, they are regularly joined for a night-time roost, by two female and one male, Hen Harriers, a far better number than in recent years. The only other birds of note are a long stay Crane and a Richards Pipit. This Skylark sized and rather plain Pipit, an autumn/winter vagrant from Asia, is back to the exact same spot along the reserve sea wall for it's third winter running. Other than that, on a day to day basis, the reserve can be pretty boring at times due to the low numbers of birds.