Time and it's attendant weather have moved on considerably since the depression of my last posting and with increased regularity the weather has become sunnier and hotter. This week as I write this the weather is hot with unbroken sunshine and due to remain so for some time yet - we're into a heatwave!
After my last posting I looked back at those of the earlier years, when I believe that they said something meaningful, had content and venom,and was minded to give up all together, because I wasn't really saying anything new or interesting, but we'll see.
April ended with a 20 hr period of heavy and continuous rain and cold N. winds on the 29th/30th that brought about a lot of surface flooding on the reserve. Some nests in the ditches and fleets were submerged and many nests or chicks of Lapwing and Skylark in the flat marsh were either covered in water or the chicks died of cold and wet in the long vegetation. For the Lapwings at least, the breeding season on the Swale NNR has been pretty much a non-event - too few pairs and bad weather affecting those that did breed. The other significant aspect has been the late and reduced return of summer migrants, Reed and Sedge Warbler numbers are well down from previous years -it was a funny old Spring!
As has already been mentioned, since then the weather has improved to a state of hot and sunny but the water levels on the reserve are beginning to drop away quite fast and the ground is very dry and hard, but so far, the grass levels have held up and the cattle and their calves are doing very well. This year, given all the activity in the fields, after two years of hay shortages, it looks as though hay will be plentiful - it may not be much cheaper but it will be plentiful. One of the Harty farmers this year has sown several fields of spring barley, a crop just beginning to re-appear on Sheppey, and it's good news because it means that the fields it's currently growing in were either fallow over the winter or with a catch crop and all benefiting wildlife.
In my garden last winter I cleared, re-dug and manured a new border and this Spring planted it with perennial flowers that attract and feed bees and butterflies. They are all flowering well, as you can see below, but where are the bees and butterflies?, they just haven't appeared this year, a whole border of lavender in my front garden, but not a bee in sight, I am so disappointed and worried. 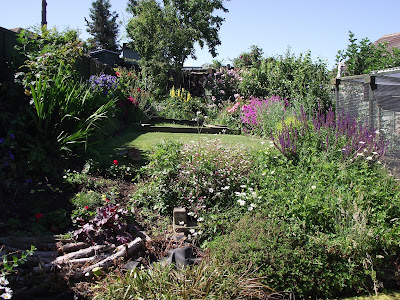 This last few days I have been on the reserve by 05.30 to avoid the heat, little Ellie doesn't like it, and anyway it's so fresh, cool and quiet, quite superb. The evening sunsets have also been quite magnificent, this first one, looking west across the grazing marshes opposite my house, shows the sun just disappearing below the horizon at near 22.00 at night. 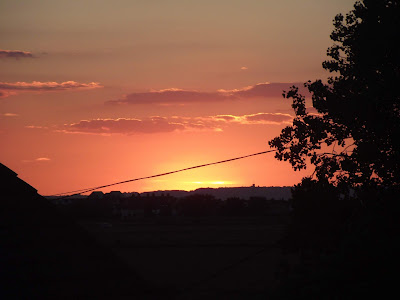 and this one, an incredible 22.30 as I went to bed. Just think, in winter we'd of had six hours of darkness by then, oh happy summer days! 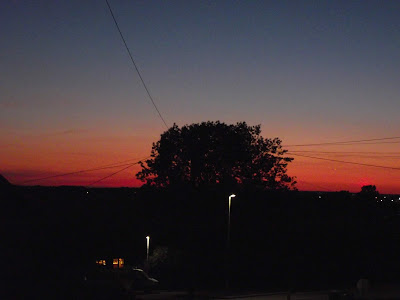 Lastly, as I drove back along the Harty Road on Sunday morning at around 8.00, this young Kestrel was spotted on a fence post beside the road and so I leaned my camera out of the car and took a photograph from just five foot away. 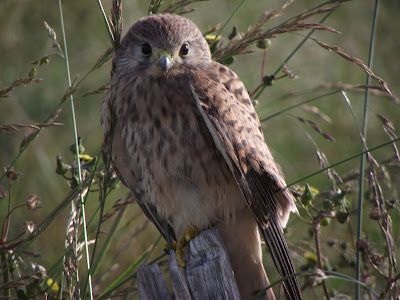