Everyone needs a father

In this crazy world at the moment, we're going into un-chartered territory for some months to come, with our lives, health and finances all at risk from the Coronavirus. We're all clearly going to have a lot of time on our hands for reflection and I've been doing that just recently in respect of my father. I show him below during WW2.
He died in 1969, when he was just 50 and I was 22. Up until his death I had always had a pretty poor relationship with him, he worked extremely hard to support the family, worked himself to death in all respects, but he was not a good family man. At 22 years old, I had a whole lifetime in front of me and so little time for a father that shared little with me, that, as far as I was concerned, could come later in my life, which of course it never did. 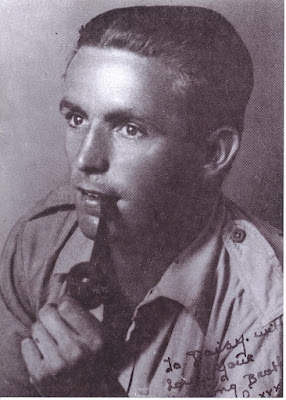 I was the second child, born in 1947, a year after the first child, a girl, died just a week after birth. Therefore when my sister was born in 1950, I guess he always saw her as the replacement for the first one and favoured her at my expense for the rest of his short life. Later came three other children but my father had his favourite and so it was and so I spent my childhood and teenage years being somewhat withdrawn from normal family relationships. As a result I guess, I've struggled with relationships all of my life and still do to this day, always needing a great deal of time with just myself.
However, around ten years ago and after the death of my mother, I gradually found myself being drawn back into the family circle after a long time out of it. I guess as I plodded through my sixties and into my seventies, I was being looked upon as a father figure by my younger siblings, a funny kind of realisation. That led me, as the curiosity of old age often does, to begin researching my family history and in particular, the male line from myself backwards. That, while it has been very successful, rewarding and enlightening, has exposed a great and much regretted hole in my life, all  those missed bonding chats with my father. The missed opportunities to ask him what growing up on Sheppey in the 1920's was like, what the countryside and living conditions were like, what his parents and his aunties and uncles were like, why he went into the army in 1935, earlier than he should by saying that he was eighteen when he was really only sixteen.
I was lucky in that I managed to get hold of his complete army record in the Buffs until de-mob at the end of the War and seeing what he did and endured through that helped me realise that there was far more to him than the person that I thought that I knew, when I was just twenty two.
I would dearly loved to have chatted with him over the last ten years or more, because everybody needs a father and I missed the opportunity to have one.
Posted by Derek Faulkner at 16:20 35 comments:

Spring is waking up

After what seems like a whole winter of rain, heavy rain, gales and severe gales and of course storms, this week is giving a glimmer of hope that Spring is finally very close. No gales and little wind is forecast and indeed yesterday, we had the rare treat just lately, of blue skies and sunshine. Walking across the waterlogged reserve in sunshine made it all seem so much better and a couple of pairs of Lapwings were even doing their aerial courtship displays. Not to be outdone either, Skylarks were singing, high in the sky and from several parts around the marsh, we're so fortunate to still have a good population of them  - so things really did seem better.
With lengthening daylight hours, some birds are now being encouraged to begin nest building, Tits are taken material into nest boxes and the poor old Rooks, with tree tops battered by constant gales, have built and re-built their nests several times.
Just outside my conservatory I have a large rosemary bush which is currently covered in small, pale blue flowers and every day several bumble bees spend all the daylight hours visiting it for it's much needed early food source. Daffodils are in full flower, tulip flowers are beginning to show from among the leaves and my lawns have been cut several times, although they are a tad wet. Unfortunately, that doesn't mean it's nice and warm and I'm now approaching the latest date that I've ever got my tortoises out of hibernation in the garage. I'll wait another week and then will have to bring them into the warm and see how they are, they might have to be left to wander about in my conservatory till it warms up in the garden.
Back on the reserve, large areas are still covered in water, or at best, water-logged and muddy and it's hard at the moment to see how ground nesting birds such as Lapwings and Skylarks will be able to make an early start to nesting, should they be so minded, but wildlife normally finds a way. Certainly one or two duck pairs have already begun because I've started to find the tell-tale signs of crow predation in the form of new duck eggs that have been pecked open.
What of the Harty farmland alongside - well the autumn sown crops of rape and wheat are doing OK despite much water-logged soil. Both rape and wheat plants are beginning to noticeably increase in size now and it will only take a couple of warm days to see a great spurt in growth. The one flock of sheep on the farmland should of begun lambing by the end of the month and I guess that the owner of them will also have his fingers crossed for some warm and sunny weather.
So all in all, Spring seems to be slowly waking up, the signs are all there - it can't come quick enough!