Surely not Autumn and what's that smell

Since my last posting the intense heat, sunshine, humidity and drought was endured right up until last Friday night when we had a storm and the first proper rain for two months. Saturday saw hot and sunny weather with strong winds that quickly nullified the effects of the rain.
However, yesterday and so far this morning we have been in the throws of constant two days of heavy grey skies, regular bouts of heavy rain and drizzle and a strongish warm wind. After several weeks of mostly enjoying a Mediterranean summer, it's as though literally overnight we have suddenly morphed straight into an English autumn. The desert scenario that last week was my garden, has plants now dripping with water and though not soaked, the soil is at least moist down to a couple of inches, and will benefit my plants for a few days, far more than me and my hose would of done.
Walking round the reserve this morning under heavy skies, drizzle and a really warm wind, it was like walking in a sauna and my clothes were damp from sweat, (not that you probably want to know that.)
To continue the autumnal feel, large numbers of Swifts and mostly juvenile Swallows, were passing through the sky in a south-westerly direction, not rushing but still starting their migration south. And the autumn wader movement has begun as well. This always begins in late July/early August and so the name Autumn movement is a tad wrong but it's always been that way. Common Sandpipers and the odd Green Sandpiper are now stopping off along the marsh ditches and fleets as they re-fuel on their way south, there's a lot of hot and sunny summer yet to come but clearly these birds, having done their breeding in northern climes, see no point in hanging around anymore.
In an attempt to beat the rain, huge acreages of corn were harvested both day and night last week but some fields of corn and spring barley had to be left and will have to be left now until a few days of hot sunshine dry them out again. The most noticeable after-effect of the harvest now is the strong and not exactly nice smell that is drifting across Sheppey on the warm and damp winds. For many years now, the local arable farmers have taken in, and are presumably paid to do so, the by-products of sewage farms. Throughout the spring and summer months large heaps of this black, compost like product, are created in the corners of fields. With the surface quickly drying out there is very little smell, until now as the heaps are being dug into and tractors spread it across the stubble fields. The smell is quite awful and with several holiday camps down wind a few miles away, complaints are constant every year but it is the countryside after all and farmers have always manured their fields.
Posted by Derek Faulkner at 10:49 9 comments:

As I sit here today on yet another day of endless heatwave, looking out on a panorama of yellow, baked hard and cracked countryside, I find myself having thoughts of autumn and winter, how weird is that! Weird because I loathe the winter with a vengeance, those days of getting light late, dark early, and short days of daylight in between. Days when another year of your life seems to disappear in just six moths of doing nothing-ness.
Last night, as the light began to fade on yet another long day of heat and humidity, I sat in my conservatory relishing the cool breeze that was beginning to blow in the door and pulled the cork on a bottle of red wine. I gradually worked my way down it as twilight became dusk and dusk became darkness. Ellie, my terrier, sat in the doorway and watched the movement of moths on the Verbena bonariensis flowers and the occasional "plop" of something in the pond. A small bat flew round the garden, a late Wood Pigeon landed on the fence, my mood grew more nostalgic, a half moon appeared, it became completely dark as I sat there, the bottle was empty, I unsteadily rose and went to bed.
But back to today and those thoughts of autumn and winter, those seasons yet to come. I love those thick mists that envelop the marsh and make walking across it a challenge, I love the hard, white frosts and blue skies of a frozen dawn when a great, orange sun rises with no warmth and creeps round, hugging the horizon. But that is about it, I don't know why I'm spending this hot, sunny afternoon thinking that way.

"The Water Rat was restless, and he did not exactly know why. To all appearances the summer's pomp was still at fullest height, and although in the tilled acres green had given way to gold, though rowans were reddening and the woods were dashed here and there with a tawny fierceness, yet light and warmth and colour were still present in undiminished measure, clean of any chilly premonitions of the passing year..............there was a feeling in the air of change and departure".  (Wind in the Willows)
Posted by Derek Faulkner at 15:18 12 comments:

In my last posting, I hastily made the suggestion that the heatwave was over, that has not turned out to be the case, a couple of gloomy, chilly days soon reverted to the relentless heat, sunshine and dryness that preceded those days. Yesterday in the media, appeared  Met. Office aerial photographs of the whole of the UK in May, coloured lovely and green and this month with it coloured mostly yellow/brown. So, with temps. over the next several days forecast to be in the high 20's-low 30's we remain in the throws of a heatwave that is fast starting to equal that experienced in the famous one of 1976.
On the reserve, the breeding season has more or less finished and we're now entering the quiet, between seasons spell which can become quite boring. Many of the birds are now beginning their annual moult and as a result don't sing much and have become quite secretive and listless. Birds such as Lapwings and Curlews, that probe the ground for invertebrates to eat, obviously haven't a chance of doing that in soil like concrete so have mostly moved out to the low-tide mudflats. The one think that this time of the tear is note-able for is Horse Flies and this year is no exception. These large flies follow you all round the grazing marsh, buzzing noisily around you as they attempt to alight on your skin and boy do they bite. Their bite is like someone sticking a red hot needle in your skin and can often turn septic, people watching me from a distance must wonder why I'm walking round with arms going like a windmill all the time.
On the farmland alongside the reserve the rape crop has now been harvested, albeit with low tonnages according to the farmer, thanks to the dry soil. The wheat and barley crops will now follow in the next couple of weeks, although opening up some ears of corn recently, it seemed obvious to me that the grains of corn were not very plump and so their tonnages are also likely to be low. All forms of farming are struggling due to this heatwave at the moment, crops are showing poor yields and livestock are also not finding a lot of joy in pastures full of bone dry, yellow and brittle grass.

I noted in the media the other day that the BTO, who annually tag cuckoos with tiny satellite devices, are advising us that already, several of the cuckoos that summered here, are transmitting the fact that they are already south of the Sahara on their way back to their wintering grounds in southern Africa. Swifts will soon be joining them before the main autumn migration rush begins in late August/September.

Well blow me down - within an hour of writing the above, rain started falling - not heavy torrential stuff but gentle, steady rain that if nothing else refreshed the plants and the gardens and took the humidity out of the air - and it lasted for five hours - the soil is hardly wetter but it looks better.
Posted by Derek Faulkner at 10:13 8 comments:

All things must pass

As I sit here writing this, it's early Monday evening, the heat and humidity of today have speedily ended. We now have heavy grey skies and a chilly and gusty N wind and in the space of an hour or so our lengthy heatwave has dramatically ended. All of a sudden windows are being closed and the prospects of being able to sleep tonight, after weeks of sweaty insomnia, seem to be rising greatly.

But oh, what a joyous two or three weeks it has been, non-stop blue and sunny skies, and relentless heat baking the gardens and the countryside to a tinder dry yellowness. Well, I say joyous but cracks are running through the flower borders of my garden that you can put an arm down, making watering simply a waste of both time and water and the lawns are a crisp white-yellow colour. How much longer the plants and indeed the farmland crops, can hang on for without rain before perishing, is hard to know but no rain is forecast in the near future.

Last week saw me celebrate my 71st birthday and on one of the days my partner and I spent most of it visiting a couple of favourite spots in the Kent countryside, Reculver and Faversham Creek, both on the coast. Later, in the evening, we visited an Indian restaurant and then decided to visit a site near to my bungalow called the Shingle Bank, to watch one of our famous Sheppey sunsets. Half a mile from my bungalow the road runs from my village to the local town of Sheerness, with countryside one side and the sea on the other. Acting as a sea wall a high and wide bank of shingle has been created on to which you can drive and sit there looking out to sea. As twilight began to settle we took this photo looking east along the bank to the cliffs that form the high northern side of the Island. 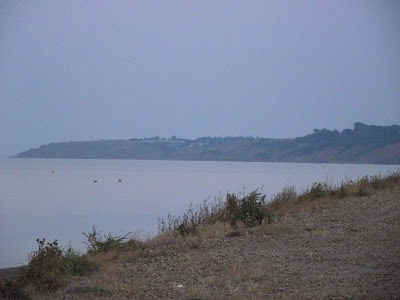 Behind the cliffs and looking out to sea, my bungalow is among those in this next photo. 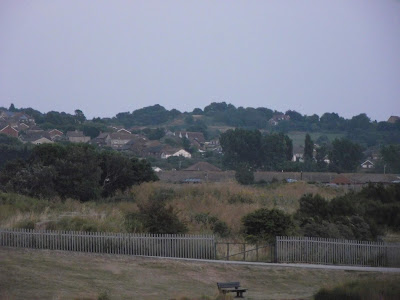 And as the light faded, the sun began to settle in the western sky, it was almost 9.30 then. 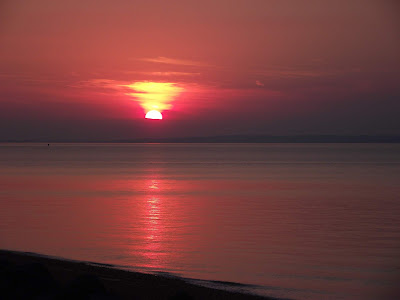 The following day we drove in to the centre of Canterbury and treated ourselves, on a beautiful hot and sunny day, to an hour's punt trip (not us in the punt). The River Stour runs right through and at times, under, the heart of the city and to see some of the old buildings from that aspect was really delightful. 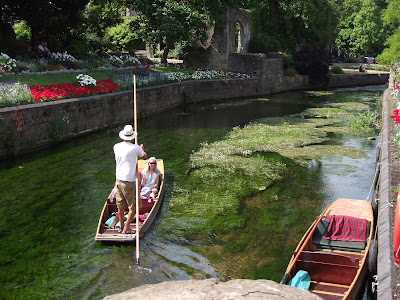 We actually went under that old building and out the other side. 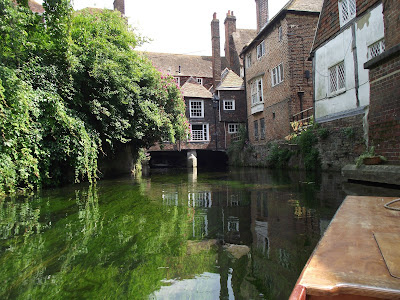 So, the last few weeks have blessed us with superb weather, though once or twice exceptionally hot, and we have thoroughly immersed ourselves in it. I have been going to the reserve at 5.00 in the mornings to enjoy the cool and stillness of it and so that little Ellie doesn't get too hot. Apart from trips out I have been going for daily cycle rides along the nearby sea front and countryside and it's been a real joy to live in shorts and T shirts.

I'll leave you with one of my favourite annual photos - the caterpillar of the Cinnabar Moth. 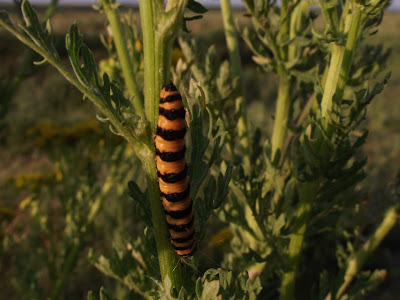