The drought here in North Kent continues to take hold. According to the Sunday Telegraph yesterday, many parts of E. England have had just 2mm of rainfall over the last couple of months. Strong drying winds and very warm sun have been the most dominant type of weather lately and you can spot tractors carrying out cultivations across the arable fields here by simply looking for the dust cloud that is following them. The rather poor photo below shows the bone dry, yellow stubble fields stretching as far as the eye can see. 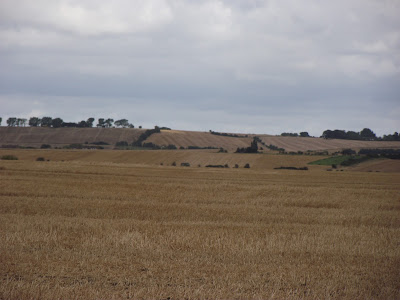 Farmers are often regularly depicted as the next best thing to Satan, especially if they also combine farming with game shooting. One farmer here on Harty however, does do his bit for the wild birds on his land. The set-aside strip shown below is around 400 yds long and 12 yds wide and is typical of the sort of thing that he sows each year. The grasses below the sunflowers are an amazing mix of around six different varieties, each producing seed heads bursting with small seeds. With the grasses there are also seed producing plants such as Fat Hen and Redshank and I've taken mixed bunches home for my canaries and British birds and they love them, as do the finches and buntings there each winter. Last year winter a nearby strip, with chicory flowers instead of sunflowers, was attracting a flock of Linnets of up to 160 birds daily and that flock was often joined by Reed Buntings. 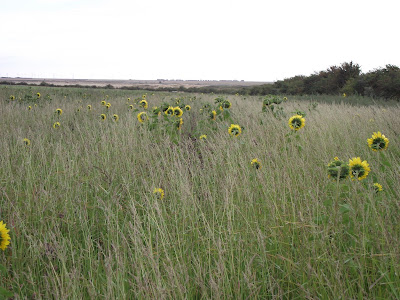 Unfortunately it's not all good news. The two photos below show the current wheat stubbles along the Harty Road and just a third of the several hundred Greylag and Canada geese that are feeding on the spilt grain each morning. This and another field alongside, are sandwiched between Capel Fleet on one side and the dark green mound in the background, the other side of which is a large pond dug to attract ducks for shooting. The wildfowl are also shot in Capel Fleet, often in large numbers. It's hard not to believe that in several days time (Sept 1st) when the shooting season commences, that those unsuspecting geese will fly in as usual to be met by a barrage of shot from the syndicates that ring and shoot the area. 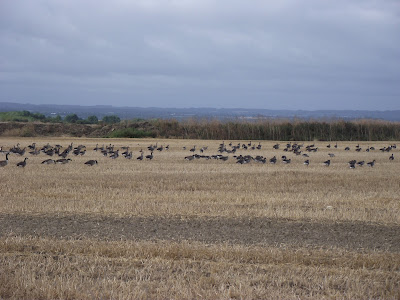 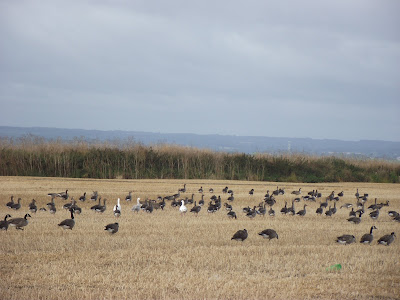 Last Tuesday night we had a few hours of rain, which after several weeks with no appreciable rain, was most welcome. However the following day saw very warm sun and strongish winds and the moisture disappeared very quickly and so we continue with increasingly dry countryside here in North Kent. The grazing marshes are now looking quite yellow and dry and water is disappearing quite fast. Just look at what is normally the large splash of water in the Flood Field on the reserve, it seems to disappear by several inches almost daily and unfortunately will now not get replenished until winter rains. 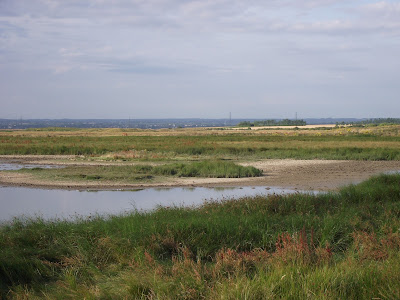 Likewise this large clump of water lilies in one of the fleets, only a few weeks ago the water was almost level with the upper leaves of the plants. It's all part of the annual cycle of events here on the North Kent marshes as I've mentioned before, water-logged in winter and bone dry in summer, although this year water levels have hung on longer than usual. 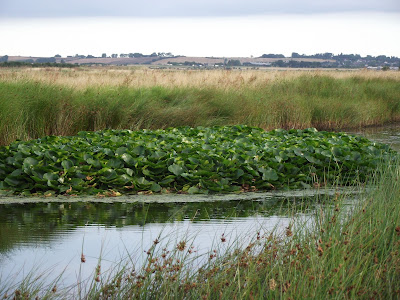 However, the continual warm, sunny and dry days has seen an upsurge in butterfly numbers, with really good numbers of the various brown butterflies now on the wing, including this Small Copper. 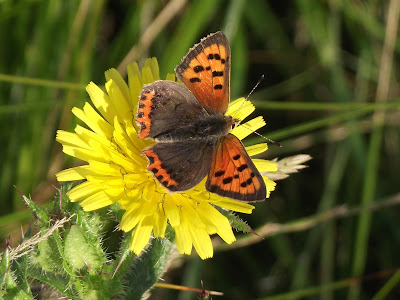 And some late broods of wild pheasants have also been seen on the adjacent farmland, presumably soon to be joined by many hundreds of their hand reared cousins, ready for the new shooting season. 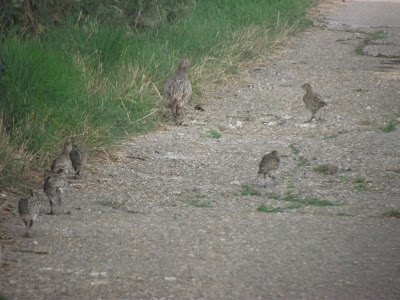 And on the subject of hand reared game birds, there was a disturbing announcement from Natural England last week, they have granted a licence to a gamekeeper on a shooting estate to potentially kill up to ten Buzzards! The reason - these birds of prey are guilty of harassing and often killing some of the game bird poults while still in their pre-release pens. Now it has to be remembered that pheasants are artificially reared by the many millions each year to be released into the countryside to be shot, we're hardly talking about an endangered species here. It's possible that some shooting estates can often release more pheasants and partridges in a year than there are buzzards in the whole of the country and Natural England's judgement here has been severely questioned. The concern now is that this will start a creeping tide of calls from other shooting groups with what they will see as valid reasons why various birds of prey should be culled.
While I'm talking about shooting it's amazing that we're only three weeks away now from the resumption of wildfowling in front of the reserve, the last six months since the last season ended seems to have wizzed by. It's no secret that I get on OK with these guys and they have a minimal effect on what wildfowl we get on the reserve, mainly because the reserve only gets wet enough to attract good numbers of ducks for the last couple of months of the winter.
Posted by Derek Faulkner at 07:24 No comments: