Since my last rant about the inclement weather, it has improved somewhat. We've had regular heavy showers and a couple of lengthy rainy periods and always followed by very warm sunny days. The rain hasn't added a single centimetre to the ditch levels, which are now at ridiculously low levels, but it has definitely greened up the grass on the grazing meadows. Harvesting operations on the surrounding farmland have almost all finished now and all the straw bales such as you see below have been carted away. Those wheat stubble fields will remain like that now and have already been re-sown with rape which is beginning to show as lines of green seedlings. All that's left to do now is to re-sow this year's rape fields with wheat for next year's crop and so the annual rotation goes on. 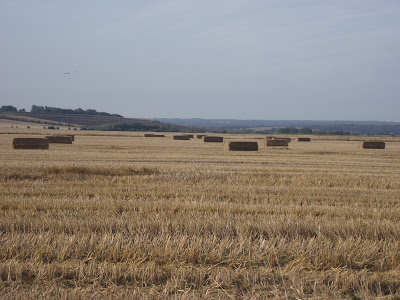 Back on the reserve, the bulls that have been servicing the cows through the summer months are due to be taken away to their winter pastures this week. One of them is shown below and I really was that close, they are a very docile and trustworthy breed thankfully. 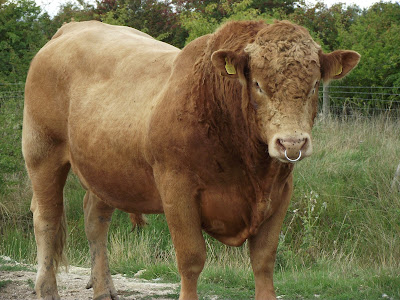 Below is one of the other bulls with one of his harem. I was amused to be told the other day about one of several bulls on a nearby reserve. It has had to be withdrawn from "active service" for this year because the regular rearing up of such a huge frame onto a cow's back, put so much weight on it's back ankles that they became strained and swollen. Not all fun in the stud world it seems! 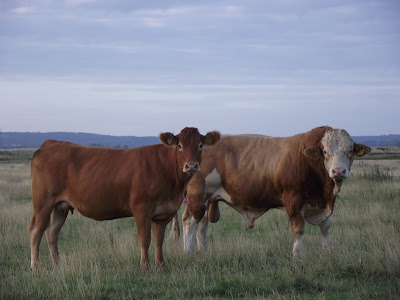 The pair of Mute Swans hatched seven cygnets this year on the reserve but only these four have survived, they are doing well though. 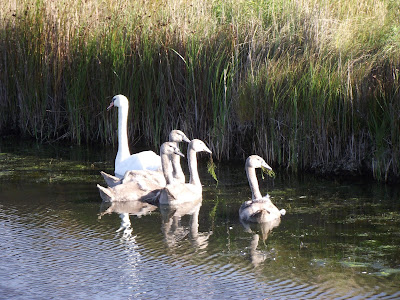 In the early mornings lately, when the grass is wet from rain or heavy dew, I been coming across numerous small frogs making their way through the grass away from the ditches. It happens most autumns and I guess they move into dense vegetation ready for winter hibernation. The photo makes it look a lot bigger than it was, it was only about an inch and a half long, probably one of last year's froglets. 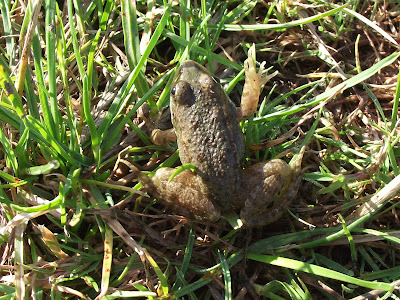 After heavy-ish rain all afternoon and evening yesterday, the walk across the reserve this morning was wet, muddy and dominated by wind. Now yesterday's rain I was grateful for, we've long needed it, although one of the local farmers who still has to get his well ripe corn harvested, wouldn't agree. But being out this morning in wet conditions that were exacerbated by grey skies, spits of rain and a strong and cold NE wind was depressing to say the least. I needed to wear clothing very similar to what I would wear in the winter and had to continually tell myself that yes, really, this is the height of summer, if only by the date.
Last night I sat indoors watching the World Athletics Championships in London and to avoid putting the central heating on in mid-August, had to get up and put on a thick sweater. And the athletics, well they were taking place in non-stop rain and chilly winds, which affected the performances of many of them to some degree.
So this morning, as I wandered round hunched up in my winter coat, I also found myself reflecting on the fact that so far this year, our summer has consisted of two hot and sunny weeks seemingly many moons ago. Two rare weeks during which some people found it necessary to complain about how hot it was, well I hope that they are happy about these current awful weather conditions, because I bloody well ain't and I doubt many of the competitors at the athletics were either.
Posted by Derek Faulkner at 10:11 5 comments:

We are still losing the battle against the endless dry weather that we've had all year. Every time that we've been lucky enough to get a few hours of rain or the occasional storm, it is immediately followed by drying weather. On Wednesday afternoon/evening we had a few hours of much needed rain but yesterday the whole day saw gale force, blustery winds and spells of warm sunshine and today is very similar. Within hours all semblance of dampness in the ground had disappeared and this has been the case after every wet spell this year, so the drought goes on. Mind you, with a few dry and sunny days now ahead, the local arable farmers will be pleased, they are well behind with harvesting the wheat and barley. They have been plagued by regular showers, which although not prolonged, have the effect of making the corn to damp to harvest for a day or so and so things have been very stop-start and frustrating.
The picture below appeared on the front page of our local paper this week. In one of the roads in our village, a road with houses both sides of the road, this dead fox appeared, hanging from the gates of a house, alongside the pavement, with a snare around it's neck. It has been suggested that the owner of the house snared the fox in his back garden but instead of quietly disposing of it, it was deliberately hung on the gate as some kind of trophy. As you can imagine, neighbours were appalled and called in RSPCA representatives who are also in the picture. Unfortunately there was little they or the police could do because the snaring of foxes is a legal pursuit in this country but what a pratt the owner must be to draw such attention to himself. Apparently he has had to take a stay away from the house now to escape local abuse .
Now I'm no Anti, I don't have a problem with foxes, or other pest species being culled, but not by the snaring method which involves the animal putting it's head through a wire noose which if it isn't set properly, slowly chokes the animal as it struggles to get free. 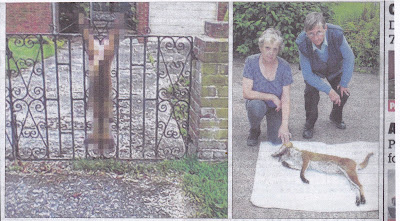