The annual Swale Barge Race took place a couple of Saturdays ago in warm and pleasant weather and was it's usual spectacular sight. The hours running up to the start of the race at 08.45 had seen benign and windless conditions and I wondered if the race would actually get under way but as if by magic, just half an hour before the start, a fresh breeze sprang up and everything turned out perfect.
Diane and I watched it from the beach at Shellness Point, easily the best vantage point, especially as the barges had to tack to and fro across The Swale bringing them close in to the shore. 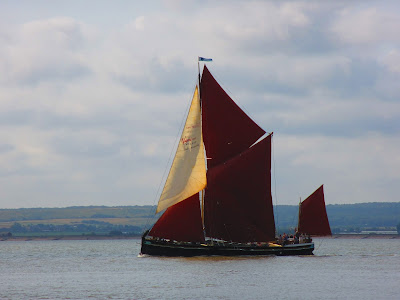 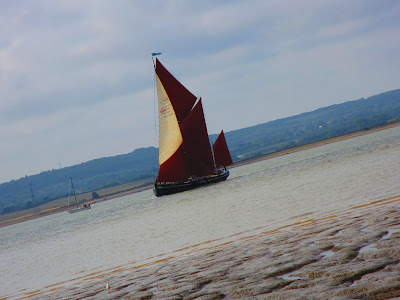 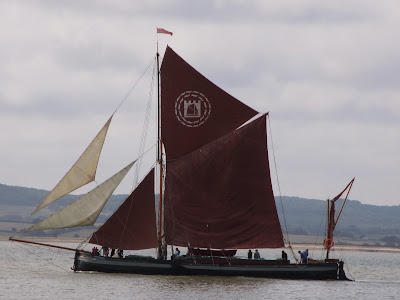 Walking back along the beach afterwards I captured some images of the other morning delights, below are Turnstones, with breakfast on hold until the tide goes out. 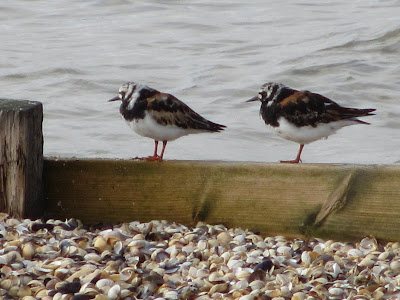 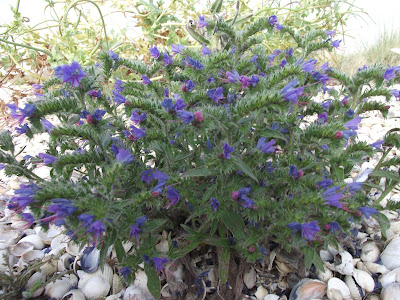 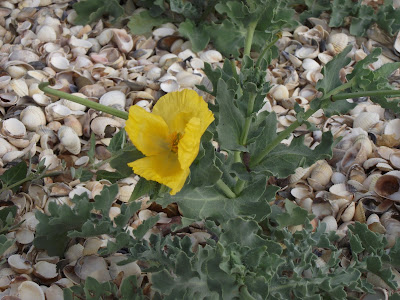 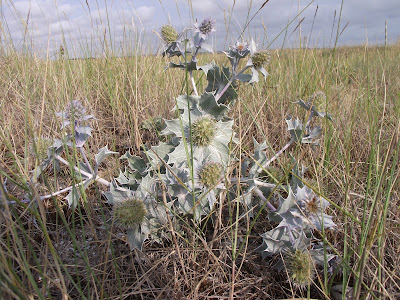 Last week's storms brought some rain to Sheppey but no where near what much of the rest of Kent received and just 24 hrs later it was difficult to see that it had actually rained, just the odd muddy patch here and there. As a result any changes to the bird numbers on the reserve have been negligible, with more disappearing than appearing. Most of the Reed and Sedge Warblers have already left the reed beds and begun heading south and the regular high, over-flying of Whimbrels, indicates that they are doing the same thing. The only real influx of birds has been the Greylag Geese. For the last month they have been inland somewhere but now, right on cue for the imminent start of the wildfowling season, back they have come. At the moment they are spending each day travelling between the reserve (for bathing, drinking and roosting) and the wheat stubble field alongside (for feeding on the spilt grains). Unfortunately this regular and low flight line between the two areas is easily ambushed by duck shooters on the farmland side and it will be interesting on the 1st September to see if that becomes the case.
Oh, and the lone White-fronted Goose with the damaged wing has re-appeared. This bird first appeared on the reserve at the end of February last year, possibly the result of being winged by a wildfowler, disappeared through the summer months and then came back sporadically through last winter. It can't fly and so walks or swims everywhere but still seems to be surviving OK, though where it disappears to on the reserve for such long periods is a bit of a mystery.

Other than that, it's quiet, and I guess the next event will be dawn on the 1st September when the new wildfowling season gets under way on the seaward side of the sea wall in front of the reserve. I intend being there at first light, as I have for near 30 years, to watch events and chat with the wildfowlers afterwards.

Posted by Derek Faulkner at 15:38 No comments:

Early morning today on Harty and the reserve saw one of those visits where it was just such a real privilege to be out and about on such a glorious morning.
At 6.00 this morning the weather was absolutely pristine and breasting the top of Capel Hill the last of the dawn mist was still rising above the length of Capel Fleet. 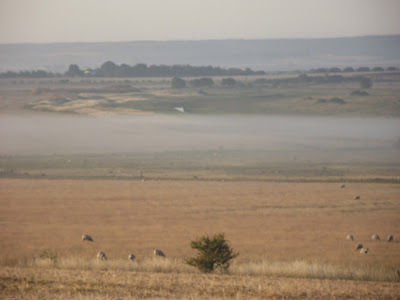 This was the view along Capel Fleet itself. 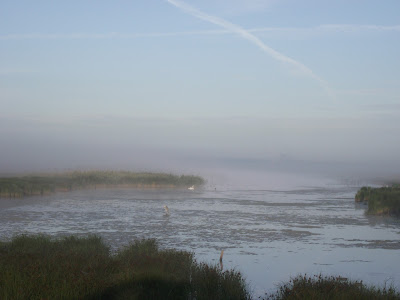 Where this Grey Heron stood on it's daily perch being lit by the early morning sun, with the mist as a backdrop. 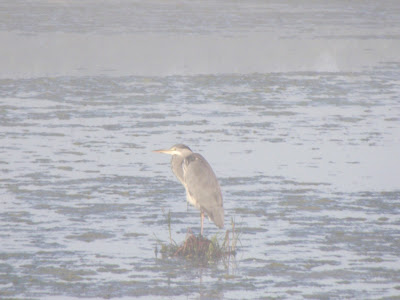 Half a mile along the road, there was no mist and the corn had now been harvested to leave golden stubble, which I imagine has already been re-sown with rape for next year's crop. 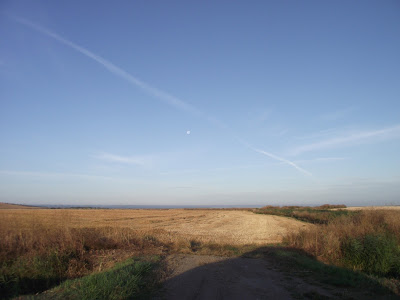 Much of the stubble has been baled and haystacks will now begin to rise up from some of the fields, providing warm winter roosts for the likes of Barn Owls and Kestrels. 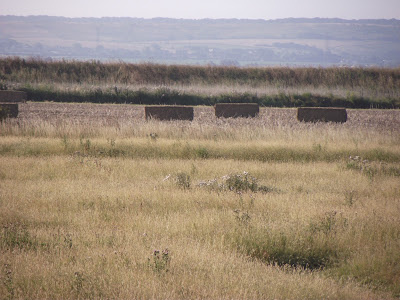 This is not a very good photo but you can just make out the two dots in the sky that were hot air balloons as they drifted along the hills on the mainland. 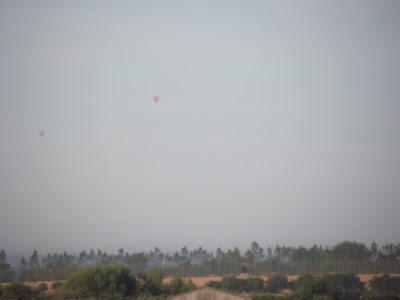 Walking past the reserve's cattle, they at first ignored the dogs and I, but then decided it'd be fun to follow us, so around 50yds behind us we had a line of cattle going back some 100 yds. We had their company for some time before deciding that eating grass was a better option. 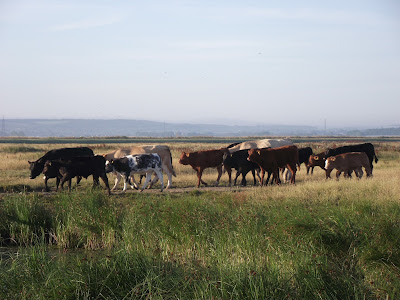 While taking this photo of one of the reserve's better ditches, in order to illustrate how far the water level has dropped.... 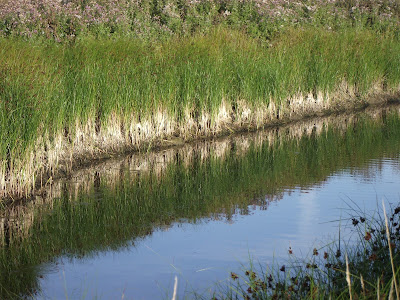 ....I became aware of movement out of the corner of my eye and turned to see this Stoat working it's way along the water's edge and it froze for a moment and watched me. 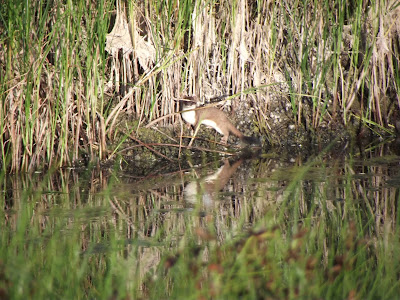 How beautiful stoats are. 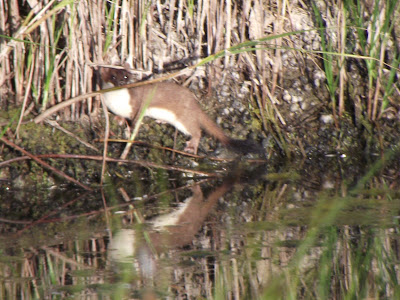 This is the final last drop of water in the large Flood Field, it will be gone by next weekend and that will be it as far as water goes, until very late in the year. 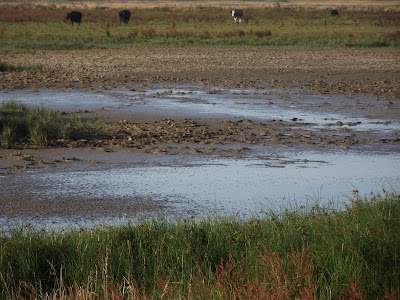 It really was beautifully quiet out there this morning and the only real sound was that of occasional passenger planes as they went across the sky, leaving their vapour trails as the went. 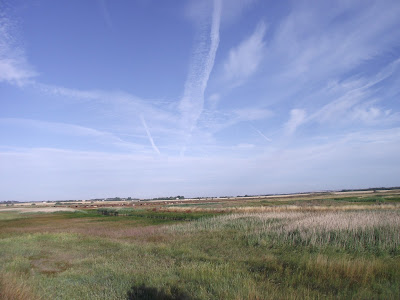 Here you can see how much the Kestrel chick has now grown since my last post and it has been joined by one of it's two siblings. Hopefully the third one is still in the box and will shortly be joining them. 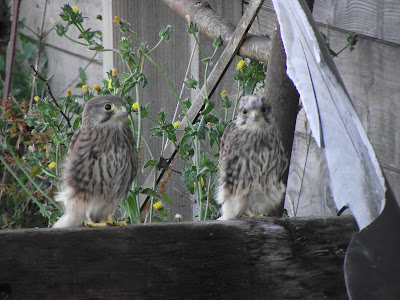 On a more serious note, the persecution of Hen Harriers on grouse moors, while illegal, is still going on and it is clear that those involved with driven grouse shooting are the main culprits. Hen Harriers (a painting of a beautiful male is seen below), urgently need protection from the actions of the moors managements and to advise people of what is going on, Mark Avery has just published a new book on the subject entitled "Inglorious".
I had my reservations about buying it, assuming that it would just be one long "anti" rant about grouse shooting, but it is anything but and I couldn't put it down. It is extremely well written and gives an easy to understand history of grouse shooting, what they do that is wrong, how harrier breeding successes have diminished and the various attempts by numerous groups in recent years to try and get government support for a ban on this form of shooting. It is a book that should be read by both sides of the fence before judgements can be made, and for those that would wish to support the call for a ban, I believe the petition can be found here  https://petition.parliament.uk/petitions/104441 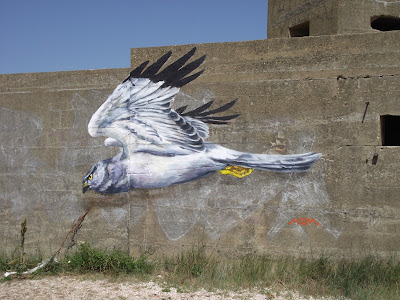