With the wind gusting fron the WNW early this morning I thought I'd have a run down to Shellness Point and perhaps catch a Gannet going by. Because Midge and I don't favour seawatching as a birdwatching past-time, (too much standing around doing nothing), I rarely see them unless they come further into the Swale. An hour or so later, when I arrived at Shellness the wind had moved round to more of a westerly direction which pretty much reduced any chance of oceanic stuff, for at least the time that I was there anyway.
What was also noticeable was the weather, when I was down seven days ago to watch the filming of a scene from Great Expectations, it was swelteringly hot and sunny - today in near gale-force and chilly gusts of wind, I was sheltered behing the blockhouse in a coat - gawd, I know I shouldn't wish my life away, but roll on next March!
But if nothing else it was the height of the tide and so there was at least the daily roost out on the beach at the Point to look through. The photo below shows part of the Oystercatcher flock, which I eventually estimated at around 1,700 birds. (Double click on it and enlarge it and have a look through it) 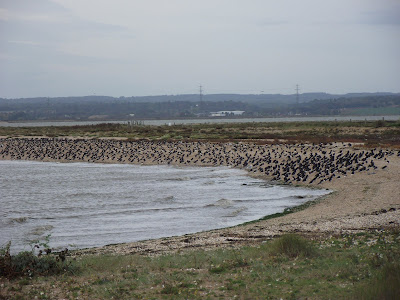 Surprisingly, there weren't that many other waders, just 8 Turnstones and a Barwit. The rest of the roost was made up of 46 Lesser-Black-Backed Gulls, 20 Herring Gulls and 2 Sandwich Terns.
On the sea alongside the beach were 18 Brent Geese, all adults, and despite numerous scans out to sea, that was pretty much it. So, not being one born with much patience for hopping on the spot for long periods of time, I begun to make my way back along the beach. There I had a couple of Wheatears pass by, hunting insects in the vegetation and I was also surprised to see that some of the Vipers Bugloss was still in flower, nice to see a bit of summer hanging on.

Driving back along the Shellness track a female Sparrowhawk overtook me as it sped along the seawall and in and out of the chalets before eventually alighting on a fence post some way in front of me. I stopped the car and had a look at it through the binoculars and was surprised to see a Pied Wagtail sitting two posts further on. This resulted in a short staring match between the two, which I thought was quite brave of the wagtail given how fierce the eyes of the Sparrowhawk can look. Eventually the wagtail lost its nerve and flew off and to my surprise, after one quick pass at it the Sparrowhawk disappeared off in the opposite direction. Perhaps the wagtail had won the war of nerves after all, he's probably out there still, bragging too his mates.

On a different note and for those of you that use the Harty Road Raptor Viewing Mound regularly, a change has taken place close by, immediately to the north of the Mound a large area of the grazing marsh has now been ploughed up. Its a real shame to lose such valuable habitat but its all to do with economics. As I understand it the grazing marsh and its value to wildlife was subsidised by agreements set up with Natural England but with NE having its budgets cut they in turn have had to cut back on the amount of subsidies that they were able to offer each landowner this year. Put simply it means that the farmer there can make more money from growing arable crops next year on the unsubsidised acreage.
Posted by Derek Faulkner at 11:07