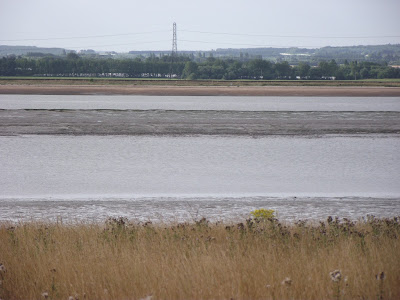 It was low tide in The Swale as I wandered along the banks below Harty Church on the reserve early yesterday morning, a tad grey and gloomy as well. Looking across The Swale to the mainland and the general direction of Faversham, Horse Sands always stand out well, creating a low-tide island several hundred yards long. The main channel of The Swale is behind the Sands but there is still a deepish channel close to the Sheppey shore and although the Sands disappear completely at high tide the top cannot be far below the water, creating a navigational problem for larger boats. The photo below, taken further to the right of the one above, show the Sands as they start to peter out just before Harty Ferry. There were still a couple of old sailing barges moored there yesterday, left over from last weekend's annual sailing barge race and in the background you can see a white van parked on the Harty Ferry slipway alongside Oare nature reserve. 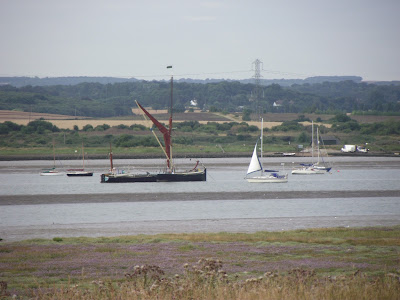 Back in the mid-1980's, when a mixed bag of us locals, reserve workers and farmhands regularly met up most weekends for drinking sessions that often went on well into the night at the Ferry House Inn at Harty, one of us issued a challenge. The challenge was made to the regulars in the Shipwrights Arms, a lovely little pub on the mainland opposite with the quaint address of Hollowshore, nr. Faversham, to play us in a game of football on Horse Sands on Boxing Day. A novel idea in summer but mid-winter - quite daft, but the challenge was accepted and so late morning on the Boxing Day over they came in their fishing boats to collect our less than hardy team. The boats pulled up against the Sands and we all waded ashore with some wives and girlfriends and a few cases of beer, to generally chase a football about in sloppy mud in what turned pretty much into more of a rugby match. The photo below shows me, full stretch in the mud, having just been tripped up by one of the Shipwrights team.
It was cold, muddy and wet but good and genial fun and afterwards, we all went back to the Ferry House Inn, had a rough wash off in the back yard and change of clothes and then were treated to a roast dinner and more beer by the landlords - happy days! 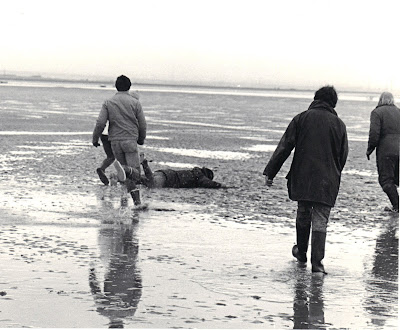 Anyway, back to the reserve and the dozen or so Greylag Geese that remained on the reserve this spring managed to rear around thirty goslings this year and now they are starting to be joined by other greylags from the surrounding Harty farmland. 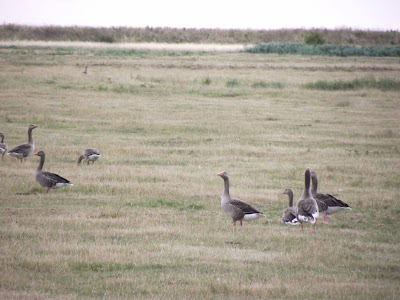 Below, a number of them were flighting past to nearby rape grattens (stubbles). The harvesting is a fortnight or so late this year because of the never ending winter but it won't be long before they will be able to feed up in the wheat grattens as well for masses of spilt corn. Seeing them is a reminder too that the shooting season is only three weeks away, although I've seen no sign of game bird poults being put out on Harty just yet. 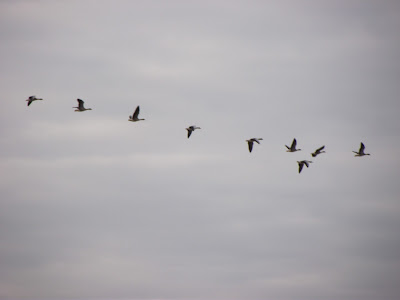 This is something that you don't see mentioned much these days, or indeed see a lot of, bulrushes. We have a couple of ditches on the reserve that still feature them and they bring back memories from younger days. Some people used to cut them and put them in vases as a sort of long-lasting cut flower decoration but they must of done something to them because it never worked out that well in our house. A few weeks or months after my mother had cut them and put them in the front room as a taste of the countryside, the brown seed heads would suddenly explode and fill the room with loads of fluffiness and the vase was left with just a load of sticks in it. 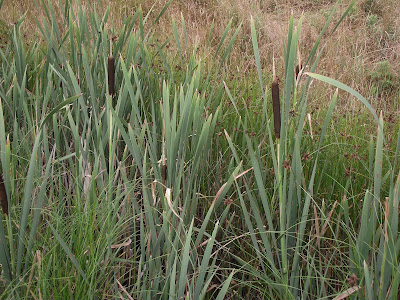 Much more attractive are the flower heads of the Teasel, here with attendant Small Skipper butterflies. These and Ragwort form the main food plants for butterflies and bees on the marsh and are a pleasure to see and of course, in winter the Goldfinches plunder the cones for their seed. 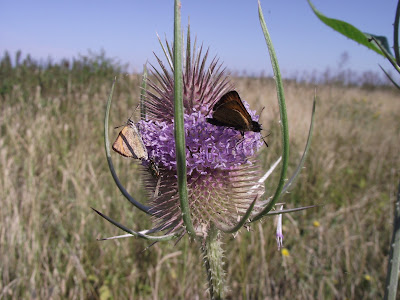 Its that time of year now where most of the countryside is bone dry and yellow and has the tired look of late summer. The wheat fields have yet to be combined and re-sown with rape, the grazing meadows have little in the way of green grass and the fresh-water ditches hardly live up to their name, being shallow, fetid and smelly. Certainly eating and drinking cannot be that pleasurable for the livestock at this time of year, with the lushness of May a distant dream. 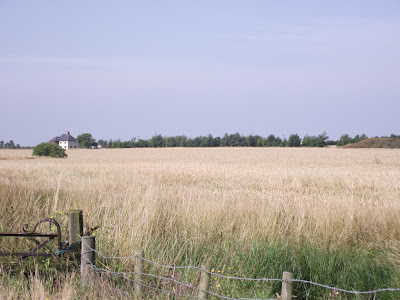