Things are getting better

After Saturday's crap weather, yesterday continued the recent alternating daily weather scenario with it becoming warm and sunny after early frost. I waited an hour for the frost to melt away and then set off to the reserve as usual, thoroughly enjoying the early morning sunshine.
The heap of gypsum shown below in an arable field alongside the Harty Road, was taken under Saturday's heavy skies, not yesterday's clear blue ones and has been there for a couple of years now. This Spring it has been fun to watch it slowly being colonised by the roadside rabbits. There were no rabbit holes in it at all at the turn of the year but now there must be at least 50-60 and no doubt a thriving production line of baby rabbits. 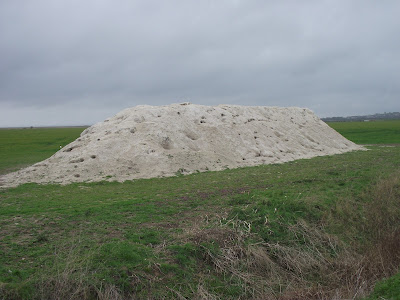 The gypsum is a by-product of a local plasterboard factory and the farmers spread it on their fields because it is a good conditioner of the clay soils which of course dominate Sheppey. Unless the farmer takes early umbrage with the rabbits, it's unlikely that the heap will be flattened until the autumn cultivations begin, but it's likely to be unavoidable carnage once they do.
On another part of Harty yesterday I also came across a guy with a huge video camera and stopping to chat with him, it transpired that he was a cameraman working for the BBC. He was getting shots of particular birds for next months Springwatch, so watch the programme and see what turns up.

I then made my way onto the reserve and made a determined effort to find a Sedge Warbler, feeling sure that I must do in the beautiful weather. The first large patch of reedbeds came up short, all I was getting was bursts of song from wrens and chaffinchs along the hedgerows nearby. I really like the Chaffinch song, it has to be one of my favourite bird songs after that of the Skylark and the Blackbird. The grazier had put another dozen or so cows and their calves out on Friday on a long stretch of rank grass on the reserve below Harty church and several weeks of grazing there will see the grass's old, dead undergrowth cleaned out and new young growth replace it.
So, by then I was on top of the sea wall and had about half a mile of wide reed bed to follow, all the way to the Seawall Hide. Several Pochard and Tufted Duck were in the Fleet alongside and one or two Bearded Tits "pinged" as they sped along the top of the reed stems, but no Sedge Warbler. Occasionally, small brown birds would dart out of the reed beds to the top of the wall and hopes were raised but no, just female Reed Buntings. So it went on until I was almost at the hide and then yes, stop, listen, no doubt about it, the unmistakeable scratchy song of a Sedge Warbler as it rose into the sky from the reed bed. Fantastic!

This morning, early on at least, was another clear and sunny one, though a tad nippy in an Easterly breeze. Driving through the farm spinney onto the reserve, I got off to a good start with a Blackcap singing, what a lovely song. Just as good, on arriving at the reserve barn, was the sight and sound of several pairs of Lapwings going through courtship displays, they too had been woken up at last by the sunny weather. A couple of swallows briefly circled the barn before speeding off again and a Reed Bunting did it's best to be classed as a songster, from the top of a bush. I took the same route as yesterday, following reed beds and hedgerows round to the sea wall. Before going up on to the sea wall I walked over to the track that comes down from Harty Church and stood alongside the line of poplar trees that grow along it. Suddenly I heard the faint but unmistakeable "seep, seep" calls of a Yellow Wagtail. It was only faint so had to be passing over quite high up and I searched the sky with my binoculars, several times while still hearing it. I couldn't spot it at all and then suddenly it called a tad louder and I spotted it - it was sitting just above me at the top of one of the poplars, a nice male.
Apart from two Wheatears, the next best thing was the appearance of the first two broods of newly hatched Greylag Geese goslings in the sea wall fleet. That was all the excitement for this morning but I'm doing well, just need a Reed Warbler and Swift now.