June is upon us

It was very warm and humid on the reserve this warm under milky skies. One of those pleasantly still mornings when the only sounds heard were those of the wildlife and easily the noisiest were the many hundreds of both marsh and edible frogs. Several of these will suddenly start their very loud croaking close by and then like a vocal Mexican wave, frogs from all round the reserve suddenly join in like the aquatic version of an orchestra tuning up. Creep close to the nearest stretch of water and it stops instantly, you might just be lucky and see the odd snout and a pair of eyes watching you from the pond weed.

Many of the reserve's wild flowers are now coming into bloom and one of the tallest is this Milk Thistle. It can reach 3-4 feet high, has variegated foliage, large blooms and long and vicious spines. It is also of course, used as a herb. 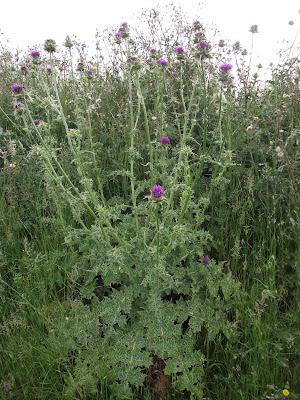 But nothing is as high as this Giant Hogweed, in places it almost forms a hedge along the reserve's boundary. Standing alongside it, it was still around three feet above me. 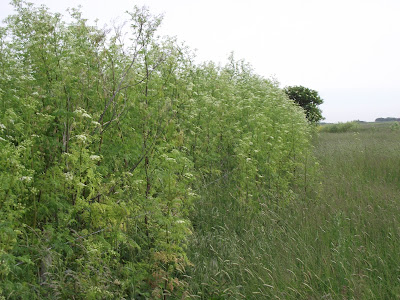 A Surrey blogger this week also mentioned this flower, Grass Vetchling. One comment suggested that it was a ruby among the grass and how true that is, with just the one ruby-coloured flower per stem. It is however, not as conspicuous as this slightly blurred photo suggests, hiding among the taller grass stems of the meadows. 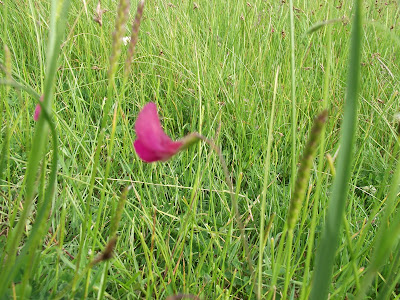 And talking of inconspicuous, this Pink Water Speedwell, is totally that, especially if only tall and gaudy wild flowers rock your boat, which is normally the case. It spreads widely across shallow and stagnant wet areas on the reserve here and with it's tiny pink flowers is easily missed. But I like to champion these unfashionable species, those that can be considered plain and boring, the wallflower of the dance hall, the non orchid. 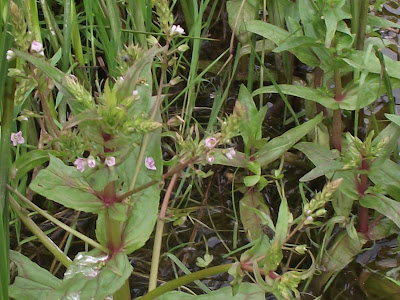 Species such as this Prickly Sow Thistle and why, it has a charm as good as any other wild flower and can be just as photogenic and if nothing else, my canaries love to feed the seed heads to their chicks. 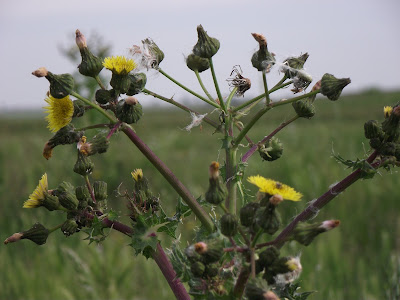 So far this summer, butterflies have been thin on the ground, or across the meadow, whatever. This week however, this year's first Small Heaths and Common Blues have started to appear. I captured this Small Heath this morning and hopefully it will be the first of many, hot, grassy meadows are not the same without butterflies going on their urgent ways across the grass tops. 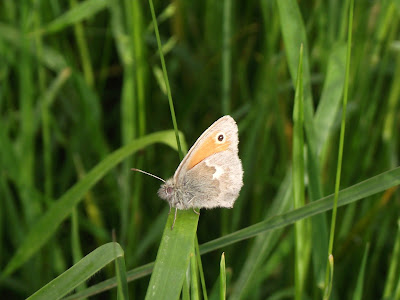 And lastly, on the butterfly front, the first nurseries of Peacock butterfly caterpillars have started to appear on the stinging nettles around the reserve. Oh joy, it was a good walk round this morning. 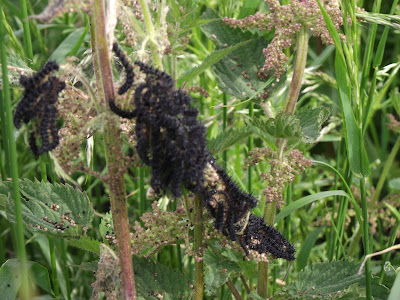