Joy of joys, a day to lift the heart strings, we are having clear blue skies, warming sun and light winds, it could of been early Spring. It was lovely to get up at 5.30 this morning, look out of the back door and see the moon and stars in the sky, rather than rain.
I arrived at the reserve just as the sun was rising from behind some distant clouds on the horizon and the effect that it had on the marsh was amazing, no more grey and gloom, oh no, the reserve looked green and sparkling. OK, it was still wet and muddy but it just felt better and the first bird that I saw, was a female Hen Harrier, gliding over the tops of a nearby reed bed. Ellie and I set off to walk round the whole of the reserve's grazing marsh, watching and listening to Curlews as they came off the arable fields alongside and made their way out to the nearby tidal mudflats, now becoming exposed as the tide ebbed away.
Next on my list were the grazing geese out on the marsh - 70 Greylag Geese (our resident birds) and 17 White-fronted Geese, truly wild birds that breed in the far north of Europe and visit us in the winter. As the winter progresses and especially if cold weather on the Continent gets bad, the flock will normally build up to c. 200-300 birds, they are lovely birds. Yesterday there was a lone Barnacle Goose with them but I couldn't find it today. We carried on through the 40 strong herd of young cows, next year's breeding stock and Ellie and they normally manage to ignore each other. It was then that my spirits really rose, I spotted the male Hen Harrier gliding across the reserve. I knew that there was one about but it had been evading me up till now. Seeing the male bird in flight with it's silvery grey plumage looking almost ghostly is a spectacular sight. 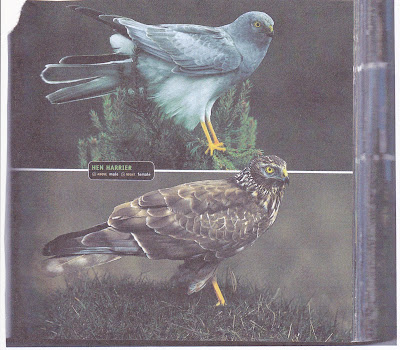 We carried on as the sun became warmer and brighter, Skylarks were springing up from everywhere, some resident, some winter visitors, and one or two even climbed into the sky to sing, now that really did make it seem like Spring! Two Buzzards, mewing like lost kittens, joined the raptor list, while several Herons and a couple of Little Egrets rose from the ditches.
We walked up on to the top of the sea wall and begun to follow that for almost a mile, with the saltings and the tide to the left and all of the reserve's grazing marsh to the right. That stretch of sea wall has on it's landward side, the sea wall fleet, or Delph, thick with tall phragmites reed beds. As we carried on a couple of Bearded Tits "pinged" away with out showing themselves but I did eventually get a count of 22 Reed Buntings along that same stretch. Coming to the end of the sea wall we cut back on to the reserve and followed the reserve boundary ditch the mile back to the barn where I had left the car. On the farmland side of this ditch there is thick line of mostly hawthorn bushes and it is a magnet for smaller birds at this time of year and today was no exception. Feeding on the berries were several dozen Fieldfares, as they have been for a couple of weeks, also there were Linnets, Chaffinches, a few more Reed Buntings and the odd Wren and Robin.
That's been just a few of the birds that I saw today as we wandered round and boy, did the whole walk in that weather make me feel good.
Posted by Derek Faulkner at 12:09