What Month Is It

It is September but to be honest it feels more like October, this whole year has seemed like that, since the hot and sunny April and May we seem to have always been a month or two ahead of the actual month name. It could even be snowing by actual October, its been that kind of year.
Anyway, as a result I've started trimming back and part-tidying up the rear garden - it will go from overgrown and neglected to a tad tidier - overgrown is so much better for the wildlife.

The first job has been to cut out completely the prostrate conifers on the bank behind the pond, as per the before and after photos below. 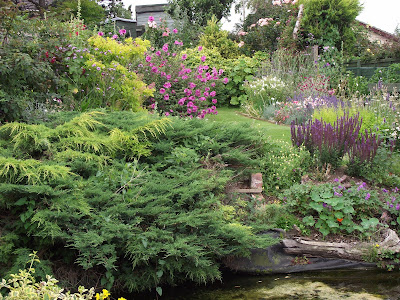 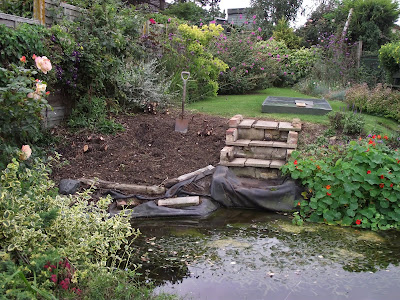 It looked good and now looks rubbish but its only a small garden and I try and grow everything that will benefit bees, butterflies, etc. The bank will be re-planted with flowering herbs such as Golden Marjoram, Thyme, heathers and any other flower that does the right job, the conifers looked good but fed nothing, so they had to go. It might become a bit dis-organised, things might not be all the right heights and things, it might not look like gardens do in gardening magazines, but my ultimate aim and delight is sitting there in summer and seeing the plants covered in insects.

As I write this it's another gloomy, grey and cool afternoon with spits of rain. Nana has just woken up from her old age slumbers and sits at the open door of the conservatory, sniffs the outside air and stays where she is - not the weather for old dogs, she'll just stick her nose out and leave it at that. Midge, after a run of several miles on the reserve this morning, is asleep, tucked up inside a blanket on the "dog's sofa" in the conservatory and there is an imaginary sign on top of her that says "do not disturb until dinner time".

Dylan Thomas in one of his poems said "time ticks a heaven around the stars" and this year is ticking down now unto its end, unfortunately it'll get worse now before it gets better.
Posted by Derek Faulkner at 15:18