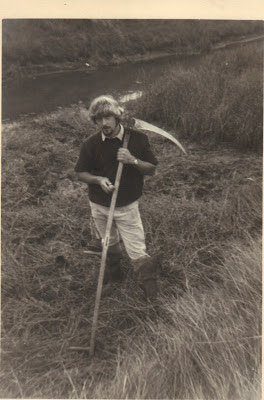 During my time working for the Kent River Authority on Sheppey during 1966-72, a lot of the work was still carried out using traditional methods and the photo above, taken in the summer of 1969 shows one of them. It's a poor quality photograph but shows me, aged 22, scything my way along the main drainage ditch at Warden Bay, near Leysdown on Sheppey. My waders had been turned down and in my right hand I was holding the 9in long carborundum stone which we used every few minutes or so to keep a keen edge on the blade of the scythe. Most of the work was done the hard way and we were probably some of the last gangs to do it in such a labour intensive and un-health and safety way.

Hard as it was, this was my favourite job on the KRA and the one that I considered myself to be best at. We were responsible for two major drainage ditches, one draining part of central Minster for about 2-3 miles across fields and into the sea by the Whitehouse restaurant and a similar length one at Warden Bay. By the time that we normally begun ditching in late summer they were normally well overgrown and the one that we cleaned at Minster, Scrapsgate ditch, would normally only be identified as a dark green stripe running through the fields of grass. There the darker green reeds would have completely filled the ditch to the same height as the top of the ditch banks too effectively strangle any potential floodwater from flowing.

Scrapsgate ditch was a great ditch to clean each year, it began with the long rear gardens of houses running down to it on one side, it then ran through grass meadows, underneath a line of willows and hawthorn, back through some meadows and finally, through a holiday camp and out to sea. Two of us began the scything, one on each side of the ditch and starting at the top of the bank with great swishes of the scythe, we cut our way down to the water's edge. My aim, which I like to think was normally achieved, was to leave the ditch banks looking as well cut as a lawn and after that the reeds and sedge would be cut to just below the surface to leave a free flow of water. Scything, like many countryside skills, was all about having a natural feel for it - a continually sharpened blade, a correct angle of cut and most importantly, wanting to be there doing it. Put me in a pair of waders, a scythe in my hand and I felt like I was successfully carrying on a countryside tradition that had been going on for hundreds of years. I got great karma from that and was proud of what I achieved each year but we were obviously the last to do it, soon after I left the KRA the job was done and still is, by a tractor with an extending arm.
After we had cut a fair length of ditch in this way and raked away the cut grass and reeds, the hard work would begin, we would put down our scythes and turn to long handled ditch rakes. These rakes were a long and strong wooden pole, like an elongated hoe handle but about twelve foot long. At the end were three or four metal tines, curved like claws. These rakes were used by snatching the metal end into the ditch and snagging a clump of reed roots and then pulling it out and swinging it up onto the ditch bank and gradually we opened up the base of the ditch as best as we could. Swinging the weight of a clump of wet and muddy roots round on the end of the pole was extremely hard work and by the end of a day doing this your back, shoulders and wrists felt like they'd been stretched on a medieval rack. But if nothing else it left us with well tanned and muscular bodies and the sense of achievement that you get from a hard day's work, but it was a low paid job, when I left in 1972 I was earning £9 to £12 a week and overnight went into Sheerness Docks on plus £150 a week.
For some of us though, before married life and mortgages increased our financial needs, it was almost enough to simply be working in the countryside and to experience and learn about all the wildlife that you encountered each day. Water Voles were still common then throughout most of the ditch systems, although I doubt that we did their habitat much good in the short term by the removal of their food supply and natural cover. Grass snakes were also seen regularly, swimming across the ditches, there were all the regular waterside birds and flowers to identify and learn about. One day there was even the panic of me pulling out a short object with fins, on the end of my rake, that looked suspiciously like a small bomb of some sort. Needless to say it was gently lowered to the ground and we ran to the nearest phone box to ring the police. The bomb disposal guys arrived a few hours later and it was indeed an unexploded incendiary bomb, nothing too dangerous but not what you want to see on the end of a rake.
Posted by Derek Faulkner at 20:22