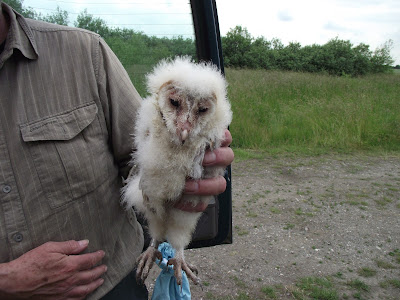 Early afternoon yesterday came the news that a Black-winged Pratincole had been seen on my patch, The Swale NNR and so I popped back out there hoping to double up seeing that, with watching the ringing of four Barn Owl chicks, on the way.
The Barn Owl chicks were still in their downy, pre-feathered stage and not looking all that attractive but it's really could to see all four surviving so well. Hopefully they will go on to fledge successfully this year, last year the three chicks at that site all died while still in the nest but no doubt last year's cold and wet summer must of made hunting for food quite difficult for the parents. 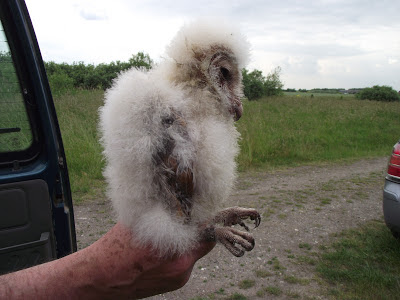 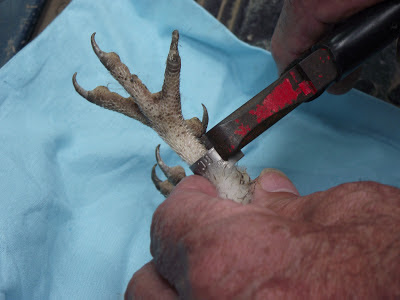 In respect of the pratincole, I could see that some people were in the Seawall Hide with more making their way along the sea wall and so I decided to wander over to there and have a chat with those in the hide. There were three birdwatchers in there when I got there and shortly after a fourth arrived, looking slightly the worse for wear after power walking along the overgrown sea wall on a hot afternoon from Shellness car park. In between gasps for air, he enquired after the pratincole only to be told that it had dropped down at the back of the reserve and wasn't currently visible. Personally I wasn't too bothered, I have seen Oriental Collared, Black-winged and Collared Pratincoles out there in the past so it wasn't going to be anything new for me, I simply enjoyed the friendly chat between the guys there before moving off again. Lo and behold, a few hundred yards further along the sea wall, while talking to a couple of birdwatching friends, the pratincole rose up into the air and briefly flew towards us before departing the reserve in the opposite direction, for inner Harty. With that, most of the birdwatchers decided to make their way back along the sea wall to the car park, where others could still be seen arriving. What fascinated me was the fact that they appeared to speak to the departing birdwatchers as they arrived back and presumably learnt that the bird had moved on, these new arrivals also turned round and went. Why come some distance on a lovely afternoon, to a beautiful spot like Harty and not bother to see what else the reserve has to offer - a strange breed these twitching types.
This fact was emphasised, also yesterday, when a Kent birdwatcher announced on the Kent Ornithological Society Forum that he had room for two others tonight when he was due to make his way up to the Western Isles of Scotland in order to see the White-throated Needletail that had been discovered flying around there. What an incredible and expensive journey to make in the hope that something as mobile as a bird would still be there when you get there. In the event last night, there came the news that the bird had collided with a wind turbine and been found dead - make of it all what you will!

Lastly, we have actually had a few days of summer this week, with warm and sunny weather to be enjoyed, as these Dog Rose flowers testify. 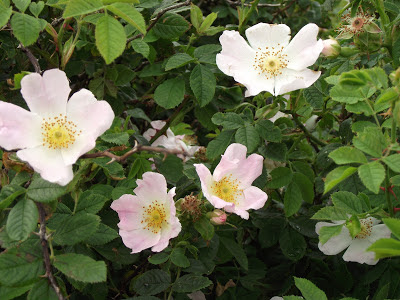