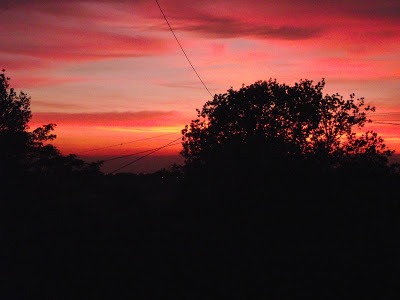 After the lovely hot and sunny recent few days it was somewhat disappointing to walk the marsh this morning in overcast and cooler weather and I could feel that my mood had become a tad depressed as a result. How much happier I was at the weekend being able to experience sunsets such as above, taken on Sunday evening from my front door step. It was taken at around 9.15 and it was much lighter than the photo suggests - how different from the winter when that would of been occurring some five hours earlier - how do people like the winter? 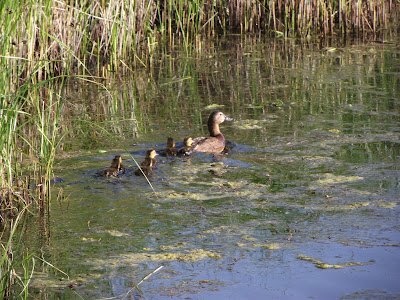 This Pochard brood is the fourth that I have seen on the reserve this summer and is a delightful and very encouraging sight, most of the wildfowl species appear to have had a reasonable breeding season so far. 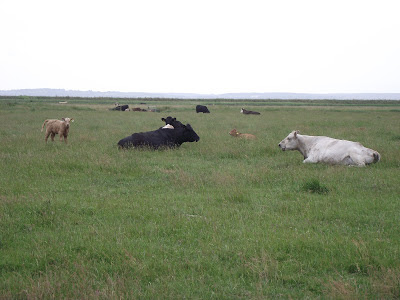 A moderate herd of cows and their calves have been on the reserve  for a while now and last week they were joined by two bulls in order to continue the breeding cycle. It's hard to believe it but the magnificent and powerful specimen below, which I was no more than 20yds from, has already been ousted by the other bull. He looks quite a sad sight spending most of his day well away from both the cows and the other bull, but although he has full access to the cows, the other more dominant bull clearly doesn't do sharing. After a couple of shows of strength and some fierce posturing, the other bull won the day and sent this one away to the other end of the marsh to gaze longingly at what might of been. 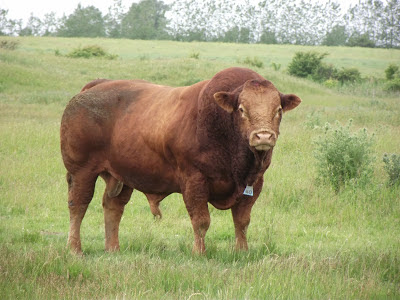 On the whole of the reserve it came as a bit of a surprise to find this small group of poppies growing, not surprising given the marshland habitat and they quite stood out in the never ending green-ness. 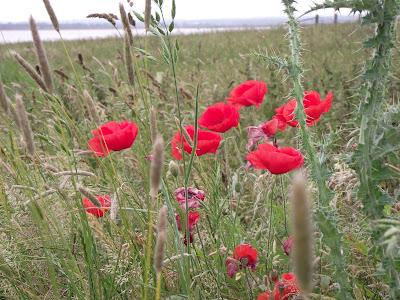 Which is not something that you can say about this very common but not easily noticed Grass Vetchling, with it's 1-2 crimson flowers per stem in among the long grass. 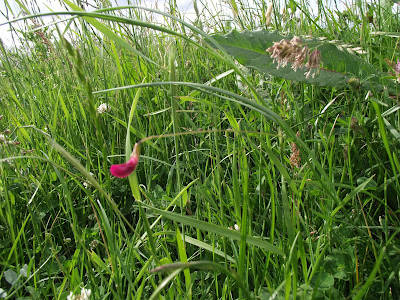 The pale yellow flower stems of Weld are also showing at the moment but once again, this unremarkable flower hardly sets the banks alight with colour. 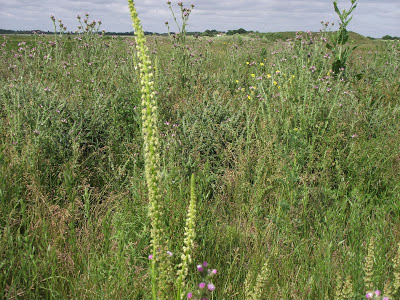 Crossing the grazing marsh, underneath the constant cascade of Skylark song from above, I followed the Delph Fleet for some way, listening also to the constant singing of Reed Warblers and occasional "pinging" of Bearded Tits. Going back to the Skylarks, I estimate that we have around 20 breeding pairs on the reserve this year and hearing them singing almost every day of the year, it's easy to forget that many people don't hear them on their patches anymore. To lay on a sunlit grassy bank in summer and not hear Skylarks singing up above is unthinkable but I guess that some areas have suffered that fate, we're very lucky and I rate the Skylark song very highly.
Also, in the poorly lit photo of the Delph, look at the water marks on the reed stems and how much the water has dropped recently. 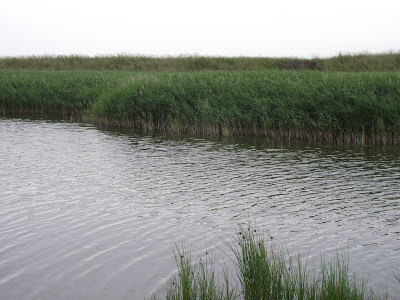 Further to my recent blog wherein I mentioned the number of Burnet Moth chrysalis's in one particular meadow, well I went back this morning and was amazed to find that the number of chrysalis has doubled to several hundreds. Not only that, the months have both begun hatching and breeding as this out of focus photo of two 6-spot Burnets shows. 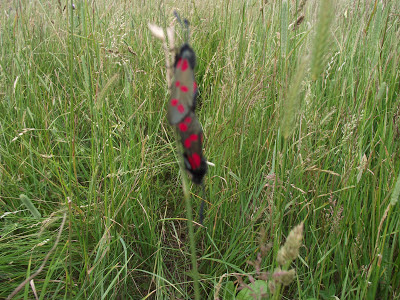 Along one ditch in particular, the bank is dusted white with the numerous flowers of this Marsh Bedstraw. 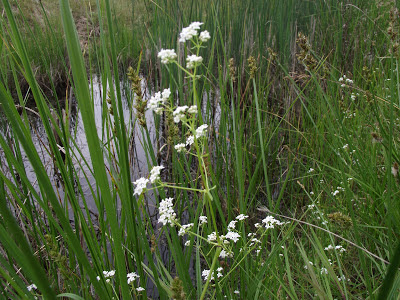 And no, this is not the sea, but a nearby farm field full of the pale blue flowers of linseed. As a result of the very wet and cold winter, several fields had part of their autumn-sown crops either germinate patchily or simply rot away. So once it dried out a tad this Spring the barest areas were re-harrowed and the linseed sown in order to at least get some profit from the fields. It makes a pleasant reflection of the sky on sunny days and spillage should benefit many birds this coming winter. 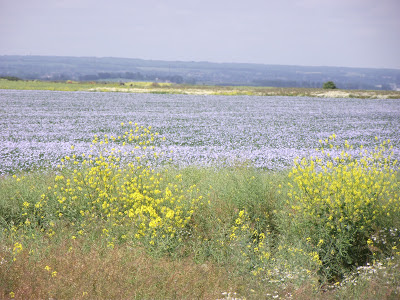 Ellie is very much the live-wire of my two dogs now, with Midge approaching 11 and Ellie just short of 2 and here you see her this morning taking a breather after chasing several rabbits with no particular success. One of the salt-working mounds on the reserve has a reasonably healthy population of rabbits again now (until myxomatosis rears its ugly head soon) and there the rabbits lead her a merry and comical dance. They have many holes on the mound and sit outside them until Ellie almost reaches them and then bob down inside, causing her to chase after the next ones visible. After she has cleared the mound in this way, the rabbits all bob up from their holes again and the whole process begins all over and you can almost imagine the rabbits getting great fun leading her a merry dance, but she does win sometimes.
Midge and I in our senior years, simply sit and watch. 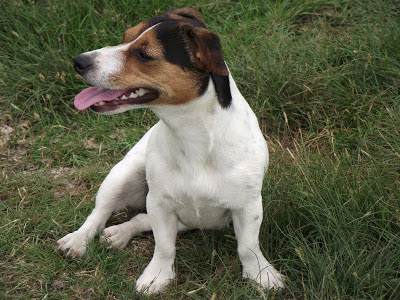 Talking of old age, I reach 66 on Thursday and still marvel that I'm still doing what I do each day. When I was 26 and 36, the age of 66 seemed as far away as the moon and was an age that you just couldn't imagine ever reaching and if you did, well then you'd have a walking stick or wheelchair. Now that I'm actually there, I can still do most of what I've always done, still feel pretty fit and in reality the mid 60's these days are more akin with the mid-50's, thirty odd years ago.
Obviously there are a few changes to your life-style and one will be apparent this November when my friend and I make our umpteenth trip to see Bob Dylan in concert. This year he is at the Royal Albert Hall which brings us full circle as it was there that we saw him for the very first time in 1966. That year however, aged 19, we hitch-hiked both up and back to see him, there'll be none of that this time and likewise in those days, we used to hope that searches on going in to the concert wouldn't find our concealed tins of beer and few cannabis smokes. Nowadays in our advanced years, it's tins of Red Bull and Sanatogen so we don't fall asleep halfway through and binoculars so our poor eyes can see when he's on stage!
Posted by Derek Faulkner at 13:46