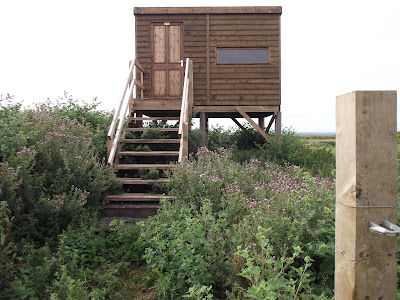 This year on the Swale NNR we seem to be experiencing one of those golden years whereby everything is going right and everything is looking good. It has been achieved by a combination of much better hands-on management and a lot of the right kind of weather at the right time.
We begun the year with a wet winter that flooded up the "Flood Field" in particular, much better than it has done for several years, causing it to become very attractive to large numbers of both wildfowl and waders. In February the erection of two much needed new hides, the Seawall one overlooking the Flood Field and the Tower one to the rear of the reserve, both added to the attraction of visiting the reserve. Although the "never-ending winter", as it became known, continued on its cold and wet way pretty much throughout the Spring, if nothing else it allowed water levels to be maintained for much longer this summer. throughout the marsh. In the Flood Field, breeding conditions were about as ideal as they could be and resulted in it being used by a wide variety of breeding birds but in particular, around 30 pairs of Avocets. Intensive crow and fox controls this year seem to have paid off and we estimate that the Avocets fledged around 40 chicks successfully, if not more. Redshanks and Lapwings have also fledged far higher numbers of chicks than in recent years and wildfowl duckling numbers are also up - the reserve has done well.
And now as we have passed in to some good old traditional, hot and sunny summer weather, I make no apologies for mentioning once again, this year's success story, the return of the Small Tortoiseshell butterfly. The photo of the Tower Hide above, looks ordinary until you are standing alongside the thistles at the foot of the steps on a sunny day like today. It is then that you are surrounded by 50-60 Small Tortoiseshell butterflies feeding on the flowers, joined at the same time by Meadow Browns, Gatekeepers, Small Skippers and some Whites - and what's more, they barely move. Unfortunately my little camera couldn't capture the width of the butterfly numbers but give you some idea of what I was standing alongside. 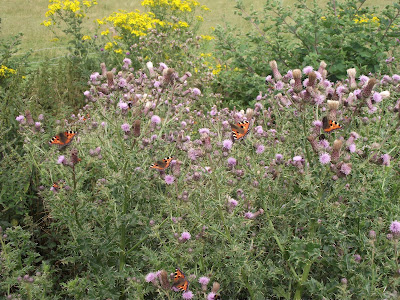 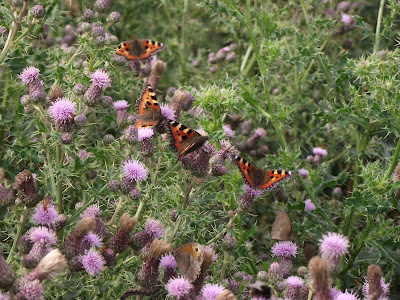 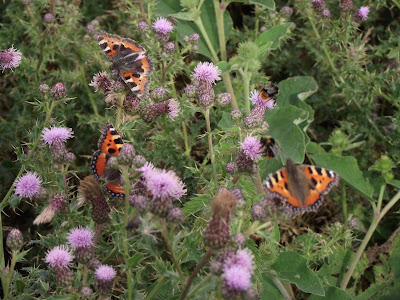 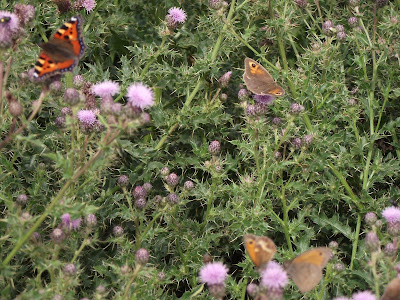 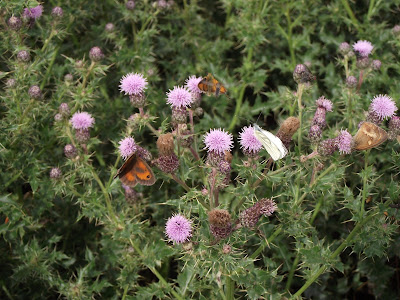 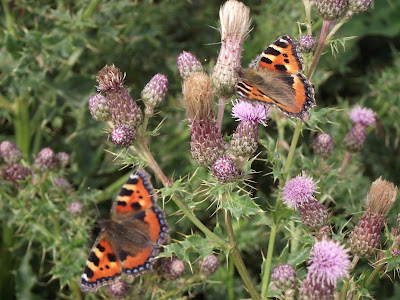 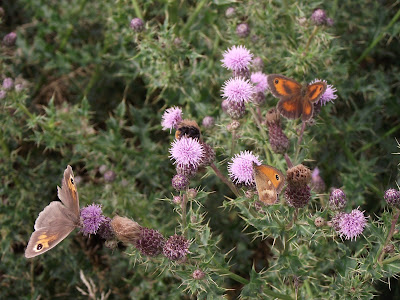 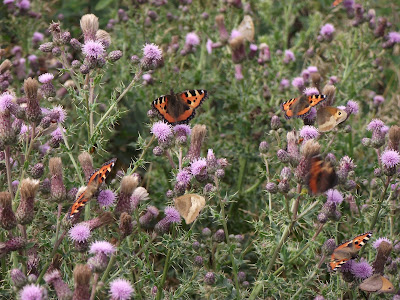 Yesterday whilst walking round to the hide, I counted in total with those at the hide, c.80 Small Tortoiseshells and given that they are seen in good numbers throughout the reserve, there has to be in total some 2-300 Small Tortoiseshells on the reserve. This morning whilst walking round I was disturbing Meadow Browns, Gatekeepers, Small Tortoiseshells, Small/Essex Skippers and Green-veined Whites in such large numbers that it reminded me of how it used to be in my youth. What is a mystery is that these high numbers follow last year's cold wet summer and the "never-ending winter", so where have they all come from? 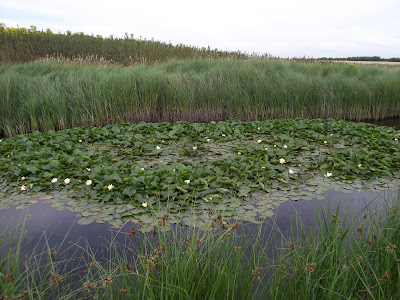 The ditch lilies were also well behind this year because of the weather but have now caught up splendidly. 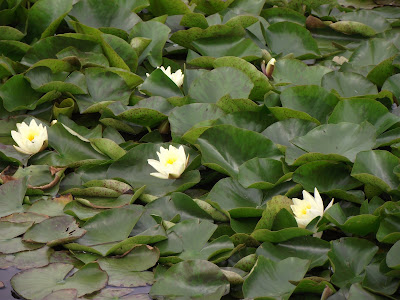 But water levels are now dropping fast and many of the ditches have deeper black mud than surface water, as a hot and bothered Ellie can testify when going in for a drink and cooling swim. The result is a two-tone dog that smells quite badly. 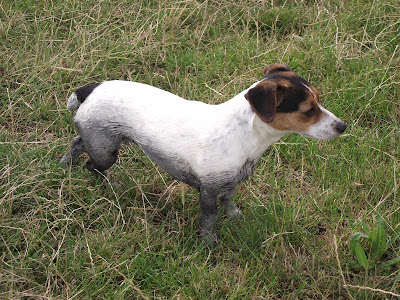 Lastly, the solar panel farm that I featured recently is now nearing completion just outside Eastchurch. This photo was taken from Capel Corner on the Harty Road. The purpleness of the field is not flax or something growing, it is several thousand solar panels all facing south across Harty marshes. It's a huge acreage used up but to be honest, if we must have green energy then these look far less ugly and intrusive than wind turbines that can be seen for miles around. 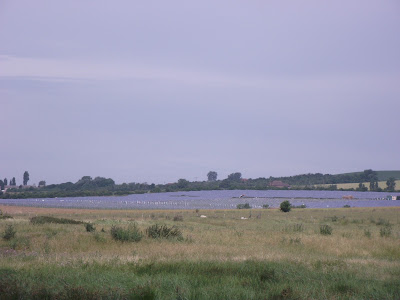 This is what they look like when you get much closer. 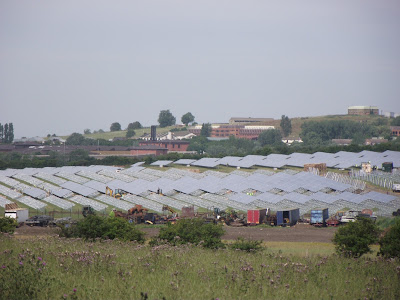