Impressions and Images - things that helped me thru life.

High summer, it's hot and it's dry and it's a struggle to find something new to say about the reserve that I ain't said before and I got to thinking about impressions - people or things that have left deep impressions on me and were the constant shadows along the paths that I have taken through life.

Born in 1947 I spent most of my childhood growing up through the 1950's and in those early post-war years on Sheppey, with only the radio or library books to garner impressions from, books easily won the day and I have never stopped reading them to this day.
The two stand out candidates in those short-trousered, plimsolled and brylcreamed hair, childhood days, were Enid Blyton's Famous Five books and Kenneth Graham's Wind in the Willows. The continuing adventures of the Famous Five so easily captured the imagination of a child from a poor background and the back-streets and alleys of Sheerness. Those stories described so well the kind of climate that I was living in through the 1950's, where was fun achieved from simple pursuits and pleasures. When a tent, some sandwiches, a bottle of ginger beer and the countryside was all that one needed in order to have fun and adventure. The books encouraged me to escape out from the streets and alleys and to cross the Canal that bordered Sheerness and explore the marshes and fields of the big, wide world on the other side. After I retired I revisited the one Famous Five book that I owned and set about sourcing and buying all twenty-one of the adventures, as you see below. 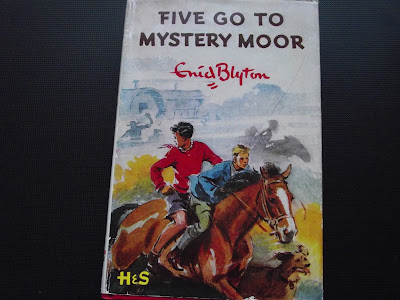 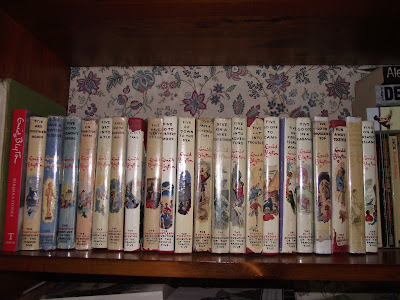 Around the same time that I was reading the Famous Five books I also discovered the book that has pretty much stayed with me all of my life, a book that I still regularly dip into each year - The Wind in the Willows. Even today I can still get lost in the feelings that certain passages in that book provoke and readily identify with some of the experiences that Kenneth Graham describes. Like the Famous Five books it has the power to draw out the nostalgia in me and transport me back to an age of youth and innocence and also like the Famous Five books it encouraged me out into the countryside. We never had The Riverbank or the Wild Wood nearby but with a large dollop of a young child's imagination, ditches and hedgerows were capable substitutes.

When I was twelve at the end of the 1950's, we moved to a council house and had electricity for the first time and because of that were able to have and old black and white television. The television impressed me greatly and for the first time I was able to see wildlife how it actually was and not simply how I imagined it to be from reading books. As a result Peter Scott came into my life through the Look nature programmes that ran for countless years on BBC and after reading his 1961 autobiography "Eye of the Wind" he became my first hero and the countryside my natural home.

I was fortunate enough to become a teenager just as the 1960's unfolded and to experience the way that life and lifestyles changed just as dramatically as they probably did after the First World War. Just as the 1950's had illustrated my childhood, the 60's became the benchmark that I forever compared  the rest of my life against. It and events, changed so fast that many people and things impressed themselves upon me but two stand out and have stood the test of time until the present day. In 1964 I was introduced to and impressed by, the early music of Bob Dylan and through his adopted name, the Welsh poet Dylan Thomas. Whilst listening to Bob Dylan I also began to read whatever I could about the life of Dylan Thomas (below) and became somewhat entranced by him and his ability to paint pictures with the written word. In real life I would probably have disliked him because he was an oft drunken slob that always owed money, stole from his friends and lied greatly but reading about his life and that of his wife Caitlin, I became entranced. I can't say that I like all of his poetry but those that I do are very good, as is Under Milk Wood and hearing him narrate A Child's Christmas in Wales is the finest thing I've ever heard. As a result and throughout my life, I have been inspired to write countless, mostly poor poems and other things, if nothing else getting great enjoyment from simply writing. 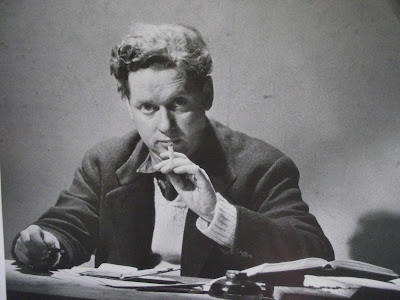 And so, while Dylan Thomas had died in 1953, Bob Dylan was there in my teenage years and even today is still there as probably my last real idol. He left a lasting impression on me by his ability to mix the visionary of William Blake with the word pictures style of Dylan Thomas and set it to really great music, or so I think.

In recent years I have become fascinated by the Bloomsbury Set in the 1920's and 30's and read much about the likes of Carrington, Lytton Strachey, Frances Partridge and Vanessa Bell. They shared a life-style that I can identify with.
Posted by Derek Faulkner at 15:29