After last Friday's 16 hour monsoon and then more rain yesterday, I was hoping to see a decrease in the dry conditions on the reserve when I visited there this morning. Well there was quite a bit of mud and some puddles along the paths and even a few puddles in some of the rills that weren't there before, but we're still a long way from having expanses of water attractive to ducks and waders. 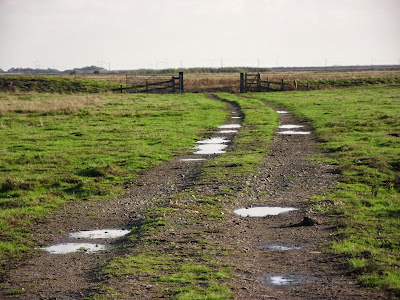 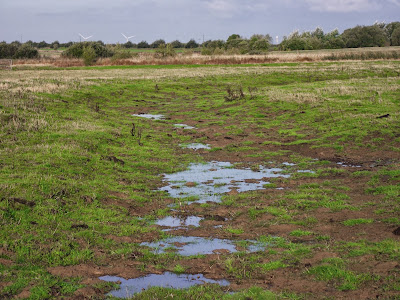 However, having said all that, the large splash in the "Flood Field" had miraculously achieved a shallow covering of water over 75% of its width. The photo makes it look far better than it actually was, it's only an inch or two deep, but it's an encouraging start. 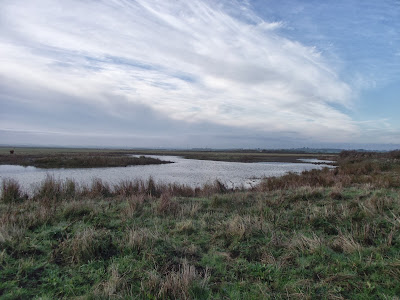 There are two arable fields along the Harty Road, not far past Capel Corner, that habitually have large splashes of water on their surfaces in wet winters, last winter was particularly bad and a lot of the young rape  plants simply rotted in them. Presumably in order to try and prevent this happening in future the landowner is currently deepening the ditches surrounding the fields and attempting to lay mole-drain piping across them, but I still feel that he is missing the point and wasting his money.
Now I'm no agricultural expert but I can't see how digging the ditches much deeper is going to prevent the water from laying on the surface, it's sitting there because after many years of non-ploughing and compaction from heavy plant a hard, compacted crust has formed making it almost impermeable. Even in gardens, anybody who works clay soil knows that it soil particles stick to each other like glue and that it regularly needs to be deep dug and exposed to the elements. I feel sure that if the farmer there was to actually plough the fields every 2-3 years and break up that crust, then the water would drain away far easier and he would avoid having to do what he is now is.

I was surprised to see the main headline of The Telegraph today boldly stating "Fox-hunting ban to be relaxed". Well as readers of this blog will know, people like myself, who visit Harty most days, have never seen any evidence that a hunting ban was actually in force anyway. The Hunt still visit on a regular basis, normally fox-hunting in the traditional way and we also get occasional visits from a Beagle pack that pursues the hares. Personally, I think that traditional fox-hunting still goes on a lot more than people think around the country and that the hunts simply make out that their really aggrieved by the "ban" just to pull the wool over the anti's eyes and to make them smugly feel that they've won some kind of victory. In that way every body's happy.
Despite my support for most traditional country ways and the fact that both the huntsmen and women and their hounds make a very picturesque sight in full flow, I don't buy into their usual claim that they are an effective form of fox control, I prefer and support other methods. Farmers in today's article (possibly hunt supporters) were claiming that a lot of lambs were lost last winter to hungry foxes and that they badly need the hunts back to control them, one reason for the potential easing of the ban apparently. Now the hunt may kill the odd fox or two during a day's hunting but the unnecessary disturbance that they can create to other wildlife during the course of it can be quite great. I watched the hunt on Harty a few weeks ago, working the pack of hounds through the wide reed beds of Capel Fleet and out were flying Marsh Harriers, Coots, Snipe and assorted ducks.
Send a guy in a 4x4 with long range spotlights and a high-powered rifle out at night onto farmland and he will almost certainly cull just as many foxes, or more, instantly and with the minimum of disturbance. That is serious and sensible fox controls by quiet and modest guys who are rarely seen and who don't need to gallop about noisily in a red coat to prove a point.

And finally, Midge the older dog seems convinced that there's something still down that hole but Ellie seems to be saying "nah, it looks better over there". 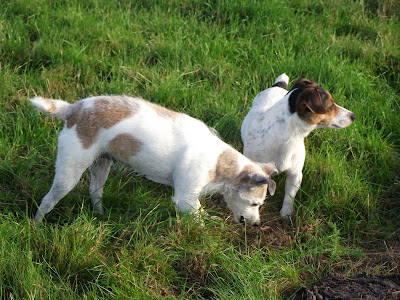