The gate pictured below is one along the reserve boundary, nothing special about it except that it used to be part of the Sheppey Light Railway line years ago.
It apparently came from Harty Halt, a small, short platform station, with a small hut as it's Waiting Room, that was situated just before the Harty Road turn off along the Leysdown Road. 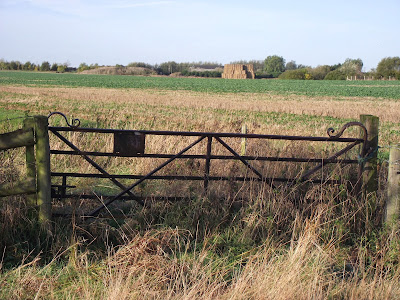 All that remains to indicate where the station used to be is this short line of hedgerow running into the wheat field just before you turn off onto the Harty Road. You can see the direction that the railway line took by following the line of telegraph poles that make their way across the field back towards the now Eastchurch Prison, the poles closely followed the railway line for much of it's route across Sheppey. 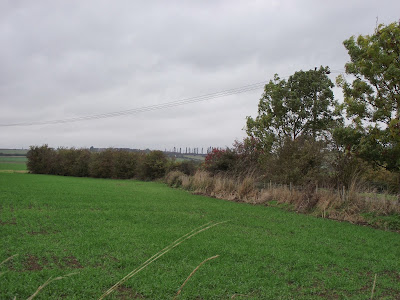 Below, you can see another one of these identical railway gates, this time a few hundred yards past what would of been the Sheerness East station. It is still in it's original position along the road that leads to the Sheerness Golf Club and was a crossing point on the line between Danley Farm and Danley marshes below the golf club. The old bed of the railway line is immediately behind the gate and the crossing would probably of been used to move livestock between the farm and the marshes.
The Sheppey Light Railway closed in 1950 when I was just three years old, but apart from removing the tracks and sleepers the line was left as it always had been with its bed of stone chippings and fences and hedgerows. For the next ten years or so, as the line gradually began to re-colonise with all manner of wild flowers and shrubbery, it became quite a mecca for us youngsters who were interested in wildlife and were always out and about doing such things as collecting birds eggs. The section between the Scrapsgate Road in Minster and the Halfway Road is very overgrown these days but is still used as an unofficial shortcut to Sheerness, as it always has been, by those locals who know of it. 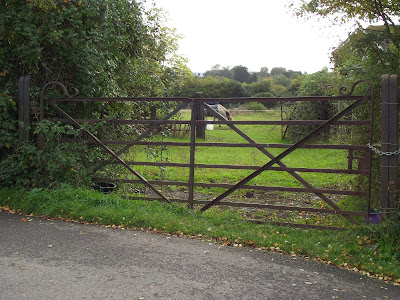 On the Harty Road, at Capel Farm this week, the rams have been put out to enjoy their brief annual sojourn with the ewes. Below you can see one of the rams in the middle of the flock with the harness round him that holds the coloured marker crayon in place on his lower chest so that each ewe that has been "served" can be identified. If rams have such a thing as pride it must be quite nice to look round the ever increasing number of coloured backsides and think, "mmm, not bad for an old ram".
Normally, after a week or so, the farmer will change the colour of the crayon so that he can see which sheep will start lambing first and gauge the expected lambing dates of the sheep. The traditional date that sheep farmers normally introduce the rams has always been November 5th but possibly this farmer has an eye on having the lambs ready for the spring market a tad earlier and perhaps having a better chance of a good price. Certainly, after some poor lamb sale years, this last two years have seen prices holding up very well and its surprising that this appears to be the last remaining serious flock of sheep on the whole of Sheppey, cattle have completely taken over as the livestock of choice. 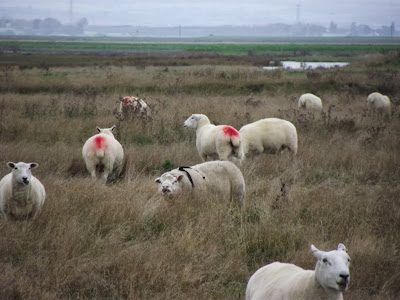