It was a green and pleasant land. 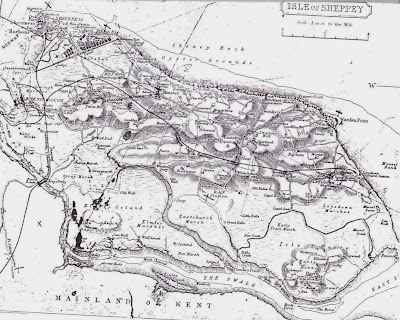 Once apon a time, before Sheppey's countryside became covered in huge housing estates, caravan parks and green energy farms, it was a green and pleasant land. I suppose it still is if you visit from some of the poorer areas of London but as somone who has lived here all of his 66 years the loss of countryside has been immense.
Countless small farms were still to be found and sheep were the predominant livestock, there were still pleasant and narrow lanes to be walked and perhaps, to some people's surprise, there were market gardens and many small orchards. One such pear orchard was still to be found along the Harty Road as recently as the 1970's, it stood alongside the last bend on the road before you turn to take the last few hundred yards drive down to the Ferry House Inn. Prior to that and close by, there had also been another small orchard between the church and Park Farm out there. It ran right down to the edge of the saltings alongside the Swale and it's site now, is still surrounded by the tall hedging that always was there to shelter the trees from the cold winds. Orchard Close along the Minster Road, is a small cul-de-sac that as it name implies, was built on the site of an old orchard.

Walking was another feature of my childhood, very few families that I knew had cars. When my father and I visited my grandparents in the Halfway, we always walked from Sheerness, we had neither a car or the bus fare. Likewise when my mother took us blackberrying in Minster, it was reached by a long walk along the sea front. The beauty of all that though was that you absorbed and stored away all manner of wildlife sightings and memories of the open countryside as you grew up, because of that it is now possible to make comparisons with how it once was and nowadays. The only comparisons that the youth of today will be able to make are between the insides of the various cars that their parents drove them around in.

I acquired my first bicycle when I was around 10 or 11, an old bone-shaker left by my uncle when he died. It was an embarrassment to be seen on and no match against my friends' posh Raleighs, but if nothing else it gave me the opportunity to get to Minster that much easier. Minster was an absolute paradise of open fields and hedgerows in those days, everything a young lad interested in collecting butterflies and bird's eggs, etc. would be interested in and I would have given my right arm to live there. One of my favourite walks then was that along the length of Oak Lane, a very narrow and quaint lane that must of been still unchanged from a hundred years before. It was bordered and boxed in by tall elm trees and hedgerows that made the lane seem even narrower and behind the hedgerows there were great meadows that ran for miles and down to the edge of the cliffs. Ah yes, and at the end of the lane, it abruptly ended at the cliff edge, indeed regularly collapsed down it, the great high cliffs that looked out into the Thames Estuary and the remains of the ex-WW2 Boom Defence running out into the sea. The cliffs that were very dangerous and where we were warned not to go to but we did because that made them more exciting. Large spinneys of silver birch, willow and morello cherry that had once grown along the cliff's edge before slipping downwards with erosion now blanketed the various levels of the cliff's downward track. In the sheer, sandy face of the topmost part of the cliffs Sand Martins nested in short tunnels that they dug into the soil each year on their return from wintering in South Africa.
Standing on the top of the cliffs as a youngster the challenge and excitement in trying to find a way down these cliffs to the beach below was irresistible and probably still is today, given the rescues that still take place. The first challenge was to get around and down past the sheer face at parts of the top of the cliff, sometimes we did it very dangerously by absailing down on old bits of rope that we found. Sometimes where the drop wasn't quite so sheer there were secret paths down that weren't quite as dangerous to fleet-footed youngsters. Below the sheer face of the cliff the surface then gradually tumbled down to the sea through all kinds of levels and hazards. There were the thickets, overgrown grassy areas and wet areas fed by springs from above and worst of all, the quicksand bogs that caught out most first-time youngster to the area. Stepping into these meant that the very least that happened was that you eventually struggled out without wellies if you was wearing them, the worst and most frequent incident saw you getting stuck up to your waist and needing to be rescued by the police or coastguards. I was lucky, my one time getting stuck there as a 12 yr old only saw me lose my wellies, although re-climbing the cliffs in bare feet wasn't that pleasant.

Most children of today aren't allowed to, or even want to, have such adventures but back then, in that green and pleasant land, it was our idea of fun, it was how we learnt about life - would love to do it all again.
Posted by Derek Faulkner at 16:45