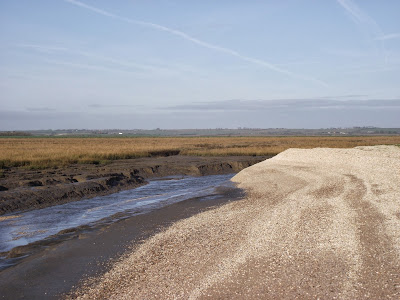 With the daily walk round the main marsh part of the reserve becoming both a tad boring due to a general lack of birds and mucky lately due to a combination of wet weather, mud and cows hoof prints, I decided to drive down to Shellness Hamlet earlier this morning. I was hoping to catch up with a flock of 15 Snow Buntings that had been seen on the beach at the Point there over the weekend and with Shellness Point being part of The Swale NNR it meant that I wasn't also going off patch.
Despite being in their winter plumage these winter visitors to Kent still remain an attractive and fairly approachable bird to go and see as they seek out seeds among the vegetation along the shell beach. I thought that I was going to be unsuccessful when I couldn't immediately find them but eventually they flew in over my head with those lovely, almost budgie sounding calls that they have, and landed not far in front of me, although I only counted twelve birds. Although you can't see them in the photo above, they were on the very last stretch of beach to the right of the Point, where the gulley seperates the Point from the long expanse of saltings.
Turning immediately to my left from the photo above, I took the photo below, looking out into The Swale and with the beach of the Point running round the corner. Although it was 9.30 on a very bright and sunny morning, the low height of the sun made it look as though it was early evening. 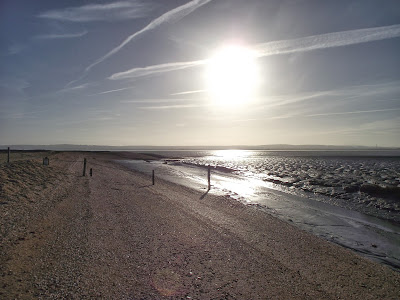 And once again, turning to the view behind me, I took this photo below looking back towards Shellness Hamlet itself. The line of posts marks the roped off section of the Shellbeach, important to protect against disturbance to both nesting birds and daily hide tide roosts. 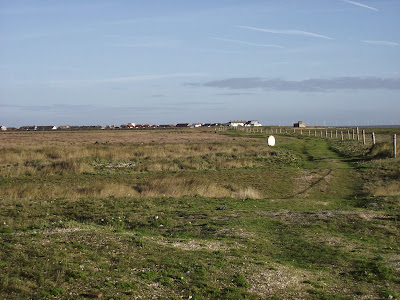 And lastly, from the old concrete look-out post, I took the one below, looking back southwards along the beach to the Point. Along that stretch the beach has built up considerably again, with erosion and re-builds being a regular feature throughout the year as high tides and gales come and go. Likewise, it was notable how much of the soft, food rich mud of the mudflats had also disappeared to leave large slabs of the hard, base clay showing. Whether this was simply the natural result of strong tides or the actions of the regular visits from mussel dredgers close by, it's hard to know but numbers of some wader species, such as Oystercatcher and Dunlin, have been falling there in recent years. However, having said that, one species appears to be currently increasing in number, the Sanderling and I counted c.200 spread out across the mudflats this morning. 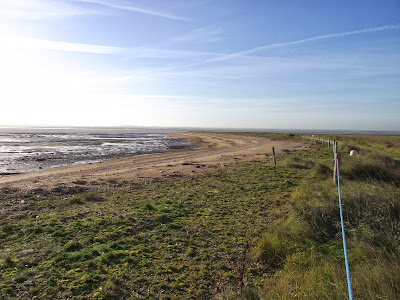 Walking back, I bumped into just one other birdwatcher, Mike Gould, who regularly watches his local patch in the Seasalter area. It was ironic that he'd probably had to drive around thirty odd miles to stand opposite Seasalter, just three miles or so, visible directly opposite Shellness across The Swale. Lastly, as I drove back along the Shellness track, I has a Great Skua fly in off the sea just ahead of me, which then carried on across the marshes before re-joining The Swale further on towards Oare.
I didn't see an awful lot but it was a lovely cold and sunny morning and it was enjoyable for a change being briefly away from the mud and the water of the marsh.
Posted by Derek Faulkner at 15:10