Perambulations of The Swale

There was an increasing E wind blowing this morning that brought in alternating weather types. Mostly there was distant sea mist, low cloud and coolness but occasionally there were brief bursts of sunshine and warmth.
The good news is that at last we have good numbers of avian summer visitors arriving on the reserve and I heard the first of those as I parked at the reserve barn - a Cuckoo. In all as I perambulated round, I recorded a total of 14 Sedge Warbler, 6 Reed Warbler, 2 Yellow Wagtail, 2 Whitethroats and numerous Swallows.
After leaving the barn my first visit was to a nearby Coot's nest that I photographed a week ago with several eggs........... 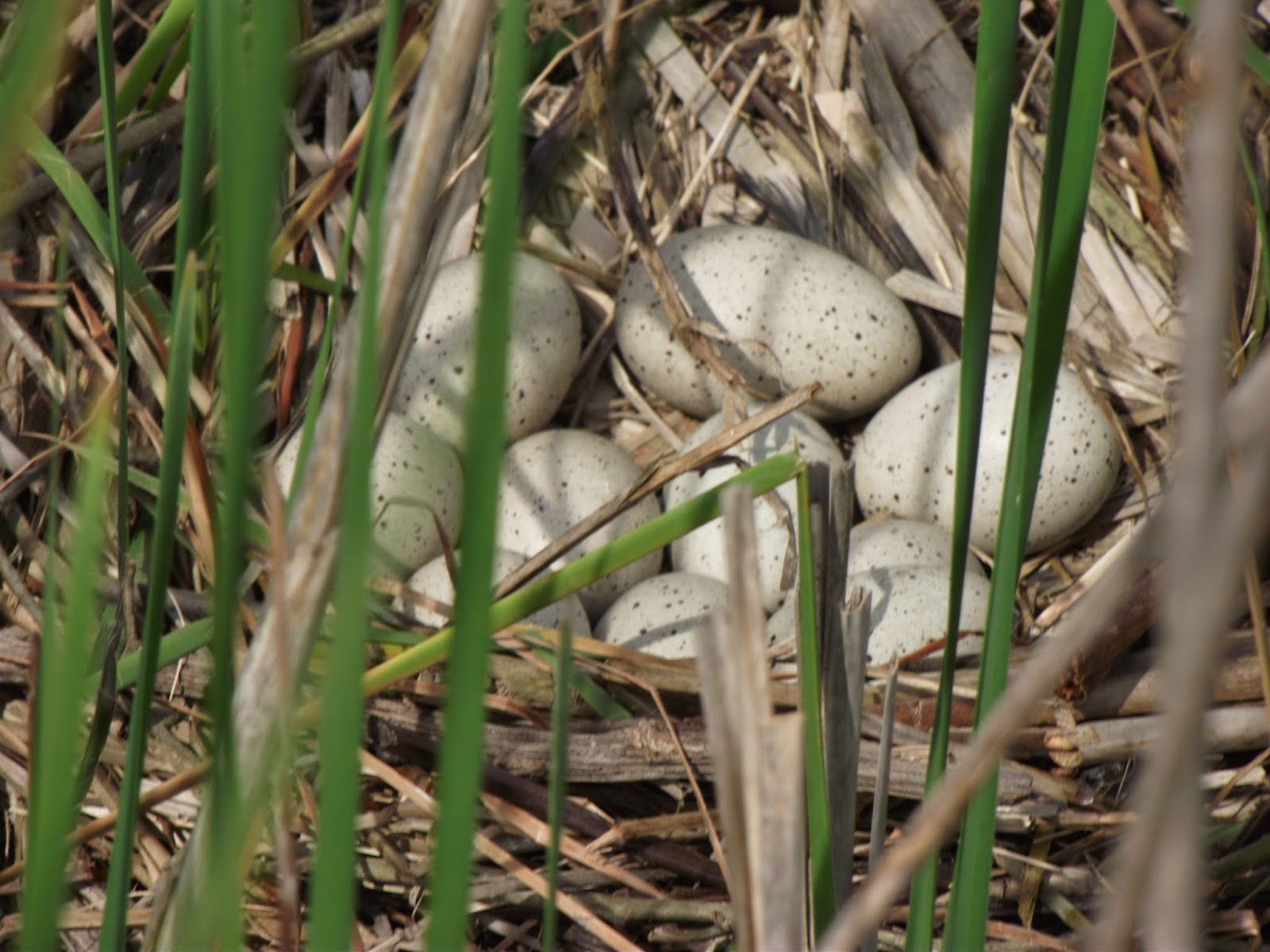 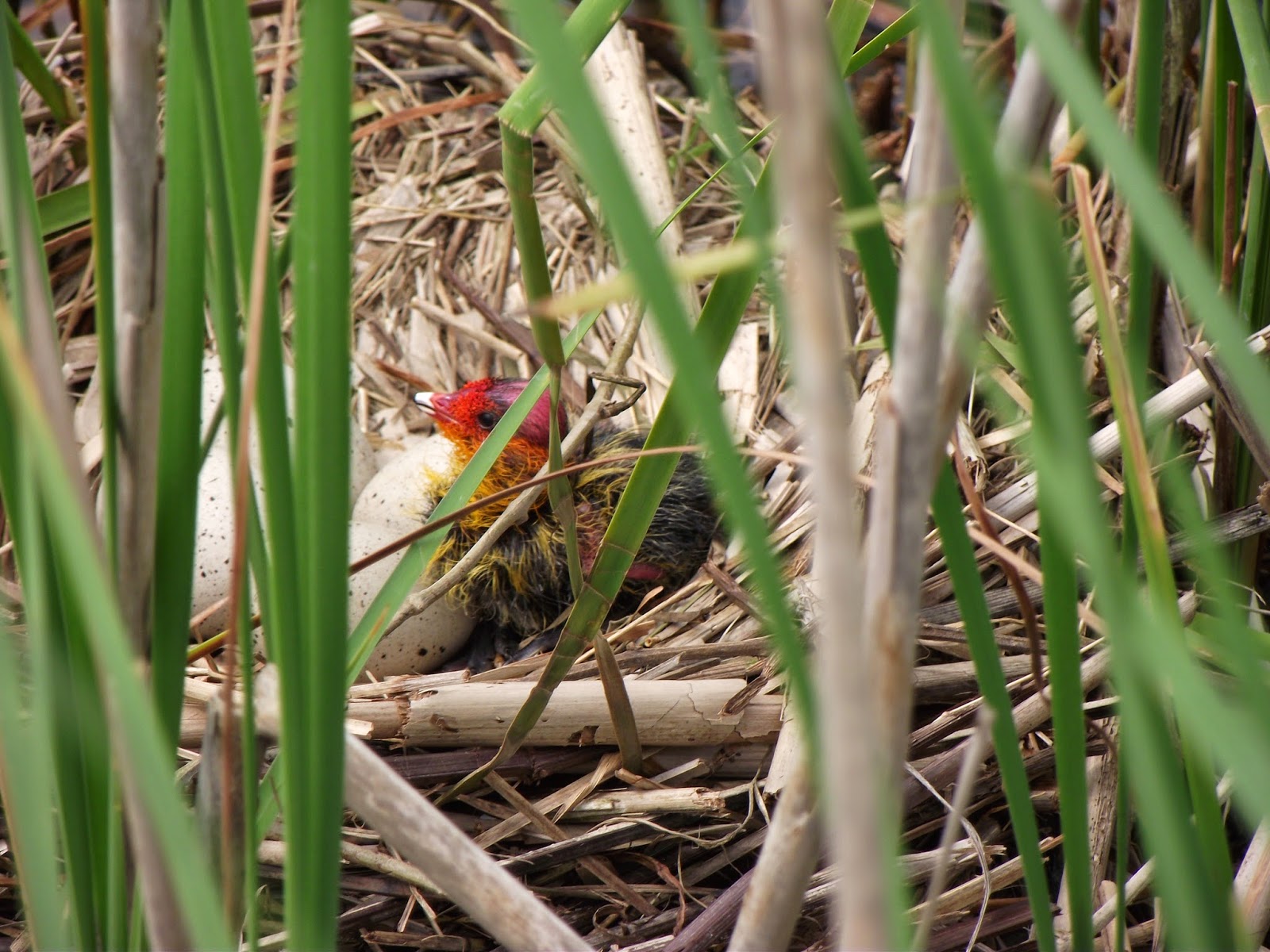 Several hundred yards round the marsh and the joy became short-lived, the Coot's nest in these reeds was empty, with several eggs on the bank alongside, pecked open. I guess we can credit this piece of non-breeding to crows and those who can find no reason for them being culled. 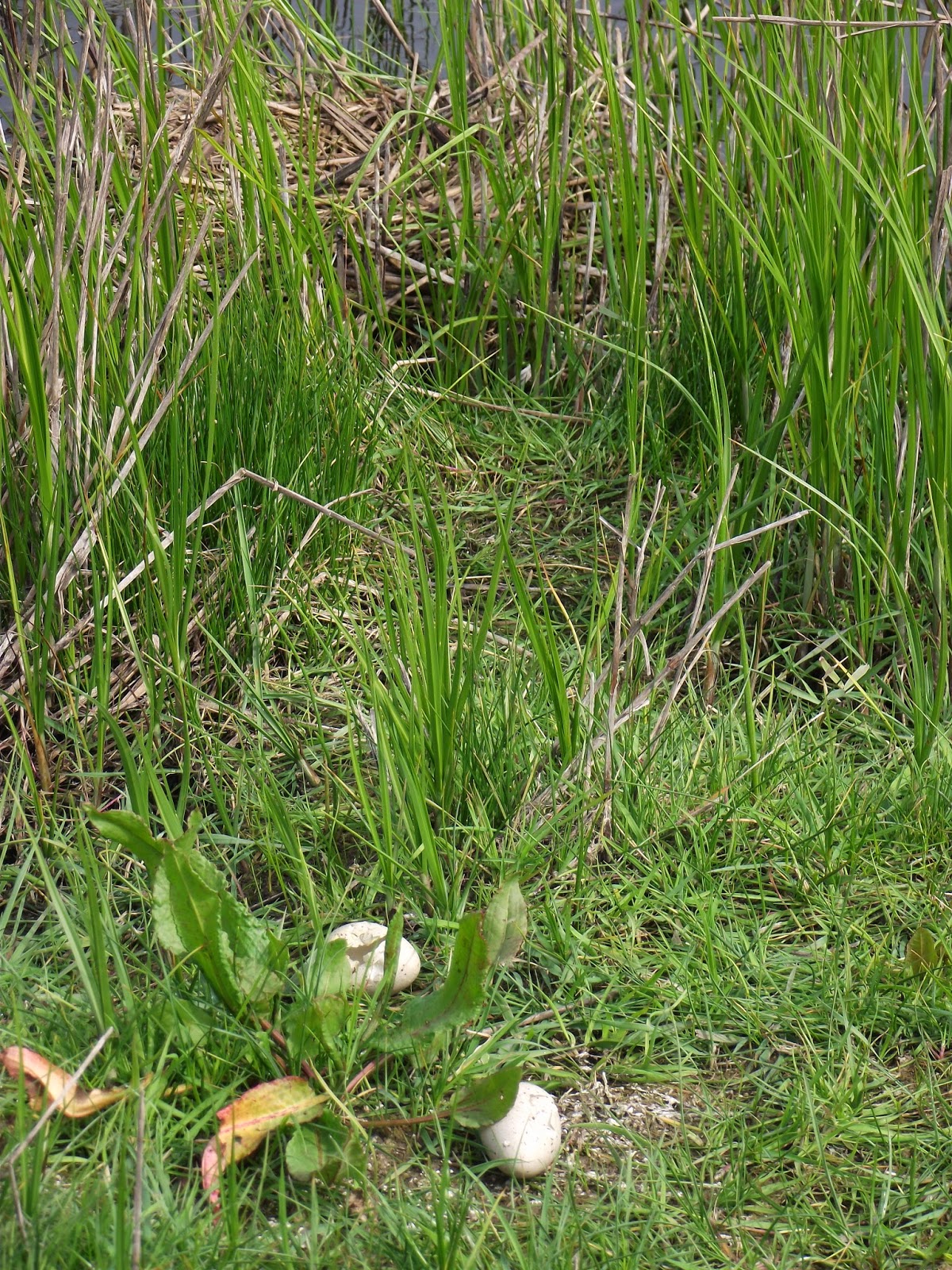 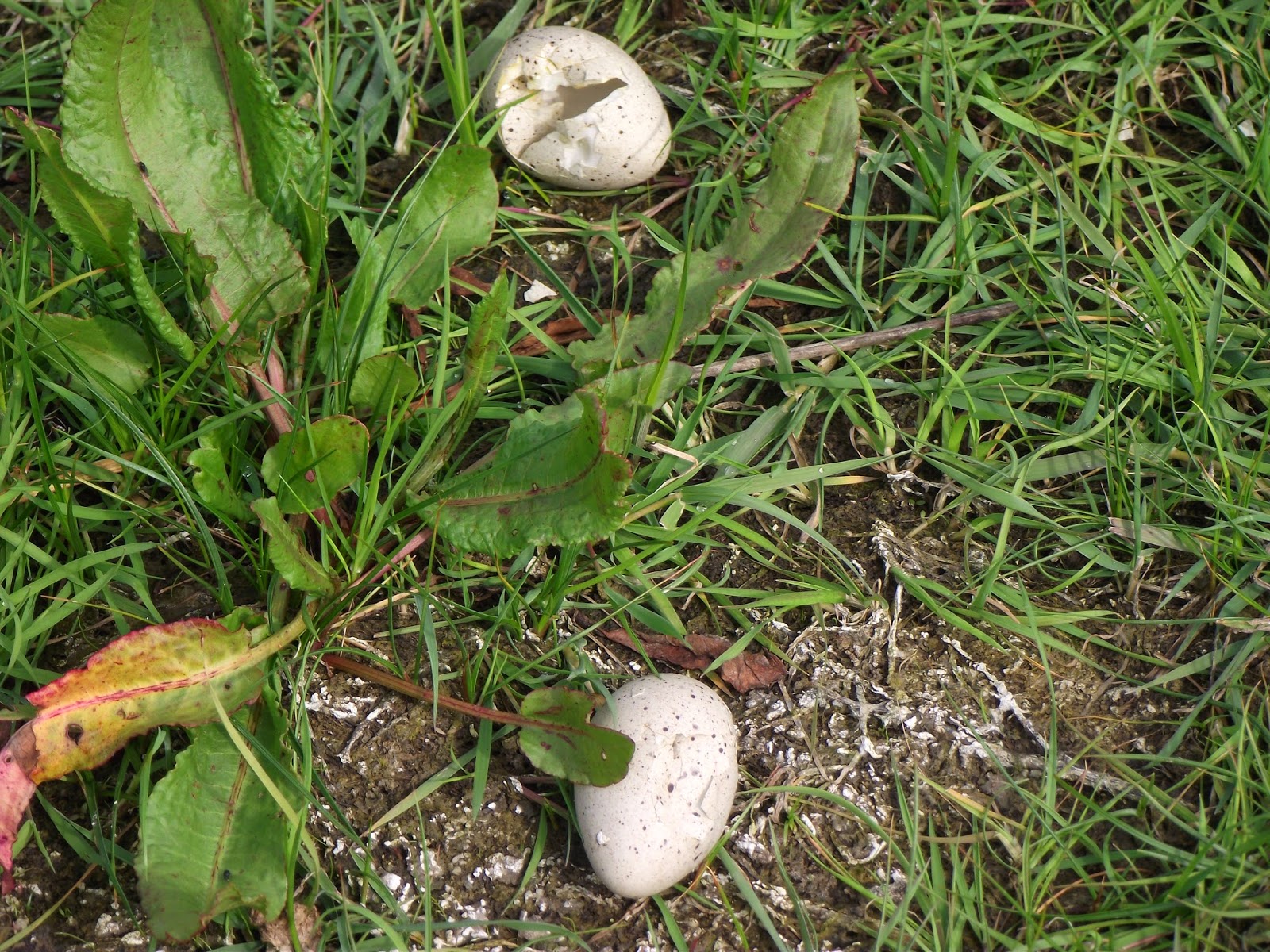 Amazingly, just half a dozen yards past the ruined Coot's nest I came across this Dabchick's nest on the other side of the ditch, where two chicks had clearly just hatched. One was hidden in the reeds and the other was still on the nest. Yes, I know it's hard to be seen but the white speck to the left in the nest is it's white egg tooth - try clicking on the photo once and it should come up a bit better. 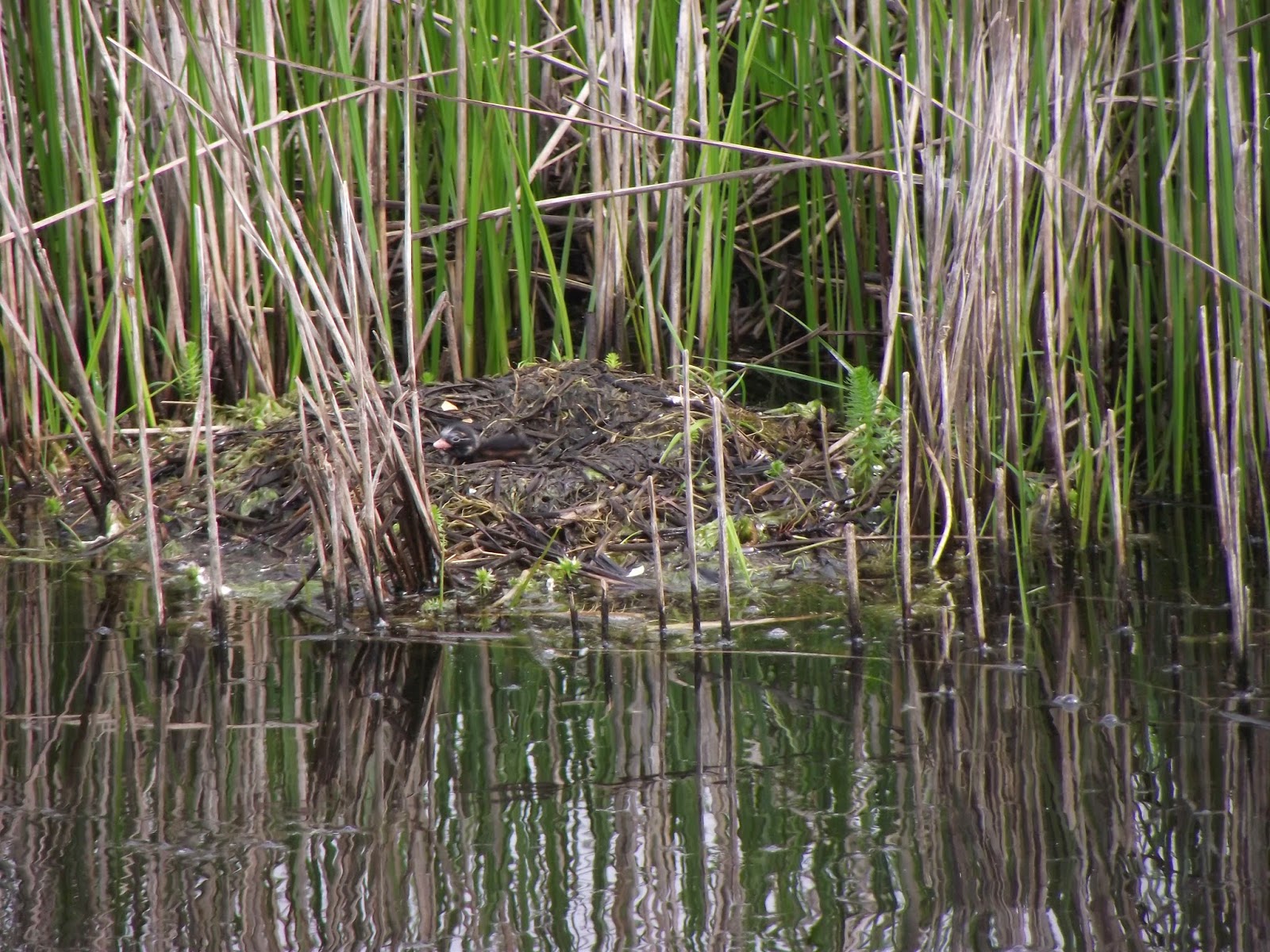 I made my way up onto the seawall and sat on the only seat along there, a concrete sluice set into the side of the sea wall. Many years ago this sluice used to control the flow of water from the Delph fleet alongside, through the sea wall and out into The Swale - these days it is redundant because the saltings have completely grown over the area of mudflats that the water used to flow across. I sat there for a while and listened to the Sedge Warblers and Reed Buntings singing alongside - although neither of them are what you would call good singers, and looked skywards for a while hoping in vain for that first Swift. 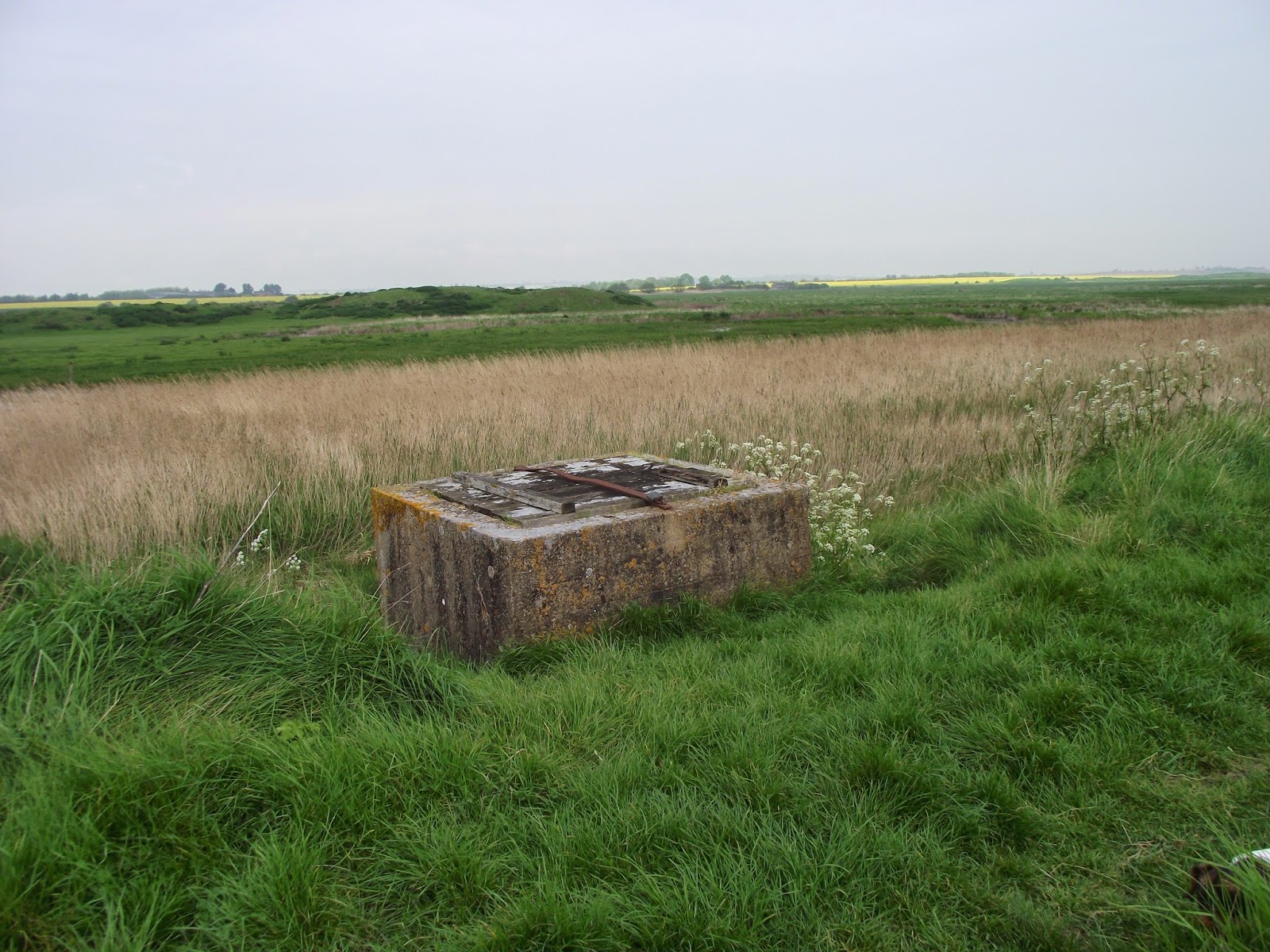 A little further along the sea wall I took a photo of this section of reed bed that I have been seeing most of the winter. An old line of fencing runs into the reed bed from the wall and somehow dead reed stalks have positioned themselves on it in this fashion. 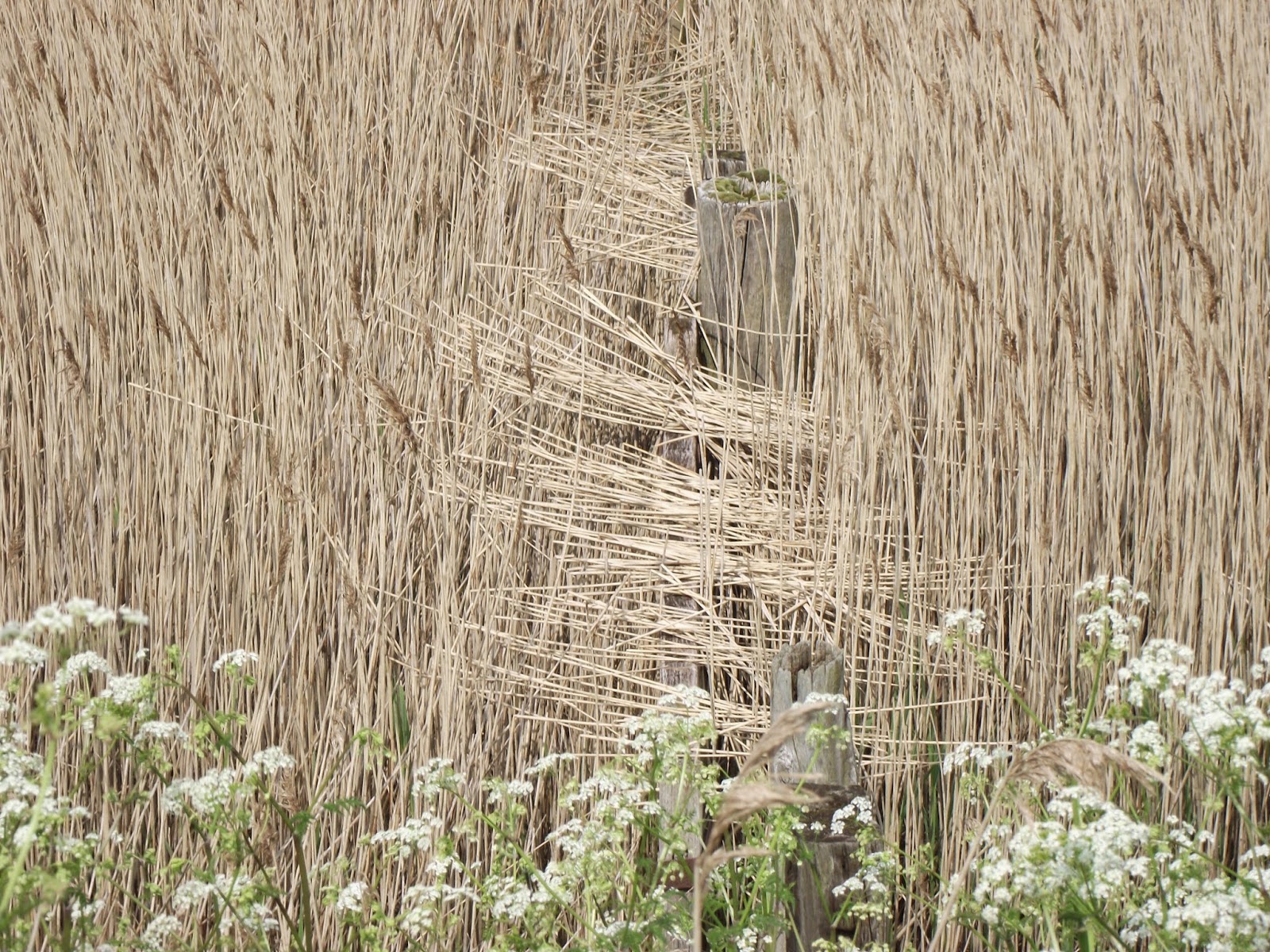 Also on the top of the sea wall, the Alexanders was in full flower and swarming as usual, in St. Mark's Fly, bang on target for St. Mark's Day April 25th. Many of the Sedge Warblers were feasting on these. 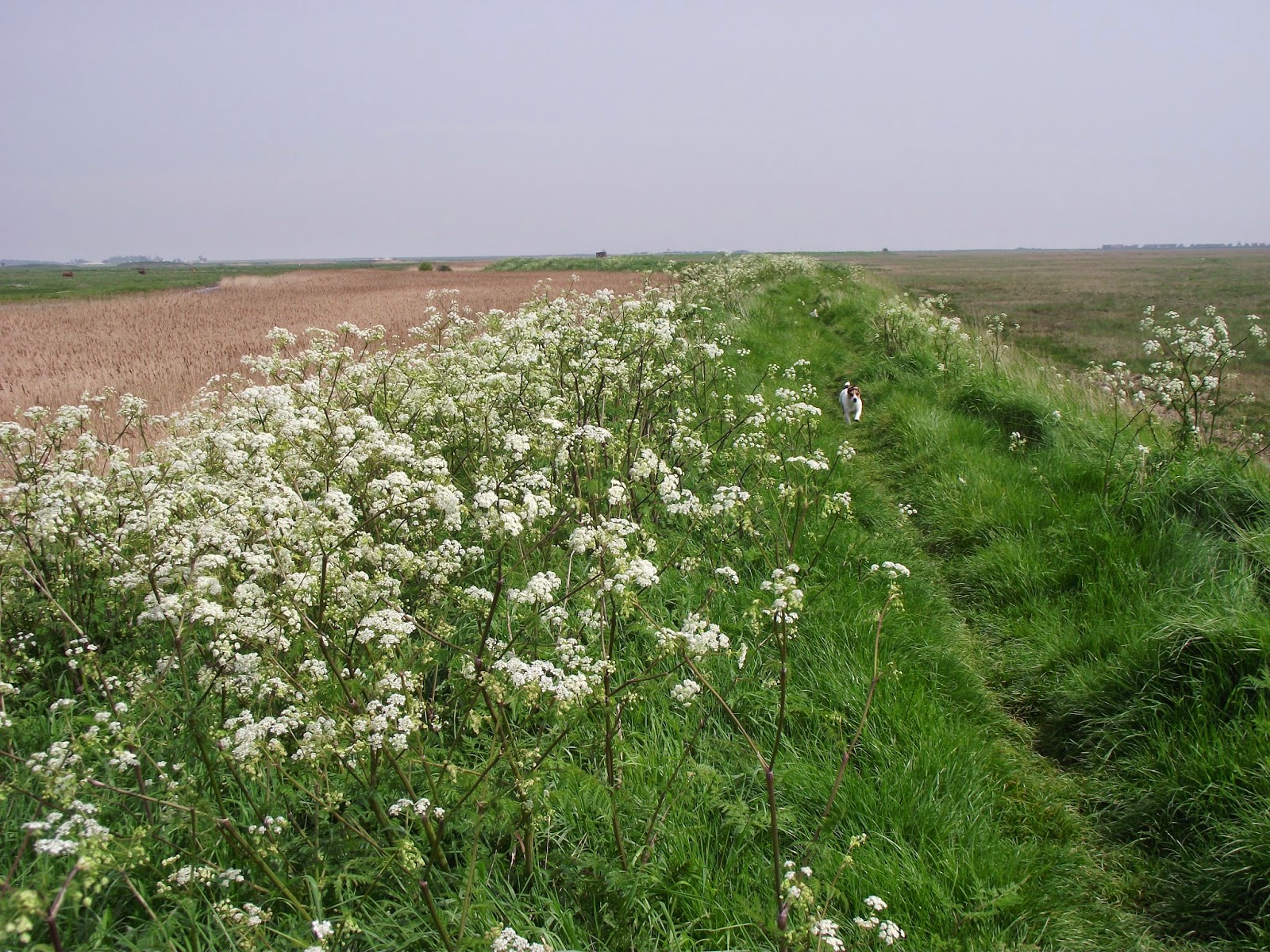 Walking on to the old Delph crossing by the Sea Wall hide, I was surprised to come across this nest/roost of tiny yellow and black-spotted ladybirds. They were about half the size of an ordinary ladybird and there were over a hundred of them. 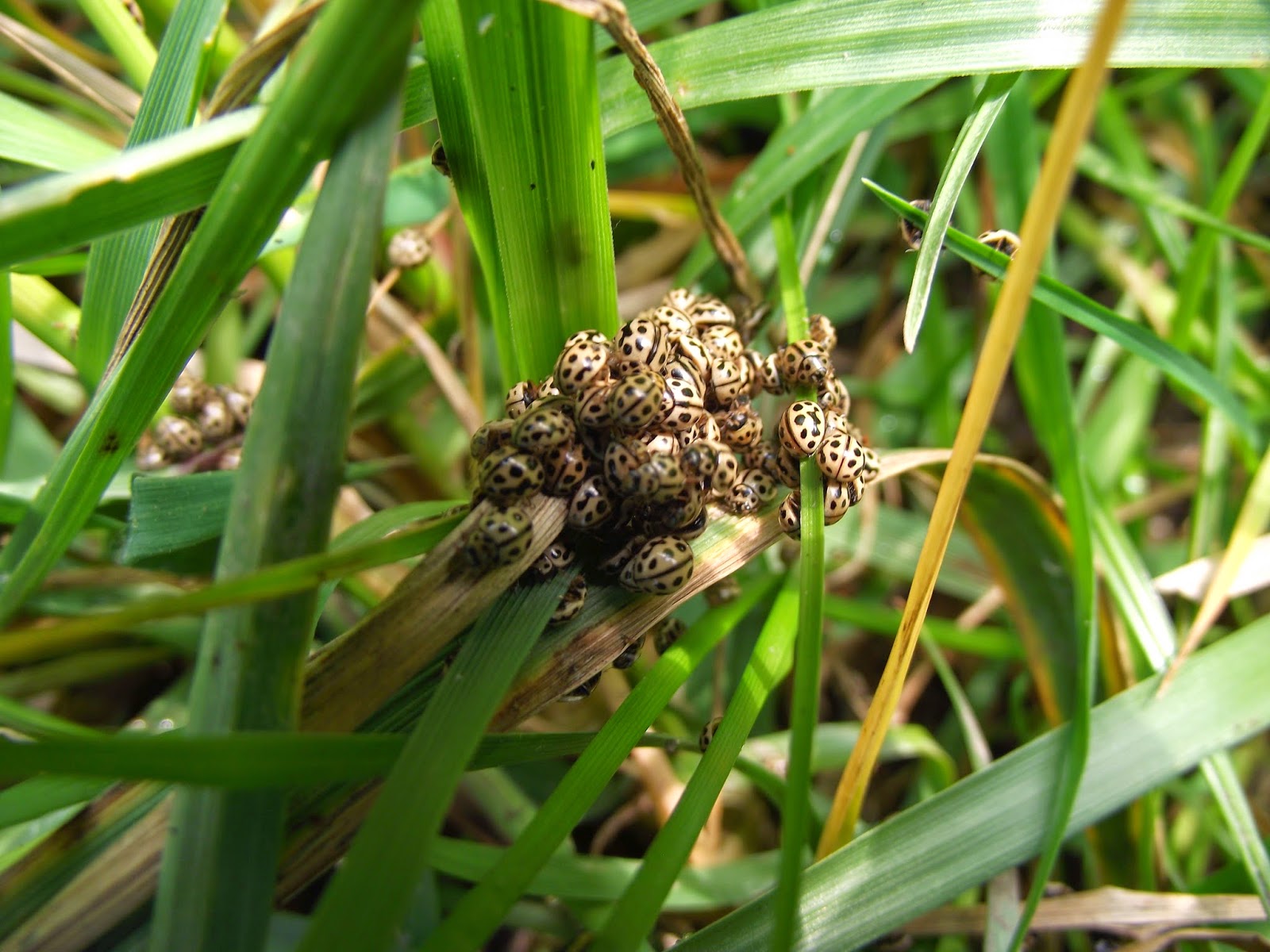 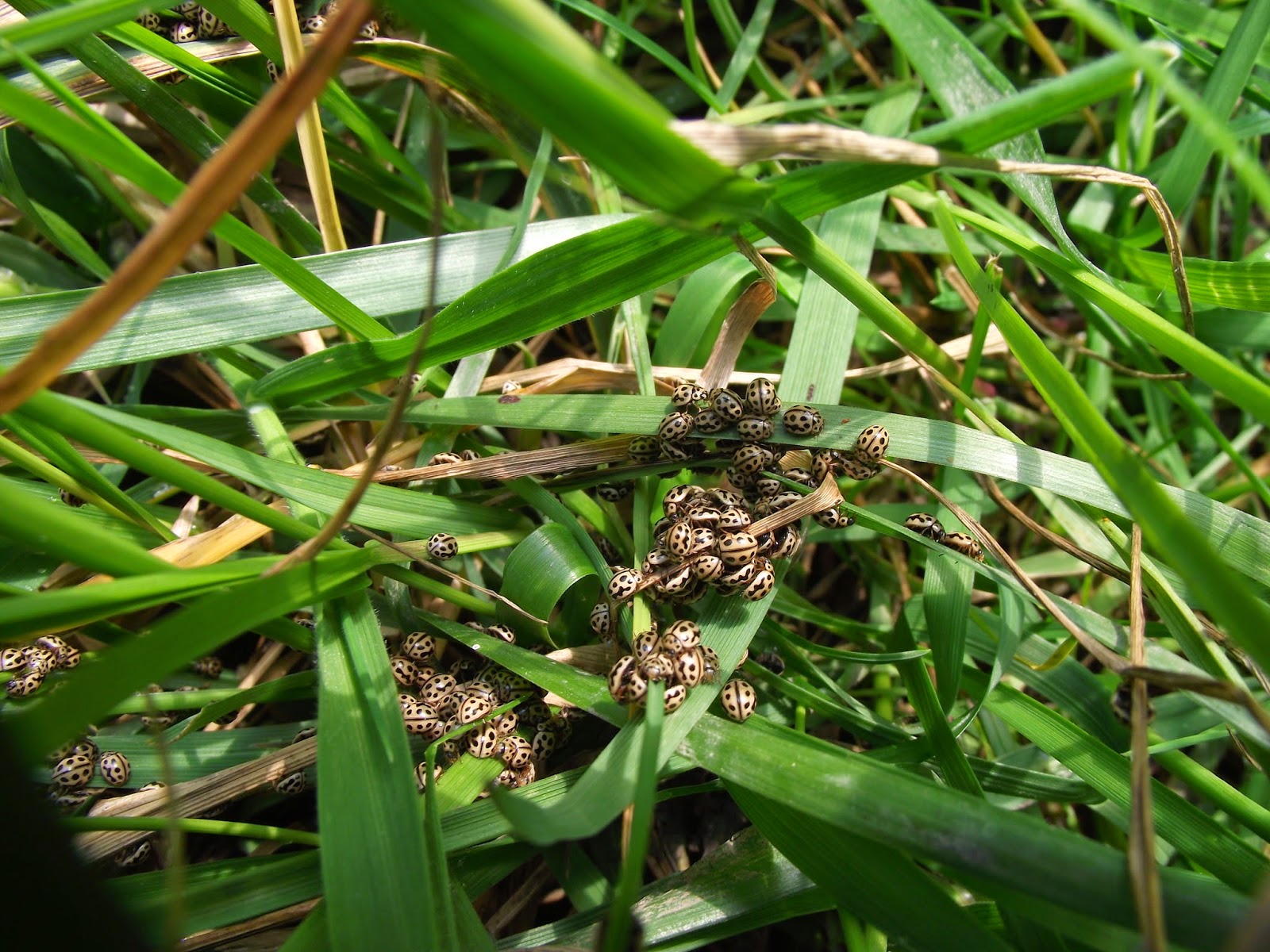 From the sea wall hide I first counted the large flock of Avocets in the Flood Field and the very low number of wildfowl left and then took these photos of Tufted and Pochard ducks in the Delph alongside. 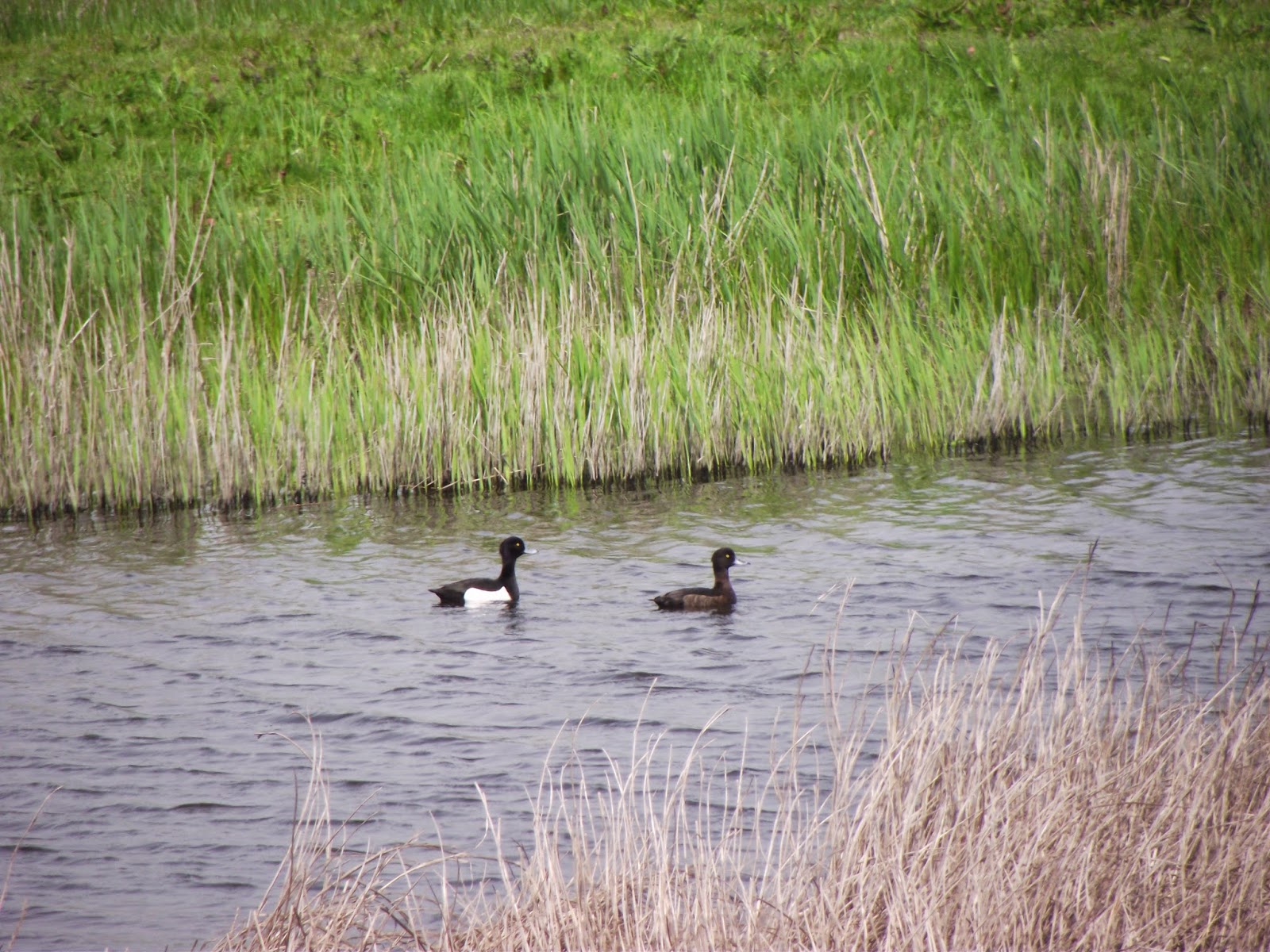 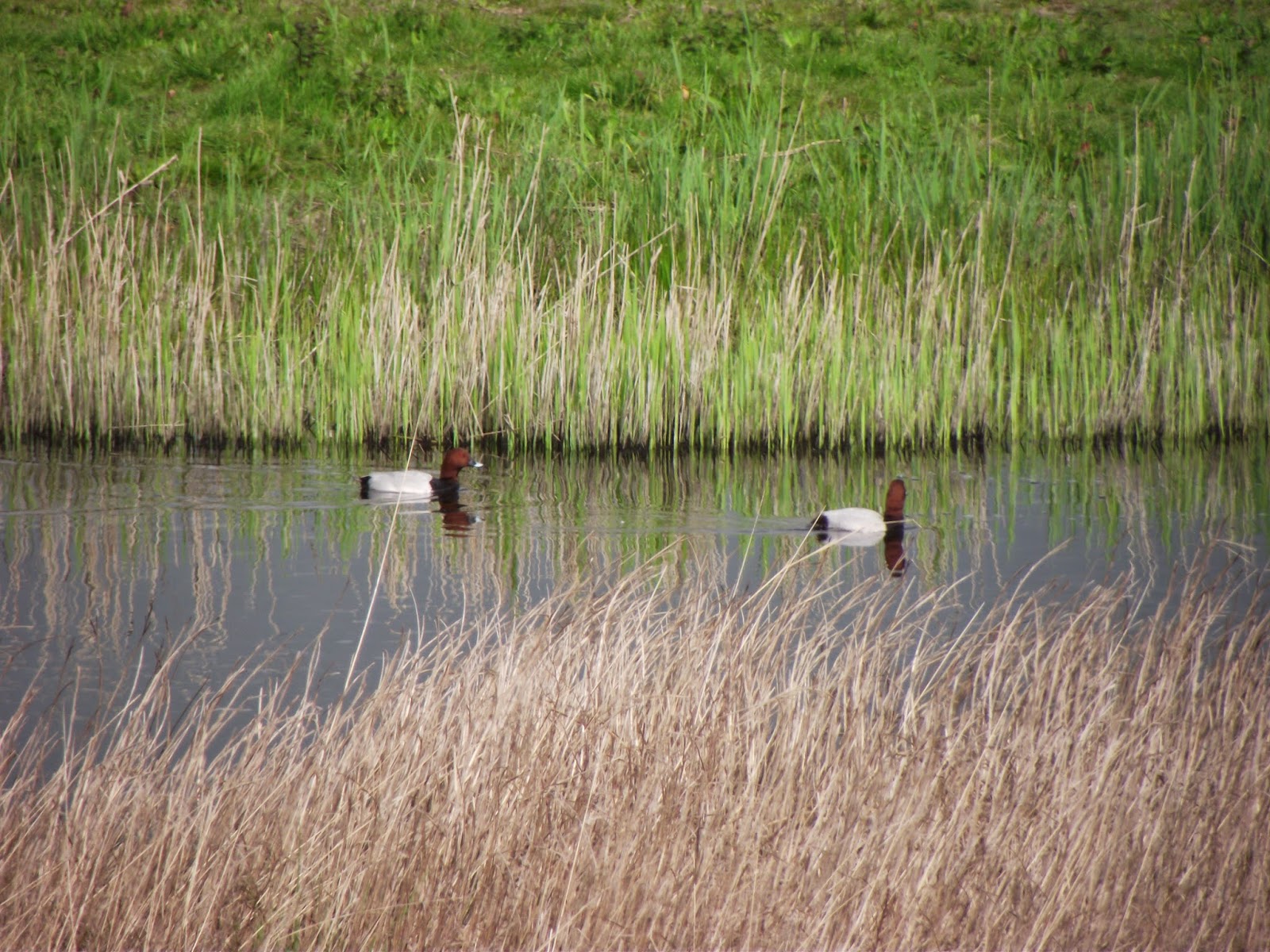 Finally, as I skirted round the edge of the grazing marsh, a Redshank got up close to me and alerted me to a possible nest. This was the result. Redshanks always make their nests inside a clump of grass but this one had had the top roof of grass obviously grazed off by the cattle nearby, leaving it's eggs exposed like a Lapwing's. But it was still incubating them and hopefully will be successful in seeing them hatch out of harms way. 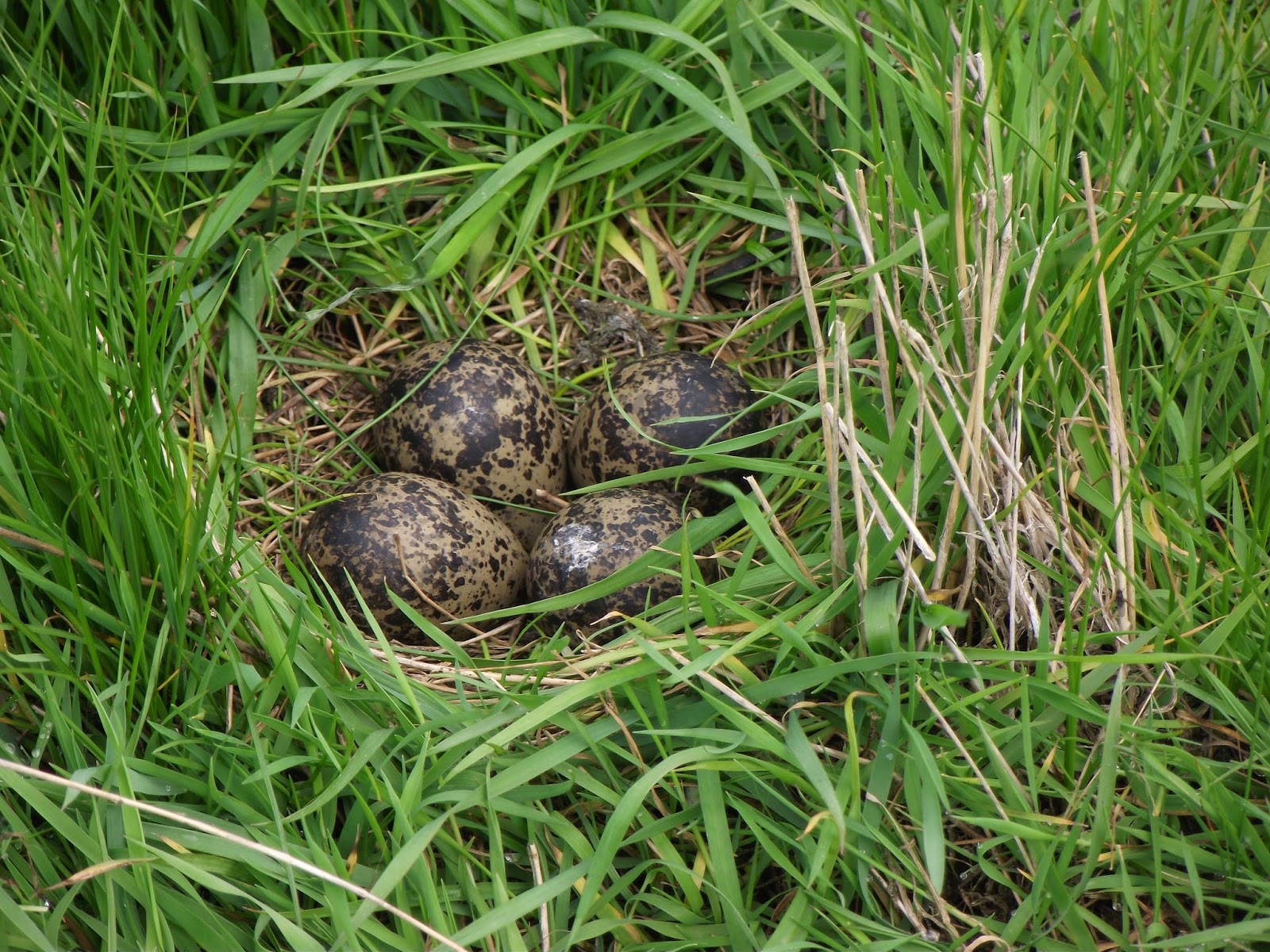