Well, after my "woe is me" posting of yesterday, things, as people said they would, changed dramatically today, as has the weather. Despite a strongish wind the day has been cloudless and very warm in the strong sunshine and the birds seem to have responded as well.
Below, from the seawall, is the view across The Flood which, although numbers have dropped by some degree, is still holding Mallard, Gadwall, Teal, Wigeon and Shoveler in small numbers. This morning there were also 150 Black-headed Gulls and 70 Avocets and several breeding pairs of Lapwings. 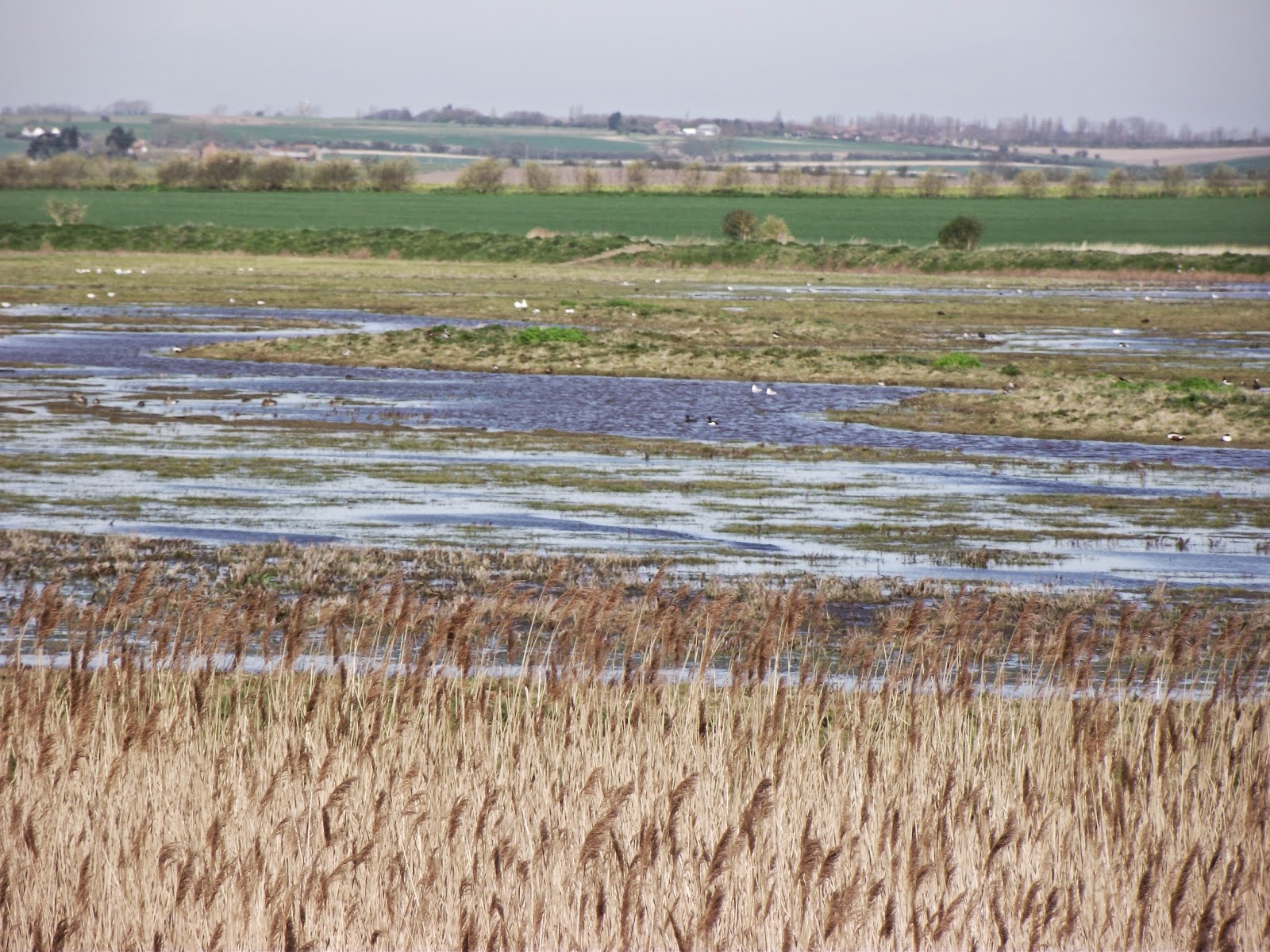 Looking left from the same spot and you can see the Sea Wall Hide and the wide, brown reed beds of the Delph Fleet that runs alongside the wall. I shall be checking along there tomorrow for some Sedge Warblers. 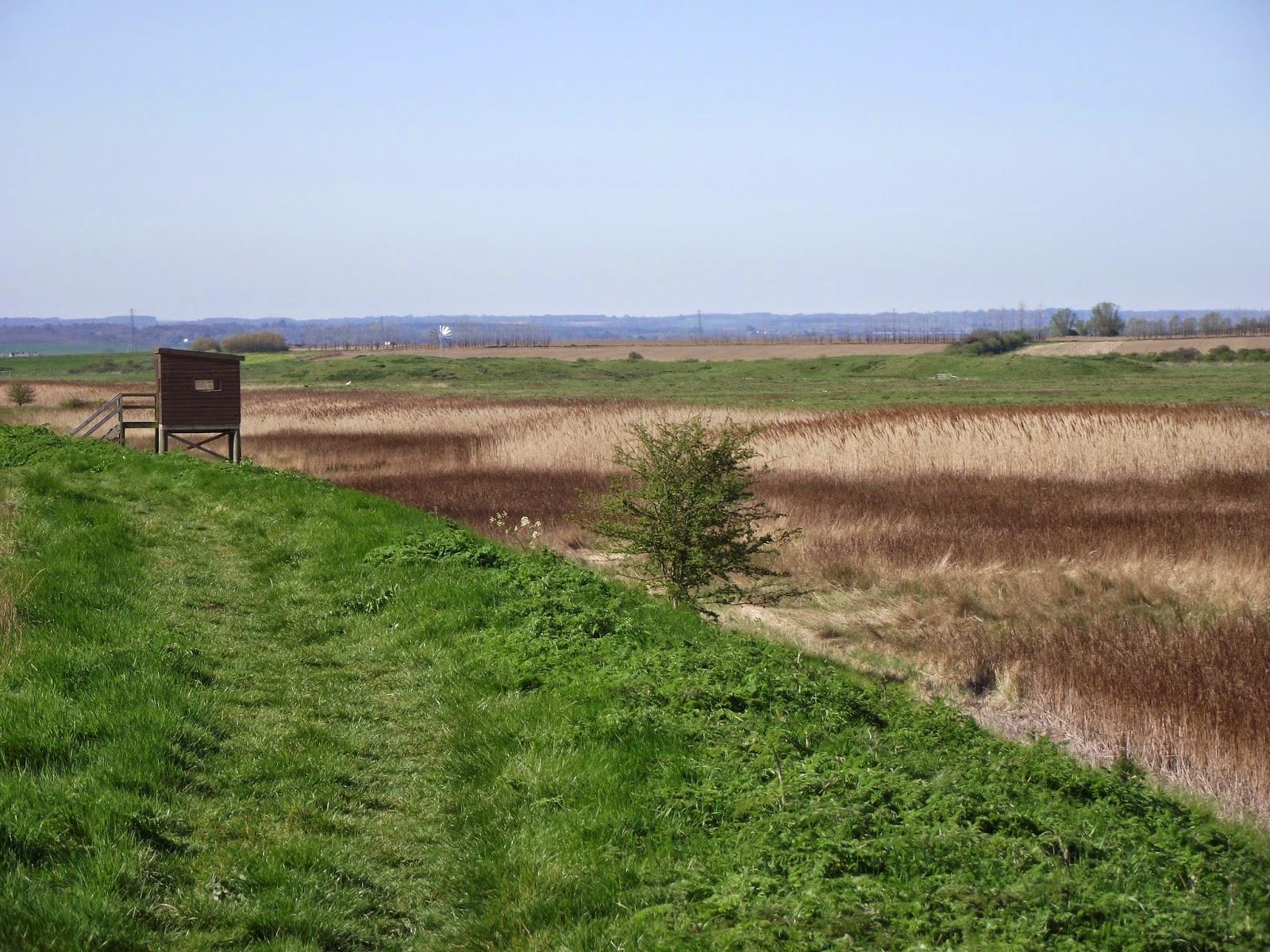 Today however, I went in the opposite direction and immediately I turned back on to the reserve there was the bird I've been looking for, a Wheatear, two in fact. OK my photo won't win any competitions but at least it records what I saw. I then got better and better because a few paces past the Wheatear and over flew 5 Yellow Wagtails - I felt like doing cartwheels but knew if I did I'd never get up again, so settled for a rather loud "yesssss".. 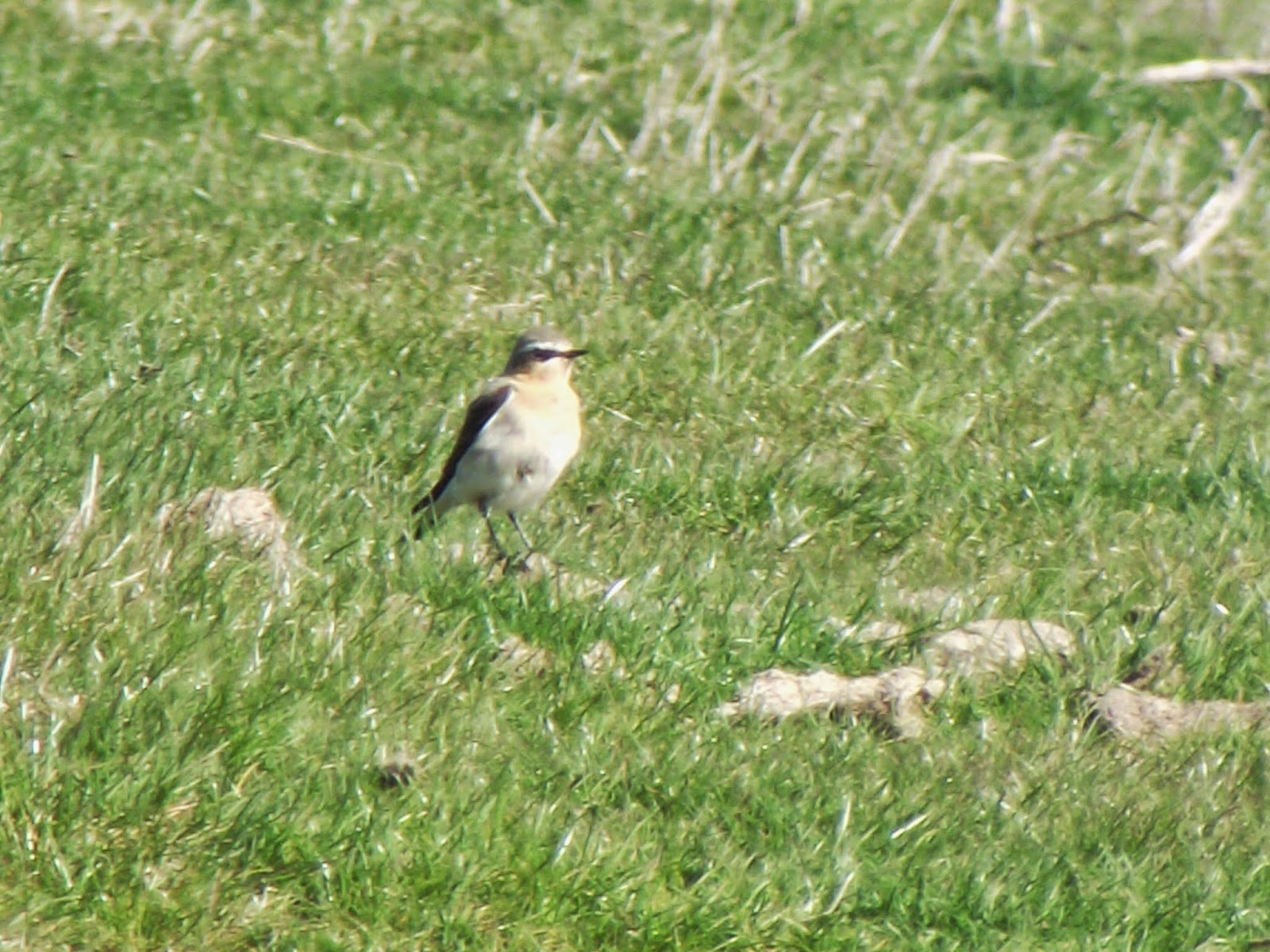 On the farm land alongside, one of my favourite Spring events is starting to take place, the rape is starting to come into flower, turning all that drab green-ness into golden yellow and provide a much needed food source for hungry bees. 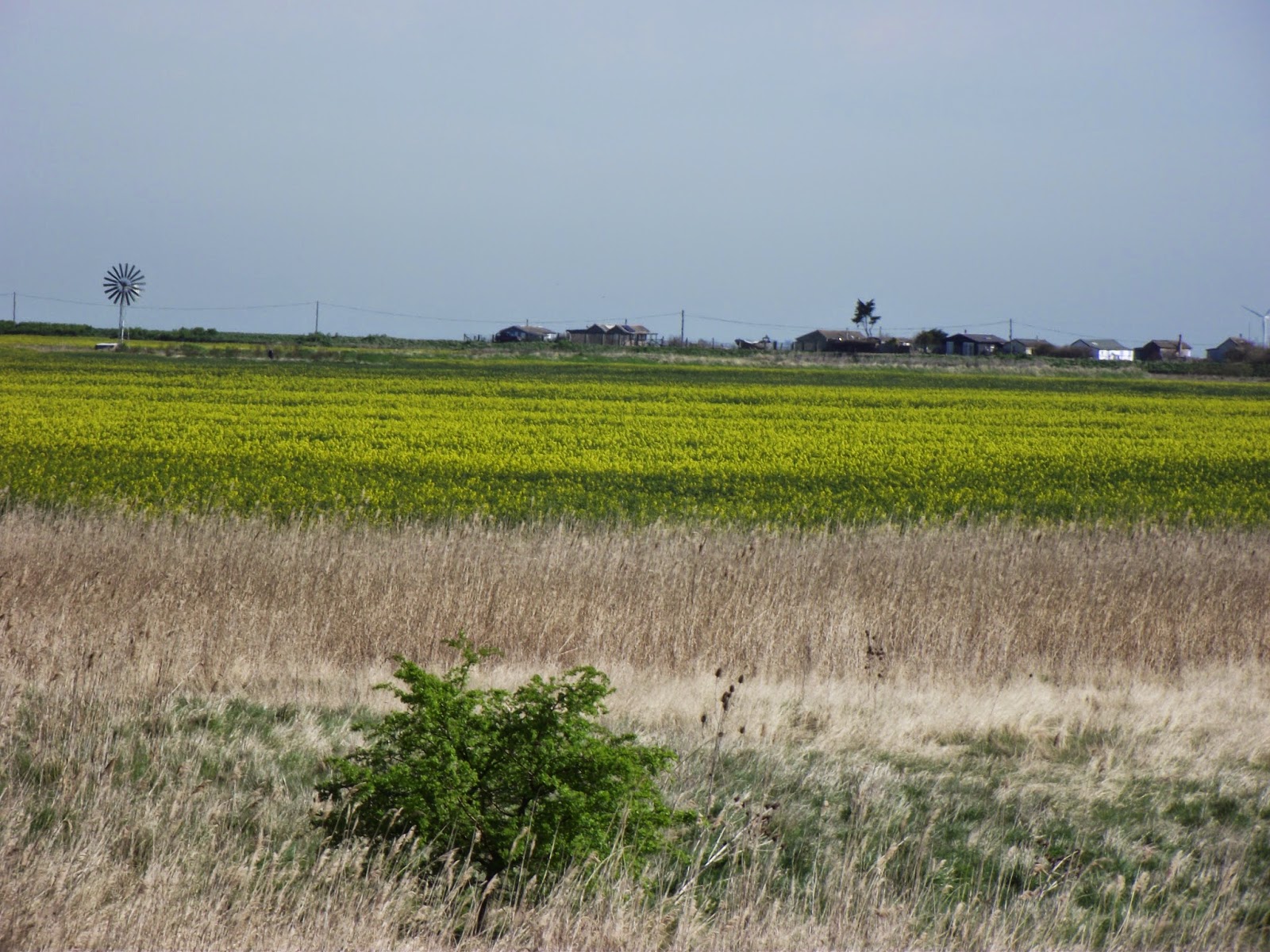 The first of the cattle and their new calves are also out enjoying the sun after wallowing for a few months in the muck of the stock pens. How joyful that must be for them, despite the fact that decent garss is in short supply at the moment. 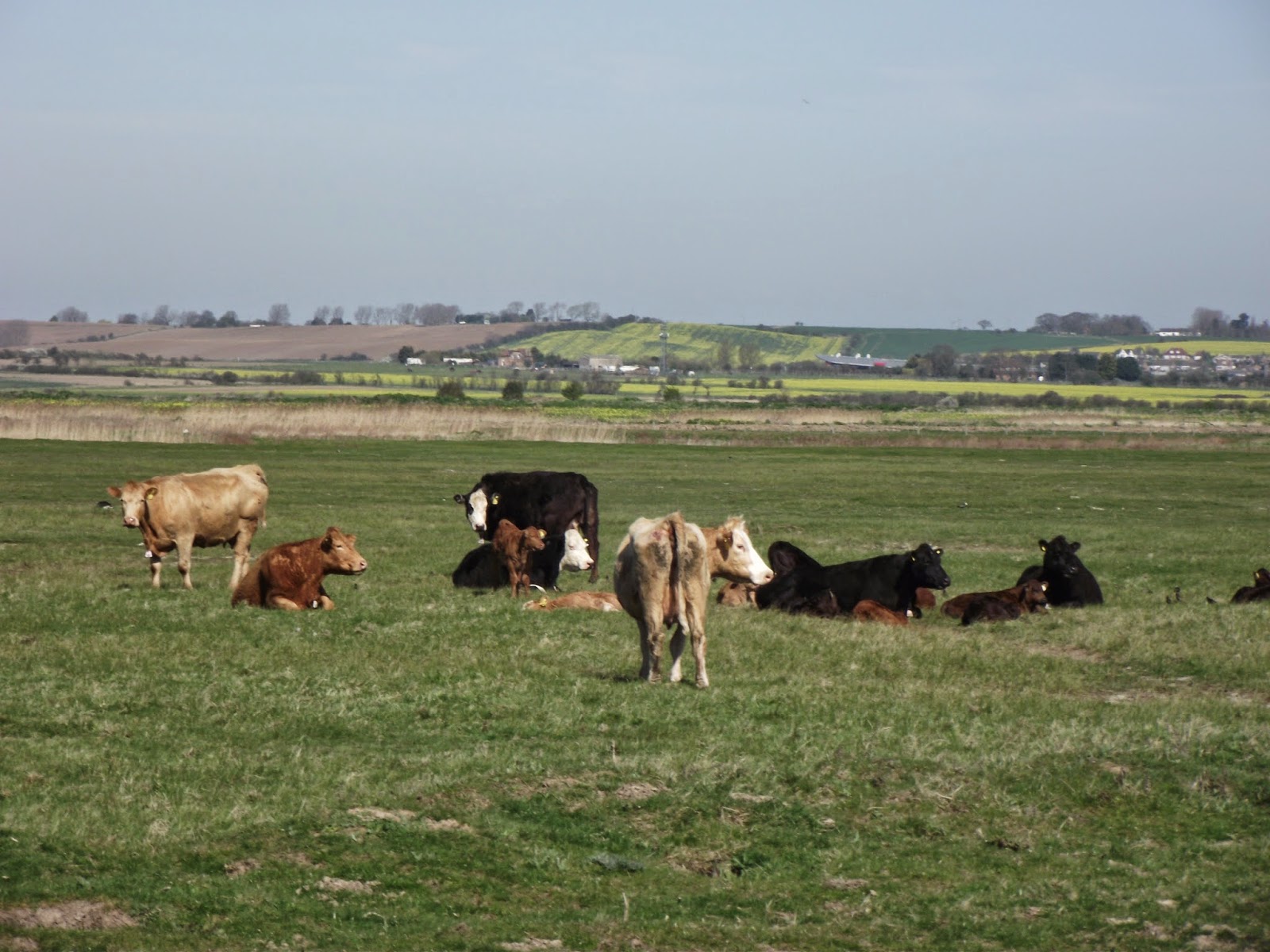 And finally, to complete the day's sudden leap into Spring, I found not only my first Coot's nest with eggs but also a brood of Coot chicks - what a day!