Where have all the birdies gone?

I've waited a week or so since my last blog to see if the bird numbers improved on the reserve but unfortunately they haven't. I have been thinking that perhaps I wasn't getting about enough, or looking hard enough but earlier this week I bumped into a birdwatcher from West Kent whose first words to me were "what have you done with all the birds". The answer was "nothing, there hasn't been any birds to do anything with." As I've said on numerous occasions, the reserve will only come briefly into it's own around New Year, when any serious rainfall has begun to flood it up. Even then though, we don't get anywhere near the number of wildfowl that we used to get, especially Wigeon. Over the last few years they, and many other ducks, are to be found further round The Swale, in huge numbers, enjoying the safety provided at the Elmley NNR. Here many years of hard work and expense are now paying dividends as the birds enjoy the huge acreage of marshland and nearby Spitend Bay.
So it's deathly quiet on The Swale NNR but I'd settle for that if it means avoiding the ridiculous scenes that took place at Dungeness this week where a very rare Acadian Warbler from America was found. At one stage that resulted in some 230 parked cars and over a thousand twitchers circling the poor weary bird and when it moved to a nearby garden, that and it's owners were also besieged. One thing's for sure, if I was to ever surpass myself and recognise such a rare bird, I wouldn't be rushing to any pager in order to attract such a stampede of oddballs to my patch.

Anyway, birds or no birds, in this tranquil, sunny and beautiful autumn weather that we are currently experiencing, the reserve looks quite stunning and it's a pleasure to be there just for that. I arrived there this morning at first light and with an air temperature of 4 degrees we were only marginally above the first frost, leaving the grass covered in a heavy dew. I made my way across to the sea wall hide and with no wildfowlers present, stood in complete solitude and watched the sunrise slowly evolve over Shellness Point. 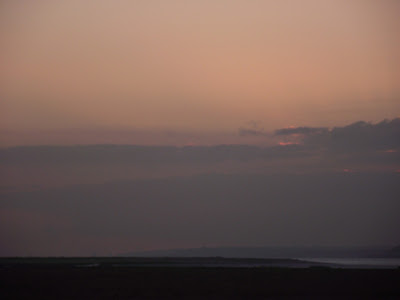 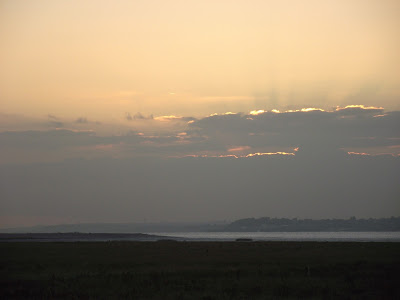 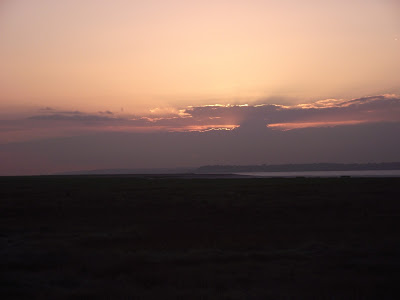 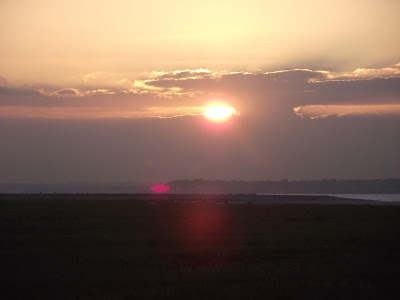 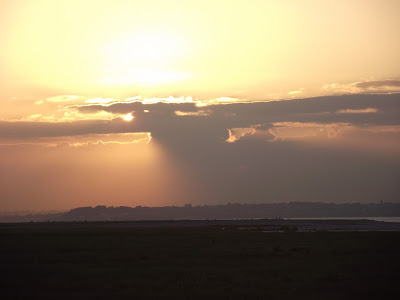 As the sun eventually escaped the distant cloud and rose into a clear blue sky the temperature slowly began to rise and I begun to make my along the sea wall. Looking backwards, the Delph Fleet and it's reed beds stretched out and snaked their way for a mile or so along the base of the sea wall towards Harty church. 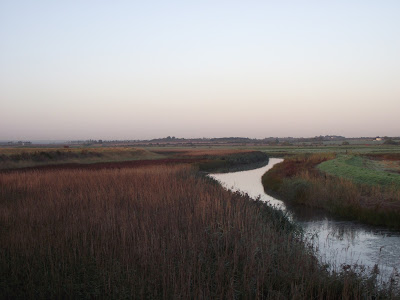 I couldn't resist taking a photo of this lone dandelion seedhead on top of the sea wall, you can see the dew glistening on the grass stems behind it. 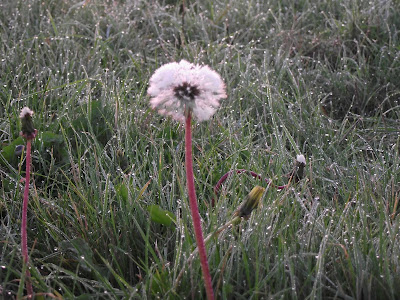 I spent some time making my way across the reserve and then the adjoining RSPB fields, to eventually link up with the Public Footpath/track that runs between Muswell Manor and Elliotts farm. Although it isn't all covered in concrete, many of us locals know this track as "the concrete road" and by the time that I was walking along that in the shelter of the trees and bushes, it was really warm. It's not a regular walk of mine and so, as you can see, the dogs go on ahead, enjoying whatever new smells that they come across. The fox hunt were along here in the week and so they could probably detect where the pack of hounds had passed by. On the crest of the road in the distance, there is a large wooded area that was planted as game cover some years ago, here I had the pleasure of watching some birds at last. Several Chiffchaffs, plus Chaffinches, Robins and best of all, two Goldcrests, were all busily working their way through the bushes as I made my way past. Sheer bliss in the increasingly warm sun, if only we didn't have to have a winter. 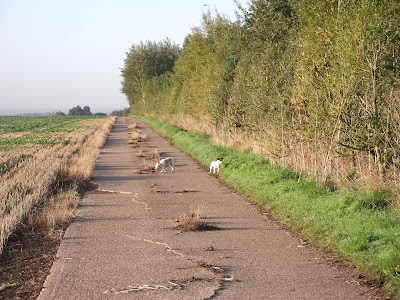