After yesterday's appalling weather, it was a real joy this morning to get up at 5.30 and see clear, star-lit skies and no wind! I say appalling weather because severe gales, rain and bitter cold temps. are my idea of hell, but judging from some bloggers yesterday, who clearly love watching distant birds skipping over mountainous seas, yesterday was almost orgasmic - we are all different!
I arrived at the reserve barn at 06.30 in two thirds darkness, a temperature of minus three degrees, our first frost of this winter and only the distant eastern sky was showing some brightness, note the twinkling lights on the mainland and how dark the marsh ahead was. 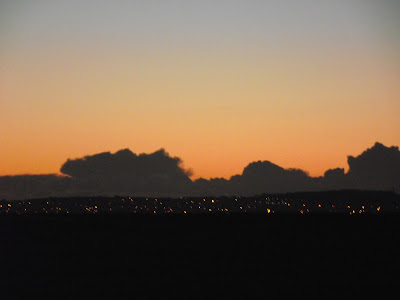 As I began to walk away from the barn and the willows around it, about a dozen Teal sprung up from the ditch under the willows, they have a thing about being under those willows and are there every year. After that, as I wound my way across a darkened marsh, heading towards the sea wall and the quickly increasing light, the geese in the Flood Field, several hundred yards way, knew I was about and began to call urgently. Arriving on the sea wall, a scan as best as I could in the poor light, showed that there were no wildfowlers out on the saltings, perhaps the clear sky had deterred them, not the best for that activity apparently.
That turned out to be a godsend though, because for some reason today, birds were more numerous, especially wildfowl. The eastern sky continued to brighten and the gloom decreased, birds were calling, including the "squealing" of Water Rails in the reed beds alongside the sea wall. Waders, led by Curlews, were calling like mad along the mudflats of The Swale and Reed Buntings flitted out of my path on the sea wall and disappeared into the reed beds between the wall and the marsh.The 150 Greylag Geese and 5 White-fronted Geese suddenly lifted up off of their overnight roost in the Flood Field and began to drift out over the saltings, thank gawd there were no wildfowlers about this morning. As I made my way across and around the back of the reserve, it was obvious that there were more wildfowl about than have been for some time, not huge numbers but a good variety - from the "S - Bend Ditch" came the following:-
10 Teal, 30 Wigeon, 10 Shoveler, 70 Mallard and 2 Snipe, the most ducks I've seen for ages! And by then, an hour after I'd arrived, the sun peaked out from the hills of the mainland. Other birds seen were Fieldfare, Pied Wagtail, Lapwing, Peregrine Falcon, Wren and Blackbirds - nothing spectacular but all enjoyable to me. 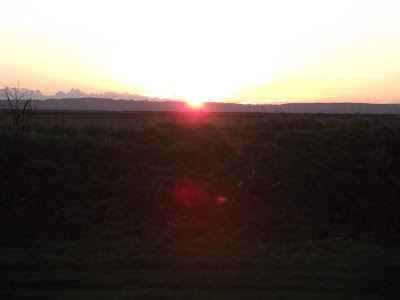 Here you can see the frost in the foreground as I arrived back at the barn at 07.45, it had been a really enjoyable early morning walk round. 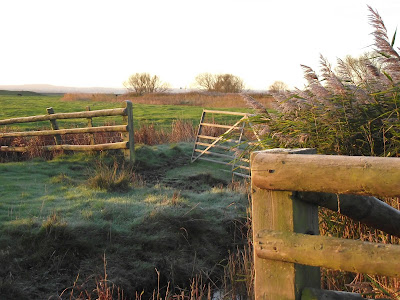 This afternoon, the weather was so good that I went back to the reserve and below you can see the willows next to the barn that the Teal like to get under. 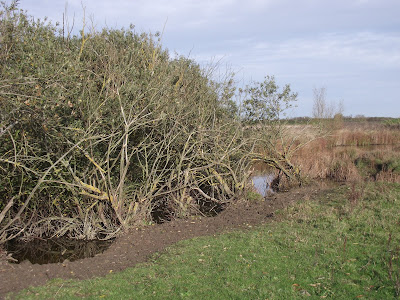 The geese were still there, as they are most days, and by getting no closer than a hundred yards I managed to walk round them and not disturb them, guess they get used to seeing me and the dogs. 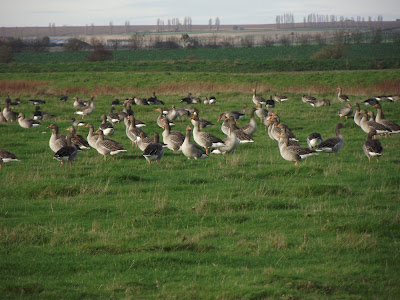 It was much quieter bird-wise this afternoon, than this morning ,but it was a lovely time to be out and about and I stopped to talk to a couple of walkers and then a birdwatcher. Apparently there was another mini-seawatch going on down at Shellness this afternoon, well at least the weather was nicer than yesterday!
As I returned home along the Harty Road, the first of those most least likeable shooting types were beginning to arrive, the duck pond shooters! These are the people that pay to walk a very short distance from their cars, sit round large, man-made ponds on the marsh and shoot ducks being lured to the ponds at twilight by huge quantities of regularly spread corn - people that give shooting a bad name!
Posted by Derek Faulkner at 17:33