Yesterday, Friday 31st August, after sleeping poorly as usual, I got up at 04.30 and was on the reserve at first light 05.30. The day was forecast to be sunny and warm and indeed it did turn out that way, very warm and sunny to be exact. However, when I arrived at the reserve, grey clouds were drifting across the sky, a light mist was rising from the ditches, it was a chilly 9 degrees and the dew in some of the hollows hinted at possible frost.
A few small parties of duck flew along the sea wall fleet, flying just above the mist they turned, flew back a few yards and then quickly dropped into the fleet. Further across the reserve the sounds of geese calling caused me to look through the binoculars at what were a small gaggle of Greylag Geese rising up from their overnight roost in the middle of the marsh. In the reed beds along the sea wall fleet one or two Reed Warblers still called but most have already left for their winter quarters in Africa, they arrived late this year and most have left early. Those that did arrive were in much lower numbers than previous years and as a result the breeding records showed over 50% less pairs than the last couple of years.
It was one of those early morning visits that was totally serene and perfectly silent and I meant to enjoy the quietness and solitude of both the reserve and Harty in general yesterday, because today meant I have to share it for the next six months with the wildfowlers. The wildfowl shooting season always begins at midnight on the 1st September and the silence of dawn and dusk will now regularly be broken by the sounds of gunshots. I have no problem with true wildfowling, it's one of the hardiest forms of shooting and requires a lot of stamina and skill, I just begrudge, perhaps selfishly, having to lose my little bit of early morning serenity, not have it all to myself.
So, after yesterday morning's early start, I was back on the reserve this morning at 05.15 to see how many wildfowlers were seeing in the start of the season, only trouble is, as you can see below, seeing wasn't exactly an option. It was only 7 degrees, there were clear, light blue skies beginning to show above the marsh, but also a mist that obscured forward vision up to height of about 20 feet. I heard a couple of shots be fired the other side of the sea wall so knew that somebody was there but couldn't see who fired them. 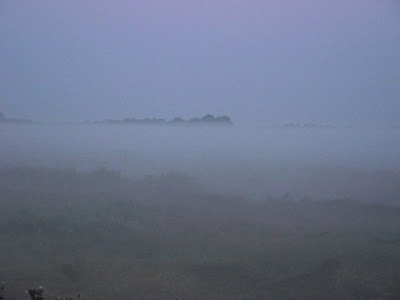 Eventually the sun began to appear above the eastern horizon and was pretty much the only indication of where the land and the sky met. 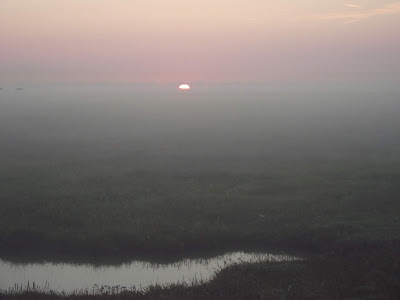 Few wildfowl were moving flying about and that was obvious by the fact that I only heard two more shots for the rest of the time I was there and as the sun began to rise into the sky, the mist briefly thickened again. Below is the top of the sea wall, to the right is the bird watching hide on the landward side and to the left are the salting where the wildfowlers were. 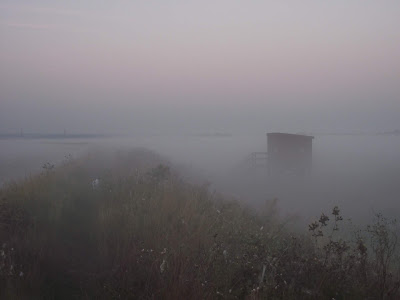 Gradually the sun began to increase in power and colour and the whole marsh begun to look very picturesque. I was also able to eventually see and talk to the seven wildfowlers as they packed up for the morning. They were disappointed at the lack of first day shooting but like me, simply enjoyed being there to experience such a lovely sight. 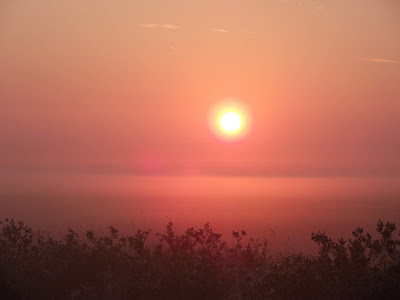 All along the sea wall, on what seemed like every clump of grass, thousands of cobwebs had been highlighted by the damp and the mist. 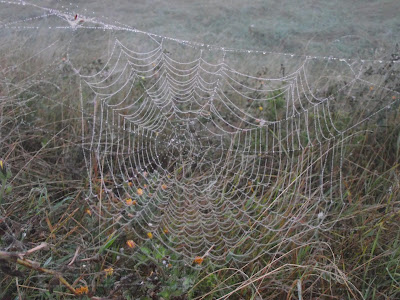 As I walked back across the marsh to return home, it was 7.00 but the mist was still as thick and the cattle begun to appear as they made their way past me. It had been a lovely September morning. 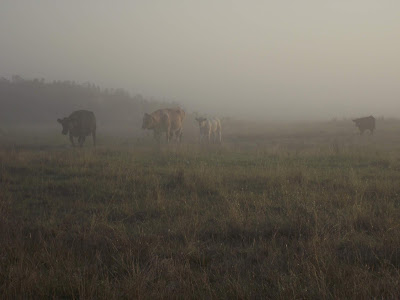